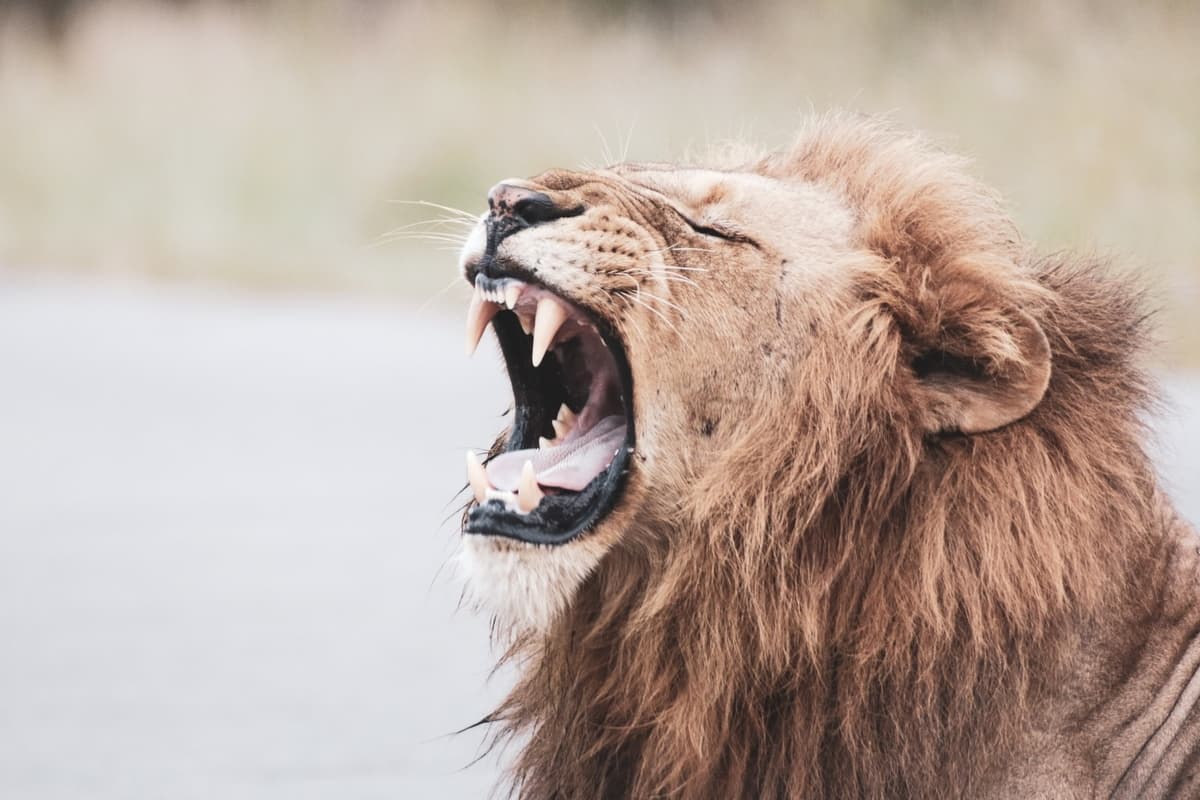 We are all familiar with the saying: “do not try to fight a lion if you are not one yourself”. Lions are fearless and powerful, and that’s why other animals in the wild will try to avoid them for their own safety. However, despite being the most dominant predators in their environment, a few animals will try to eat lions.

So, what eats lions?

The list of what eats lions is short. Being apex predators, lions are the ones who eat other animals, and not vice versa. However, a few predator animals are known to attack and eat lions. Besides humans, hyenas, crocodiles, leopards, and wild dogs are animals that have been noted to attack and kill lions.

We want to point out that no animal hunts lions to eat them. The fights of other predators and lions happen mainly due to the nature of competition. Food and territory are essentially the main reasons for conflicts in the wild. Eating a lion is merely a bonus.

A fully-grown lion doesn’t have to worry about being attacked by other predators. There is a legit reason why they are commonly known as the kings of the jungles.

Lions are strong, powerful, and dangerous predators, and animals know better than to go after an adult lion.

However, a few predators that dare to attack lions usually have to wait for the perfect moment in order to execute their cunning plan successfully.

Hyenas and lions are eternal enemies of Africa. These two predators will try to steal food from each other regularly.

Despite both animals being fine hunters, sometimes it is easier to steal food from your competitors than go hunting.

Also, both species are highly territorial, and they’ll often express aggressive behavior towards the opposite side if their territory is crossed.

However, lions are a much more dominant species, and hyenas would almost never dare to attack an adult lion. They’ll especially avoid male lions.

Yet, hyenas are smart pack predators, and they’ll seize the slightest opportunity to kill and eat lions that are old and weak, as well as lion cubs.

I wrote an entire article dedicated to lion-eating hyenas and the fierce competition between two predators.

The same as lions, crocodiles sit at the top of the food chain, and only a few animals eat crocodiles.

Crocodiles, unlike hyenas, do not have territorial problems with lions since they spend most of their lives in the water.

In general, lions and crocodiles respect each other’s power and strength, so they’ll not fight unless necessary.

Crocodiles are ambush predators, and they’ll try to kill and eat lions by surprise.

For example, when the lion is drinking water or cooling off in shallow water. Once it grabs its prey, a crocodile then goes into deep water to finish the job by drowning the animal.

However, it is worth mentioning that this case is not as often, and crocodiles would mainly attack other not as dangerous animals like lions.

Still, the main reason for fights between these two animals is over animal carcasses. There are times in the wild when food is scarce, and fights over the dead animal body can last for hours.

Another enemy that lions encounter in the wild is their relatives, the leopards. For the most part, leopards would avoid adult lions knowing they are much weaker than their Felieda cousins.

Besides that, unlike lions, leopards are solitary cats, and for the majority of their lives, they are roaming the wilderness on their own.

No matter how strong the leopard is, it stands no chance against a pride of lions.

However, it is not unknown that leopards would attack and eat lion cubs given the opportunity. For instance, when cubs are left alone and unprotected, a leopard would seize the chance, attack, and kill them.

Cutting down the potential competition may be beneficial for survival in the near future.

When lions and African wild dogs meet in the wild, most of the time it ends badly for much smaller carnivore predators.

Still, wild dogs are smart, and they will not put on a fight they have no chance of winning. As a result, wild dogs stay away from male lions and would only attack an isolated lioness. (as long as they have strength in numbers)

Also, like all other lion enemies, the wild dogs will try to kill and eventually eat lion cubs whenever they get the chance to do so.

As a consequence, being under constant attacks by different predators, only 1 out of 8 lion cubs reach maturity.

However, lions are also not merciful to other predator juveniles. And they will kill the puppies of their enemies purely as a way of displaying dominance.

Besides that, the kings of the jungles would frequently steal food from the wild dogs, considering the fact their hunting percentage is one of the highest among all carnivores.

Humans usually do not eat lions. However, massive lion slaughtering by humans happens quite often. In fact, humans are the main lion predators by far.

Because of poaching and trophy hunting, today, lions are listed as endangered species.

No more than 20,000 lions are left in the wild, with a reduction of 60% over the last two hundred years. During the late 19th century, the number of lions was estimated to be over one million.

Unfortunately, wildlife hunting, including lions, is allowed in places like Botswana, South Africa, Zimbabwe, and Namibia, which massively contributes to the reduced population of this majestic animal.

Even though vultures do not attack lions, when we talk about animals that eat lions, these scavengers are a must mention. Vultures rarely attack other animals but will take the opportunity to eat any dead organism, including lions.

Vultures would eat lions that are either killed by other predators or diet from natural causes.

Once a lion dies, its carcass becomes a meal for a wide range of vultures. Also, other scavengers that are unable to find any other source of meat would try to snatch a few bites.

How Do Lions Protect Themselves?

Lions do not have to worry too much about defending themselves from other predators because there are not many animals that would take the risk and attack an adult lion. Besides their intimidating size and strength, life in a group additionally protects them from any potential predator.

Lions are the only social big cats that live in groups. The pride can count anywhere from a few individuals to up to 40 members.

Both lions and lionesses are loyal to the pride and have different roles within the pride.

Male lions are responsible for protecting pride members by marking the territory or fighting any potential predators. Lionesses, on the other side, are hunters, and they are making sure food is available for all members.

In addition, lions have strong muscular bodies, especially their hind legs allowing them to cover 36 feet with one leap. Also, they are equipped with sharp claws that are powerful enough to kill much larger animals.

Besides interaction with each other, a lion roar is a warning sign for any potential intruders.

The roar is so loud and fierce, and it can travel 5 miles away. No animal on the planet would remain indifferent to these frightening roars of warning.

Among all big cats, lions have the loudest roar. The roar can reach up to 114 decibels. For instance, when jet planes are taking off, they produce a noise of 120 decibels.

What Are Lions Afraid Of?

Unlike humans, lions do not have the same fear emotions. Lions just won’t hunt big mammals, not because they are afraid of them, but because of the possible injuries they can get from.

The lion is aware of the potential danger and physical damage by other animals in its surrounding, so they are cautious of a few large animals. Some of them include:

It is worth mentioning that only an isolated lion alone would stay away from these giants. When in a group, lions are fearless, and with teamwork, they have been known to take down such large mammals.

Lions are fierce predators who dominate every environment they live in. No predator in the wild hunts lions to eat them. Besides humans, who are the number one lion predators, hyenas, cheetahs, crocodiles, and wild dogs are the main lion’s natural enemies, and they would sometimes attack and eat lion cubs.