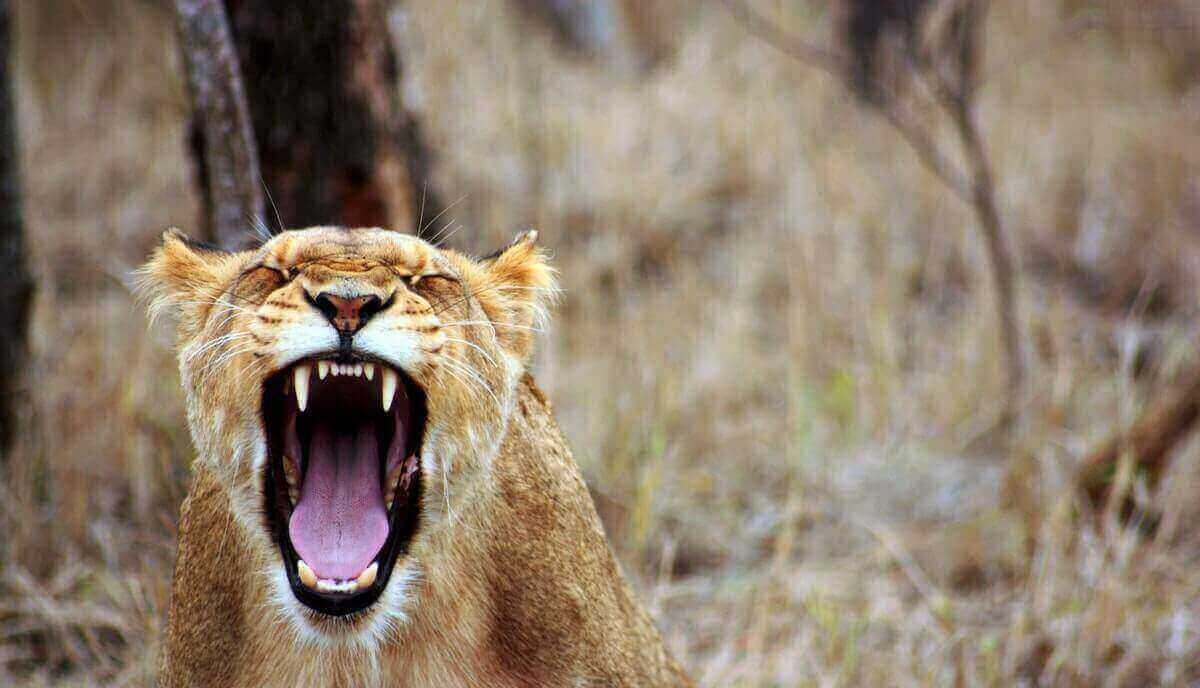 The roaring male lion is an iconic site. We’ve all seen it depict in many art forms, from paintings to movies. If you had the chance to hear a lion roar in the wild, you know how powerful it sounds.

But have you ever wondered why do lions roar? Something so spectacular needs to happen for a reason.

Lions are social animals, and they use different ways to communicate. Roar is a crucial part of lion interaction. Lions roar to warn the intruders to stay away. Both male and female lions roar to show health and strength, but not all roars are territorial. They use it to communicate their location with other pride members. Lionesses also roar to communicate with males during the mating period. Not all roars are the same, but they all are a key part of a lion’s social life.

Why do lions roar?

Most members of the cat family are solitary hunters. They are adapted to living and hunting alone. Most of the wild cats would stay with their siblings until becoming sexually mature. At that point, they would separate from the group and continue on their own.

Lions are an exception to this rule. They are social animals, and they live in groups called pride with a strict hierarchy.

A major part of the pride consists of female lions, their cubs, and no more than two to three male lions. All members are loyal and dedicated to pride.

Pride is essentially a matriarchy. Females are responsible for hunting, guarding the territory, and taking care of the cubs.

Male lions are not contributing nearly as much. Their main roles are guarding the pride against other male lions and reproducing with the females. Other than that, they are famous for sleeping most of the day.

Male lions sleep from 18 to 20 hours a day, compared with females that get around 15 hours of sleep.

As we already mentioned, lions are social animals, and they often communicate with other members of the pride. A handshake in a lion’s world consists of rubbing heads, licking, and looping their tails with each other.

Roaring and making sounds are a vital part of lions’ interaction with each other and other animals. Lion’s roar can be heard up to 5 miles away. They use different types of roars to communicate different things.

While fierce roar is a warning sign to intruders, they are using other types of sounds with their pride members. Besides roars, lions vocalize several different sounds, like grunts, growls, snarls, meows, moans, and more.

When in heat, female lions will communicate this with males by scent, body language, and calling. If some of the pride members get separated from the group, they would use roar to tell their location to other members.

There are many other scenarios where lions use vocalizations, but these are the most common ones.

Why do lions roar at night?

In most other cases, lions will spend their day sleeping and snoozing, becoming active at night. That’s why it’s common for lions to roar into the night.

Lions are considered nocturnal animals. Which means they are active and hunting during the night.

This is not always the case, as lions are opportunistic hunters. If they have prey available during the day, they will take advantage of that and hunt. For example, if they are near a water source that attracts prey during daylight.

Do lions roar when hunting?

It would be counter-productive for lions to roar when hunting. Lions mostly hunt using two different tacts.

The primary way is by stalking its prey. Lioness would stay hidden for as long as possible and then approach the target. When they get close enough, they would charge and chase the prey.

The secondary tactic is reserved for hunting larger prey. The pride would corner the animal and come at it from different sides. In this scenario, male lions also join the hunt.

Why do lions roar in the zoo?

Lions roar less often in the zoo compared to the wild. This is not surprising because lions use a roar to warn off the trespassers in their territory.

In captivity, they don’t encounter other lions or pride, so they don’t need to send this warning. To warn others is not the only reason lions roar, that’s why they still do this in the zoo.

Both male and female lions will roar to show health and strength to their pride members.

Why do lions roar so loud?

Of all wild cats, lions have the loudest roars. At one meter distance, it can reach up to 114 decibels. This is louder than a music concert (110db) and almost as loud as a jet plane at take-off (120db).

Lion’s roar is so loud it can be heard up to 5 miles. But why is it so?

Lion’s roar is so loud because of the anatomy of their vocal cords. Unlike other animals, the lion’s vocal cords are not triangle-shaped. They are flatter and shaped like a square.

When the air passes through their vocal cords, their shape allows them to create louder sounds with less lung pressure. Lions and tigers share this trait, but lions have louder roars.

Do lions roar after a kill?

Lions don’t roar after a kill. They might snarl or growl at other scavengers trying to take their food away. They don’t roar to mark a victorious hunt.

After a successful kill, there is an eating hierarchy among lions. Males eat first, the females that made the kill eat after them, and cubs are often the last to get the food.

Roaring is a component of the lion’s adaptation and a significant part of their communication. It can be both an element of their mating ritual or a sign of aggression. A loud roar is a great way to mark the territory and show strength.

Whatever the scenario is, one thing is certain, a lion’s roar is a powerful thing. It can be heard up to 5 miles away and be as loud as 114 decibels.