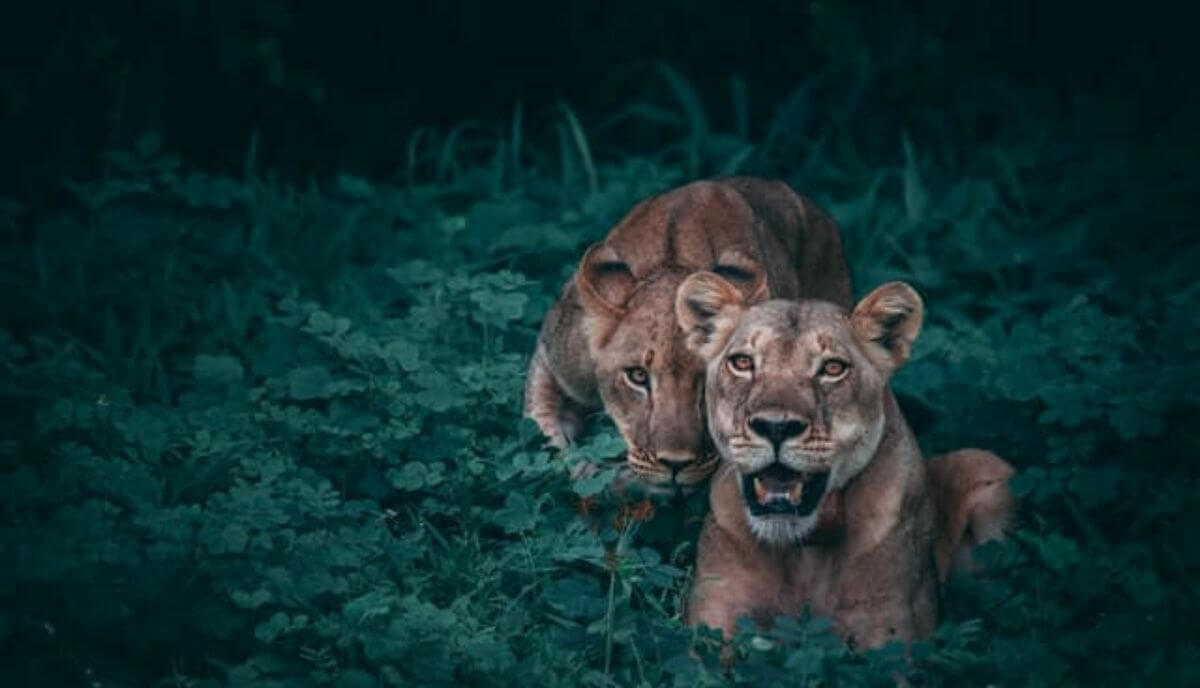 Lions are apex predators, and one of the bravest creatures in the world. However, even the most fearless animals have something that they avoid.

The same goes for the king of the jungle. So, what do lions fear?

Lions fear people who are their number one threat even though they don’t naturally occur in their environment. In many cases, lions avoid human camps and homesteads since they know that they can be hurt or even killed. Additionally, every year a lot of lions are poached by trophy hunters, so lions associate humans with danger.

As a result, lions will want to stay as far away from people as possible.

What are Lions Afraid of?

Living in the wild can be quite unpredictable, even for the king of the jungle. Lions are mostly afraid of people who invade their space with guns and other weapons that can hurt them.

They mostly know not to be afraid of people in tour vans, so they can comfortably go about their business.

However, lions know not to go where humans live. Whether it is camping sites with their bright lights or homesteads.

In the savannah in Africa, sometimes people graze their livestock in the wild where there are lions. While there may be a whole herd of livestock grazing and one or two people herding, lions know not to hunt them.

They may seem like an easy meal, given that cattle can’t put up much of a fight, but the price is usually too much to pay. The herders usually carry weapons and are not afraid to kill lions who threaten their animals.

Read Also: What Are Lions Enemies?

What Animals are Lions Afraid of?

While lions are majorly afraid of humans, there are some animals in the wild that they wouldn’t dare mess with them.

Are Lions Afraid of Giraffes?

Yes, lions are very afraid of giraffes. While they are herbivores, and they may not seem like a threat, their long legs are quite strong, and when they kick a lion, they may be badly injured. Also, when running, lions can get caught in their legs and be trampled to death, so lions know to be careful around giraffes.

A female adult giraffe can weigh up to 1,500 pounds which is almost four times the weight of a lion.

This means that their legs carry a lot of weight, so they would stand no chance if this pressure were put on a lion. Furthermore, their long legs are quite powerful; hence it is not an easy animal to hunt without risking terrible injuries.

Giraffes put up quite a fight when being hunted, and other than kicking or stepping on lions, they can run long distances thanks to their long strides.

One or two lions cannot risk hunting a giraffe alone since it may prove fatal.

Are Lions Afraid of Elephants?

Most lions tend to avoid elephants, as they are the largest animals in the world. An adult elephant is ten times larger than a lion, so it would be crazy for a lion to believe that it can win against one. Thanks to its heaviness, it makes one kick from the elephant would be deadly to a lion that may want to contend with it.

Besides its large size that makes it inaccessible to even a pride of lions, an elephant is quite smart, especially an adult with a lot of experience.

Lions know that only a single elephant is difficult to kill or fight off. It is even more dangerous when elephants are in a group since lions could easily get stomped, which could lead to several casualties.

The sharp and long tusks of the African elephant are another danger for lions that dare to challenge an elephant.

Are Lions Afraid of Snakes?

Lions are not afraid of snakes, instead, they are cautious around them since they are aware of potential damage. While lions do not eat snakes, they tend to chase them away from their habitat. This is because snakes have a deadly bite, and lions are not immune to snake venom.

However, it is rare to see a frightened lion that runs away from snakes.

Despite being one of the most powerful animals in the world, the king of the jungle still has a few weaknesses.

Lions have poor stamina in comparison to other hunters at their level. They can run very fast for short distances, but they will get tired quite fast and probably give up.

This is why lions don’t hunt animals such as antelope and gazelles, which sprint fast for long distances. Because of this, lions usually hunt zebras and wildebeests, which are not as agile.

Lions will use the long grass in the savannah to camouflage to get as close as possible to their prey. This ensures that they can get them without having to run long distances.

Lions can swim, but they are not great fans of water and would rather not get in or close to water if they can avoid it.

They, however, can swim quite well like other cats in the wild, but this is only when it is unavoidable. Lions take a while to get into the water even when their prey escapes there.

Another reason why lions don’t like swimming is that they are afraid that the water is filled with crocodiles. Lions have fallen prey to crocodiles in dams and rivers, so they do not like to swim so they don’t get killed.

For being a cat member, It is safe to say that the kings of the jungle are not practically good climbers. In fact, they struggle a lot when it comes to climbing activities.

Most cats in the wild such as leopards and jaguars, are excellent climbers and usually go on top of trees when faced with danger. Jaguars go even further and carry their prey in trees to avoid scavengers and other predators.

On the other hand, lions can jump high, but they are not great at climbing, so they only climb low, horizontal trees. And they usually only do it to avoid annoying insects as well to escape high heat on the ground.

The following are some of the frequently asked questions about lions.

Are Lions Afraid of Fire?

Fire is one of the main reasons lions won’t go close to human camps or homesteads. However, on first contact with fire, many lions usually walk around it to figure out what it is.

In some cases, they may lie close to the flame where it is warm since cats like warmth.

On the other hand, people use fire to chase away lions since they are afraid of getting burned, as many have experienced.

Are Lions Afraid of Water?

Lions are not exactly afraid of water, but they don’t like it either. They don’t enjoy getting their fur wet or swimming in the water.

As mentioned, they also know that dangerous predators such as crocodiles live in water, so they are cautious.

Being the king of the jungle puts lions at the top of their food chain, but they also face various dangers in the wild. Human beings are at the top of the list of lions’ threats, so they are very cautious around people. Other large animals, too, are a danger to lions, so they ensure that they stay out of their way.

There are also some smaller animals that a lion alone is afraid of, such as wild dogs and hyenas. They are usually found in large groups that can threaten lions.