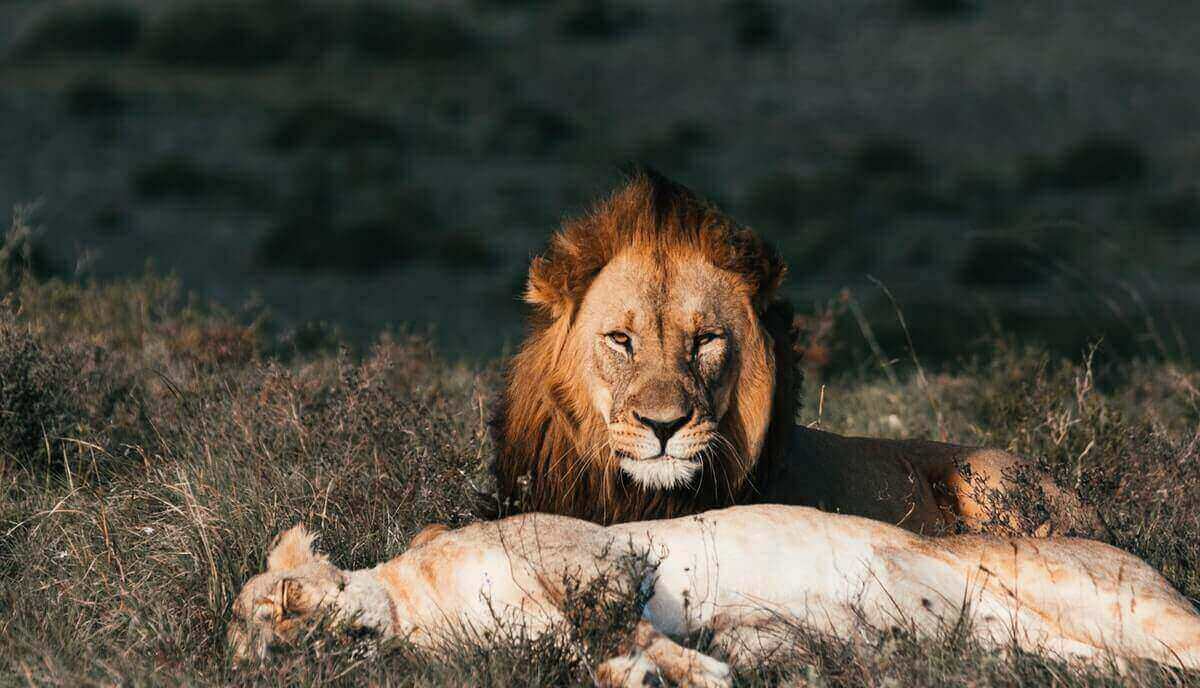 We can freely say that lions are one of the most recognizable animals in the whole animal kingdom.

Almost all civilizations in some kind of art form mention lions. Poems, paintings, sculptures, national flags, titles of kings are some of the many cultural significations where lions take part.

Different lion personalities are also often used to represent humans qualities. Strength, dominance, confidence, and leadership, among others. But what about loyalty? Are lions loyal?

Yes, lions are loyal and devoted to their pride. Unlike any other big cats, who live solitary lives, lions are social animals that live in groups. The female’s dedication and loyalty to the pride are even more present compared to the male’s. Lionesses usually stay loyal their whole life to the same pride, while male lions seldom remain in the same pride for more than five years.

Are lions loyal to their pride?

At first, scientists thought that the social structure among lions existed because of the power of hunting in groups. Yet, the real reason is that by grouping up, lions get access to valuable territories. Which is most of the time centered around key areas in the wild.

They have access to shelter, food, and water. And most of the time larger prides, have much better territories.

A group of lions is a family unit that consists of 2 to 40 members. The pride usually counts one alpha male, a few other males, many lionesses, and their cubs.

Inside the pride, loyalty is at a high level. Lionesses are responsible for raising the cubs and hunting.

On the other side, males mark the territory by urinating around the living area. Although males do not directly participate in parenting, they will defend the cubs and take care of the whole pride by chasing off any potential enemy.

Both lions and lionesses are loyal to the pride until they are part of it. If there is enough food source, most lionesses will stay devoted to the same pride for their whole life.

While young males will leave the pride when they age enough to take over another pride. Usually at the age of two or three.

When taking over a new pride, a young nomad lion would challenge the ruling male alpha. They would fight for the family throne in the battle where the winner takes it all.

In case a new lion wins the fight, he will usually kill the previous alpha’s offspring, to stake his claim on the females.

Male lions stay in the pride for 3 to 5 years; until they are not capable of fathering new cubs. Or until they get replaced by the new, stronger male.

Are lions loyal to their mate?

Both lions and lionesses are polygamous. Meaning they have more than one mating partner throughout life.

So, in the sense of sexual loyalty toward a mate, lions are not loyal. Yet, in terms of defending and protecting their mates, lions are very loyal.

In pride, lionesses have one or two males (depending on the pride structure). On the other side, males mate with more females.

Lions do not have a mating season; they breed throughout the whole year. Males reach sexual maturity at the age of three, while females can give birth to cubs at the age of four.

Mate selection in the pride usually ends without competition among males.

Instead of violence, the first male lion who gets the chance to mate with the fertile lioness is the one who stays near her during the early period of fertility.

Are lions loyal to their owners?

All lion lovers, at some point, fantasized about having this big cat as a pet. Despite their cuteness and social behavior, having a lion as a pet is not a good idea.

Captivity lions can indeed be loyal to their owners and even see them as pride members. However, in zoos, lions are rarely seen to get along with tigers and other predatory animal species.

You are probably familiar with the legendary lion Christian, who was born and raised in captivity. The lion was released to the wild after it had reached its maturity. Yet, the owner decided to meet the lion again after a few years of living in the wild.

The scenes in the video are absolutely heartwarming.

Sadly, this is not always the case. More than a few times, ‘tamed’ lions attacked and seriously injured or killed their owners. They are wild animals, and their reactions and behaviors are hard to predict. Lions can be loyal to their owners, yet, only one non-loyalty moment is enough for fatal outcomes.

How do lions show affection?

Lions show affection in various ways. A study ran on captivity lions in Tokyo zoo found out that affectionate behavior among lions helped them bond faster and strengthen the whole pride.

Research has also shown that male lions preferred displaying affection by head rubbing. On the other side, 97% of lionesses prefer licking as the main affection method.

Some other ways of showing affection may include:

Lions are social animals and usually loyal to the ones they have a long relationship. Yet, they are complex creatures, and sometimes they can react to their predatory instincts.

One day they are loyal, another day they might not be. At the end of the day, lions are wild and dangerous animals. And they should be treated in that manner.

Thank you for reading. If you liked this post, here’s another popular lion topic: How Much Do Lions Cost?