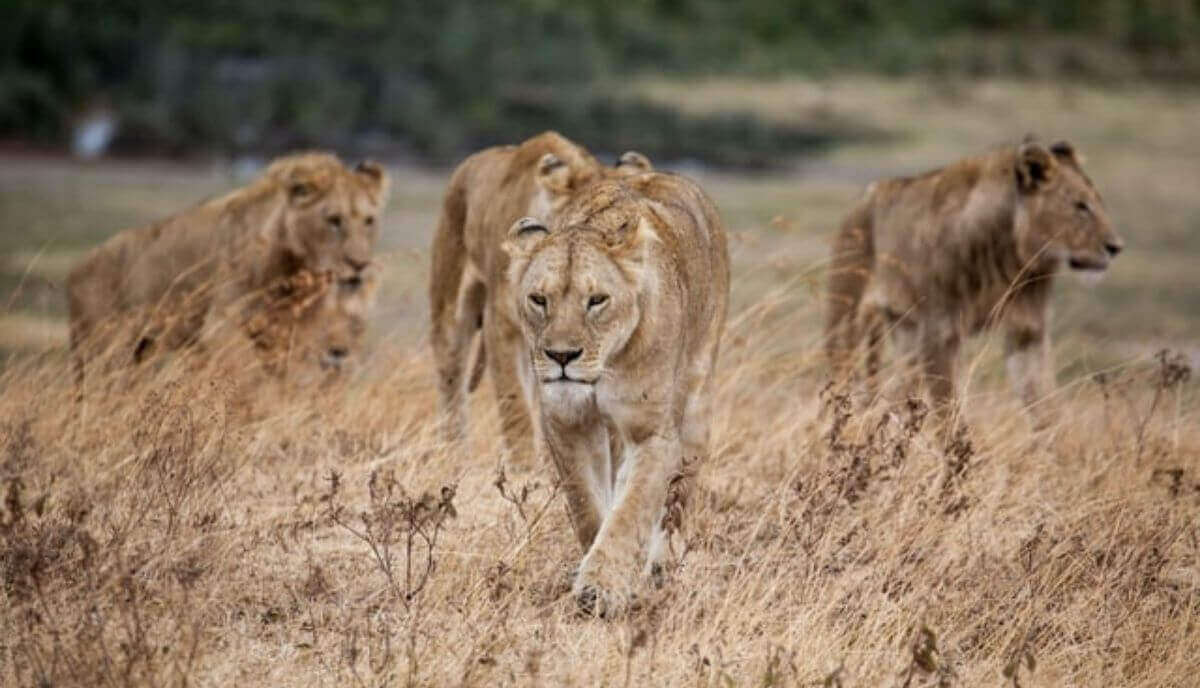 A group of lions is called a pride, and also a sault or troop. But it is more befitting to address the royalty of the animal kingdom as a pride. A group of lions (pride) is a family unit that consists of up to 40 individuals.

A lot of people ask, what is a group of lions called? The reason is there are some strange collective names for different wild animals. For the lions, the most common name is the pride.

You’ve got the plane tickets ready, the family or a group of friends together, a safari ready, and safety rules in check. What about your vocabulary?

Knowing a group of lions is called a pride isn’t enough. Here are a couple of terminologies that will make you look cool under the hot safari sun.

A male lion is called a… lion, just like we have known all our lives. A pride of lions are the royalty of the male kingdom, but amongst the group of royalties is the true king of the jungle, the male lion.

And just like every king, lions are the pillar of strength for the pack. They might not partake often in the hunting process, but they do their part to protect the pride and their territory.

A female lion is called a lioness. They might not be the front runners or head of the pack, but they are the backbone of the pride. In fact, lionesses are usually the “bread winners” of the pride.

They gather in groups and hunt down prey that would serve as a meal for all members of the pack, including lions who barely ever take part in the hunting process.

Lionesses also have the responsibility of catering for their young; feeding them, protecting them in the stage of their vulnerability, and teaching them the basics of hunting preparing them for life in the wild.

A baby lion is called a lionet, whelp, or simply a cub. The young one of a lot of carnivorous animals is actually called a cub. For example the offsprings of tigers, foxes, bears, and wolves are also known as cubs.

A group of lion cubs is known as the litter. Female lions give birth to cubs all year round, but it rarely happens to get more than four young at the time. The litter usually sizes from two to up to six cubs.

A group of male lions is called a coalition. The essence of a coalition is to exude dominance and extreme strength of the pride to stray lions who would want to come into the pride and assume the position of the leaders.

The number of adult male lions in a pride is kept at a minimum, at an Ideal number of three or two. This is no surprise as young lions at about 2 to 3 years of age are being kicked out of the pride to keep the level of authority and competition at controlled levels.

A coalition can also exist outside a pride. These types of coalitions are made up of adult male lions that have been exiled from their pride of birth.

A group of female lions is called a pride. Surprised? You shouldn’t be. It is a known fact that female lions are the game players of a pride.

A pride of lions is mostly made up of female lions than male lions. Male lions do the work of mating with female lions to produce young and protect territories and members of the pride. But that’s just it.

Lionesses do practically every other thing to run the pride. They mate to give birth to their young. They cater to the needs of the pride by hunting and taking care of cubs.

Read Also: What is a Group of Kangaroos Called?

Why Are Lion Groups Called Pride?

Simply put, a group of lions is called a pride because they are the royalty of the animal kingdom. Taxonomists name animals according to their stature, position on the food chain, behavior, and a lot more.

Lions are at the top of the food chain, which means they control the lives of other animals in their habitat. They are fearless and strong creatures with no natural predators, and most of all, they have a social structure.

Besides that, lions present a diverse symbolization. Since ancient times, lions have been represented as a symbol of courage, justice, dominance, hence the name “the king of the bests”.

For all these reasons, a group of lions is called a pride.

Why Do Lions Live In Groups?

Sometimes keeping the best piece of land with an abundance of food and water is crucial for securing a long life in the wild. Especially if that territory is protected by the powerful pride individuals.

The next question is, are lions loyal to the group their whole lives? Not every lion.

Once a young lion male is past the age of 2 or 3, the older lions in the pride, and occasionally lionesses, chase them out of the pride. Or they sometimes decide to look for another pride where they can become new alphas.

A coalition of lions outside of pride are not necessarily related; they are usually young adult male lions exiled or left their pride of birth.

On the other hand, female lions are usually loyal to the pride their whole lives. If there is enough food source for every pride unit, lionesses choose to stay devoted members.

In Summary – What Is a Group of Lions called?

There you go, a group of lions is called a pride.

Did you already knew, but you just could not recall it?

Either way, I hope all other jargons and lion-related vocabulary have helped you level up your wildlife knowledge.

At the very least, for the next safari trip, you are ready to use useful lion terminology and brag to your friends.