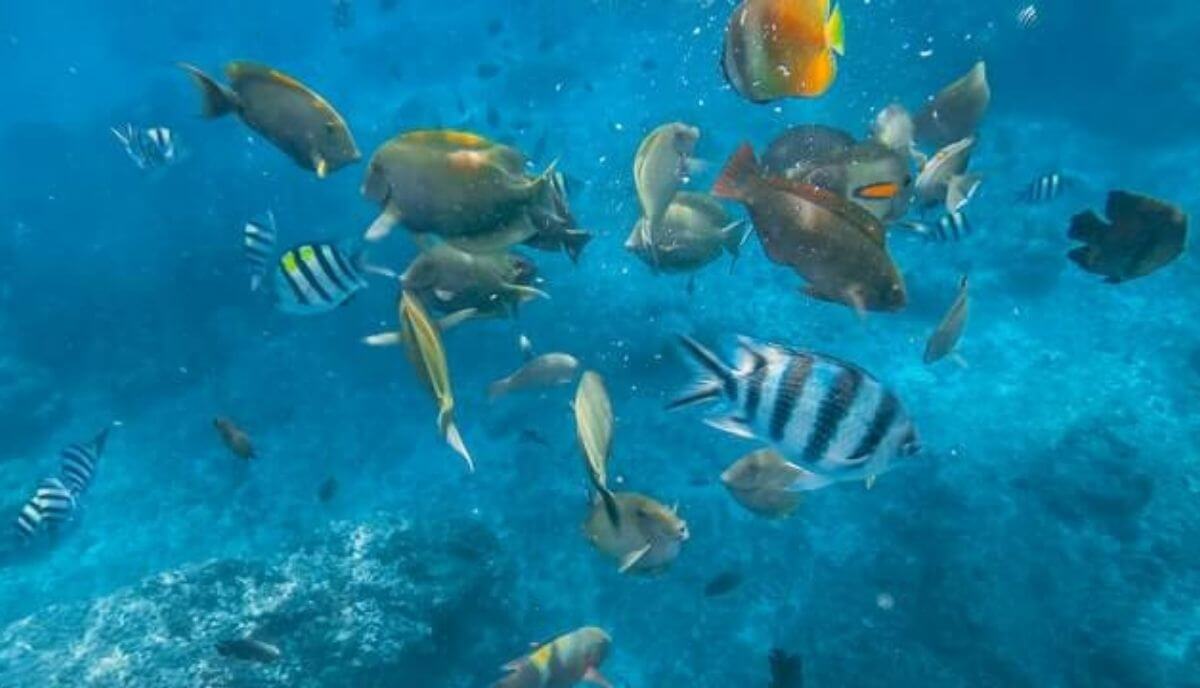 There are three main types of animals; those that live in water, air, and land. A few of these have their habitat in both land and water, including salty and freshwater.

Examples of aquatic animals are long, and it contains various types of beings such as fish, mammals, reptiles, and amphibians

Animals that live in water depend on it for their survival. Not only does it provide a habitat for them, but it also allows them to feed on other creatures and plants. What the animal feeds on depends on its adaptation to its environment.

The following is a compilation of different types of aquatic animals examples:

These aquatic animals are found along some rivers and coasts of the Atlantic, South America, and parts of Africa. Manatees are ocean omnivores, but they mainly feed on the plants in their habitat, such as seaweeds and grasses, and algae.

They are born in water and will live most of its life there. Most manatees are quite large and can weigh 1200 pounds, and despite this weight, they can swim up to 15 miles per hour, although in short bursts.

Like many aquatic mammals, manatees breathe air from the surface, which is why they often come up from the water. They can live alone or in small groups of up to 12, including females and their young.

It is found on the coasts of North America and parts of Asia and spends most of its life in the water. They like floating in the water while on their backs and can stay this way for hours.

Sea otters can be seen floating around alone or in groups, although they sometimes sleep on land. Their diet comprises mussels and other shellfish found around their home. They also feed on small fish, octopuses, crabs, and urchins.

One unique behavior of sea otters is cleanliness, and they like to keep themselves tidy, especially after eating. They will often rinse themselves in the water after a meal. In addition, otters maintain their coat since it plays an essential part in keeping them warm even in freezing waters.

These are crustaceans found all over the world in oceans and seas. There are many different types of crabs in the water, but they all have similar behavior.

Crabs are animals that live in both water and on land, with some species primarily found on the ground. They usually have five pairs of legs and a pair of claws that they use when grabbing things and defending themselves.

While on land, they move sideways using their legs with their claws up in the air. Crabs are nocturnal animals, so they are mostly spotted at night when their predators are asleep, and they come out to feed and mate.

There are various types of dolphins found in the world’s oceans, with the most common one being bottlenose dolphins. These cunning animals are known for their playfulness, intelligence, and ability to socialize easily with humans.

Their intelligence is demonstrated by their ability to communicate with each other and human beings using a variety of sounds that they produce. They are fast swimmers with the bottlenose attaining speeds of up to 18 mph in warm seas.

Dolphin’s diet comprises small fish and other tiny animals in the ocean, such as crabs. Some are attracted to moving ships and boats and will often be spotted racing them side by side.

These reptiles are primarily found in the southeastern part of North America, and they are usually at the top of the food chain in their environment. As a result, they feed on everything, including fish, amphibians, and mammals that go-to drink in their habitat.

Alligators spend most of their time in the water, although they often go on land for brief moments. They have a unique ability to hold their breath for up to 24 hours when they are comfortable in the water.

Otherwise, they float around while their nose is out of the water to enable them to breathe. While they don’t go on land often, they can run quite fast, up to 35 mph, when chasing prey.

Related: Animals That Live in Lakes

Hippopotamus love to spend time in the water, which they use to cool their massive bodies. They can be found in slow-moving rivers, lakes, and ponds and can spend as much as 16 hours in the water every day.

Hippos have sensitive skin that needs to be kept wet, so they take so much time in the water. They are often seen going on land when the sun goes down to feed. These animals can hold their breath for up to 30 minutes, but they don’t prefer to spend their time submerged in water.

These semi-aquatic mammals are omnivores, and while they are mostly peaceful, they can be quite dangerous and aggressive when provoked. Their large teeth and mouths enable them to crash most animals.

The blue whale is the largest aquatic mammal found in many oceans and seas around the world. They can grow to a length of up to 30 meters and weigh more than 150 tons.

Whales are considered mammals since they breathe air and give birth to their young, who suckle on their mothers till they are of age. They are known for their blow, which is how they breathe out when they come up for air.

The bodies of smaller whales have ways to prevent hypothermia, such as with hair and fat. However, the larger whales produce so much heat, so they have the opposite mechanism to prevent overheating. They use sound to perceive direction as well as communicate with other whales over long distances.

There are seven species of sea turtle that are found in all oceans all over the world apart from the Antarctic and Arctic circle. The most unique of these is the leatherback, which is the biggest of the group weighing up to 2000 pounds.

Turtles also don’t have the hard shell spotted by the others. Instead, its exterior is slightly flexible and rubbery. They spend most of their time migrating between breeding grounds and where they feed. They can travel over 3000 miles each way, depending on the species.

Turtles mate while at sea then the females lay their eggs at the beach. Females dig holes where they deposit their eggs, cover them then return to the sea. The incubation time is about 60 days when the hatchlings move from the nest into the sea, usually at night.

While they are depicted as the villain in most movies, there is much more to sharks than killing and eating everything in their path. For one, they belong to a species of animals whose skeleton is made from cartilage instead of bone.

Sharks are categorized as fish, and the whale shark is the largest fish globally since it can reach lengths of more than 55 feet. In the ocean, sharks are at the top of their food chain with their teeth that routinely fall off and grow afresh.

They are usually found in deep waters, and they migrate long distances for breeding and feeding. They may travel alone or in groups depending on the species.

Walruses are large tusked mammals usually found in the waters of the Northern Hemisphere. Due to their size and strength, polar bears and killer whales are the only predators that walruses face.

Despite their size, walruses are adept swimmers; they can reach speeds of 21 mph. Even though they are mostly seen in the water, walruses do spend some time on land, mostly in groups of several individuals.

These aquatic animals are characterized by thick hair, foreflippers, and the ability to walk on all four limbs. They are closely related to walruses and are usually found in subtropical and tropical waters.

Sea lions spend most of their lives in the water; however, they also go on the shore, where they molt, rest, and give birth. These water creatures are quite social and will often travel and hunt in groups. Besides, sea lions are known for their playfulness and complex communication.

By being carnivores, sea lions enjoy a wide range of seafood. Their most usual diet consists of crabs, squids, salmon, octopuses, among other marine animals.

Octopuses are marine creatures that are widely recognized for having eight arms, three hearts, large eyes, and bulbous heads. They are part cephalopod invertebrates that also include cuttlefish and squids.

These boneless animals live in various sea terrains and spend most of their time in small holes in rocks and corrals. Octopus can also walk on land; however, they can survive only a few minutes outside the water.

Octopuses are also known to be adept hunters. They are carnivores who favor eating sea stars, snails, small fishes, crabs, and even other octopuses.

Lobsters are water animals equipped with three to five pairs of claws and long bodies. Found in the bottom of the ocean, lobsters enjoy salty and cold waters. They spend most of their time hidden in rocks or weeds.

Lobsters are categorized as crustaceans and are closely related to crabs. What’s interesting about these creatures is that they can swim in both directions. When they are in danger, lobsters will use their powerful tails to scoot away in reverse.

They are omnivores, meaning they eat both plants and meat. However, they mostly feed on live prey, such as worms, clams, fishes, mussels.

A seahorse is a small marine fish that live in shallow tropical waters. The name seahorse is derived from the Greek name “Hippocampus”. “Hippos” (horse) and “Kampus” (sea monster).

These aquatic animals are arguably the most unique and charismatic creatures. There are more than 45 species, ranging in size from one inch to more than one foot.

As they are not very mobile, seahorses spend most of their time in sheltered habitats, such as mangroves, coral reefs, and seagrass beds. Seahorses feed on tiny crustacea found on the bottom of the ocean. Adult seahorses eat up to 50 times per day! (source)

The last examples of aquatic animals are platypuses. These duck-billed, beaver-tailed, and otter-limbed species are among the most unique creatures in the whole animal kingdom.

Platypuses usually live in and near rivers and streams of Eastern Australia. They are part of the Monotremes family of mammals, the only mammal family that lays eggs.

These strange creatures are carnivores, and they spend most of their time in the water. They hunt and feed on various aquatic animals. The other part of the day is reserved for resting, which takes place inland burrows.

Besides their natural predators (snakes, foxes, water rats, cats), the biggest threat to platypuses lies in the loss of their natural habitat.

There are many examples of water animals in the world; the above are only a few. They feature varying behavior depending on their physique and environment to survive. Many marine animals also spend some time on land, but the water is their primary habitat.

And that’s about it. Thank you for reading the post “Examples of aquatic animals”, we hope you have learned something new today!

If you liked this type of listicle article, we would like to recommend you also: Animals That Eat Fruit