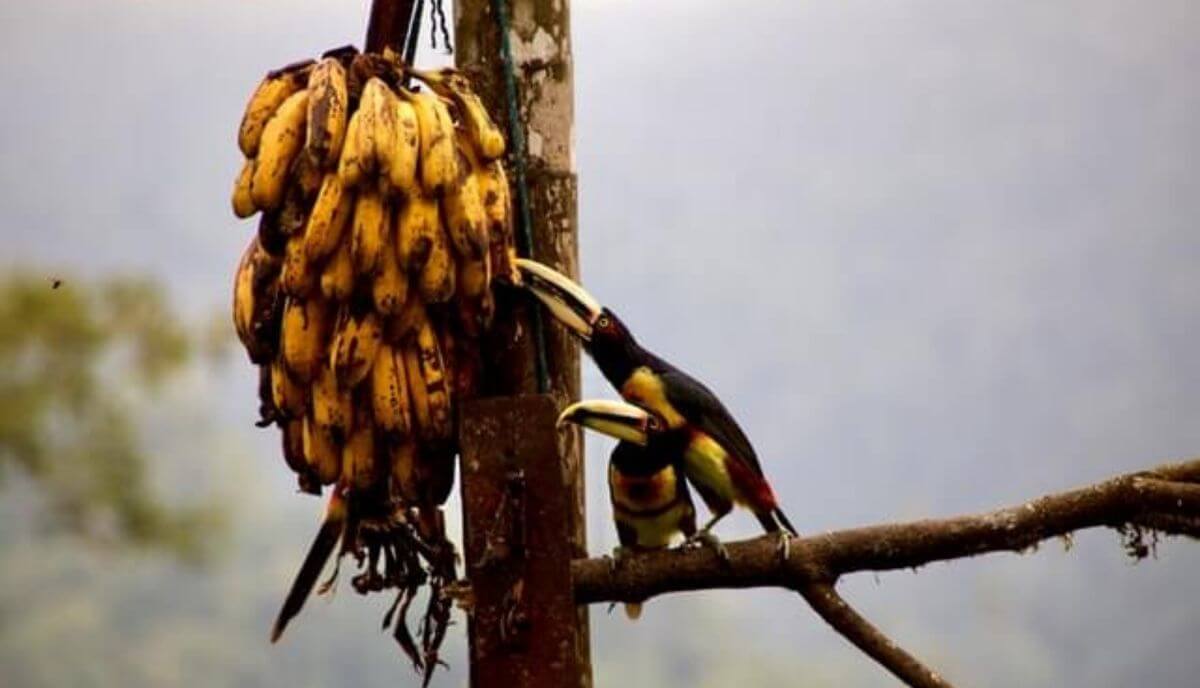 Animals that eat fruit as a primary source of food are called frugivores. However, many of these animals do not subsist solely on fruit; they also supplement their diet with other plant materials like roots, leaves, and flowers.

They are considered frugivorous under two conditions: If their diet is more than 50% fruit-based, and also if their feeding habits release seeds that can germinate and grow.

Additionally, when it comes to diets in the animal kingdom, many species of herbivores and omnivores eat fruit, depending on its availability. As a result, more often than not, fruit consumption is largely determined by the season of the year.

For these species, in particular, fruit does not consist of the larger percentage of their diet, as their primary sources of nutrition are acquired from other plants or animals.

Below is a list of ten wild animals that eat fruit:

Hornbills are an exotic bird species found in the subtropical and tropical regions of Asia, the Pacific Islands, and Africa. They are recognized by their colorful horn-shaped bills, which have an additional colorful adornment atop the bill – in some species.

On the other hand, the forest-dwelling toucans eat only fruit, largely consuming figs, and grapes.

Toucans are a tropical forest bird species found in Mexico, Central and South America, as well as the Caribbean. Similar to hornbills, they are easily recognized by their large and colorful beaks.

Although they supplement their diet with frogs, snakes, seeds, eggs, and insects, toucans are frugivorous, meaning that their main source of nutrition is obtained from the fruit.

The maned wolf is found in several parts of South America, including Southern Brazil, Paraguay, Bolivia, and Peru. Unlike most of its canine relatives, this species is omnivorous, with more than 50% of its diet consisting of plant matter and fruit.

Some of the fruits that the maned wolf eats are berries and sugarcane. It is also particularly fond of a tomato-like fruit called wolf apple or lobeira (which translates to ‘fruit of the wolf’).

It turns out that this is the wolf’s favorite, consisting of a large portion of its plant-based intake.

Orangutans are tree-dwelling monkey species that are found in the rain forests of Malaysia and Indonesia. Orangutans subsist on fruit primarily, and this makes up 57-80% of their consumption. They enjoy ripened fruits that have soft pulp.

A selection of some of the fruits eaten by orangutans are figs, berries, bananas, durians, oranges, mangoes, circus fruit, apples, oranges, and rambutan. They also eat other plant material such as tree bark, shoots, young leaves, bamboo, honey, flowers, nuts, and even, believe it or not, soil!

Fruit bats are the largest of the bat species and are found in the tropics and subtropics of Oceania, Eurasia, and Africa. Most species of fruit bats are frugivores, and a few fruit bat species are nectarivorous, feeding primarily on the nectar of flowering plants.

Fruit bats also supplement their diet with leaves, shoots, buds, seedpods, sap, cones, twigs, and bark. They consume fruit by breaking the skin of the fruit and sucking out the juice. They eat copious amounts of fruit, up to two and a half times their body weight in a night.

The hazel dormouse is found mainly in Northern Europe and Asia Minor. It is a nocturnal species, and due to its size, spends the majority of its time atop trees, even taking long detours through the branches to avoid danger.

The dormouse is an omnivorous species, subsisting on leaf and flower buds, nectar and pollen, as well as insects. It also subsists on berries, nuts, and other fruits. Some examples of fruits eaten by the dormouse are blackthorn fruit, blackberries, buckthorn, yew fruit, raspberries, and dewberries.

Another frugivore animals are owls monkeys. These creatures, so named for their owl-like faces, are the only truly nocturnal species of monkeys. This makes them more commonly known as night monkeys. They are found in Panama and the tropical regions of South America.

Their diet consists primarily of a variety of fruit, such as bananas, papaya, and mangoes. However, fruits are not the only source of nutrition for them; when fruits are scarce, they supplement their diet with leaves, nectar, tree bark, nuts, flowers, and insects.

Bearcats, also known as binturongs, or civet cats, are found mainly in the tropical rainforests of South and South-Eastern Asia. They are a slow-moving arboreal species that rarely come down to the forest floor, and the dense canopies of the jungles are ideal for their lifestyle.

Bearcats are omnivorous and feed on small mammals, fish, birds, earthworms, insects, and fruits. The fruits they most commonly eat are figs. However, captive binturongs have been fed apples, grapes and have been seen to be particularly fond of plantains.

Bears come in a variety of species all over the planet. While polar bears are carnivorous and pandas are heavy bamboo consumers, most bears are omnivorous and subsist on a diet of small animals, roots, nuts, insects, fish, and fruit.

Most of their fruit consumption begins shortly after coming out of hibernation. Berries make up a very crucial part of a bear’s diet, and they are particularly fond of berries, consuming a wide variety, depending on their availability.

The last members of our list of animals that eat fruit are cassowaries. These big flightless birds are mostly found in tropical forests of Australia, New Guinea, and Indonesia.

Even though they will sometimes snatch small vertebrates, invertebrates, and fungi, cassowaries prefer eating plants. Over 240 plants have been discovered in their diet. However, despite their diverse diet, cassowaries intake is 90% based on fruits. They mainly eat fruit that has fallen on the ground.

Cassowaries are considered keystone species because they disperser seeds of various plants. It is estimated that more than 100 plants are entirely dependent on these birds.

Animals that eat fruit are found all over the planet from forests to grasslands, air to land. The variety of fruit consumed is based on where they are found, their habitat, and the season of the year. Fruits tend to be seasonal and this provides these animals with variety in terms of sources of nutrition.

Frugivores are mostly found in forests and jungles, where there is not only an abundance of fruit and other plant life that supplements their largely fruit-based diets. The list above is by no means exhaustive, much is still being observed and understood about animals that eat fruit.

One thing is certain, animals that subsist on a fruit-based diet have been observed to be very crucial to the life of forests and jungles, as the seeds that are spat out or excreted by the animals help to replenish the forest.