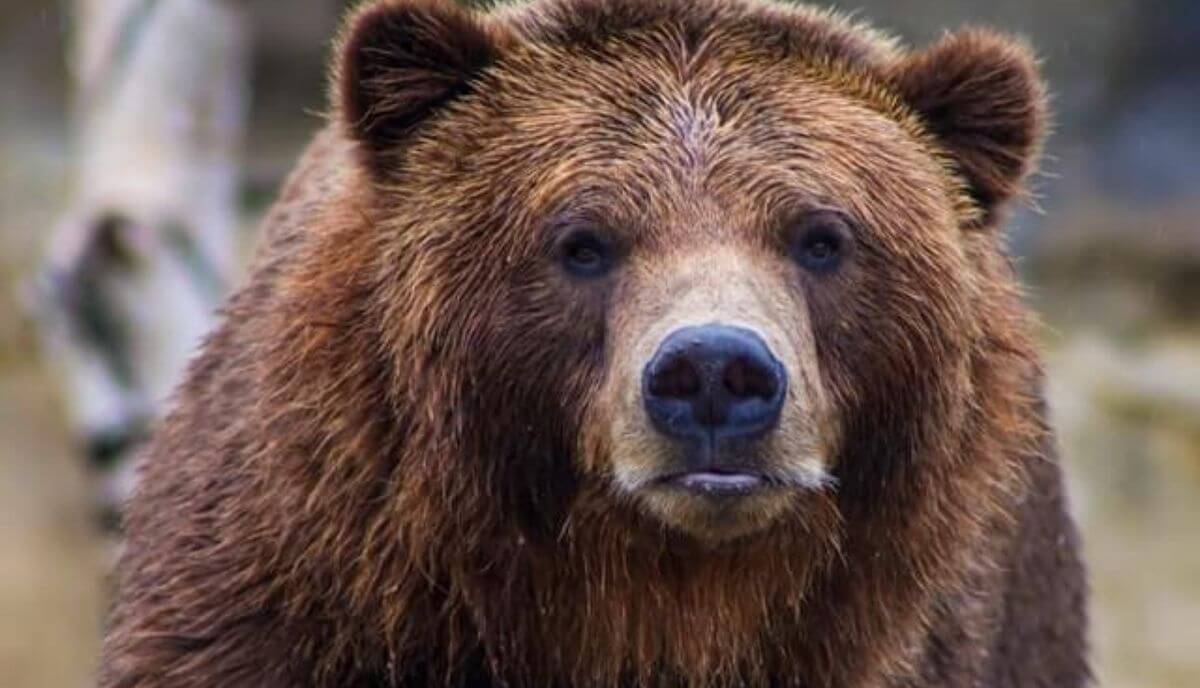 Grizzlies are one of the scariest creatures that you could face in the wilderness. These giant animals with muscular bodies would make your blood run cold.

What many people want to know is – Are grizzly bears dangerous? Do they attack people?

Yes, grizzly bears are extremely dangerous animals as they possess immense physical strength in combination with a bite force of almost 1,000 psi. However, humans are not grizzly’s usual food source, and they would only attack when they are surprised or threatened. Female grizzlies are particularly dangerous because they are most likely to attack if they sense danger to their cubs.

Why Are Grizzly Bears Dangerous?

Let us explore further and see what makes these massive bears so dangerous.

Despite their big, heavy, and muscular bodies, grizzlies are faster than an average dog, and they can reach speeds of 35 mph. In fact, they are the second fastest bear species in the world.

In a matter of 7 to 8 seconds, they can cover 100 yards. And not only that, they can run, maintaining the top speed for an extended period.

Grizzly bears are extremely powerful, and they are considered to be one of the strongest bear species in the world. They stand 3.3 feet tall and weigh up to 1,300 pounds – they are as scary as they seem.

They are equipped with large paws that can be 5 inches wide and 7 inches long. At the tip of their paws are razor-sharp claws powerful enough to cripple any creature alive.

When it comes to raw strenght, grizzlies can lift over 1,000 pounds, 0.75 of their body weight.

There are many ways to measure strenght, and one of the most common measurements is jaw and bite strenght. Grizzly bear teeth bite strenght placed in the top 10 most powerful bites in the whole animal kingdom.

With an astounding bite force of 975 psi (pounds per square inch), these giants can crush a bowling ball with their set of choppers.

Another reason that makes grizzlies dangerous is the fact that they are largely solitary animals. Solitary nature means that the animal prefers feeding and inhabiting alone unfettered by the company of other animals, including humans.

Trespassing in their personal space may awake the animal’s inner aggression. And a disturbed bear is a dangerous bear.

Yes, grizzly bears do attack humans. About 40 grizzly bear attacks are recorded each year; a majority of these attacks are from protective female grizzly bears with cubs rather than their male counterparts. In North America, on a yearly average, 11.4 grizzly attacks on humans occur, while less than two people per year end up being killed by a grizzly bear.

One of the recent fatal scenarios took place in Alberta, Canada. A woman went hiking in bear country with her two dogs, and only her dogs returned for the hike. Later, after a search party was dispatched, her body was found. It was reported that she was attacked and killed by a grizzly bear feeding from a carcass that felt she was there to steal its food.

Grizzly bears are wild animals and therefore seem to act irrationally. Consequently, it is wise to take severe safety precautions to avoid misunderstandings that might lead to an attack.

An animas’ view of us as not prey but rather contenders cannot be overemphasized. Grizzly bears are omnivorous, therefore they have a variety of food options to pick from.

Normally, bears do not eat humans, and they are not very eager to add you to their menu list (unless starving). Instead, they might attack you due to the three most common things.

Why Do Grizzly Bears Attack Humans?

In order to understand grizzlies and to prevent a potential attack, you should understand why and when these attacks happen.

For centuries, grizzly bears have had face-to-face encounters with humans, and it was not a pretty one. Hunters have invaded their space with all sorts of weaponry, sneak attacked, and overpowered them.

Grizzlies’ poor hearing and eyesight have made every sneak attack successful. It is no wonder that even in this day and age where there are prohibition laws set up against hunting grizzly bears, they still feel threatened by human presence.

It is a normal response from animals to be startled when taken by surprise. Grizzly bears just get aggressive as a response. Therefore, it is good practice to make a lot of sounds to announce your presence when in grizzly bear or any bear territory.

Grizzly bears are omnivores, and they do not see humans as prey. If a grizzly bear comes at you, even when you do not startle them, it is probably because of what you have on you that smells real good – food.

These bears have an amazing sense of smell compared to their sense of sight and hearing, they can smell a dead carcass, a fresh kill, and even a food basket in your bag pack or a portion of food hamper in a camp from miles away.

Therefore, grizzlies will become aggressive with you if the food they have smelled from miles away is on you.

So whenever you’re taking a trip to bear territory, make sure to drop your food basket in the car, or if at a campsite in bear territory, hang food hampers high up in trees and not inside the tent with you.

Considering their history with humans, grizzly bears usually want nothing to do with humans. They might see a human from a distance and proceed to go in the opposite direction.

But mind you, when humans get too inquisitive and have no boundaries, grizzly bears will not hesitate to stand up to them.

Grizzly bears might be solitary animals or territorial, but they will attack any animal, humans inclusive if they feel their space has been invaded or threatened.

The same thing goes for their cubs. Mother grizzly bears, in particular, are very sensitive about their kids. Get too close, and you’ll get swiped!

However, early 2020 was rather an unusual year where four cases of grizzly bear attack fatalities were recorded in Montana, Yellowstone, and Canada.

For comparison’s sake, tigers kill around 50 people per year worldwide, while elephant-human conflicts result in more than 500 people being killed.

While grizzly bears are generally peaceful animals who rarely attack people, they can be quite aggressive. Grizzly bears usually choose to avoid humans, however, they can quickly turn into aggressive and violent if provoked. Not trying to disturb grizzlies by trespassing their space or scaring them will reduce potential aggression to a minimum.

As the human population developed over time, grizzly bears’ aggression towards people has also increased, and now it is more common.

Humans need more land to accommodate and support their growing population, therefore grizzly bears, as well as other bears’ boundary has been compromised and encroached.

As a result, grizzly bears are forced into situations of bumping into humans and having their territories invaded now more than ever before.

Considering their size and unfavorable limbs in climbing and escape, grizzlies have resorted to becoming even more aggressive to defend themselves.

Why Are Grizzly Bears Aggressive?

The following are some of the most common reasons that may trigger aggressive behavior in grizzly bears.

Female grizzly bears have a low productivity rate. On average, black bears reproduce about 12 – 14 cubs yearly. Nearly half of these cubs might not make it past infancy and another half through the Juvenile stage.

There is a high chance of at least five cubs surviving past these stages, so mama bear doesn’t have much to worry about. But that is not the case with grizzlies.

A female grizzly bear births an average of 2 – 3 cubs a year – this isn’t the case all year. Considering all the competition for food and territory amongst other bears alike and wolves, chances are none of a grizzly’s cub would survive the infant or juvenile stage.

Protecting their population is one of the most common reasons why grizzly bears are aggressive.

Adult grizzly bears are usually overweight to support their body up a tree. They also have their 3.5 inches long claws that were made for digging and not for climbing.

And even if a grizzly bear is not overweight or does not have insanely long claws for climbing, its habitat is a wide stretch of open lands with little to no tall trees to climb.

Grizzly bears have probably realized this fact and decided it would be best to stand their ground and scare the living daylight out of humans and other bears to avoid situations that would require them to climb trees.

Grizzly bears are not humans; they do not want to halt and have a conversation with you as to why you are around when they are snacking away at their stolen or hunted carcass or why you had to sneak up on them and surprise them.

They don’t understand that all you want to do is to take cool pictures with their adorable cubs for the gram and nothing else.

Grizzly bears are wild animals and should be respected and treated as one because they cannot be rational like we are – at least most of the time.

They’ve had a long history, dating back to their ancestors, of sneak attacks and up till this day of humans hunting them. Therefore, they have more than enough reason to be aggressive towards us.

Grizzly bears are more aggressive than black bears. Black bears are smaller in size, have shorter claws, and live in areas populated with trees, if they are not scaring away their threat, or they are in no mood for confrontation, they can always hop on a tree and be on their merry way.

But, grizzly bears are the complete opposites in size. They also live in open areas like rocky lands and lands with little or no trees.

The only option is to stand their ground and be more aggressive to discourage the intruder.

You might be surprised to notice that a grizzly bear would scare you by being aggressive, and once you retreat, they’ll stop and run in the other direction.

Still, do not try your luck; you do not want to be anywhere near an aggressive grizzly bear!

How to Survive a Grizzly Bear Attack?

In order to be on the safe side and avoid a grizzly bear attack, you should be detouring the anima’s habitat. However, if you happen to find yourself near one, here are the key factors that will help you stay unharmed.

In summary, considering their size and strength, grizzly bears are dangerous to humans. Grizzlies are naturally peaceful animals, however, if not treated properly, they can quickly flip their non-aggressive behavior into violent. In order to prevent an attack from a grizzly, you should avoid places that they inhabit, especially during summer.

Thank you for reading. Hopefully, in this article, we resolved the one million dollar question called “are grizzly bears dangerous”.

If you liked this article, here’s a recommendation of a similar read: How Dangerous Are Lynx?