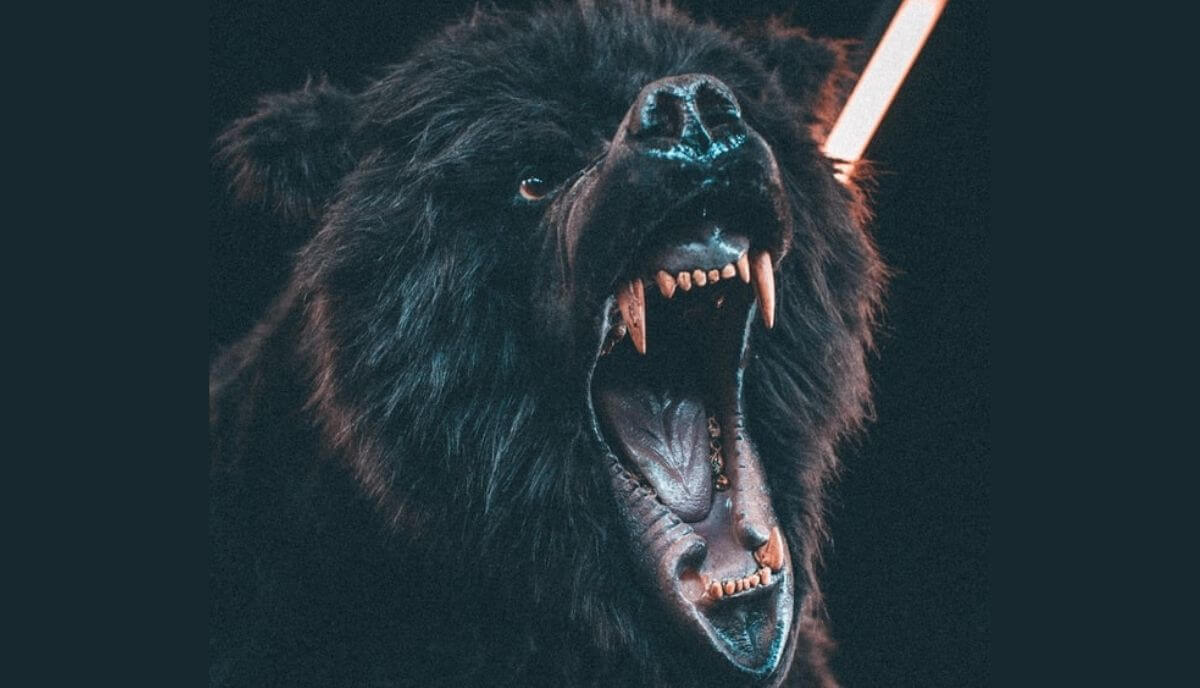 There are eight different species of bear worldwide, all in the family Ursidae. They are usually apex predators or some of the largest land animals in their respective habitats.

The polar bear is the largest species, standing up to 10ft tall and weighing up to 1000lb on average (though there are bears that have been recorded at over double that weight!). The smallest bear is the Southeast Asian Sun bear, which grows to less than 55-inches and typically weighs between 55- and 140-pounds.

Despite their differences, all bears share a common ancestor, which was omnivorous. As such, modern bears are generally considered omnivorous, although their diets differ from species to species.

Bear teeth are typical for an omnivore and perfectly adapted to their diets. So what makes bear teeth unique?

What Kind of Teeth do Bears Have?

Bears are heterodonts, which means they have different teeth types that perform different jobs. By being omnivores, bear teeth are used for both meat-eating teeth and plant-eating teeth.

Their teeth are made up of 12 incisors, 4 canines, 16 premolars, and 10 molars. Bears have 42 teeth in total, which is ten more than humans.

Like most animals, their jaws are symmetrical, with even numbers of each type of tooth on both sides. They have the same teeth on the top and bottom jaws, apart from their molars, of which there are three pairs on the top jaw but only two on the bottom. 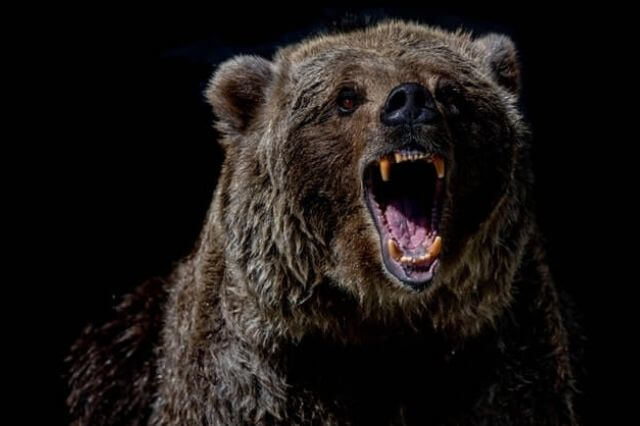 What do Bears Eat?

Every species has a different diet, but bears eat just about everything! Most of their diet is a combination of meat (such as rabbit, seal, and deer), fish, carrion, insects, fruit, nuts, seeds, leaves, shoots, and other plant matter.

What do Bears Use Their Teeth for?

Different teeth are used for different things. In bears, their four types of teeth are adapted to tackle both meat and plants.

Incisors are small, straight, chisel-shaped teeth located in the front of the mouth. They are used for biting and are great at cutting and grabbing food. Bears have very sharp incisors, which they use to cut through meat and rake the forest floor and slice through shoots and stems.

Canines only exist in meat-eating animals and are the longest teeth in the mouth. They are located behind the incisors. The canines are sharp and pointed and are mainly used to grab and kill prey. They are perfectly shaped to puncture tough hide and flesh. For this reason, they are sometimes called “fangs.” Bears use their canines to kill their prey or tear into logs to find grubs. They also use them to break open beehives to get to the honey and larvae.

Premolars are found between the canines and molars and are sometimes known as “cheek teeth .”They are mainly used to chew and grind food. In meat-eaters, they are a kind of hybrid between canines and molars. They are sharper than molars but broader and flatter than canines, making them suitable for both cutting and grinding down foods like raw meat. As omnivores, bears have another exciting feature: a diastema. A diastema is essentially a gap between the premolars and the teeth at the front of the mouth, and is usually found in plant-eating animals. Bears and other plant-eaters use this gap to grab twigs and plant stems and strip leaves off branches by sliding them through the gap.

Molars are broad, flat teeth at the very back of the mouth, used for grinding and crushing. Because of their position in the jaw (closest to the pivot point), these are the teeth with the most bite force behind them. Bears use their molars to grind up meat, as well as crush nuts, seeds, and bone. 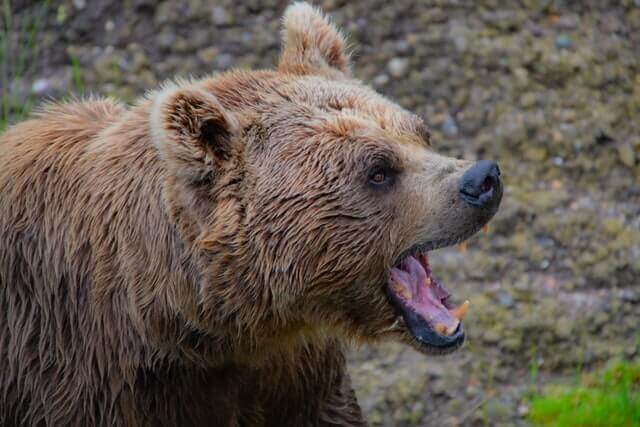 How Big and Strong are Bear Teeth?

Bear teeth range in size, depending on the species. Polar bears have the largest, at up to 2-inches, while black bears have the smallest at up to 1-inch. All bears have relatively small teeth for their size, but they are sharp, and a bear’s bite is exceptionally powerful.

A polar bear’s bite is a whopping 1,200 PSI, closely followed by the grizzly at 1,100 PSI of bite force. This allows bears to break through the bark, flesh, and even bone without a problem.

The power actually comes from the bear’s jaw muscles rather than its teeth. A bear’s bite force is, on average, comparable to that of a tiger and is powerful enough to crush a bowling ball!

Read Also: Can Bears Be Friendly?

Do Bears Have Milk Teeth?

Like humans and many other mammals, bears are diphyodont. This means that they grow a set of deciduous or milk teeth as babies, which fall out to be replaced by more prominent adult teeth as they grow.

Bear cubs will start getting their adult teeth at around 5 months and have a complete set by about 18 months, though their canines will continue growing for several more years. If it happens to lose one, you can tell a bear’s age by its teeth.

During hibernation, a dark pigment forms on the outside of the teeth, which you can count like the rings on a tree. As bears hibernate every year, the number of rings equals the number of years the bear has been alive.

How do Bear Teeth Differ Across Species? 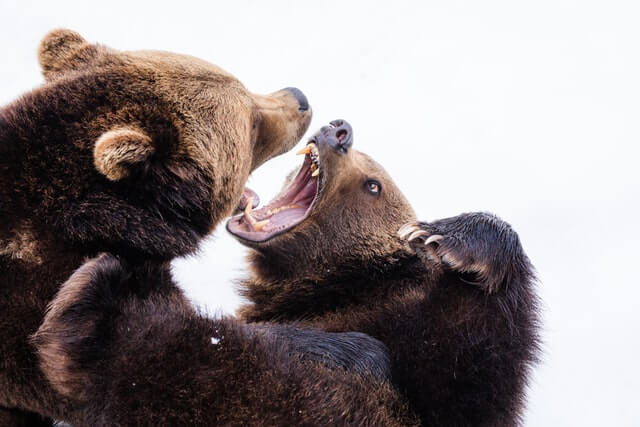 The strongest bears in the world, polar bears, live exclusively above the Arctic Circle, where relatively few plants grow. They are hypercarnivores, meaning that over 70% of their diet is meat.

Their diet is mainly made up of seals, but they will eat fish, crustaceans, deer, carrion, and plants if they find them. They hunt seals through holes in the ice, waiting for them to come up to breathe.

Because of this, they need to be stealthy and catch their prey in one bite.

Polar bear teeth are sharper than those of other bears and curved back into the mouth, making it much harder for prey to slip away once in their jaws.

Their premolars are also sharper and slimmer, more like those of other carnivores.

Brown bears are highly variable in size, depending on their region, with some growing as large as polar bears. Their diets are equally variable.

Some, such as the brown bears of Alaska, get most of their nutrition from salmon. Others, like the Yellowstone grizzlies, can get up to 90% of their calorie intake from fruit, nuts, plants, and insects.

Brown bears can and will eat anything from acorns to elk and are efficient at hunting and gathering.

Brown bear teeth reflect their dietary versatility and are similar to some other bear species. They are generally more robust and larger.

Because they eat meat, they have sharp, curved incisors, like the polar bear.

The black bear’s diet consists of over 75% plant matter. The little they get from animals comes from insects and occasionally fish and deer fawns.

As they are not very predatory, their teeth are not as sharp as those of their more carnivorous cousins, and their incisors are straighter.

Black bear teeth are undoubtedly sharp and large enough to catch prey and slice meat but are more often used to cut and grip plants or crush nuts and seeds.

They are known to have a particular fondness for honey and will use their long canines and sharp claws to tear apart the hive.

The sun bear is the smallest bear species and feeds mainly on honey, insects, fruit, and plants, though they will sometimes supplement their diet with small reptiles or eggs. The sun bear has an exceptionally long tongue, which it uses to poke into termite mounds and suck up the insects.

It also has powerful claws that break apart insect nests or strip away bark from trees. One would assume this means its teeth are comparatively small, but for some reason, they are huge for the bear’s size.

Experts suggest this may be to help it break open hardwood trees to get to the grubs inside, but so far, there isn’t a clear explanation for their impressive teeth.

The spectacled bear is a primarily herbivorous species native to South America. Only up to 5% of their diet is meat, so these bears are not considered predatory.

They eat all different kinds of plant matter but specialize in pineapples, sugarcane, tree bark, and palm nuts, which are too harsh for most animals to get into.

For this reason, they have firm jaw muscles and teeth that are better adapted for grinding tough plants than other bears.

The giant panda is at the other end of the spectrum from the polar bear, as it is almost entirely herbivorous. Despite this, it retains many characteristics from its meat-eating ancestors, such as large canines and a short digestive tract.

As such, it is highly specialized at eating one thing in particular: bamboo shoots. Because its carnivore-like digestive tract is not well adapted to breaking down vegetable matter, pandas do most of the work in their mouths.

Pandas have massive jaw muscles – giving them their characteristically round faces – and large molars, both designed to grind down the huge amounts of bamboo they need to eat every day.

Because of the challenges global warming is creating for animals worldwide, many are faced with adaptation or extinction. Polar bears are particularly precarious, and their numbers are dwindling rapidly.

Many are forced to move south into brown bear territory, searching for food. One might think this creates conflict, and indeed it does, but it also appears to be creating hybrids. Once believed to be cryptids, polar/grizzly hybrids – otherwise known as “pizzlies” or “grolars” – are starting to occupy a niche neither of their parents is as well adapted to.

They share characteristics with both polar and brown bears, including their teeth. Maybe we will see the rise of a new species in the not-so-distant future, with its very own set of unique teeth!

Thank you for reading. Hopefully, this article on bear teeth was informative and fun to read.

In the end, here’s a recommendation of another popular read: Can Bears Be Tamed?