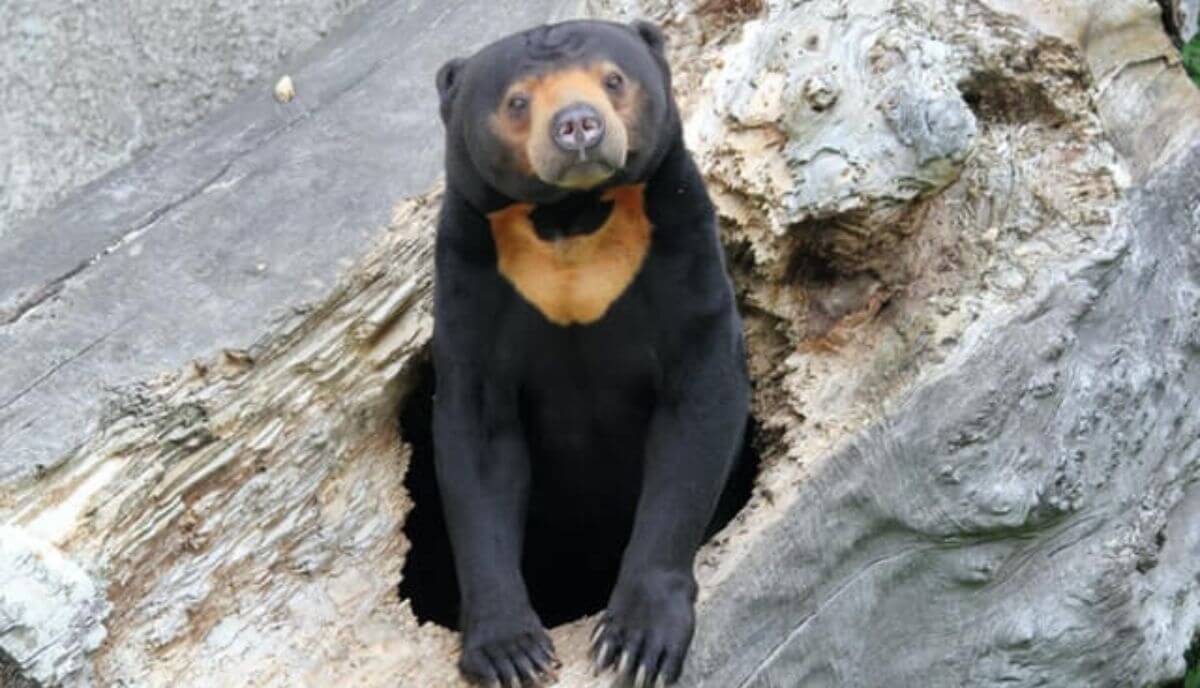 I remember reading an article about a Malaysian singer arrested for keeping a sun bear in her apartment. At first, she said, she thought it was a dog.

Neighbors called the police when they saw a bear roaring from the apartment window. This bear was just a cub, but would she be in danger if she kept it until it had grown?

So, this story made me wonder if sun bears are dangerous.

Like all other bear species, sun bears can be extremely dangerous. Even though small in size, sun bears are still powerful wild animals equipped with large claws and sharp teeth. There have been cases of sun bears attacking humans in the wild, and some of these incidents caused severe and even fatal injuries.

Sun bears are probably one of the cutest bear species, but they pack a punch when they become agitated. Looks are often deceptive, which is true in the case of sun bears.

They look like social and friendly bears from the outside, but they are still wild animals.

Their cute face and golden crescent on the chest make them look cuddly, but they are dangerous and fierce. The same goes for their relatives, pandas – who can also be dangerous.

Their Size is Deceptive

Sun bears weigh up to 150 pounds, which is the least of all the bear species, and it is also half the size of an American black bear.

Even some dog species can weigh more than a sun bear. Nevertheless, this doesn’t mean they should be joked with.

In addition to their sheer strength, these wild animals have long claws and sharp teeth that can cause serious injuries.

Sun bears are also quite fast, and they can run up to 30 miles per hour (faster than almost any man alive).

Mass-scale deforestation for industrial purposes is endangering many wild animals. It is also causing their habitat to be closer and closer to human settlements.

In the past, there were rare cases of sun bears attacking humans. Unfortunately, these numbers are increasing.

Sun bears live in the jungle and are adapted for arboreal life. With their natural habitat decreasing, the animals are more stressed, often hungry, and without a place to hide.

Stressed animals are more likely to attach without being provoked.

Usually, sun bears are not aggressive toward humans unless provoked. Still, sun bears have become more aggressive because of deforestation and the overwhelming threat caused to their habitat.

Also, female sun bears are considerably more aggressive when their cubs are around.

In general, these bear species were scientifically found to be reclusive and shy, spending most of their time in trees. However, external influences seem to affect their nature.

The threat caused by predators, oil-plantation business enforced deforestation, poaching, and hunting are also some of the reasons for its increasingly aggressive temperament.

Even though these animals are not predators, sun bears do attack humans. In recent times, an increasing number of attacks by sun bears have been reported. The increased destruction of their natural habitat has led to more human encounters, especially in the areas where palm oil and rubber plantations have replaced the jungle.

Sun bears seem to move out of their habitat in search of food, resulting in more human attacks.

Even though the numbers are increasing, attacks and encounters are not very common. Luckily, we are not on the sun bear’s regular menu, so they won’t attack humans because of a food source.

However, people who come across these animals should try to move away and not provoke them because a triggered sun bear will attack humans.

Can a Sun Bear Kill You?

Sun bears can kill you if they attack you. Sun bears have strong claws and teeth, more than enough to tear down and kill a human. They have the strength and tools necessary to inflict a significant injury or subsequent death.

In 2017, a sun bear killed a woman while she and her husband were walking through their rubber plantation. Her husband survived but was heavily injured, while his wife died due to the attack.

Sun bears feel more threatened by humans than ever before, mainly because of poachers. Humans hunt sun bears for their skin, teeth, claw, gallbladder, meat, etc.

Because of this, sun bears consider humans an imminent threat. Female sun bears are also hunted for their cubs to be sold on the black market.

For this reason, female sun bears are found to be highly aggressive toward humans.

Has a Sun Bear Ever Killed a Human?

Yes, several incidents of human death have been reported in various parts of its habitat in the 21st century. Due to the rise in man-bear conflict, such incidents have risen considerably. Deaths and injuries due to sun bear attacks have been reported in India, Malaysia, Thailand, Indonesia, and other Southeast Asian tropical regions.

Human-imposed threats have been attributed as the number one reason for rising human killings by sun bears.

In 2017, a 9-year-old boy was brutally attacked by a sun bear near the forest region of Taman Negara National Park in Malaysia.

The father and son duo were also attacked near a river and were seriously injured in the process.

What Do You Do if You Encounter a Sun Bear?

Because of their size and looks, sun bears are not considered a threat by many. That is entirely wrong!

When you encounter a sun bear, the first thing you should do is never run or turn your back on them. They switch to aggressive mode as soon as they see this defensive tactic.

If you notice a sun bear in the distance, you should first try to walk backward to avoid contact slowly.

Do not make sudden moves or shifts that could be interpreted as aggression. If the sun bear starts to show signs of aggression towards you, make yourself look as large as possible.

Slowly raise your hands above your head to look taller. Do not try to run away or climb a tree. In most cases, the bear doesn’t want to attack you; it just wants to be left alone.

So slowly leave the area without further provoking the animal.

If you go to an area where there is a possibility of encountering sun bears, it’s advisable to carry bear spray with you.

Sun bears are the smallest bear species in the world, and while they seem harmless, they are actually dangerous. Like most bear species, sun bears can be aggressive, and they are known to attack people.

Sun bears can kill a person, even though they are naturally timid and reclusive. In recent times the number of attacks has been increasing due to the destruction of their natural habitat.

With less and less jungle, sun bears are more likely to encounter people.

Sun bears are declining every passing year, and with a steady decline in their numbers of almost 30% in the last three decades, it is now classified under the vulnerable category.

They need our preservation and care to live on Earth.

Thank you for reading. With this, we conclude the “are sun bears dangerous?” article.

If you liked this post, here’s a recommendation for another popular read: Are Sperm Whales Dangerous?