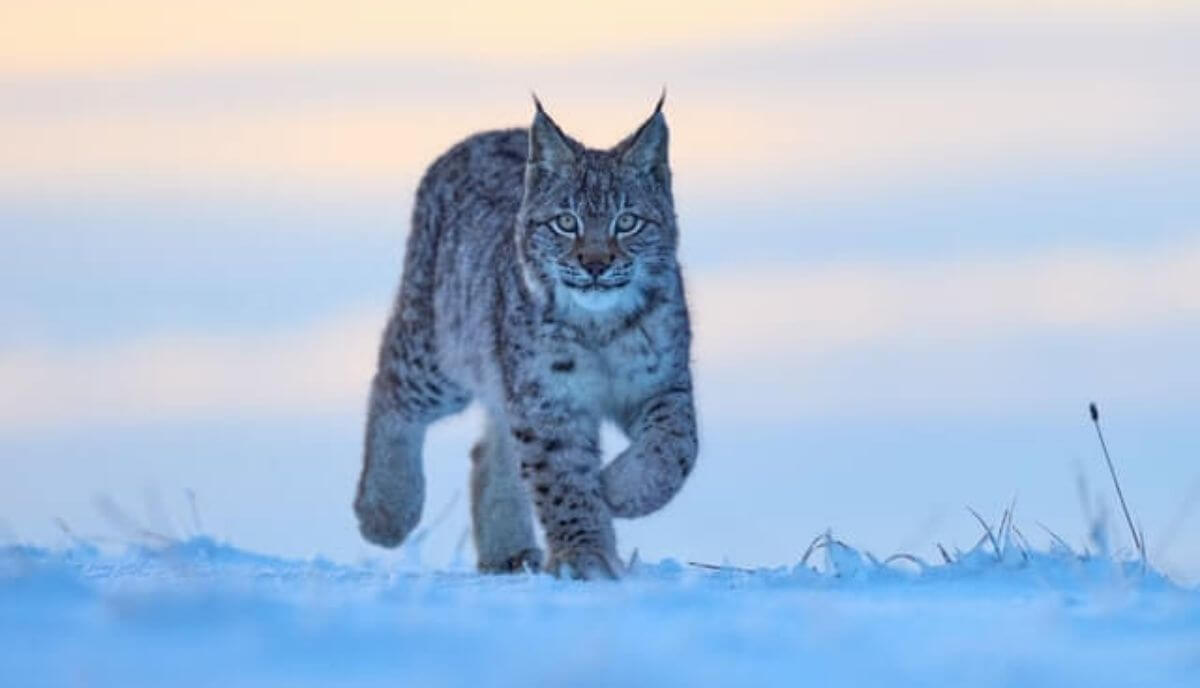 Some day ago, I accidentally stumbled upon a wild lynx who was climbing up on a tree. We had that second of eye contact, and his gaze appeared somehow cold and sharp. At that very moment, I wasn’t sure if I should run away or stay still. Luckily, the animal decided to flee high up on trees.

Once I came home, I’ve googled “are lynx dangerous?” but couldn’t find a detailed article. So I’ve decided to write one. Here’s a quick answer, and further on I will go into more details.

Lynx, by nature, are not dangerous to humans. However, similar to many other wild animals, they wouldn’t hesitate to defend themselves by attacking if they feel cornered, threatened, or trapped. Though there is no record of a lynx attacking humans, wildlife experts still warn that these are wild animals and can be potentially dangerous when put on a threat.

When it comes to humans, lynx are not extremely dangerous and do not pose a real threat. These solitary cats prefer keeping themselves away from humans’ or other animals’ presence. Also, they are nocturnal, which means they are active at night and hunt when it is dark, and this further slims down the chances of contact between humans and lynx.

While lynx do not represent a threat to humans, they are capable of causing injuries to people with their sharp fang teeth and powerful claws. Therefore, it is advised to keep away from them if you happen to come across one, the chances of which are slim.

The lynx is actually a cute-looking animal that looks like a bigger version of domestic cats. They appeared friendly that you would want to go near them and pet them just like you would your pet cat. But is it safe to do that? NO!

Lynx are referred to as shadow killers, which means they sneak up on their prey and jump on them by going for the throat. The bite features of lynx’s razor-sharp teeth can be considered their most dangerous aspect.

In general, lynx do not attack humans. There is no single recorded incident about a lynx attacking humans. As mentioned earlier, they are solitary animals that prefer to be left alone and don’t want anything to do with humans. Experts also suggest that lynx are so shy that they would rather run away than have to come face-to-face with a person.

But, if you change the question slightly and ask, “can lynx attack humans?”, the answer would be entirely different.

In theory, yes, lynx CAN attack humans. Though it has never happened in the history of humankind, simply because these wild cats see humans as threats and run away from them, they are, however, very much capable of attacking a human.

With their natural ability to reach speeds of up to 50mph, lynx can easily attack a human in its natural environment, if it feels threatened, cornered, or trapped. In such circumstances, if the attacked person is able to defend themselves, they will be able to survive with just a few minor injuries.

Of course, this is all hypothetical, and regardless of all the tales that you hear about these animals, there is no documented evidence of lynx attacking humans.

Even if they enter the human habitat for some reason, they would rather prefer to remain in hiding and wouldn’t come forward to attack, as long as they are not approached or attacked directly.

No, lynx do not eat humans. These wild cats do not prefer to be around humans, let alone attack and eat them! One of the reasons why lynx avoid humans is because people are much larger than them, and lynx find the risk to be too big.

Depending on their habitat, lynx feed on smaller animals like hares, rabbits, beavers, pigs, deer, and rodents.

Even though people are often the target of attacks of many animals, there are very few man-eater animals in the wilderness. Not including the scavengers that will feast on corpses, given the opportunity, animals like polar bears, crocodiles, tigers, lions, komodo dragons, and hyenas are most commonly animals included in human hunting.

Yes, lynx are aggressive animals, but mainly towards other animals of the same or different species. Regardless, humans have nothing to worry about because these wild cats because they usually tend to run away when they come across people and do not become aggressive unless they are cornered.

A lynx is a type of wild cat, medium in size, covered in brown or yellow fur, and some of these animals also have spots on their fur. Typically found in the cold regions of Europe, Asia, and North America, these cats have various adaptations.

Specialized thick coats help the animal endure very cold weather, while their big padded paws make it easy for them to maneuver even in thick snow.

Nature gifted it with adept hearing and eyesight, making it a skilled predator that is able to spot small prey from more than 250 feet away. Lynx can grow up to 44 pounds in weight and 24 inches in height and can reach speeds of up to 50 miles per hour.

When going after the prey, the lynx will try to sneak as close as possible and then quickly pounce on its target, using its canine teeth to inflict a bite of death.

With all these characteristics, it wouldn’t be hard for a lynx to get aggressive and hurt a person when they approach it or make it feel trapped or under attack.

FAQs On How Dangerous Are Lynx

Lynx are perhaps the only variety of wild cats that look very similar to domestic cats. But, despite their cute, fluffy, and adorable appearance, they are still wild animals and can be dangerous to humans when provoked.

In this section, we answer some of the frequently asked questions on how dangerous lynx are:

Has Anyone Been Killed by a Lynx?

While there are reported incidents of lynx attacking and killing domestic animals, there is no documented evidence of them killing a human. These shy and solitary cats do not like to be disturbed or approached, and when they are given their space, they stay away as far from humans as possible. Lynx are small in comparison to an average person, and even if they attack, they would not be capable of taking down a human.

Do Lynx Attack Dogs and Cats?

Although unusual, yes, lynx do attack dogs, and many incidents prove the same. Such attacks are surprising for animal experts, as they feel that it is not typical lynx behavior. But, they also add that this could be because of the decline in the population of the wild cats’ natural prey – hares and other animals. On the other hand, the incidents of lynx attacking domestic cats are rather minimal, at least when compared to that of dogs.

How Do Lynx Protect Themselves?

Though they typically avoid humans, lynx may take a defensive stance if threatened. They can become fierce and use their speed, canines, and claws to attack a threat. However, lynx will also use their keen senses and camouflaging strategy to keep themselves hidden from the danger.

Lynx are experts at sneaking and hiding, so they rarely have to deal with their predators face to face. Apart from humans, the main lynx predators include wolves and coyotes. However, when chased by these larger carnivores, lynx will often find their safety high up on trees.

What To Do If You Encounter a Lynx?

As mentioned lynx are shy animals and they will more often than not try to avoid people; however, in case you encounter a lynx, here is what you should do:

In summary, lynx are not dangerous to humans as they are naturally shy and non-aggressive cats that will rather flee than attack. While lynx do not pose an active threat to humans, it is best to stay away from these wild cats and let them be to avoid any potential conflict.

While the chances are minimal, if you do come across a lynx, avoid approaching it or offering it food, and always remember to keep children and pets away from it. A lynx’s instinct would be to run away from you, but even if it seems to act otherwise, it is best to maintain a distance from your end.

If you are ever attacked by a lynx, do not lose eye contact with the animal and back away slowly. Throw your hand in the air to make yourself look larger, and make loud noises to intimidate the animal. If you have pets, be wary at all times.

And you’ve come to an end of the “are lynx dangerous” article. Thank you for reading. If you liked this type of article, here’s a recommendation of a similar read: Are Koalas Dangerous?