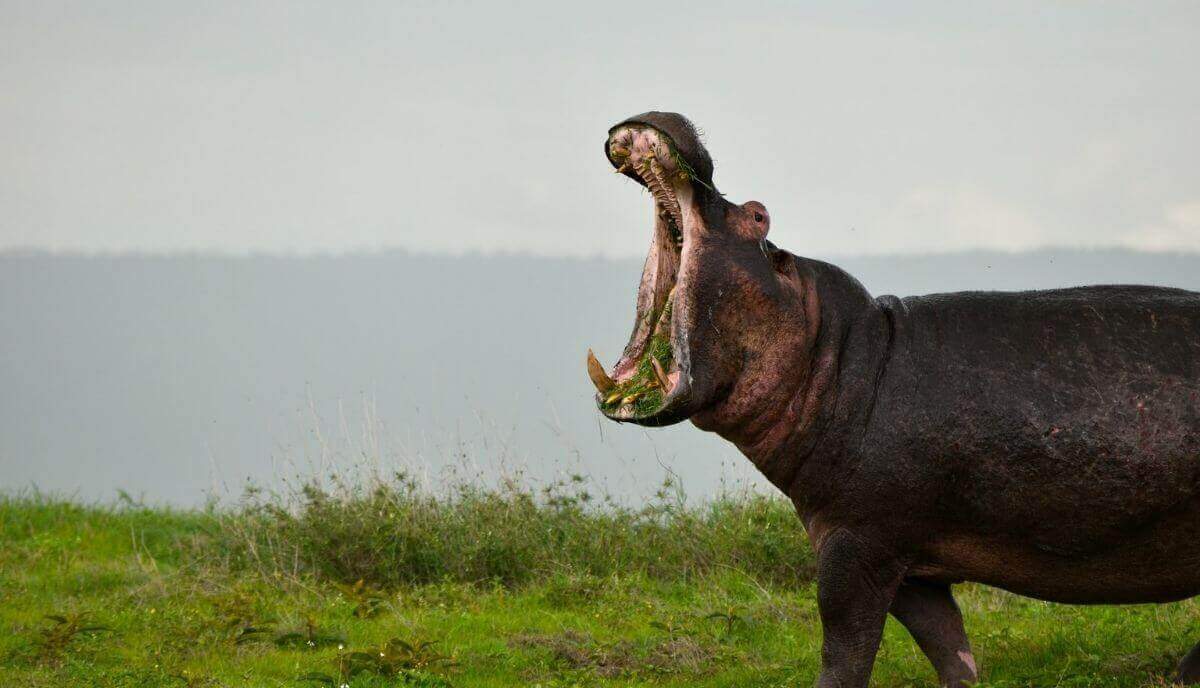 The first time you saw a hippo in your local zoo on or safari tour, you wondered if any animal would hunt these bulky creatures.

It is hard to imagine that even giant such as the hippo has natural predators. So what eats a hippo?

Besides humans, who are the largest hippo predators, lions, hyenas, crocodiles are the most common animals that kill and eat hippos. However, most predators rarely target adult hippos due to their size and strength. On the other hand, hippo calves have been commonly eaten, especially when unprotected and separated from the herd.

Hippopotamus adores water. These semi-aquatic mammals spend two-thirds of their life submerged. But, after the sun comes down, they go on land to do their second favorite action – grazing.

Hippos are the second-largest land animals, right after elephants. Due to their intimidating size and brute strength, not many animals dare to confront them.

However, despite the colossal size, there are always dangerous predators waiting for their perfect moment.

The main hippo predators are:

Lions are one of the biggest predators of hippos and herbivores, in general. These big cats are Africa’s finest predators, and they will utilize cooperation in their favor.

Lions are aware of all the hunting tricks as they are quite experienced in killing huge animals.

But even the mighty kings of the jungles know better than hunting hippos and would rather go for more obvious prey, such as wildebeest, impalas, or zebras. If they do not face food scarcity, lions usually do not put themselves at risk of being injured by the hippo.

No lion would single-handedly go after this semi-aquatic creature.

To take down a fully adult hippo, lions would have to harness the power of the entire pride. Still, in most cases, lions target younger, less defenseless, tinier hippos that are generally much easier prey than grown ones.

Lions would wait ambushed for the hippo to come out of the water and corner the animal strategically. If everything goes according to plan, lions would drag a hippo down and focus its neck to make the animal defenseless and reduce the risk of being injured.

Despite not being as large as other carnivores, hyenas are one of the most powerful predators in the wilderness. In fact, according to Nat Geo, hyenas are the most successful African hunters.

However, even for the very best predators, hippos are no-go, especially if food is abundant. Hyenas would usually eat antelope, wildebeest, gemsbok, and smaller prey such as lizards and snakes.

When it comes to hippos, hyenas are capable of taking down only juveniles. Although, calves are usually protected by their mothers, so generally speaking, hyenas on very rare occasions attack hippos, given the opportunity.

Hyenas act in large numbers, of a few members, to up to 20 individuals. They will use the numbers in their favor biting the prey from every possible angle and knocking down the animal on the ground.

Because of humans, hippos are listed as vulnerable animal species. Habitat loss and poaching make almost 90% of the hippo population crash.

The IUCN estimates that today there are no more than 25,000 hippos left in the world.

Besides the ivory trade, hippos have been regularly hunted because of their meat. Hippo meat has become a popular dish in many parts of Africa.

Pigmy hippos are protected by the law, as their total population is more endangered than common hippos.

However, despite the ban, many people still regularly pouch hippos and bring these majestic creatures to the brink of extinction.

Unfortunately, hippos are not the only example. Dozens of animal species vanish from the face of earth day after day, and all because of our negligence.

If you have enough cash, you can basically go and hunt almost any African animal. Some “hunters” should really reconsider their moral compasses.

Crocodiles are strong and deadly predators, and they are pretty successful at hunting. However, normally crocodiles eat hippo calves and avoid a fully adult hippo.

Crocs diet is usually based on smaller prey, such as fish, crabs, turtles, on other aquatic creatures.

But, If the baby hippo gets isolated, chances are crocs will eat it, just like other predators would do.

As for the adult hippos, crocodiles never attack them as they are so big they can snap them in half. There are several videos online in which hippos toss crocodiles around as if they were toys.

Even though they may seem like calm and peaceful animals, hippos are dangerous and quite unpredictable animals.

Male hippos are especially aggressive and territorial. In case they come across uninvited guests in their harem, they lose their minds.

Also, when claiming the new territory, a new dominant male hippo would kill calves fathered by the previous herd’s alpha. This kind of offspring elimination has also been seen in lions.

Interestingly, hippos are only territorial in water; while they are on land, they usually ignore the presence of any other animal.

Besides unregulated poaching for their meat and teeth, the hippo population is steeply shrinking due to habitat loss.

Agricultural development near wetlands and natural hippo habitats pose a significant threat to the hippo population.

Large-scale expansions pull the water away from the rivers on which hippos are entirely dependent. As human populations grow, the natural habitat for many animals decreases.

We must be responsible and not let such majestic and ancient creatures as hippos are to go extinct.

How Do Hippos Protect Themselves?

The first line of protection is their intimating size. Hippos are much larger than the vast majority of animals, so few will dare to go after them in the first place.

Also, hippos live in groups of up to 30 individuals, called herds. In most cases, they stick together and protect each other in case of a threat.

Apart from that, their skin is six-inch thick, and it serves as impenetrable armor for most predators.

And even if someone tries to attack a full adult hippo, it will encounter a bite force of 1,800 PSI, which is powerful enough to break bones as tree branches.

In Summary – What Eats a Hippo?

The hippo predation is not as common in the animal world. The size and the strength of these water mammals do not leave indifferent any wild predator. Even the most deadly ones, such as crocodiles, lions, and hyenas would rarely risk going after hippos, as the consequences can be fatal.

However, these predators would grab the slightest chance that arises. That opportunity comes in the form of either young hippos or old and defenseless ones.

Unfortunately, animals are not the only hippo predators. The loss of their natural habitat, in addition to frequent poaching, puts these aquatic giants near extinction.

Read Also: What Eats a Vulture?