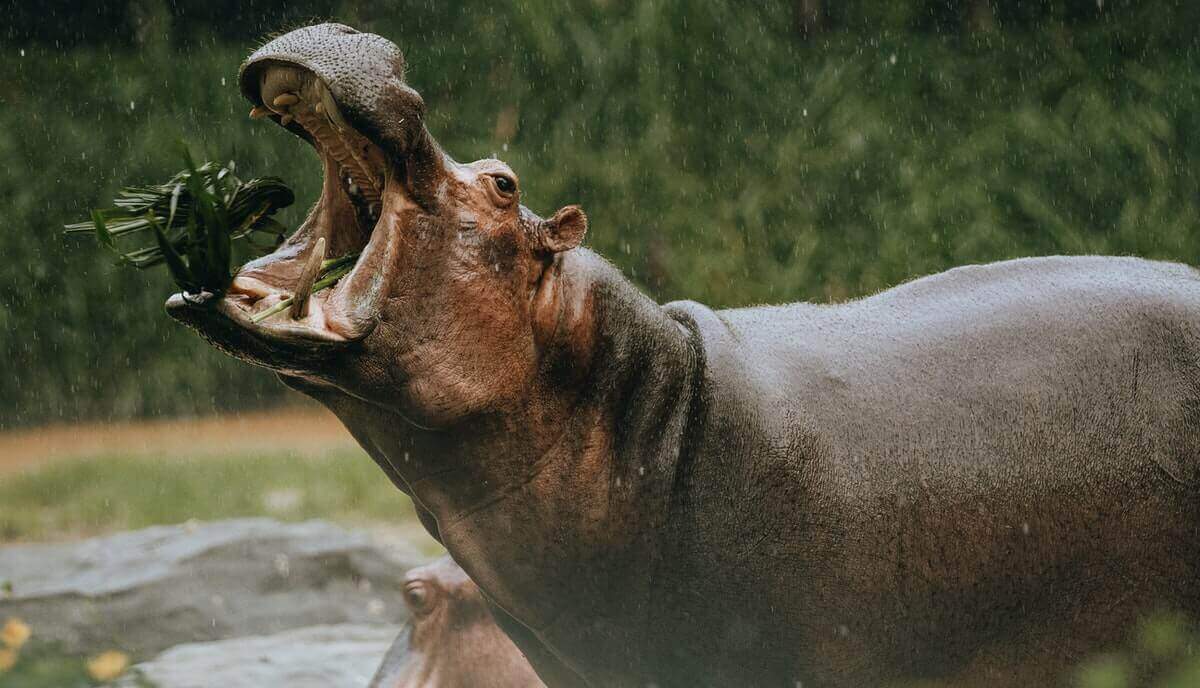 Hippos are the third-largest land mammals on the planet, after elephants and rhinoceros. As a result, an average day for a hippopotamus involves six hours of feeding.

Which leads us to the question, what do they eat? Do hippos eat meat?

Hippos primarily consume plant-origin food, but they do eat meat occasionally. Up until recently, it was thought that hippos do not consume meat at all. However, recent research has revealed that, in rare circumstances, hippos feed on meat and even animal corpses.

In this article, we’ll discuss hippos’ meat consumption and the reasons for such unusual nutrition behavior.

It is no surprise that even though hippos do eat meat, it is not their favorite food. If it was, we wouldn’t have to ask if hippos eat meat – we would probably know because we would see them eating it all the time.

It is up to this day uncertain why and how often hippos eat animal meat since their stomach anatomy is not suited for meat-origin food.

Another possible reason why hippos consume meat occasionally is the lack of nutrients from their normal diet. There is also a theory that discusses signs of opportunism.

Whichever the underlying reason may be, the total number of meat-eating hippos is not increasing. In other words, scientists missed observing these unusual feeding behaviors earlier.

What happens if hippos eat meat?

Eating meat on occasion won’t harm hippos. A few other herbivores in the wild are noted for consuming meat even though it doesn’t come as part of their regular diet.

For instance, deer sometimes eat mice. Also cows, which are the best-known ruminants, have been seen eating birds.

As a result, a rare meat snack won’t be fatal to them. Of course, unless completely change their foraging behaviors and start eating only meat.

Complete transition from herbivore to carnivore diet may cause growth deformity, organ failures, and eventually death.

How often do hippos eat meat?

Only recently have new studies of hippos shown that their diet is sometimes different from what we initially thought.

A Ph.D. student Leejiah Dorward issued a study in the African Journal of Ecology where he recorded, until then very rare incident – hippo carnivory.

In a study, Leejiah covers several incidents in which animals, such as wildebeest, impalas, and buffaloes, were victims of hippos.

Naturally, hippos are not considered predatory animals, meaning they do not hunt other animals for food. These incidents are sporadic and could result from starvation or behavior deformities mentioned earlier.

The same studies also covered the first cases of hippo cannibalism. An adult male hippo was feeding on another hippo’s corpse, who passed away the previous day from fighting injuries.

So, how often do they eat meat? It is hard to tell, but probably more often than we previously thought.

The harder the life conditions are, the higher the probability of hippos eating meat. 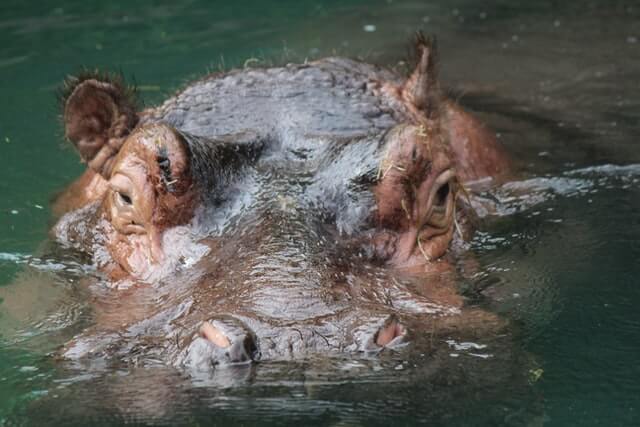 What type of meat do hippos eat?

Hippos spend up to six hours each night feeding on their favorite food – grass. They also like reeds and green shoots, but they avoid coarser grass which is difficult for them to digest. Hippos can consume up to 150lb each night.

Yet, when it comes to meat-eating, hippos are not picky.

A wild hippo meat source includes impalas, baby elephants, wildebeest, buffalos, and other hippos killed by them or other predators.

This is also true for their captivity relatives. Hippos living in zoos were seen eating their first neighbors. Be it wallabies, flamingoes, or tapirs.

However, wild hippos are more likely to eat meat than those found in zoos.

In general, hippos would eat any source of animal meat that is available and easy to obtain at the moment.

No, hippos are not carnivores. As we already mentioned, the majority of their food intake is from plants, while only a small part of hippo individuals eat meat. As a result, a hippo is viewed as an omnivore animal.

Yet, according to Wikipedia, these large animals are still categorized as herbivores. The reason could be because of their fairly recent meat-eating habits.

Another reason hippos are still considered herbivores is that hippos eat meat on rare occasions. Also, only dozens of hippos were noticed with unnatural feeding behavior, not the whole species.

Interestingly, the hippo diet is not the only thing that has been misinterpreted for years. Also, it was believed that hippos were closely related to pigs for a long time.

However, the latest research has shown that their closest relatives are whales and dolphins.

Hippos are the most carnivores of all herbivores animals in the wild. However, meat is not the main food source for hippos. More than 95% of their nutrition comes from grass and other plants. Still, sometimes, a hippo would hunt and eat different animals.

It is difficult to fully understand the direct reason for meat-eating hippos’ habits because their digestive system is not suited for non-plant-based food.

However, carnivory in hippos’ is something that has been here for a long time. Yet, we have missed this phenomenon in the past because of a lack of observation.

Thank you for reading. If you liked this post, here’s a recommendation of another popular read: How Dangerous Are Hippos?