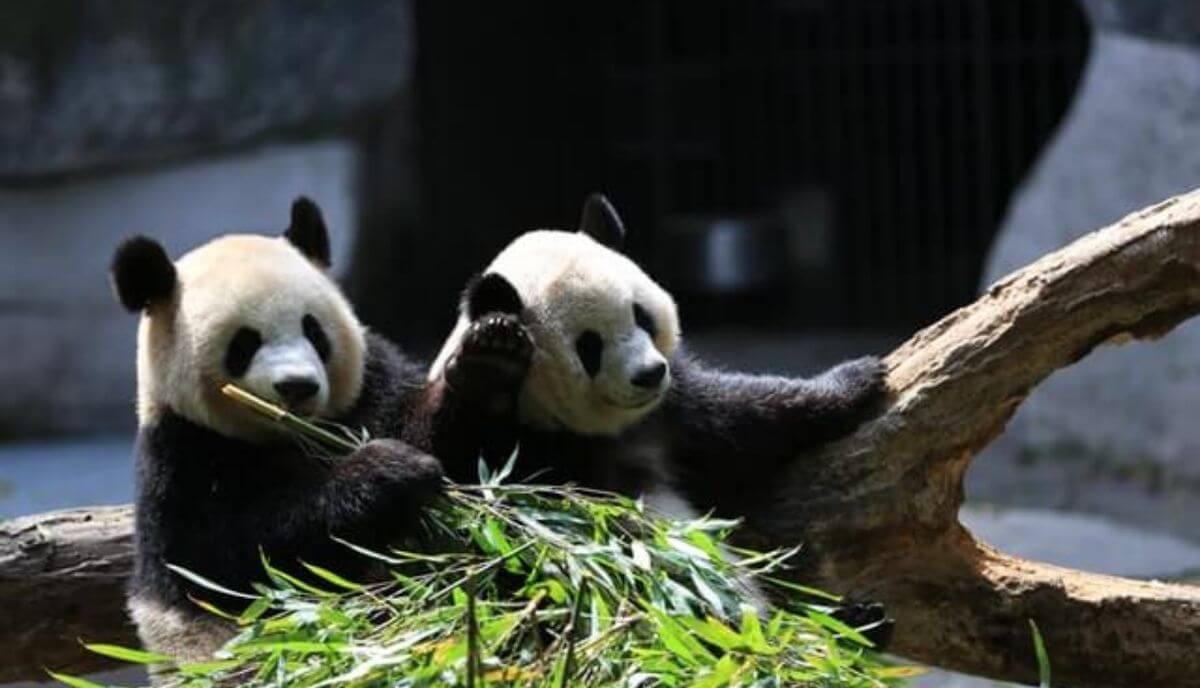 One summer evening, I was at a friend’s house, and we found a random online animal quiz. For fun, we took it to find out who knows more about animals.

As soon as the first question, all my friends look at me. The question was, “What is a group of pandas called?”

Stick with us, as we are going to learn more about panda groups and other interesting terminology.

Why is a Group of Pandas Called an Embarrassment?

Interestingly, the name embarrassment has no specific origin. Although used to refer to a group of pandas, it is not used frequently in scientific studies. Some suggestions provide that the term “embarrassment” started in online forums.

Most studies and researches about pandas refer to them as a bunch or pack of pandas.

The term “embarrassment” is one of the popular collective nouns found online. Like pandas, other animals have their humorous collective name without any scientific backing.

There are theories why people started referring to a group of pandas as “embarrassment.” First, giant pandas are lazy and clumsy animals.

With the following, their ineffectiveness and clumsiness make pandas an “embarrassment.” In addition, these spotted bears heavily rely on humans to survive.

Related: What is a Group of Lions Called?

Now that we have learned what a group of pandas is called, let’s see how we name male, female, and baby pandas.

What is a Female Panda Called?

Female pandas are called sows, similar to female swine. However, identical to their collective noun “embarrassment,” the term “sow” has no scientific origin.

The term “sow” is popular online to refer to a female panda. Although studies refer to giant pandas as is regardless of their sexual orientation.

The human interventions attribute to the increase of twins in captivity. Scientists use artificial insemination to increase the chances of panda births.

Scientists and zookeepers implemented ways to ensure the life of the two cubs. They rotate each twin, with one twin spending a few hours with their mother, then get replaced after being nursed.

Zookeepers must do it discreetly for female pandas not to notice.

What is a Male Panda Called?

Male pandas have the same name as a male swine – boar.

The word “boar” is not commonly used in studies to refer to male pandas. Boar is frequently cited on online forums and in non-scientific discussions.

When reading a journal, readers may notice that male pandas are referred to as male pandas or giant pandas.

When a baby panda is born, it is hard for zookeepers and scientists to determine its gender.

It will take a few months before its genitalia appears. To determine the sex of baby pandas, scientists conduct a DNA test.

Giant pandas are known to be lazy in mating. However, some studies suggest that this behavior is because of an absence of competition.

However, in an enclosure, the male panda has no way to prove that he deserves to mate with the female panda.

What is a Baby Panda Called?

Similar to other baby mammals, baby pandas are called cubs. Unlike the names boar and sow used to call for adult pandas, the term cubs are scientifically used to refer to baby pandas.

These baby cubs only weigh 3.5 ounces upon birth. They are so small that their mother can accidentally crush them.

Besides being tiny, panda cubs are furless and blind. These baby yin-yang bears rely on their mother for protection and nutrients.

Baby pandas are also weak, and they cannot move their limbs until they turn three months old. Being vulnerable beings, panda cubs stay for years with their mothers.

It takes them at least three years before these black-and-white babies get separated from their mothers. These three years are crucial as female pandas can only get pregnant once a year.

There are jokes online that all baby pandas are born female. These jokes originated because it is hard to identify the baby pandas’ gender upon birth.

Do Pandas Live in Groups?

No, giant pandas usually do not live in groups, as they are naturally solitary that prefer being alone. Like other solitary animals, giant pandas have their defined territory, and they mostly keep to themselves.

Though it may sound sad that giant pandas spend time alone, these cuddly bears actually enjoy it. They appreciate their alone time so much that they will hide if another panda comes along.

These panda bears have a great sense of smell that they can smell the scent of another panda. They usually hide on top of trees or shallow trees.

However, if, by chance, two pandas meet, they will act hostile. They will make noises and bite each other.

Although they avoid meeting with other pandas, mating time is the exception. The male pandas will spot the scent of female pandas.

Similar Article: What is a Group of Ravens Called?

In Summary – What is a Group of Pandas Called?

And there you have it – a group of pandas is called an embarrassment—definitely one of the most creative collective nouns for a group of animals.

Interestingly though, we assume that giant pandas are social animals. They are usually referred to in a pack or a bunch. When visiting a zoo, you see how pandas seem to get along with each other.

So, it is a twist to learn that giant pandas are actually solitary animals. Who would have thought that these black-and-white bears hate being around someone who looks like them?

Thank you for reading. If you liked this article, here’s another popular panda topic: Types of Pandas.