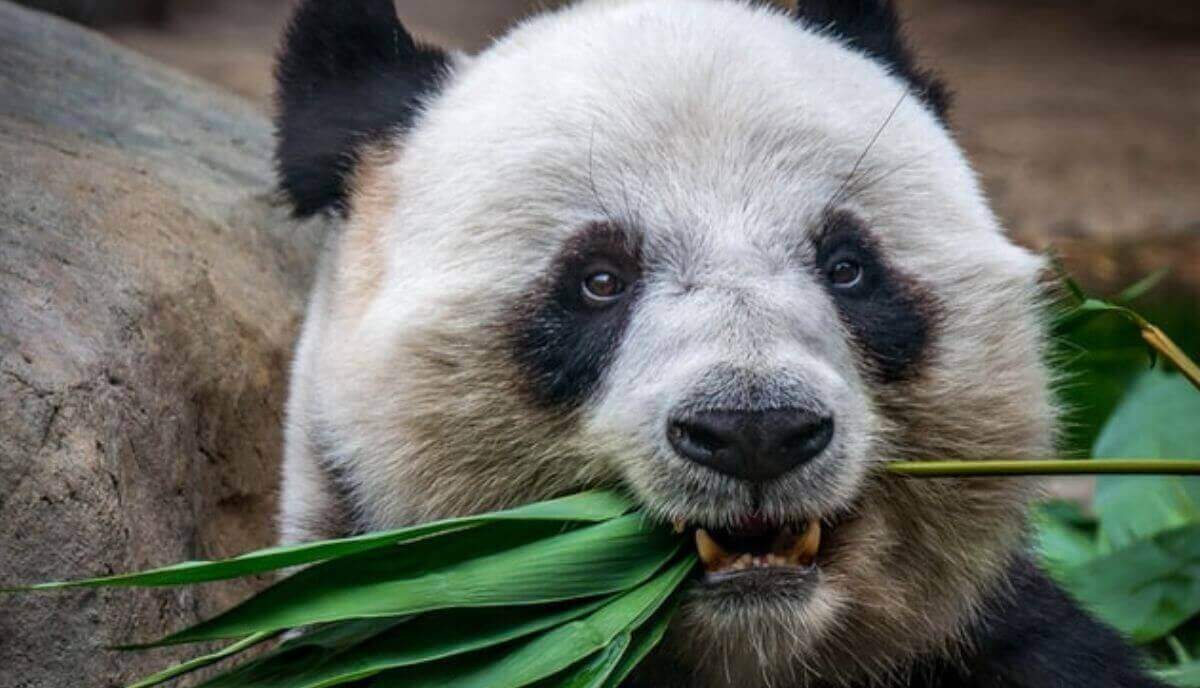 The panda bears are animals native to South Central China and are often described as cute and unbelievably lazy. Pandas spend most of their days resting around eating bamboo leaves and shoots.

With that, you may think that pandas are herbivores, but in fact, they have a digestive system of a carnivore. And with that information, you may question if pandas are dangerous to humans?

Even though they look harmless, pandas can be dangerous to humans. Pandas have powerful jaws and claws, and they are much stronger than most men. Although pandas rarely attack humans, when incidents occur, they are usually severe. The best way to stay away from danger is to keep yourself at a safe distance and not make wild pandas feel threatened.

Pandas are dangerous to humans, and if they wanted, they could severely hurt you. Pandas eat a lot of bamboo, and they don’t eat only leaves. They do eat a lot of shoots, which need a lot of effort and strength to chew.

However, despite feeding on plants 99% of the time, pandas can also eat meat.

And so, in order to be able to eat meat, pandas have strong and sharp teeth, pointier than animals that only eat plants. Strong teeth mean that if a panda bites you, it will hurt you a lot. Their grip is also powerful, and you wouldn’t want to find yourself in a clash with a giant panda.

The teeth are not the only thing that’s strong when it comes to pandas; an adult panda is strong itself. They usually weigh up to 280 lbs, while an adult female can weigh 231.

It’s evident that a grown-up panda weighs more than a regular grown-up human, which is another witness to their strength.

So, if you ever see a panda in the wild, even if they look adorable and super lazy, don’t get close to them. Up close, they are not so cute and can hurt you badly.

Baby pandas are not dangerous as adult pandas are. When the cubs are just born and are tiny, they don’t represent a significant threat. But as pandas get older and bigger, they can become a bit dangerous.

It would be best if you never forgot that pandas are wild animals. No matter how charming they look, even when they are babies and look miniature, they should always be perceived as wild animals.

Viewing a wild animal as it is, you will protect yourself and those around you.

There are slight chances that you will ever see a baby panda in the wild, but nevertheless, you should stay away from it if you do. And if it happens, chances are the baby panda will be with its mother, and the mother can be very dangerous.

Why Are Pandas Dangerous?

There are many reasons why pandas are considered dangerous, and here are four of them.

1. The great panda is a type of bear species. Pandas, just like any other bears, are wild animals that have wild instincts. The main and the strongest instinct every wild animal has is the one to survive. If a panda bear feels threatened, its first reaction will be to defend itself. Even if it doesn’t feel threatened, it can bite you because, like any other bear, it can be unpredictable.

2. They possess characteristics of carnivorous animals. And by that, I mean that pandas can eat meat if they are in the wild and don’t have anything else to eat. Most of the time and most of their lives, pandas eat leaves and shoots from bamboo plants. You’ve already seen many adorable videos circling the internet where clumsy pandas eat bamboo. In reality, pandas are clumsy, but not as clumsy as we think. When they want, they can be agile and use their strength against you. And you don’t want to experience how strong an adult male panda that weighs 280 lbs can be.

3. Pandas have a powerful bite force. Adult giant pandas can generate the power of 2603 newtons with their canine teeth. This force is so powerful that it can rip apart a piece of meat like a tangerine peel. On the other hand, we humans can tear into a slice of meat with a force of around 890 newtons. Besides that, pandas’ back teeth are almost seven times the size of a human’s teeth.

4. They have sharp claws. Pandas have “six” fingers on their broad paws that they primarily use as a grip for climbing and holding bamboo. Their paws are equipped with retractable claws that are sharp enough to pierce into the skin with ease. Do you think that pandas would not utilize these physical abilities as weapons if needed? If you think so, you are wrong.

In three years, there have been three separate panda attacks on humans at the ZOO in Beijing. One time a man jumped on purpose into the enclosure to show off, and two other times two men fell inside accidentally. (source)

I’ve already mentioned that pandas have a strong bite, but I should also mention that it’s one of the strongest among carnivores. So, it’s not strange that the victims of panda attacks have had their limbs almost bitten off.

What’s similar with all of these three cases is that the men were severely injured. In two cases, the pandas bit off parts of their legs, and in one case, almost the whole elbow was bitten off by a panda. The doctors had to work very hard to save the limbs of these three men.

All in all, pandas are considered animals with tremendous and gentle temper, and they are rarely aggressive. They do look cute, clumsy, and adorable, but they are still wild animals. Even if the attacks on humans are rare, it doesn’t mean that they don’t happen.

So, if you ever have a chance to see the giant panda at a ZOO, please don’t go inside its enclosure because there is a chance that it will attack you because it feels irritated and even scared.

When it comes to the cuddles with pandas, leave it to the other people, the professionals that work with them for their whole life. People that are not trained to handle these wild animals should come close to them.

FAQ – How Dangerous Are Pandas?

As we have already seen, despite their peaceful and non-aggressive personalities, pandas can indeed be dangerous. Here are some of the most common questions related to the potential panda danger.

Pandas usually do not bite, as they rarely display aggressive behavior. However, in case they are confronted, pandas will use their strong jaws to bite the potential opponent. By having the characteristics and digestive system of carnivores, panda bites can cause severe injuries. Do not get deceived by their cuddly appearance. If threatened, pandas will defend themselves by using their teeth and powerful bite force.

Can Pandas Kill You?

Yes, giant pandas can potentially kill any human. By weighing more than double the average person, pandas have all the necessary weapons to take down any man alive. However, pandas do not see humans as a food source, and as I have mentioned, they would rarely attack anyone unless they are not cornered, scared, or if their offspring are in danger.

Can You Pet a Panda?

No, you cannot pet pandas, as they are endangered animals protected and owned by the People’s republic of China. There are only around 2,000 giant pandas left in the world, and because of that, you won’t be able to find many places that allow petting pandas. But even if you do somehow manage to hang out with a panda, you should always be careful and accompanied by animal trainers.

No, pandas are naturally not aggressive animals. However, when threatened, pandas are known to display aggressive and violent behavior by attacking their intruders. In fact, most incidents that led to an attack by an aggressive panda happened after the animal was previously agitated by people. It would be best if you remembered that these cuddly-looking bears have the anatomy of carnivores and predators. So, you don’t want to irritate them and trigger their wild predatory instincts.

Pandas are undoubtedly cute creatures, and 99% of the time, they are non-aggressive. But, you should always keep in mind that they are wild animals with wild instincts, and they can be unpredictable and dangerous.

Just like every other bear species, pandas have physical abilities that are far stronger than any human. So if you happen to see a panda, the best approach is to stay far away and enjoy these fluffy creatures from a distance

And that is it. I hope I have helped you resolve the dilemma of whether pandas are dangerous. If you liked this article, I recommend you to read – Are Hippos Dangerous?