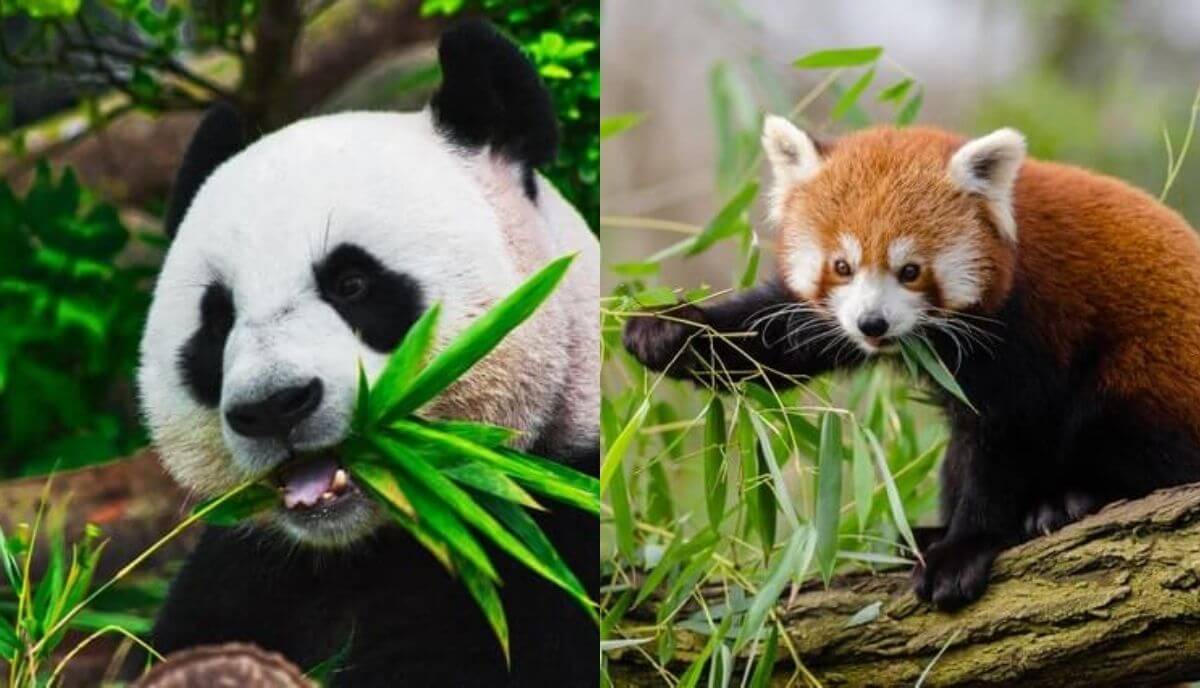 I was watching the Kung-Fu panda last night as a treat for myself. I ended up watching the film because the main character was a panda. However, a particular animal character caught my attention.

So, I searched about it, thinking the animal was kind of a rodent or squirrel. To my surprise, it is also a panda! I realized that there are types of pandas, not only the black and white ones.

So, what are the types of pandas out there?

If you want to learn more about the differences and similarities between these two types of pandas, you are in the right place!

Let us discover what differentiates the giant panda from the red panda. 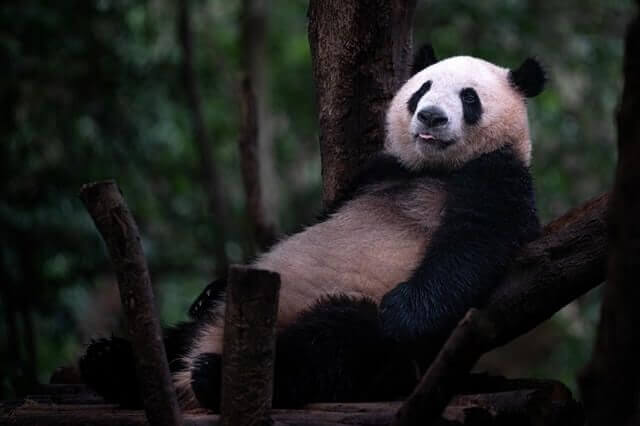 A widely recognized type of panda, the giant panda is China’s pride and joy. They have the iconic black and white color that have been the symbol for endangered animals for years.

But due to continuous human intervention, the giant panda’s population has been increasing throughout the years.

As for their diet, giant pandas have been relying on bamboo. However, these massive creatures are picky eaters. Some giant pandas in the wild had died because of starvation.

They starve because of the limited number of bamboo varieties in their area. Although considered herbivores, giant pandas have a digestive system of a carnivore.

They sometimes eat small rodents like pikas. For years, giant pandas have been difficult to be classified on what animal family.

But with molecular studies, giant pandas are classified as bears, which explains why their digestive system is similar to that of a carnivorous bear.

Though, giant pandas may have evolved, making themselves herbivores. Giant pandas are known for their yin-yang color, but there is a reason behind it. Their fur color helps them adapt to their environment.

Unlike other bears that can shed and change coats each season, giant pandas cannot do that. Their coat is a compromise pattern to fit in during snowy winter and warm summer.

In fact, pandas are very lazy when it comes to reproducing, which leads to lower birth every year. They like being comfortable and barely moving within the day.

To protect their specie, humans have already intervened, ensuring that there will be future pandas. Giant pandas are also clumsy, constantly finding themselves in trouble.

However, some scientists suggest that it may be because of their physical appearances. Giant pandas have round bodies and short limbs, making them easily roll. 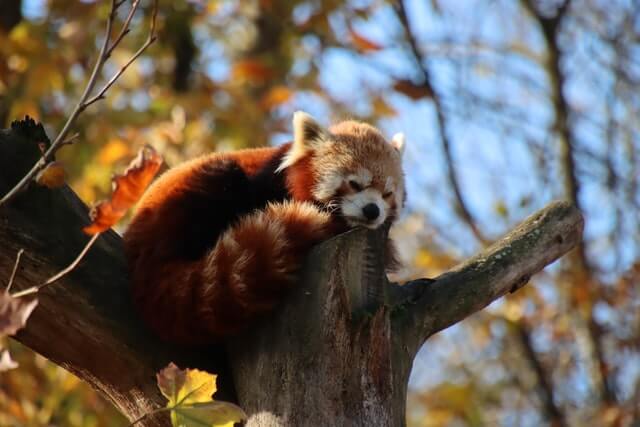 Red pandas have the nickname the “lesser panda.” They received such a name for being the less popular panda. So, it is a surprise for some people to know that these animals are pandas.

Red pandas have these beautiful flaming red fur. The frontal part of their body is covered with a black coat, and they have a long tail like a monkey.

They also have fox-like ears and domesticated cat-like faces. Like giant pandas, red pandas have distinctive features that make them stand out.

However, these characteristics also misled many people into thinking red pandas are felines or large rodents. When in actuality, red pandas have their own taxonomic family, Ailuridae.

Red pandas live in the provinces of the eastern Himalayas and southwestern China. They also enjoy munching on bamboo, but it does not mean they are herbivores.

These animals are carnivores but do not eat meat (wait, what?). The change of diet started two million years ago, and during its evolution, they’ve adapted to eating plants.

Unlike other animals, red pandas are crepuscular, which means that these animals are active during dawn and dusk.

Related: How Dangerous Are Red Pandas?

During mating season in winter, they spend 45 percent of their time awake. Red pandas can grab onto slippery and mossy tree branches with cat-like claws.

They also use their long, bushy tail to keep their balance on top of the trees. It is no surprise that red pandas are great tree navigators.

During their younger years, red pandas are very playful. As they leap from one branch to another, this playtime helps them build balance and coordination.

Another interesting fact about red pandas is they are treated as the “real pandas.” Red pandas were discovered by scientists about 40 years earlier than giant pandas.

Giant pandas actually took the name of the red pandas’, thanks to some of their eating similarities and fur pattern.

Now, let us learn more about the similarities and differences between red and giant pandas.

The first glaring difference between the red panda and the giant panda is their appearance.

Both the pandas also have tails, but the red panda has a long, bushy tail. The giant panda’s tail, on the other hand, is short that its chubby body can hide it.

Another difference between the two is their physical activities. The giant panda is slow, lazy, and clumsy. In contrast, the red panda is an active animal that plays around tree branches.

Although the giant panda can climb, it will prefer to lay down. The red panda will spend more time playing with others.

The main similarity between the giant panda and the red panda is that they are both herbivores, and they mainly rely on bamboo for their daily diet. Both pandas are also originally carnivores, but years of evolution helped them change their diet.

The abundance of bamboo in their area might have influenced the change in their diets.

Another similarity between the giant panda and the red panda is their pseudo thumb. A pseudo thumb is a middle finger that can rotate on a ball-and-socket joint.

When climbing, pandas use this secret thumb in holding onto trees. This thumb is an enlarged wristbone that helps the pandas hold bamboo stems. It also has a fingerprint unique from the others.

Although belonging to different taxonomy classifications, the giant and red panda have the same ancestor.

Lastly, they are kept both in zoos and sanctuaries. Although the red panda is an active animal, it still requires the assistance of humans for the survival of its specie.

FAQs on Two Types of Pandas

Let us answer some frequently asked questions about these pandas!

No, the giant panda and the red panda are not closely related. Though, both panda species come from the same animal ancestor.

Why are Red Pandas called Pandas?

Red pandas are called pandas because they are the first animal to be classified as such.

The red panda is also referred to as the “first pandas,” discovered five decades earlier than the giant panda. Not the other way around.

Why are Pandas called Giant Pandas?

The giant panda was named after the red panda because they both enjoy bamboo and live within the same vicinity.

The giant panda also has some physical features that the red panda has, such as a false thumb and stripe pattern.

Summary of Different Types of Pandas

Panda is not limited only to the giant panda. There is also the red panda, or as they called it, the “first panda.”

Due to its immense popularity, most people thought there was only one type of panda. When the giant panda was hitting a dangerous extinction level, it started getting all the attention.

Although both are named pandas, the giant and red panda are entirely different animals. The giant panda is cousins with bears, while the red panda is more like a distant relative of a ferret.

Thank you for reading. Hopefully, this article on two types of pandas was fun and informative.

For the very end, here’s a recommendation of another popular read: Are Pandas Friendly?