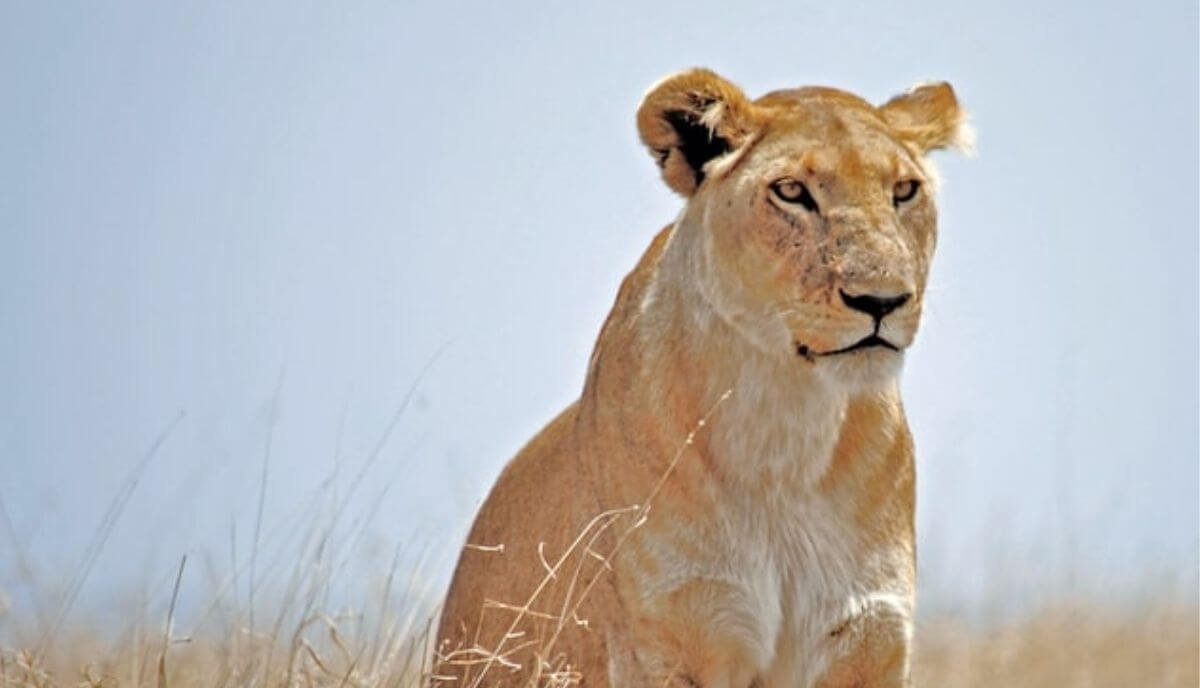 Did you know that a female lion is the dominant one in any group of lions? Yes, despite their thick manes that make them look majestic, and all the depictions of them being the king of the jungle, male lions only come and go, but female lions are there to stay!

There is so much more to learn about female lions; from their leadership nature to guarding their territory, the female beasts need more recognition and appreciation.

What is a Female Lion Called?

A female lion is called a lioness. Lionesses are super females, performing the majority of duties in their pride (group), from catching most of the food to protecting the territory from intruders and raising cubs. These intruders are typically other female lions living nearby, looking to expand their territories.

According to Craig Packer, director of the University of Minnesota’s Lion Research Center and a leading lion researcher, female lions form the core of a lion’s pride and, “the heart and soul of the pride”.

Female lions, or lionesses, grow up in a territory from birth, which is why they try hard to defend the same.

If and when their pride gets too big, these females will start a new territory for their daughters, nearby, so they can create a new pride and build their own territory.

A lion pride typically includes a dozen of female lions and only a few male ones. Also, 99% of all members in a lion pride are related females.

Now that you’ve learned some basic details about female lions – let us explore further and learn more about these majestic animals. 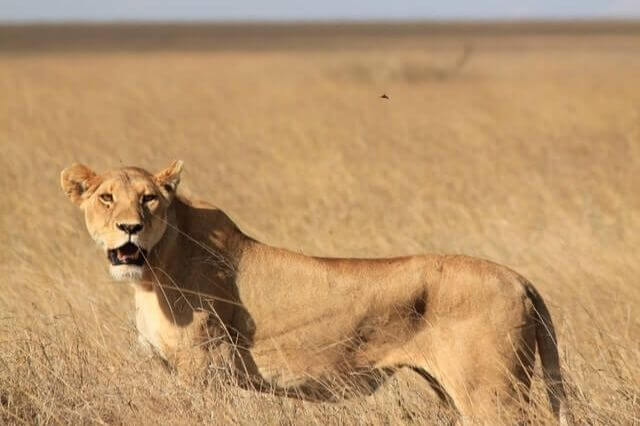 The lioness is usually smaller in terms of size and weight when compared to the male. Regardless, females excel in hunting, which is one of their main tasks, and they’ll go after any animal they come across.

Female lions typically hunt animals that are small to medium in size, including warthogs, birds zebras, antelopes, wildebeests, and others.

Lions, in general, have amazingly muscular, broad-chested bodies. Their heads are short and round-shaped, and so are their ears. They have long tails with hairy tufts at the end, and they look entirely different from other wild cats, such as jaguars and tigers.

Of course, female lions look different from male lions, and the most obvious feature that makes them stand apart is the lack of thick mane around their neck.

Their coat is short, the color of which can differ from one lioness to another, ranging from brownish orange to buff-yellow to dark brown. This unique coloration of female lions acts as a great camouflage in the wild when they are hunting their prey.

Interestingly, the hairy tuft at the end of their tail tends to be darker in color than the rest of the lioness’ coats. 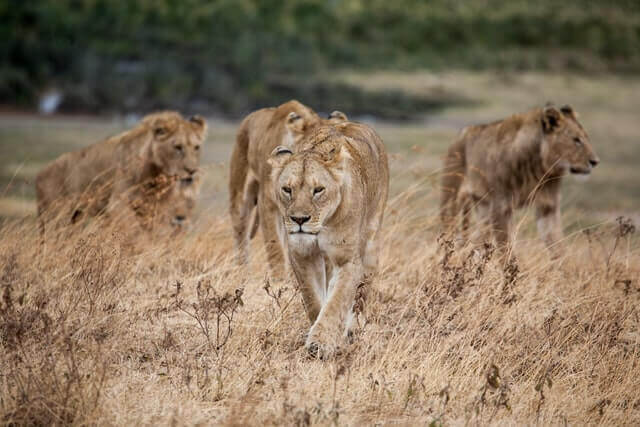 Of all the big cats in the wild, lions happen to be the most social. A group of lions is called a “pride”, which mostly comprises of related females. Any single lion pride can consist of as many as 40 members, including many adult lionesses, up to four males, and cubs.

Depending on the location and availability of food in that area, the size of a pride can vary.

The lion prides engage in activities together, including grooming, hunting, and also taking care of the cubs. The role of females in a pride is primarily to hunt and take care of the cubs, and when the females are out hunting, male lions will guard the cubs.

Sometimes, when the lionesses go hunting, they leave behind the cubs to be babysat by other female lions in the pride, and this is referred to as a crèche.

Young female lions remain in their mothers’ pride unless and until there is a scarcity of food and they have no other option but to move out.

Young males, on the other hand, will be driven out of the pride at about the age of 3, when they have grown enough to live on their own and can soon take over a pride of their own.

According to the International Union for the Conservation of Nature (IUCN), lions are on their Red List and are categorized as Vulnerable, meaning their population is decreasing, and there is a continuing decline of mature individuals. The reason for this is that lions face various threats.

Conflicts with humans, loss of habitat, and illegal wildlife trade happen to be the largest dangers to lionesses.

Furthermore, human expansion also has led to human-lion conflict, since their natural prey significantly reduces in number, lionesses go on to hunt human livestock, which makes humans retaliate by killing them.

Not to forget, the illegal trade of animals is another major threat to lionesses, as their bones are known to be used in traditional medicines.

Here are some interesting facts on female lions:

In this section were are going to look at some of the most common questions about female lions.

Do Female Lions Have Manes?

Female lions don’t usually have manes. While manes have long been known as a distinguishable characteristic in male lions, in a rare occurrence, a few female lions have been found to grow manes and display some masculine behaviors as well.

A study published in the African Journal of Ecology reported that this growth of manes in lionesses is likely the result of high levels of testosterone. Testosterone is the same hormone that causes male lions to develop their mane when they are about 1-year-old, which is when their body starts producing the hormone.

So, while it has been found that some lionesses grow manes, it is most certainly a rare occurrence.

Why Do Female Lions Hunt Instead of Males?

Female lions do not hunt instead of males; they are rather the ‘primary’ hunters. Male lions also get involved in hunting when the prey is big, like an adult giraffe, adult buffalo, etc. These animals could be too big for lionesses to attack on their own, and the size, weight, and aggressiveness of a male lion can be a game-changer.

Yet, female lions are better for hunting for various reasons. They are faster and more agile than male lions due to their slender and light bodies.

Lionesses also possess more stamina, which males lack. And lastly, while a female lion can effortlessly blend in while hunting, male lions cannot do the same due to their big, dark manes.

Difference Between Male and Female Lions

Female and male lions have several differences between them:

You May Also Like: What is a Female Tiger Called?