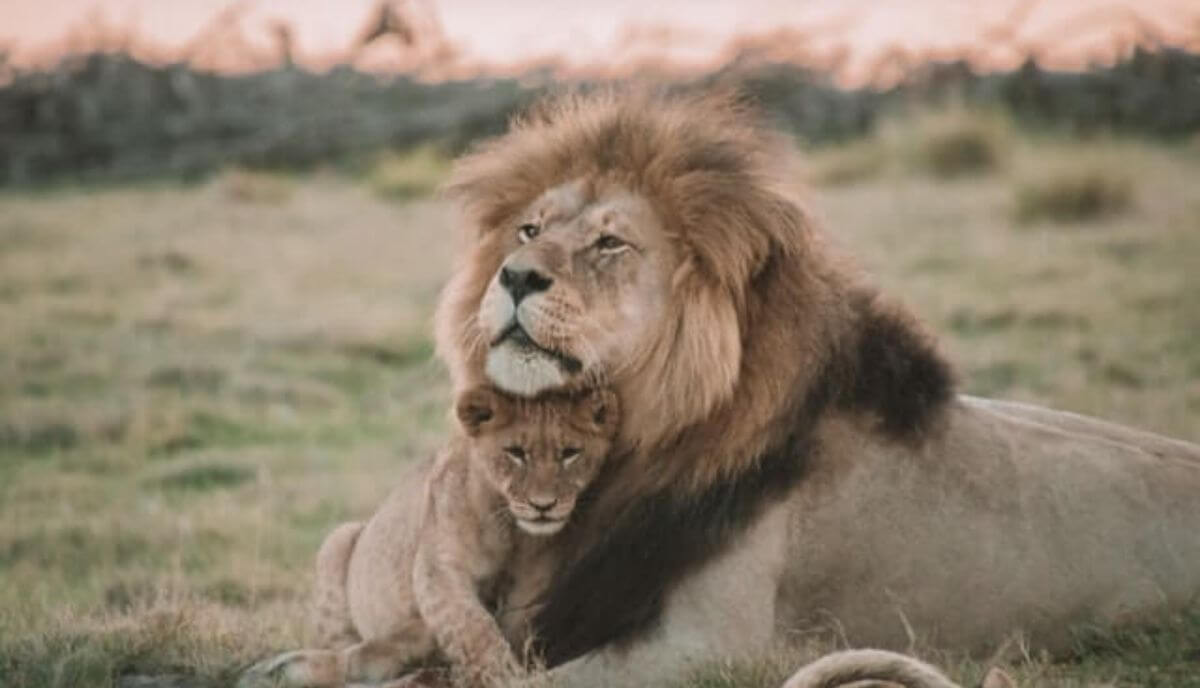 Having a pet lion can seem like a cool and fun idea. Seeing videos and photos online of people with their pet lions can also be enticing. The concept of owning an exotic animal as a pet has gathered momentum thanks to the wealthy and famous.

Although it could be an interesting experience to have a lion, there are a lot of factors to consider beforehand.

Can You Have a Lion as a Pet?

Yes, it is possible to have a lion as a pet, but there are several aspects you must carefully consider before deciding to purchase one. The primary factor is whether it is legal to own a lion as a pet in your country or state. You will need to apply for the exotic animal license, and you should also consider the high expenses that come with having a pet lion.

Keeping a lion as a pet is a much greater responsibility than keeping a cat or a dog. In order to have a pet lion, safety needs to be your top priority.

Big cats, and especially lions, are aggressive by nature. They are often the apex predators in their habitats. Being top predators means that they face very few threats, and this makes them fearless. Therefore if they feel threatened, they are likely to attack.

Additionally, being ‘wild’ means that their behavior in a domesticated setting could be unpredictable. This applies at all times, whether your lion is trained or not.

Wild animals in captivity have often displayed what seems like erratic behavior. However, if the animal is in its natural habitat, such behavior would be considered normal.

Therefore although owning a lion as a pet is possible, having such a beast on your property will directly affect the wellbeing of the community around you. The lion will also equally be affected by being kept in captivity in an environment that is not its natural environment.

No, lions do not make pets as they are wild animals that belong to the wilderness and not to captivity. Apart from that, lions are dangerous, and despite being raised under domestic conditions, they will always possess their wild and predatory instincts.

Also, it is cruel to the animal itself to take it away from its natural habitat. The lion is an animal that needs a lot of space for running and hunting, it lives and operates in a family group. Life in captivity limits their natural behavior, which can negatively affect both the mental and physical state of the animal.

Apart from the expenses and cruelty that come with keeping a pet lion, you should always keep in mind that lions are wild animals, and their behavior can be quite unpredictable. Therefore they pose a danger to you and the community around you.

Lions are not particularly good pets. The idea of owning an exotic pet is cool. However, before you get carried away, let us look at some practical factors of keeping a lion as a pet.

Related: What Are the Adaptations of a Lion?

4 Reasons Why You Should Not Have a Pet Lion

Firstly, assuming that you live in a place where owning a lion is legal, you will need to obtain the necessary permits and liability insurance. It usually takes a long time to obtain both because the risk is very high.

Additionally, you cannot get the permits without insurance. The potential liability of owning a wild animal is not the same as that of owning a domestic cat.

The cost of constructing an appropriate enclosure for your lion is high. You will first need to have a large property with secured fences around it. Also, you have to construct a proper enclosure within the land that is detached from the perimeter.

Finally, training a pet lion can take up to three hours a day or more, depending on the age of the lion.

In captivity, lions may require less food than in the wild, as they are fed daily. This amounts to about 8 lbs (3,6 kg) for the males and 6 lbs (2,7 kg) for the females.

Your pet lion is likely to eat beef. Depending on your source, the cost of beef is about $3 to $4 a pound.

These figures do not include additional vitamin and mineral supplements your lion will require since it lives in captivity.

You may assume that if your lion is healthy, you may not have major healthcare costs. Well, unfortunately, this is not true.

There are some diseases that felines are susceptible to, such as rabies and distemper. You have to vaccinate for these annually. Your lion will also require deworming each month.

For a sick lion, you will need a vet. The vet can attend to the lion on your premises or at their practice. Finding a vet willing to work with privately owned wild cats can be a challenge.

A willing vet may charge you an exorbitant fee because their license could be revoked if they are not licensed to work with wild animals. They also risk being harmed by your lion during treatment.

Last but not least, the safety of the people and animals in the community around you cannot be guaranteed. A lion is a wild animal and poses a permanent threat as long as it is alive.

You cannot control its nature even if you are able to meet the requirements in terms of insurance, nutrition, health, and shelter. Although a properly trained lion will do well in its enclosure most of the time, there is no telling when a lion’s behavior could be risky.

Considering that lions are territorial animals, likewise, humans, coming into their close proximity could cause lions to feel threatened. A threatened lion will act in self-defense, and a lion defending itself or its territory can seriously injure or kill.

Can Lions Be Domesticated?

To fully and truly domesticate a species would require a modification of its DNA through a process of selective breeding. This process would also modify its behavior over time. It could take several generations for domestication to take. A domesticated animal lives near and regularly interact with humans.

For a lion, this means that humans have full control of its behavior. It means that the lion will act as peaceably and amicably as a dog, a cow, pig, duck, or rabbit would with humans. It also means that in living together, the well-being of both humans and the lion are not compromised in any way.

The reason that a lion cannot be domesticated is that its instinct cannot be modified easily. Even if the lion may be used to trust its trainer or owner, it may also attack if feeling threatened. The docile behavior displayed toward its owner may not apply to all persons.

In the past, taming lions involved extreme techniques such as starvation, abuse, or fear. Today’s lion tamers will largely use repetition, encouragement, and trust to train lions and other big cats. Lion taming, however, does not rule out instances of unpredictability when it falls back to its natural instinct.

In this section, we’ll answer some of the most frequently asked questions on pet lions:

Yes, pet lions can be very dangerous. They are adorable when they are cubs and may be easy to manage due to their size. But within a year or two, they grow to their full size, and with increased size comes increased strength. This is where the danger lies.

Lions naturally display destructive behavior from their aggression to urine marking. An adult lion is a hunting species by nature. Eventually, being caged will cause them to become restless.

With a sufficient supply of food and nutrition, a lion may not need to hunt. If the nutritional needs are not met, the lion will seek other avenues.

Do Pet Lions Attack Their Owners?

Yes, if a lion feels threatened, it will attack, and the owner of the lion would not be exempt from such aggression. The word ‘pet’ should not fool you. A lion will always be a wild animal, even if it has been raised as a pet from birth. Its behavior should not be underestimated or assumed to be docile like the domesticated house cat variety.

Lions by nature live in communities and this is where they thrive best as species. As a pet, a lion may have food and safety, but the isolation may cause it to have what is called chronic captivity stress. This may lead to anomalies in their general health.

The price of a lion can vary depending on the breed’s rarity. It starts from $5,000, and it goes all the way up to $140,000. Housing will require a strong cage or enclosure that would additionally cost $10,000.

Food and nutrition would cost about $10,000 annually. A healthy lion requires annual shots, which will cost about $2,620 annually.

Is it Legal to Own a Lion?

No. In general, it is not legal to own a lion. In most countries, there are strict laws governing the keeping of wildlife. Entities such as zoos and wildlife rehabilitation centers are legally licensed to care for lions. They are required to meet certain safety precautions and standards for the care of lions.

Some countries allow for the owning of wild animals as pets. However, as mentioned, the private ownership of lions is costly.

Proper upkeep and safety precautions have to be taken when keeping a lion as a pet. This is to ensure that your safety, the safety of people around you, as well as other animals in the area is not compromised.

Owning a lion as a pet may seem like an exciting venture. However, it is costly to get the necessary licensing in order to keep one in a domestic setting. Additionally, the costs of having and maintaining a pet lion are extremely high. A lion living in a domestic environment could compromise the health and safety of humans and other animals in the vicinity.

That being said, some parts of the world allow for the private ownership of lions as pets. This, however, does not change the fact that a lion is still a wild animal, and as such, can be very unpredictable and dangerous. Lions belong to the wilderness among other animals and their own species.

Thank you for reading. I hope you have learned something new about these majestic big cats.

If you liked this post, here’s are a recommendation of a similar article: Are Lions Loyal?