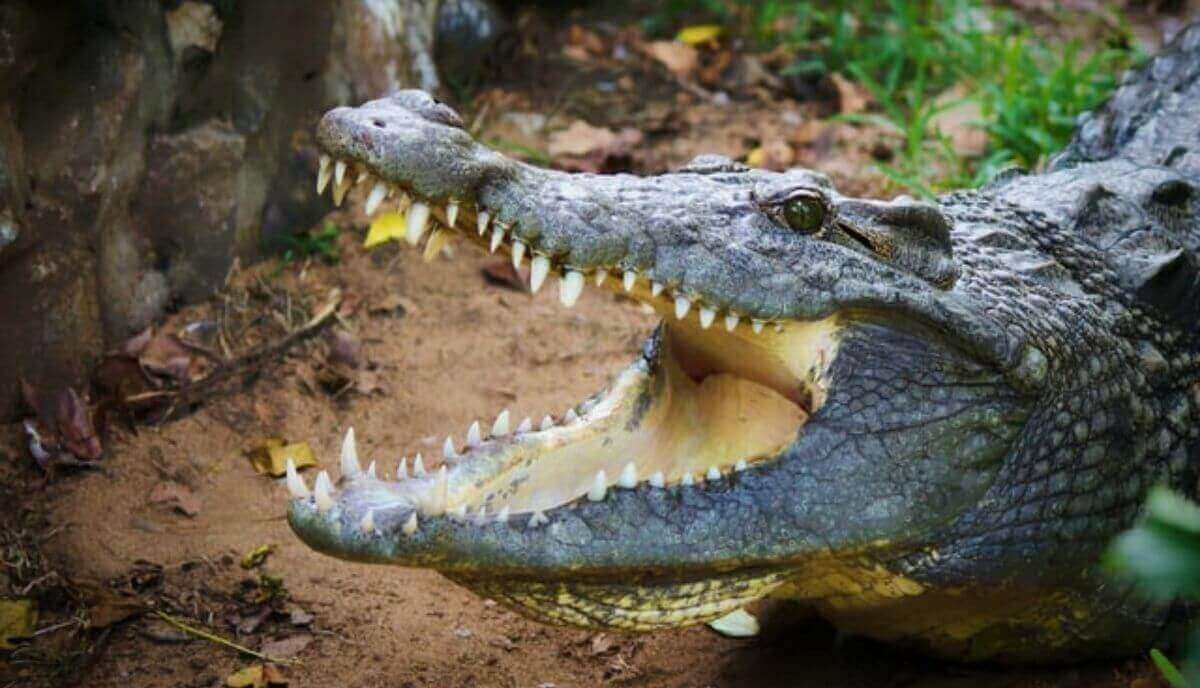 Crocodiles are some of the scariest animals that live in water. It is recorded that they are 100 times more dangerous than sharks, so there is a genuine reason to be afraid of them. If you have wondered if crocodiles eat humans, you’re in the right place.

So, do crocodiles eat humans?

Yes, given the opportunity, crocodiles will try to attack and eat humans. Saltwater crocodiles and Nile crocodiles are in particular dangerous as these reptiles are most likely to prey on people. A crocodile’s bite is three times more powerful than that of a lion, which explains how dangerous and deadly these animals are.

Why Do Crocodiles Attack Humans?

Crocodiles attack humans since it is in their nature to do so. Although not all species are dangerous to humans, it is primarily the Nile and saltwater crocodiles. They are usually larger than most other species, which are less likely to attack a human being.

While people are at the top of their food chain on land, they are not when near the croc habitat. Crocodiles eat humans as a source of food which is why people are a frequent target.

These animals usually attack people both on water and land. Depending on the crocodile’s size, they can bite off a limb, but the larger ones will try to swallow the person whole. While they may be large, crocs are very fast over short distances on land and water. They are, however, faster in water where they usually can outswim a person. They use this to their advantage to viciously attack a human being, slowing them down.

Crocodiles attack humans by ambushing them, ensuring that they are successful in their hunt. They move quietly in water and only pounce on their prey when they are sure they can get the kill. This makes them a top predator in their environment.

Related: What Eats A Crocodile?

Why Are Crocodiles So Aggressive?

There is no accurate explanation why crocodiles are so aggressive and short-tempered apart from their nature. These reptiles are the number one predator in their habitat, and they are one of the most aggressive animals on the planet.

According to studies, the saltwater crocodile got proclaimed the most aggressive animal among seven other reptiles. It is in their nature to be aggressive even shortly after hatching.

However, in the adult age, aggressiveness helps them stay alive, and protect their territory. Their aggressive attacks also help them ensure that they injure the prey enough to make them immobile to feed on them.

Compared to their cousins, the alligators, crocodiles are more aggressive, which is why some people keep alligators as pets but not crocodiles.

These two animals belong in the same order but different families, which explains the difference. They also live in different environments since the crocs may live in either saltwater or freshwater while their counterparts prefer saltwater.

However, this does not mean that alligators are not dangerous; they too attack humans and other animals.

Crocodiles have been at the center of horrible attacks on human beings by killing hundreds of people. The following are some of the worst attacks by crocs.

Ricky Ganya was the victim of one of the worst attacks by a crocodile in 2020. He was collecting snails at a riverbank in Malaysia when he was attacked by a crocodile and eaten whole. The aunt who was nearby witnessed the whole thing and called for help from emergency services. They baited the 14-foot reptile using a chicken, and they caught it three miles from the incident scene. The croc was then slaughtered, where they recovered remains believed to be of the teenager.

A female ranger was fishing together with her family when they couldn’t find her anymore. She had been collecting mussels nearby when they heard some splashing noise and noticed she was up to her waist in water. After a little, while they couldn’t see her, and the bucket she was using was found a short distance away, and she was believed to have been attacked by a saltwater crocodile. They kill at least two people every year in Australia.

A 16-foot crocodile about 75 years old is known to be behind over 80 killings in Uganda. It was named Osama after the 9/11 attacks since it attacked numerous people between 1991 and 2005. The croc lived in Lake Victoria, where it would pounce on kids swimming. Due to its large size, it swam under fishing boats to capsize them and attack the fishermen. According to villagers, they could not capture it since it changed habitats often and would mostly go to the lake to attack unsuspecting humans.

Fatimah, 45 years old at the time of her attack, was fishing in an Indonesian river when a 19-foot crocodile ambushed her. Friends nearby heard her screams at the beginning of the episode and had to watch as the giant croc ate her whole. The locals managed to trap and kill the reptile by cutting it open, where they found the remains of Fatimah.

How to Survive a Crocodile Attack?

If you are swimming or fishing in a lake or river with crocodiles, it is easy for them to attack you. However scary it may be, don’t give up the minute you see the reptile. Even when ambushed, you can fight your way out and survive following the following tips.

A crocodile’s mouth is the most dangerous part of its body other than its weight. But, you can wrestle your way to its snout and close it. Note that this is not an easy task since it will take all of your might, but it will save your life. If you can find some rope or vines, you can roll them on the snout to buy you some time to run away or get help.

Run in a Straight Line

The myth that you should run in zigzag is just a myth so running in a straight line is your best bet at outrunning a crocodile since it allows you to be faster. A crocodile can run up to 12 to 14 kph for a short distance, so you should aim at beating this.

Crocodiles have excellent eyesight, especially in water. If you cannot shut its snout, then your best alternative is to poke its eyes which will give you enough time to run. Use either a sharp rock or stick to gouge the eyes, and this should render the crocodile helpless for a few minutes.

In Conclusion – Do Crocodiles Eat Humans?

Crocodiles are one of the most dangerous and deadly animals on the planet. These reptiles are known to attack and prey on human beings, and it is estimated that they are responsible for at least 1,000 kills each year. The best thing to do in order to prevent a croc attack is to avoid the areas where they live.

However, if faced with one, it is essential to know how to behave. While they can be quite aggressive in their attack, it is still possible to survive it with the right mindset. Think and act fast when attacked, ensuring that you cause the most harm to the reptile.

Thank you for reading. I hope I have helped you gain some new knowledge by answering the question “do crocodiles eat humans?”

If you liked this crocodile topic, I would recommend you a similar read: Can Crocodiles Be Tamed?