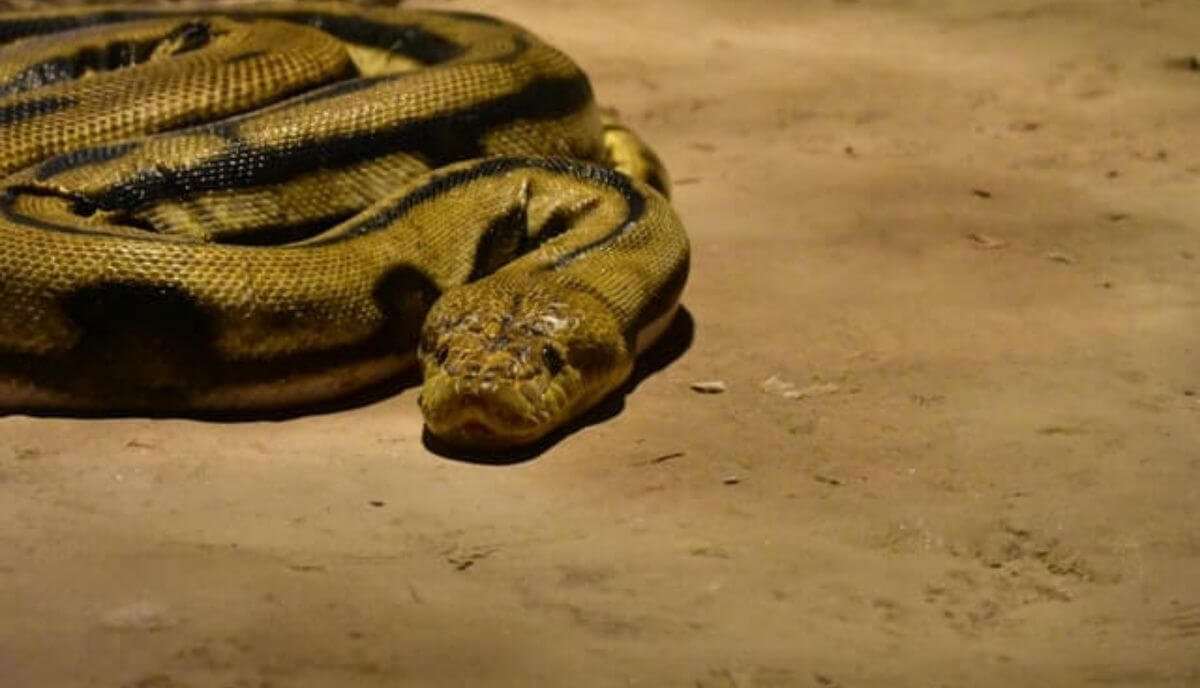 But is it all due to a bad rep, or do they really pose a threat to humans? Do anacondas eat people?

While anacondas are capable of eating a person, there is little to no evidence of such reports. Humans are not the primary food source for these giant snakes, even though they would have no problem swallowing a person since they are known to kill and feed on large prey, such as deer, caimans, and jaguars.

But how dangerous are anacondas actually, and should you be afraid of them? Let’s find out!

Even though they do not actively hunt humans, anacondas are one of the most dangerous predators. The green anaconda, in particular, is deadly since it is the world’s largest and also one of the most robust snakes. If you happen to stumble upon a yellow, green, or any well-grown adult anaconda, you should be extremely careful.

Interestingly, female anacondas are, on average, almost two times bigger than males. Females are also considered to be more aggressive than male ones.

However, both genders are territorial and solitary, which means if any prey steps into their territory, they could get very aggressive. And according to animal experts, when another predator jeopardizes their habitat or home territory, these giants would not hesitate to attack.

There are a few theories on why anacondas do not usually attack people. The most obvious one is that people are not their primary source of diet.

Several other pieces of research conducted on the behavioral patterns exhibited by anacondas also suggest that these snakes show only defensive aggression and not active aggression towards humans.

But either way, anacondas are some of the deadliest predators that ever lived in a South American food chain.

The heavier weight does make them slow-movers on the land, but that is not a concern for these species as their hunting ground is the murky waters.

The added weight, stout body, and strong neck muscles allow them to swim faster and effortlessly compared to other smaller anacondas.

No animal that shares the habitat with these powerful reptiles is safe! Besides, green anacondas do not have any natural predators due to their size and strength.

How Do Anacondas Kill?

Anacondas are excellent swimmers, so they use water as their hunting ground for catching their prey. They are active predators during the night and early evening hours.

These reptiles roam around murky river banks and use their camouflaged skin to stay hidden and unaware. They hide and attack the moment their prey arrives.

Anacondas are nonvenomous constrictors, so they capture their prey and use their strong muscles and body to constrict the blood flow to the brain, resulting in the prey’s death. Sometimes, drowning is another way of killing the victim.

By being carnivores, anacondas feed on various live animals, such as deer, caimans, tigers, monkeys, birds, etc. The jaws’ flexible muscles and connective tissues allow them to swallow larger prey.

Interestingly, anacondas have a robust digestive system, and they usually eat only 4 to 5 times per year, as they need up to 4 months to digest their meal. (source)

How to Survive an Anaconda Attack?

Anacondas are large, strong, and deadly snakes of the world. You need to have some basic survival techniques to manage, survive, or protect from imminent death if you come across one.

Here are some valuable tips you could follow to survive an anaconda attack:

• Do not run because anacondas are much faster than humans.

• Lay flat on the ground with your chin tucked in.

• Make sure to carry a knife or any other sharp object if you go into anaconda territory.

• Anaconda would come and nudge you around and tease you for a while. Be sure to stay still.

• The snake would start swallowing you from your feet.

• Stay still and wait till it reaches your knees.

• Once there, gently take out your knife, and start sliding it in the upper section of its mouth, tearing and ripping.

Do Anacondas Have Teeth?

This particular structure of their teeth is similar to what we could see in most snakes, especially those belonging to the boas family.

However, anacondas barely use their teeth for hunting since they have strong neck muscles and jaws, which do most of the constrictive killing duties. The primary use of their teeth is to lock the prey in their jaws.

Larger species of anacondas seem to have a sharper and more pronounced teeth structure corresponding to their physical development and growth rate.

Yes, anacondas sometimes bite their prey using their short series of teeth. They bite the target to get a stronghold of them and then either drown them or constrict them using their jaws, but the bite itself is not venomous. The strength of their anacondas’ bite varies with their age, weight, length, and sex.

Their teeth, however, are not used for chewing. Instead, the teeth of the anacondas are curved with the main purpose of supporting quick swallowing.

Females tend to possess greater bite strength, as they are larger and sturdier than males.

Also, the growth rate of females means they have more prominent teeth than males, giving them a more substantial bite force.

The four rows of teeth also increase the bite strength because it adds up to more teeth, resulting in more power.

In Summary – Do Anacondas Eat People?

Anacondas do not usually eat people, as we are not their primary source of nutrition. There are only a few reported cases of man-eating anacondas, which mostly remained unverified. Nonetheless, anacondas are some of the most deadly snakes on the planet, and they can be extremely dangerous.

With this, we have concluded the “do anacondas eat people?” article. Thank you for reading!

Hopefully, this post was informative and fun to read. For the very end, here’s a recommendation of another similar article: Do Bears Eat People?