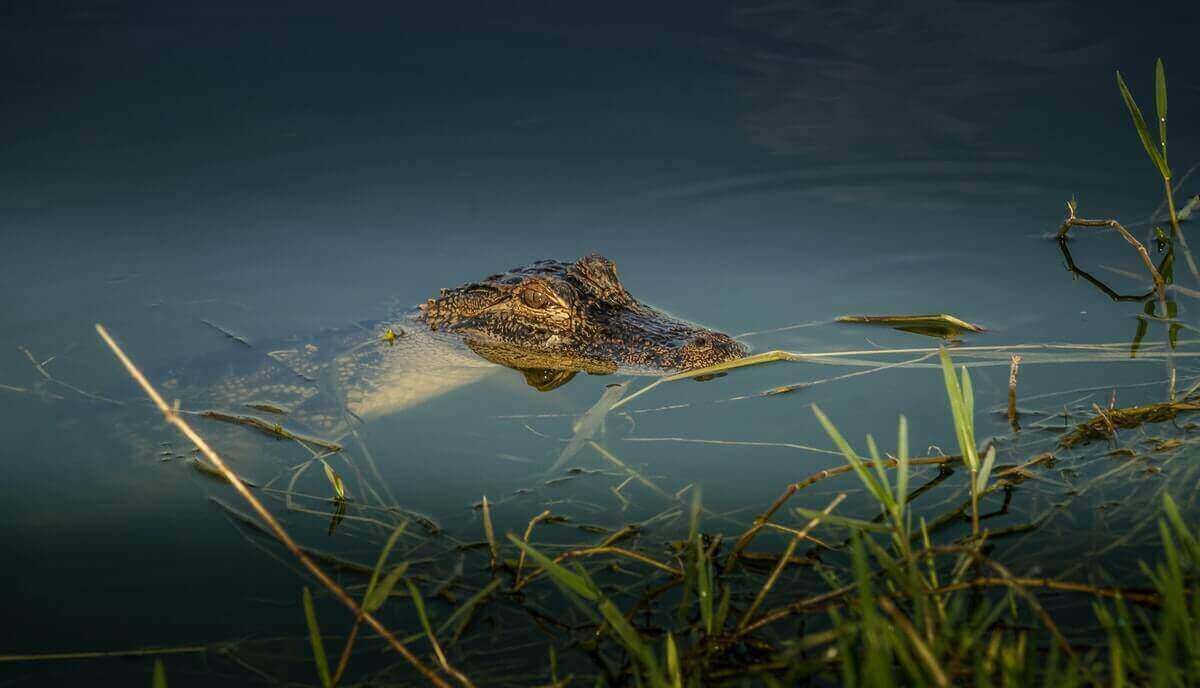 Here, we are going to tell you what animals would hunt and eat a crocodile; list them out, and discuss further in detail.

When we speak about the food chain, crocodiles are at the very top. In fact, they are apex predators. To put it simply, crocodiles prey on many animals but are seldomly preyed upon.

Here is a quick answer, and later we’ll discuss it in more detail.

What eats a crocodile? Besides big cats, such as tigers, jaguars, and lions, the biggest crocodile predators are humans. Large pythons and other crocodiles have been known to attack and eat crocodiles as well. On the other side, baby crocodiles are eaten by many predators. Different carnivore animals and birds of prey would eat crocodiles that are unable to protect themselves.

It is worth mentioning that all these predators would rarely attack crocodiles. Trying to eat a crocodile puts any animal in danger of being eaten instead.

Thanks to its brute strength and strongest jaw force, animals, in general, know better than challenging a fully grown croc.

What Eats a Crocodile?

When we think of crocodiles, we often picture them hunting and eating other animals and not vice versa. Which most of the time is not far from the truth.

Only a few fierce predatory animals would dare to attack and eat a crocodile. However, for all of them, crocodiles do not make the bulk of their diet. Most of them, would only in rare situations attack crocodiles.

In other words, no animal in the world eats crocodiles as their main food source.

Yet, previous experiences have taught us that in the wilderness – there are no rules.

In the wild, crocodiles and tigers live together in many regions. Tigers are the main crocodile natural predators. Compared to other animals, tigers eat crocodiles most often.

Tigers are known for their ambushing skills and deadly attacks with the elements of surprise. Yet, more often than not, tigers would also attack crocodiles on their home turf.

Tigers are great swimmers, and they have no problem fighting against giant reptiles in the water.

It is not a surprising fact that tigers are the most common croc predators. They are the largest and strongest among all big cats, Bengal tigers, in particular.

Jaguars may not be the biggest cat in the world, and because of that, people wonder whether jaguars eat crocodiles. Despite not being the largest cat, jaguars are seen hunting and eating a crocodile in the wild.

Unlike most big cats, which go for the neck when attacking their prey, jaguars during hunt catch their prey by its head. They use their sharp teeth and powerful bite force to pierce through the prey’s skull.

This is not a surprising fact since jaguars have the strongest bite among all felines relative to their size. The power of its bite is 1,500 PSI, which is enough to break turtle shells.

Being a large carnivore predator usually leads to potential clashes with other predators. In Africa, these two apex predators often fight for food or territory.

Lions are the only social big cats, and in the wild, numbers count. So lions often use the pack strength to compete with their enemies.

In short, yes, lions eat crocodiles. Yet, lions don’t hunt crocs as a food source, and most of their battles happen because of the nature of competition.

You can read the full article on why lions eat crocodiles; and who comes out more often as a winner after the collisions.

Taking our strength into account, we represent the least threat to crocodiles. Yet, using the equipment for killing wildlife, humans are the number one crocodile predators.

Like every wild animal in the world, crocodiles also are hunted and eaten by humans.

According to Professor Gordon Grigg, more than half of crocodilian types are near extinction.

In different parts of the world, different reasons affect the crocodile population. For example, in India, the number one threat for crocodiles is natural habitat loss.

On the other side, in the Philippines, crocodiles are killed for their meat or leather. While in the United States and Australia, hunting crocodiles is against the law.

Yet, many people are still breaking this law. Not understanding or not caring about the animal endangerment.

Related:  Can Crocodiles be Domesticated?

Most pythons are carnivores, and they will eat a wide range of animals. Anything that can fit their elastic mouth, pythons will try to swallow it.

Although it is not very often, pythons do attack and eat crocodiles. Pythons are aware that eating a crocodile always goes with the risk but with greater returns.

When attacking a crocodile, a python wraps itself around the animal. Gradually restricting its air inhalation. Once the heartbeat stops, a python stops using its energy for strangling and starts preparing for the next step – swallowing.

Crocodiles are cannibalistic animals. They are known to eat each other to control their population.

During mating season, male crocodiles are especially aggressive towards one another. A lot of fighting comes for gaining female access.

Unlike adult crocodiles, small crocodiles have way more predators that need to be aware of.

Despite being guarded by their mothers – only around 1% of all hatchling crocodiles reach maturity.

The most common juvenile crocodile predators are eagles, egrets, herons, and wild pigs.

Crocodiles are fierce reptiles, and they don’t have many natural predators. Only a few animals in the wild would dare to attack an adult crocodile.

Yet, these animals are not the biggest threat to crocodiles’ survival status. Human hunting and habitat loss are the main threats to crocodiles’ population size.

And that’s all for today. Thank you for reading the post; we hope you have learned something new today. At the very least, if someone asks you, “what eats a crocodile” – you know the answer.