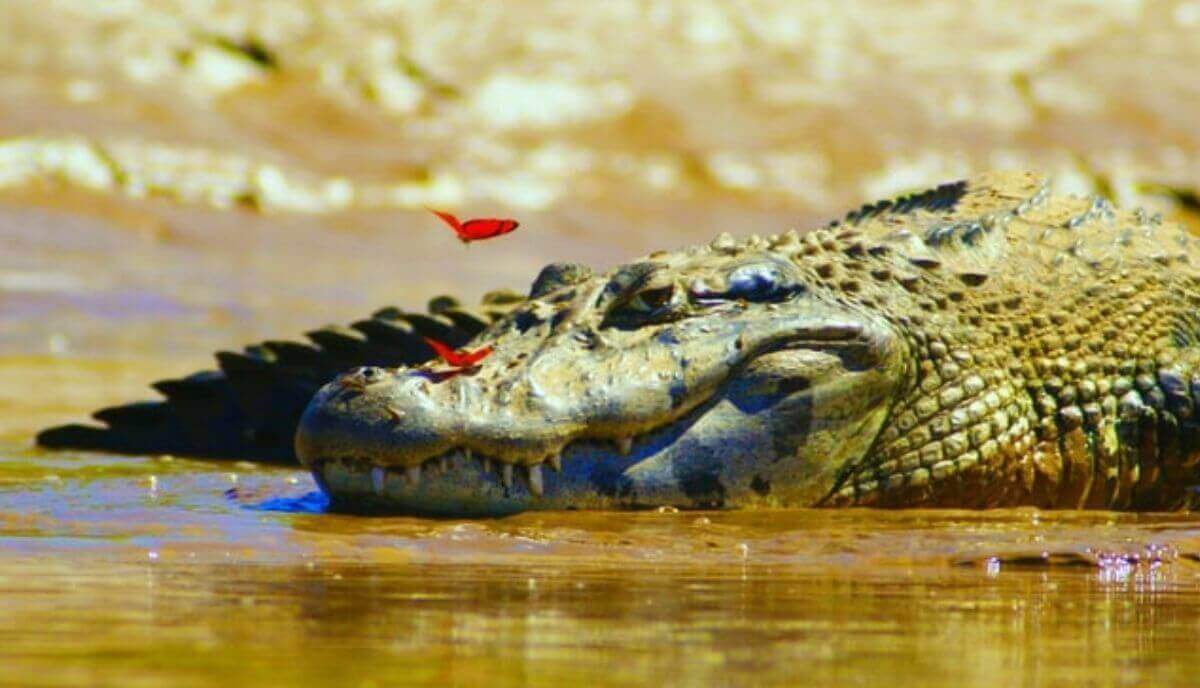 Many confuse crocodiles with other members of the Crocodylidae order, like alligators or caimans, but true crocodiles have their specific traits. These massive semiaquatic reptiles live in many tropical areas across the Americas, Africa, Asia, and Australia.

Crocodiles are one of the strongest predators in the whole animal kingdom, and due to their toughness and hard skin covered in scales, many people wonder if crocodiles feel pain?

Yes, crocodiles feel pain, and they are very sensitive to it. Their armored bodies will shield them and make them more resilient to the attacks, but they will still feel pain if attacked. Crocodiles’ sense of touch is concentrated in a series of small, colored domes dotted across their skin. These spots are responsible for the level of sensitivity crocodiles experience.

But do crocodiles feel emotions, and are they bulletproof? Keep reading to learn more about this unique creature!

Yes, like every other living creature, crocodiles feel pain. We’ve seen them portrayed in many stories, movies, and cartoons as villains and powerful creatures. They are the living descendants of the almighty dinosaurs, so it’s almost normal to think they don’t feel pain and are not sensitive.

Even though their skin is thick and looks entirely impenetrable, but it is not. Crocodiles can feel pressure and pain.

Their thick skin acts as an additional layer of body armor, but they still feel pain. The levels of sensitivity crocodiles feel are more developed than that of many animals.

For example, the touch sensors concentrated in one spot on their skin are more sensitive to touch and vibration than fingertips in humans.

As a result, crocodiles can feel the touch on their skin, even if it’s just a slight touch. Almost every living creature, including crocodiles on our planet, can feel pain, except if they are disabled somehow.

So, next time when you notice a crocodile, know that despite their rough exterior, they too can feel pain.

Do Crocodiles Have High Pain Tolerance?

So, when people know that crocodiles can feel pain, they assume that they have an extremely high pain tolerance due to their armor-like thick skin. The truth is quite the opposite of the common belief, and it says that crocodiles are one of the most sensitive animals.

Crocodiles will feel pain, and they will respond to it more severely than other animals due to the number of touch sensors they have all across their bodies.

It is said that invertebrates do not feel pain, but there were many arguments in the science circles about that.

Invertebrates are cold-blooded animals that don’t have a backbone. Some live on the land like spiders, worms, and other insects, while others live in water like crabs, clams, lobsters, octopuses, squids, etc.

But there has been some evidence pointing out that crabs, lobsters, and even octopuses have a capacity to experience pain. There have been some situations in which a particular neurological reaction was present when an invertebrate was touched.

So, it’s up to time and research to determine what animals exactly can’t feel pain.

Crocodiles feel emotions, yes. It’s funny to say it like this or even consider this as truth, but crocodiles are not that rough and emotionless like they are depicted to be. According to the years-long observation of crocodiles, scientists have learned that these animals are loving and emotional predators.

Yes, it can feel a bit like a paradox, but it’s been noticed that crocodiles can feel emotions and are very social, as a matter of fact.

And by engaging in various forms of play, such as locomotor play, social play, and play with objects, crocodiles feel pleasure, which is an emotion in return.

Of course, these emotions are far less than what people feel, but for scary beasts like crocodiles, having any kind of emotion is quite surprising.

Crocodiles cannot regrow limbs. It’s a common misconception that crocodiles can quickly regrow their limbs if they are cut off or bitten off. People often think that’s a fact because many other reptiles are capable of doing it. Mainly small reptiles like geckos, lizards, and iguanas can grow new limbs if they somehow lose them. However, crocodiles are not part of that group, of regrown-limbs reptile group.

Another possibility because people assume that crocodiles can regrow limbs is the fact that recent scientific research has found out that one large species can regrow its limbs.

Can you guess which one? If you guessed if it was an alligator, then you were right.

Alligators are the largest known animal that can regrow its limb. And what can they regrow? Alligators can regrow their tails if they are severed. People often confuse crocodiles and alligators, so maybe that’s why many think that crocodiles can also regrow their limbs.

But the truth is that crocodiles can’t regrow their limbs, or we’ve just haven’t seen it in action. But still, crocodiles are great, friendly animals that can feel pain despite their rough looks and thick skin.

Crocodile skin has not evolved to serve as bullet protection. Even though they can survive a few bullets, a well-placed shot in the brain (just behind the head) is enough to put an end to a crocodile life.

However, even though it is illegal to hunt crocodiles in many countries, killing these majestic creatures is still a common practice.

And also, don’t forget that crocodiles can also feel emotions, so don’t think of them as villains and bad guys because they are not.