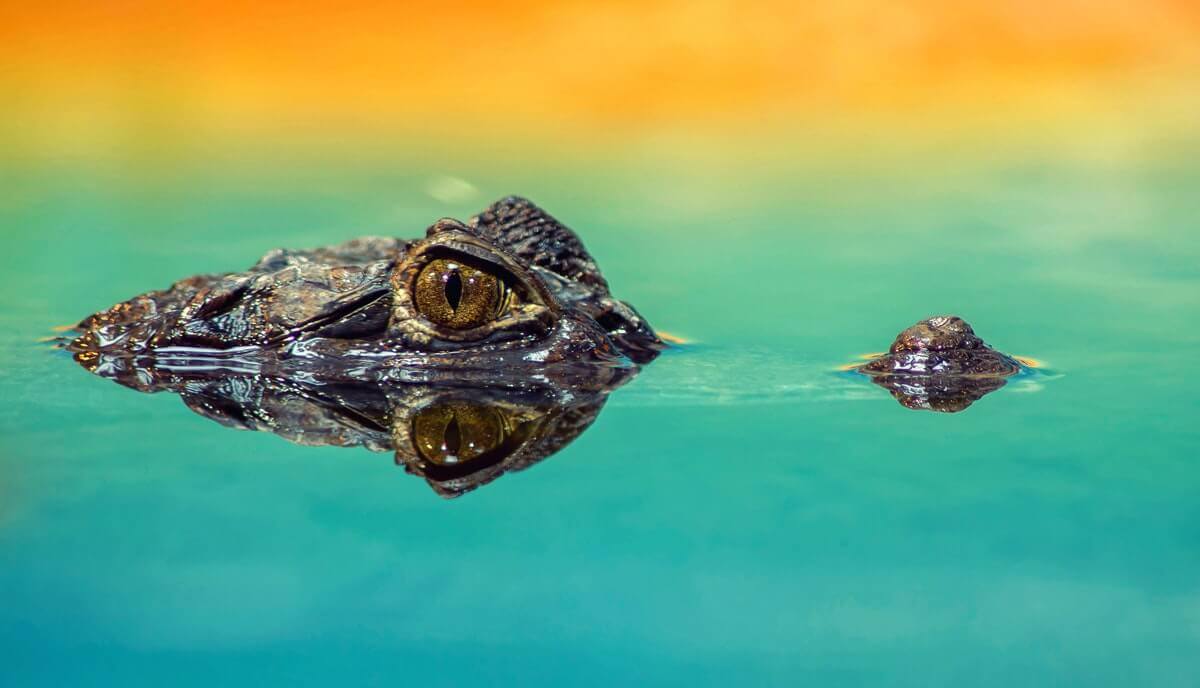 When we think of crocodiles, the first thought that runs through our heads is bloodthirsty ancient predators, which is not far from the truth.

Crocodiles are fearless carnivores known for their big size, aggressiveness, and power. They can take down almost every creature on the planet.

But can these reptiles be domesticated; can crocodiles be tamed?

No, crocodiles can’t be tamed. Some people do have a crocodile as a pet, yet keeping a crocodile in captivity does not mean that the animal can be tamed or domesticated. Crocodiles are dangerous and unpredictable animals, and their place is in the wild. Crocodiles are led by predatory instincts, and they can never be fully tamed.

Why can’t crocodiles be tamed?

Crocodiles have been roaming the planet since 200 million years ago. There are 28 different crocodilian species, and most of them live solitary lives. They hardly get along among themselves.

Often time, we use the term “tame” in the wrong context. A tamed animal means that the animal is not frightened or not dangerous to humans.

Not a single wild animal can get to this type of relationship with people. Especially not crocodiles.

Cats and dogs are animals are domesticated thousands of years ago, and even they can retain their wild instincts.

Even if a crocodile gets used to being around a human, we can never say that the animal is completely tamed. Just one bad moment can lead to fatal scenarios.

Crocs have the most powerful bite force among all animals in the world. Their jaw can produce power of 3,700 PSI which can break bones with ease.

Compared to shark attacks, crocodile attacks are three times as deadly. These powerful creatures shouldn’t be tamed in the first place.

In addition to the danger of having crocodiles, it is not natural for the animal to live in captivity conditions. It is impossible to simulate their natural habitat, and most captivity crocodiles are suffering or in depression.

Can baby crocodiles be tamed?

However, their cuteness and size are temporary; some crocodile species can grow up to four feet in less than one year.

In theory, a crocodile would easier get used to being around people if the animal has been in the human environment since its birth. Yet, every “tamed” crocodile still has its wild instincts and biological differences compared to domesticated animals.

We need to know that feeding a crocodile and treating it as a pet is not enough. Crocodiles will always have hunting desire and predatory instincts, and trying to tame one is never a good idea.

Can crocodiles be friendly?

No, crocodiles can’t be friendly. People often believe that having a croc is like having a cat or a friendly dog. But this is quite wrong; these reptiles can’t learn to love or be friendly to their owners.

The reason is simple – crocodiles can’t feel these kinds of emotions, and socializing with people is impossible.

However, the world is full of surprises and exceptions. The crocodile named Pocho was one of a kind. This reptile had an unusual connection with a man from Costa Rica, who saved it after being shot in the head.

After the rescue, a man kept coming to the place where the crocodile inhabited. Slowly they build up a relationship that became widely known. Pocho and his rescuer became “friends”. They swam, played, and sometimes even slept close to each other.

This unusual relationship caused great attention for tourists, scientists, and animal behaviorists. After 20 years of friendship, Pocho died at the age of 50.

In most states, keeping a crocodile as a pet is forbidden. But even if it is legal to own a pet crocodile in the state you live in – we highly recommend you not to. Having a fully grown crocodile is like having a dinosaur.

These reptiles eat SO much food. And if they don’t get as much as they would like to, they may display aggressive behavior.

Another reason why it is not a good idea to own a pet crocodile is that keeping one is expensive. And if you want to keep your croc pet healthy, you need to give it the right food and water.

In captivity, crocodiles should not eat only chicken or beef. Their diet should also consist of fish and insects. These reptiles also eat stones in the wild, which helps them with digestion.

However, you shouldn’t offer stones as part of a diet; instead, leave it near the croc’s range, and it will eat it if needed.

When it comes to baby crocodiles, they shouldn’t eat more than three times per week. And their food intake shouldn’t be more than 5% of their body weight.

Besides being expensive, owning a crocodile is a hard and dangerous task. Once again, we encourage you to think twice before purchasing this powerful reptile.

Crocodiles are one of the most powerful creatures that have ever walked on the planet Earth. Trying to tame a crocodile is both dangerous and difficult. Crocodiles can never be fully domesticated. Crocodiles can be merely tamed to behave in a certain way by being conditioned by fear or starvation.