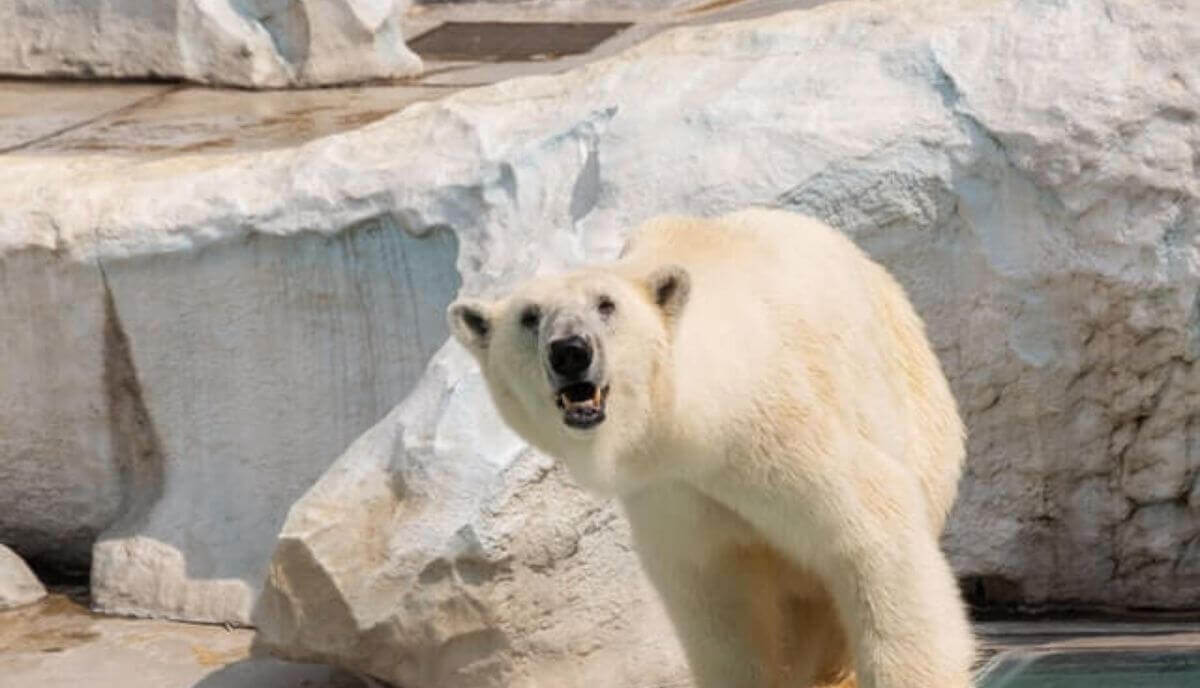 Most people never had the chance to see a polar bear face to face. This is because, unlike other bear species, polar bears live in isolated cold regions far from the most populated human habitats.

Therefore, if you are one of those people that haven’t had a chance to see a polar bear face to face, you just can’t imagine how scary and big they are.

And this just raises further questions: Are polar bears dangerous? Do they attack people?

Polar bears are the largest carnivores on land that are considered to be one of the most dangerous animals on the planet. They are especially dangerous to humans in their habit, in which they are apex predators. In addition, unlike many bear species, polar bears are not afraid of humans, and given the opportunity, they will launch an attack.

What makes polar bears so dangerous, why, and how often do attacks on humans happen – keep reading!

Yes, polar bears can be quite aggressive, and they are believed to be the most aggressive bear species. This is why experts suggest that polar bears should never be approached, especially in their natural habitat. Also, there is every chance for a polar bear to become violent towards humans, based on different circumstances.

Several bear species, in general, are known to be highly aggressive, of which polar bears rank the highest and are even known to be the deadliest of them all. They are the world’s second-largest bear and the largest carnivore on land.

In fact, polar bears are the most carnivorous of all species of bears, and they are the top predator of the arctic.

However, while polar bears can get violent, they are not as insatiable as they are stereotyped to be. During confrontations, they prefer remaining cautious and would often get away from the spot rather than go ahead with a fight.

When a polar bear turns aggressive for some reason, it typically signifies its mood by snorting, hissing, and by lowering its head. Their way of communicating anger is with loud growls and roars, and they use deep growls as a warning sign.

In cases that don’t involve people, most aggression in polar bears takes place between two males, when one tries to steal the food caught by the other and during the breeding season.

For all these reasons and many more, it is highly recommended to admire polar bears from a safe distance.

A 2017 study published in The Wildlife Society bulletin revealed that “nutritionally stressed adult male polar bears” were the ones to pose a serious threat to the safety of humans. Attacks by female polar bears are quite rare, and most happen to protect the cubs.

The study also states that most of the attacks comprised less than or equal to 2 people, during which time the polar bears acted like predators.

The same study provided clear information on the reason why polar bear attacks have dramatically increased over the years. Between the years 1960 and 2009, the number of reported attacks on humans by polar bears was just around 47.

Fast forward to the period between 2010 and 2014, the number of attacks grew to 15, which was known as the highest number ever recorded in such a time frame.

The primary reason behind such a drastic increase in polar bear attacks on humans is believed to be the decline of ice in the Arctic sea, caused by the rising temperatures around the globe.

As a result, polar bears are found spending a lot of their time on land and moving towards populated areas, which leads to more frequent encounters with humans. And therefore attacks and other human-polar bear conflicts.

You May Also Like: What Eats a Polar Bear?

Given the opportunity, and based on the circumstances, polar bears can and will kill humans. The attacks on people are most likely to happen from a starving adult male polar bear. In the period between 1870 and 2014, there were 20 human fatalities documented caused by a polar bear attack.

The opportunities of polar bears killing humans were quite rare in the past; but, as discussed before, due to different reasons, including climate change, scenarios have been changing for the past several years.

This has resulted in increased opportunities for polar bears to come across humans, which in turn result in attacks and killings.

While polar bears are less likely to see humans as a source of food, they are more likely to see us as a threat. They prefer hunting seals and other animals for food, and killing humans is never their priority.

But, when humans get too close to polar bears’ habitat, if the bears are hungry, if a female mother polar bear is with her cubs, and when they feel threatened, they attack, which can sometimes lead to fatalities.

Related: How Dangerous Are Alligators?

Why Are Polar Bears so Dangerous?

Let us explore further and see what makes polar bears so dangerous.

As mentioned earlier, the polar bear is currently the largest carnivore on land and weighs twice as much as a Siberian tiger.

Though female polar bears do not weigh as much as males, they most certainly weigh much higher than humans, ranging between 450 and 650 lbs. (approximately 200 to 300 kg.).

Apparently, polar bears are humungous in size, which is the most obvious sign of them being dangerous to humans. No human can possibly withstand the attack of an adult male or female polar bear.

Polar bears have a bite force of 1,200 pounds per square inch, which makes their bite the strongest of all bear species, including the brown bears and grizzly bears.

If you wish to compare it to that of humans, our bite force is about 162 pounds per square inch, which is evidently embarrassing.

With this incredible bite force, polar bears can easily chomp down on their prey, and not to forget, an adult polar bear can bring its prey down with just a single throw of its muscular paw.

Though polar bears do not normally eat humans, they can, and will, given the opportunity, cause serious injuries and even fatalities with their deadly bite.

Polar bears can run at a speed of 25 miles per hour, which is around 40 km per hour. With this speed, they can easily and quickly outrun a human and with just a swing of its giant paw, can knock down an adult human.

Not just that, the natural habitat of polar bears is the Arctic, the ice. Therefore, their paws are naturally designed to give them amazing grip on ice, much better than any of your shoes or boots.

This makes the predator agile both on the land and in the sea, and if you come across one in its natural habitat, you have no chance of escape!

Meat-eating animals are by default more dangerous than those that feed on plants. In order for a carnivore to satisfy its hunger, other animals need to be killed.

So the execution of other living beings is not a choice. It’s a necessity.

As a result, most carnivorous animals are used to everyday violence, hunting, and killing. And if that carnivore happens to be a massive polar bear, it can’t be worse than that.

These giants require a lot of food, especially fat, in order to survive and store energy. On average, an adult polar bear needs 4.5 pounds of fat to obtain enough fuel in such cold conditions.

Is Polar Bear the Most Dangerous Bear?

Polar bears and grizzly bears are the most dangerous bear species. However, several other species of bears are known to be aggressive and have attacked humans in numerous instances.

Though polar bears’ record of attacking humans is less when compared to the number of attacks by black bears and brown bears, they are still one of the two most dangerous bear species.

How to Survive a Polar Bear Attack?

If you are planning a trip to the polar bear country, it is important that you go prepared. Here are a few tips to prevent and survive a polar bear attack:

Wrapping it Up – Are Polar Bears Dangerous?

In summary, polar bears are extremely dangerous to humans as they are one of the most powerful extant predators. They are the largest land carnivores on the planet that possess a powerful bite force of 1,200 PSI. In addition, polar bears are fast both on land and in water.

Though, given their natural habitat, attacks on humans are not as frequent. In the previous 150 years, there were less than 80 documented attacks by polar bears, of which 20 resulted in fatalities.

There you have it. If you’ve ever wondered ‘are polar bears dangerous’ – now you know the answer.

Thank you for reading. I hope you liked this article – here’s a recommendation of a similar read: Are Lynx Dangerous?