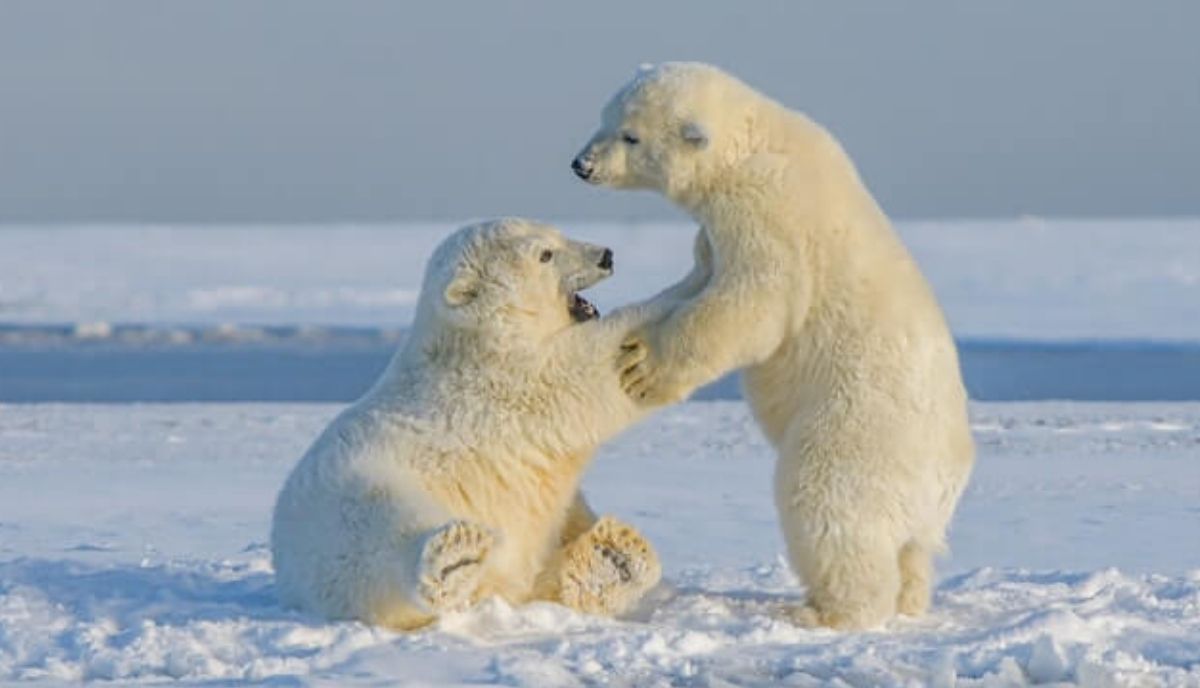 Polar bears are some of the scariest and most dangerous animals in the whole animal kingdom. Due to their intimidating size, not many animals would dare to go after these hyper carnivores. But, there are a few.

Male polar bears. It may surprise you to learn that polar bears are their own worst enemy. Much of the eating of polar bears is done by the males, in different instances, and for various reasons. Unfortunately, females and cubs are most vulnerable to these attacks. However, besides their species, other polar bear predators include wolves, killer whales, and humans foremost.

As a species, adult bears do not have natural predators. They are both fearsome and aggressive in their hunting, and usually, they are the ones that hunt and not the other way around.

Additionally, given the sheer size of polar bears, and how immensely powerful they are, it is difficult to imagine any creature being able to successfully stalk, take down and consume an entire polar bear.

Surprisingly, there are a few animals that eat polar bears. Some of which may be even more surprising than polar bears preying on each other.

Humans throughout history have actively hunted, killed, and eaten polar bears. Using the organs for traditional medicines, and other parts, such as teeth, claws, and fur for commercial purposes. Today, polar bears are typically hunted for their meat and clothing. (source)

And even though the population of polar bears is vulnerable, in many places, these majestic creatures are legally hunted.

However, polar bears naturally are not afraid of humans. And even though truly man-eating bears are not common, of all bear species, polar bears are most likely to attack a person. Consequently, this makes them one of the most dangerous species to human beings.

As unlikely and odd as this seems for species to display cannibalistic behavior, male polar bears are quite notorious within their species. For a start, they habitually hunt and kill bear cubs. They particularly target cubs that are under one year of age.

Males are too large to get to the cubs within dens, but they will hunt cubs above the ice. Many times females, being half the size of the males, are no match for determined males.

Sometimes, even the female polar bears will eat their young. This, however, is not common practice and will occur only when the female is facing starvation.

Female polar bears with cubs occasionally fall prey to the males as they try to protect their young ones. If a female dies in the conflict, the male will consume the carcass.

Wolves are another species that eat polar bear cubs. Although this was not a practice among wolves, it would seem that this is beginning to change. There have been increased reports of wolves hunting polar bear cubs, particularly toward the end of July when they come onto land off the ice.

Wolves naturally hunt in packs and what has been observed is that some wolves will create a distraction around the mother bear, pulling her attention away from her cubs long enough to enable other members of the pack to snatch her cubs from her.

Unfortunately, when wolves are in large numbers, the female cannot react swiftly enough to protect her young.

Although wolves’ primary food sources include, deer, elk, caribou, and moose, there seem to be plenty around their habitat, it is now emerging that these hunts demonstrate that the wolves have added another species to their food source options in the form of polar bear cubs.

It would be rare that a female polar bear would leave her cubs unattended. However, with rapidly melting ice, sometimes cubs get stranded on the ice and get separated from their mothers.

And in such cases, a killer whale is around at such a moment it would drag the cub off the ice sheet into the water, just like it would a seal.

Killer whales are fearsome apex predators in the ocean, as equally as polar bears on land. However, they do not naturally prey on polar bears. Their diet consists mainly of a wide variety of marine mammals.

It has been speculated that, with the changes in climate that have caused many animal habitats to overlap, there may be a rise in conflict between these two species as they compete for food sources that are the same.

How do Polar Bears Protect Themselves?

Polar bears have few techniques and adaptations that help them protect against predators. The primary way is nature’s given camouflage.

The white fur of polar bears makes it a little more difficult for a predator to see them against the arctic ice. This enables the bears to move around and hunt for food when they can.

Hiding is another way that polar bears protect themselves from harm. Females and cubs hide in dens built within the ice. These dens are designed in a way that leaves a very narrow opening that is too small for male polar bears to exit that can be used to getaway.

Polar bears do not hibernate fully. They fall into a mid-hibernation state from which they can quickly come out. This enables them to respond quickly to predators. So, although they are in a state of deep sleep, they are not entirely vulnerable.

And lastly, and most importantly, the first line of defense is their intimidating size. By being such powerful and large beasts, most wildlife would need to protect themselves from polar bears, and not the way around.

What Are Polar Bears Afraid of?

Polar bears are by design, killing machines. With claws that are sharp and strong enough to dig through the icy habitat, they can cripple any being with one strike.

Combined with powerful paws, these claws make for tools of death. Polar bears are not only a hunting species, they are also opportunistic feeders.

The hunting skills of polar bears are unparalleled. They will ambush seals near breathing holes or stalk them on the ice.

Polar bears will also dig out young seals from their snow shelters. Being excellent swimmers provides opportunities to also hunt in water, and they have been known to kill beluga whales.

In Summary – What Eats Polar Bears?

Polar bears are apex predators, and due to their size and strength, adult ones do not have natural predators, except for humans. However, polar bear cubs are eaten by wolves, killer whales, and other polar bears.

Sadly, animals are not the main predators of polar bears. Global warming and melting of their icy habitat results in habitat loss which is the primary threat for these majestic creatures.

And that’s it. Thank you for reading the “what eats polar bears” article. If you liked this post, we would like to recommend you a similar read: What Eats Vultures?