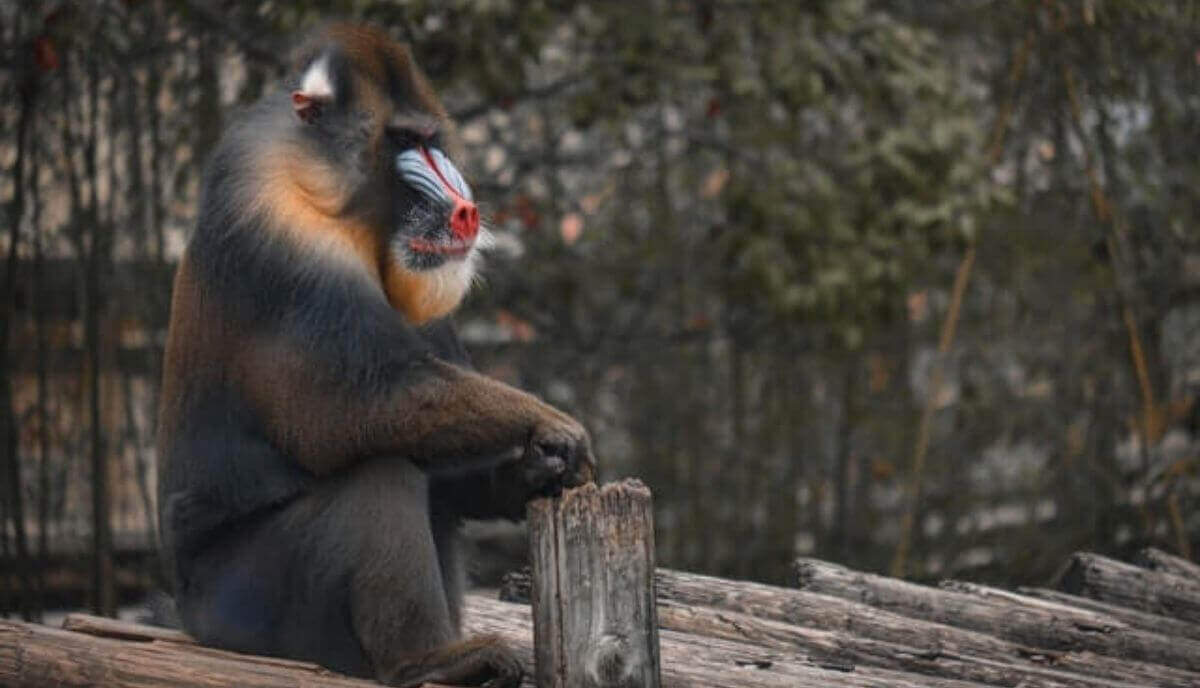 Mandrils are members of the Old World monkey family. They are usually shy and reclusive monkeys characterized by their colorful faces. It is known that they are the largest monkeys in the world, which leads us to our question – are mandrills dangerous?

Mandrills can be dangerous, mainly because they are strong primates that have long and sharp teeth. They can severely hurt people or other animals if they feel threatened by them. With their long canine teeth, they can easily penetrate the skin of both humans and animals and even bite off parts of the skin.

How Dangerous Are Mandrills?

Mandrills can be very dangerous if they feel threatened or irritated. But, in most cases, mandrills that live in enclosures are acclimated to humans, but even wild ones are rarely aggressive.

However, like with any wild animal, you never know when it could attack you. And if a mandrill attacks you, it could be perilous. Their teeth are big enough and strong enough to cause severe skin penetration, and a specific injury can even be fatal.

Even if a mandrill doesn’t want to attack you, it could easily do it by accident. They could be just playing, but they don’t know when it’s enough and when they should stop.

To conclude, mandrills can be very dangerous and cause injuries. They are animals with wild instincts that can easily be irritated by other animals and humans, and you should always be on the lookout when you are around them.

Yet, more often than not, mandrills are peaceful animals and will only exhibit aggressive behavior if cornered or threatened.

Are Mandrills More Dangerous Than Chimpanzees?

When it comes to who is more dangerous to humans, again, chimpanzees are the winners. It is because they are considered to be more intelligent, bigger, and stronger than the mandrills.

Mandrills have their weapons in the form of teeth, and when they attack, they attack like a predator, but chimpanzees are far more intelligent than the mandrills, and they use their intelligence when attacking.

Mandrills may be furious and vicious, but chimpanzees are much more dangerous because they are more intelligent and definitely stronger.

Mandrills can be very aggressive, and they can quickly be irritated. They are normally shy and peaceful, but they can get aggressive. Mainly the most aggressive mandrills are adult males because they are highly territorial and defensive. The dominant adult males are big and usually the most dangerous and aggressive. When they want to warn their enemies, mandrills will show their dog-like teeth.

So if you happen to walk near mandrills’ territory, you shouldn’t get on their nerves. And if you ever spot a visibly aggressive mandrill, you should stay away.

Besides showing its long teeth, when an adult male mandrill wants to show its power, it will also erect its head crest. However, this is considered a peaceful sign of warning rather than preparing for an attack.

But when they want to be even more persuasive, they show their natural aggressive face and will shake their heads and produce disturbing sounds. The act of aggression is often shown with roars, screams, and other high-pitched sounds. To show that they are serious, they will even slap the ground with their hands.

It’s interesting that even though mandrills aren’t the strongest primates and animals, they will not bow down to others. There have been cases where mandrills showed their teeth and signs of aggression in front of many predators, such as leopards. They don’t back down when defending their territory, and they are not afraid to show hostility.

How Strong is a Mandrill?

A male mandrill is significantly strong compared to even larger animals. They are also not cowards and won’t run if they feel threatened; instead, they will use their strength and confront their enemy. When it comes to comparing mandrills and humans, mandrills are not stronger than humans per se. An adult male mandrill can weigh from 20 to 40 kg, and an average adult human weighs about 80 kg.

So, viewing that difference, you can assume that humans are more robust by the numbers, and that’s a fact. But mandrills are wild animals with solid muscles and sharp canine teeth, and they can easily hurt a human severely.

When you compare mandrills to other monkeys, they are the largest and the strongest. But they are not the most prominent and most muscular primates. It’s a common misconception that every primate is a monkey. But the reality is that primates are divided into monkeys and apes.

And if you want to compare mandrills to other primates, they are not the strongest. Other apes are bigger and stronger than mandrills, and they could easily beat them in a fight. Gorillas and chimpanzees are far stronger than a mandrill.

Mandrills rarely attack humans, but it can happen. Like any feral creature, mandrills can get aggravated, resulting in a defensive attack. Mandrills don’t attack humans because they do not see humans as prey. If a mandrill attacks a human, usually a human is the one that provoked the animal, so the mandrill felt that his life was threatened.

Cases of a mandrill attacking a man without being previously abused or cornered are extremely rare. Also, what’s more, likely to happen if a mandrill sees a human in the wild is to run because it will get scared.

Can a Mandrill Kill a Human?

Yes, a mandrill can kill a human. But there haven’t been cases of mandrill killing a human in recent history, unlike with other primates.  In theory, the mandrill is fully capable of killing a human because it is a wild and robust animal with sharp canine teeth.

A mandrill could kill a human by accidentally biting a specific spot and puncturing a specific artery.  So, it’s always a solid idea to stay away from it.