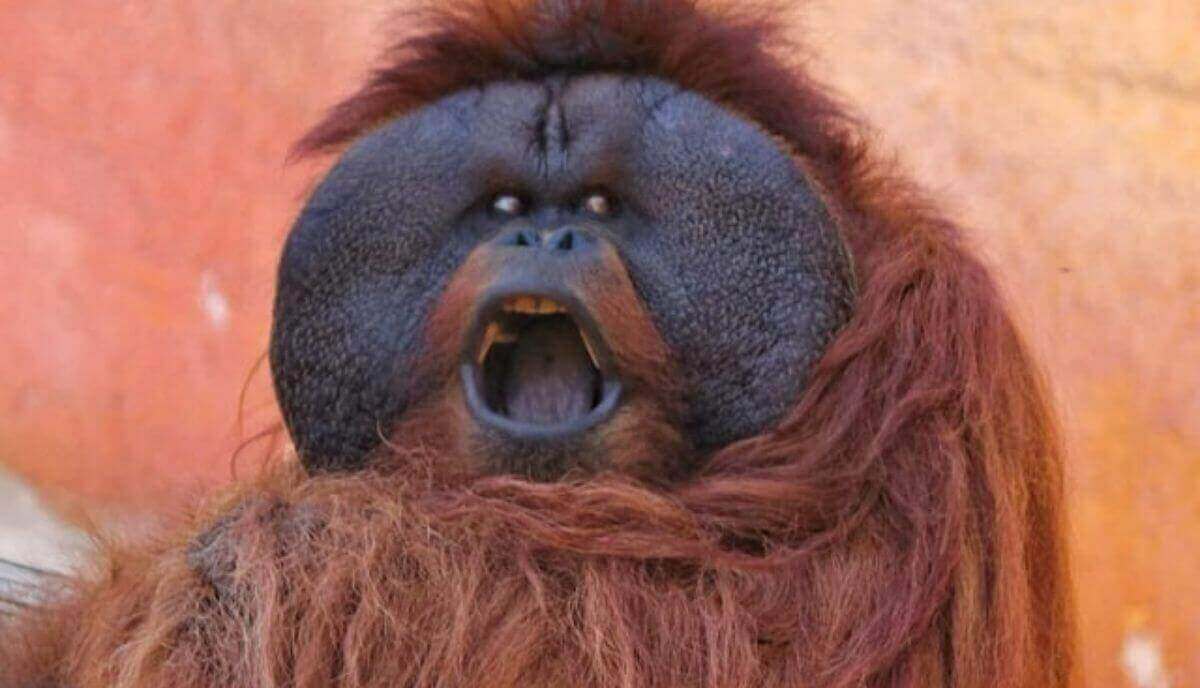 Orangutans are primates, and even if many think that they are monkeys, orangutans are apes. They are known for their ginger fur and for being the world’s biggest arboreal mammal. Because of their appearance and size, many are wondering are orangutans dangerous?

Orangutans are not dangerous, and they are neither aggressive towards humans nor to each other. But since orangutans are strong wild animals, one should always be aware of that when around them. It means that a human never knows what and when a wild animal will do, despite its non-aggressive nature.

How Dangerous Are Orangutans?

Orangutans are not particularly dangerous animals. There haven’t been any situations where a human was threatened by an aggressive orangutan, both in the wild and in enclosures. In fact, they are known to be quite gentle and timid.

Orangutans that live in the wild spend most of their time in the trees, and they rarely interact with humans. They don’t often come down to the forest floor if they don’t need to, so humans don’t have many opportunities to interact with an orangutan. Also, they are reserved, don’t like to be bothered, and don’t bother anyone.

If there was a case of an orangutan being aggressive towards a human, it was often the case when an orangutan was reintroduced to the wild after being in managed care, which is strange, considering that they are familiarized with humans more than the wild ones.

Are Orangutans More Dangerous Than Gorillas?

And orangutans are also not more potent than gorillas. Orangutans are meant to climb trees, and their feet are adapted so that they can do it quickly. Gorillas are terrestrial animals; they are more agile on the ground, giving them an advantage in a fight.

They are also bigger, stronger, and use their strong teeth to fight, making them more dangerous than orangutans.

Orangutans don’t attack humans, and there have been very few to no cases when an orangutan attacked a person. Orangutans are considerably large and robust, but they don’t use their strength for aggression towards human beings.

Everyone who knows the true nature of orangutans knows that they are gentle and loving. Some would even say they are pretty lazy, considering they can sit in the trees for hours, not do anything, and stare at one dot.

Many love to call orangutans gentle giants because those are the words that best describe them. Their gentle nature doesn’t let them attack humans and even other animals or apes. There haven’t been almost any cases where an orangutan attacked a human.

However, there were some cases where orangutans showed aggressive behavior towards a human. But they were probably agitated and aggressive for a reason.

We as humans don’t like to be bothered, and we get irritated when someone is harassing us or occupying our personal space. Well, orangutans and humans are very much alike, and we should understand when an orangutan is acting aggressively.

But all in all, even when they are aggressive, they are not likely to attack a human. They want to act out and warn everyone around them that they feel irritated and that it is time to let them be.

With that on our mind, please consider being super gentle around orangutans if you ever get a chance to meet them in the wild or an enclosure. They deserve to enjoy their time in peace, like anyone else, so let them be.

And something that you should always have on your mind is that an orangutan, no matter how gentle and shy it is, it’s still a wild animal. And wild animals are unpredictable.

Orangutans are not that friendly apes. We’ve said that they are not aggressive and not dangerous, but they are neither friendly. Not being dangerous and aggressive doesn’t automatically imply that an animal, in this case, an orangutan is friendly.

Like we learned, orangutans primarily spend their time in the trees, rarely climbing down to the ground. That kind of behavior keeps orangutans from being friendly even if they want to because they often don’t have a chance to meet people.

Orangutans like to be alone, high up in the trees, possibly with their thoughts, but that we will probably never know. What we know is that they are shy and quiet animals, much like an introverted person. They are not even that friendly with each other.

There have been cases of friendly orangutans. But those were the ones that were raised by people in a rehabilitation center and released into the wild. Those orangutans can be drawn to humans because they are used to them, especially those born in the rehabilitation centers and raised there. Also, a few cases of aggressive orangutans released from rehab centers were noted. And that kind of behavior can be explained by the confusion that orangutans feel.

There was also one case where a female orangutan was more than friendly with a woman. A woman was on a guided tour in Indonesia, hiking and enjoying the rainforest. They’ve come across an orangutan with a baby orangutan on her back. The orangutan grabbed the hand of the woman and didn’t want to let it go. The animal wasn’t aggressive, but nobody knew why it was holding the hand of the woman. She held her for five minutes, and eventually, she let her go after being bribed with treats.

An expert explained that this kind of behavior is strange, and it mostly happened because the orangutan had prior interactions with humans and was a rescue. It was also unusual that it was on the ground in the first place, not in the trees. At least everything ended well, for both parties.

Summing Up – Are Orangutans Dangerous?

Orangutans are normally peaceful and non-aggressive apes who don’t pose a threat to people. They are shy and quiet animals who spent most of their time in trees, and they usually tend to avoid humans. Despite the strength of an orangutan, there haven’t been recent cases of orangutans attacking humans.

That being said, in case you get the opportunity to visit the rainforests of Borneo and see orangutans, you should not be worried about their aggression. But, it would be wise to keep in mind that wild animals should be treated with a dose of caution regardless of their nonviolent personalities.

And that’s all. I hope I’ve helped you solve the mystery and given you a detailed answer to the question ‘are orangutans dangerous’?

If you enjoyed this type of article, I would recommend you to read also – Are Peacocks Dangerous?