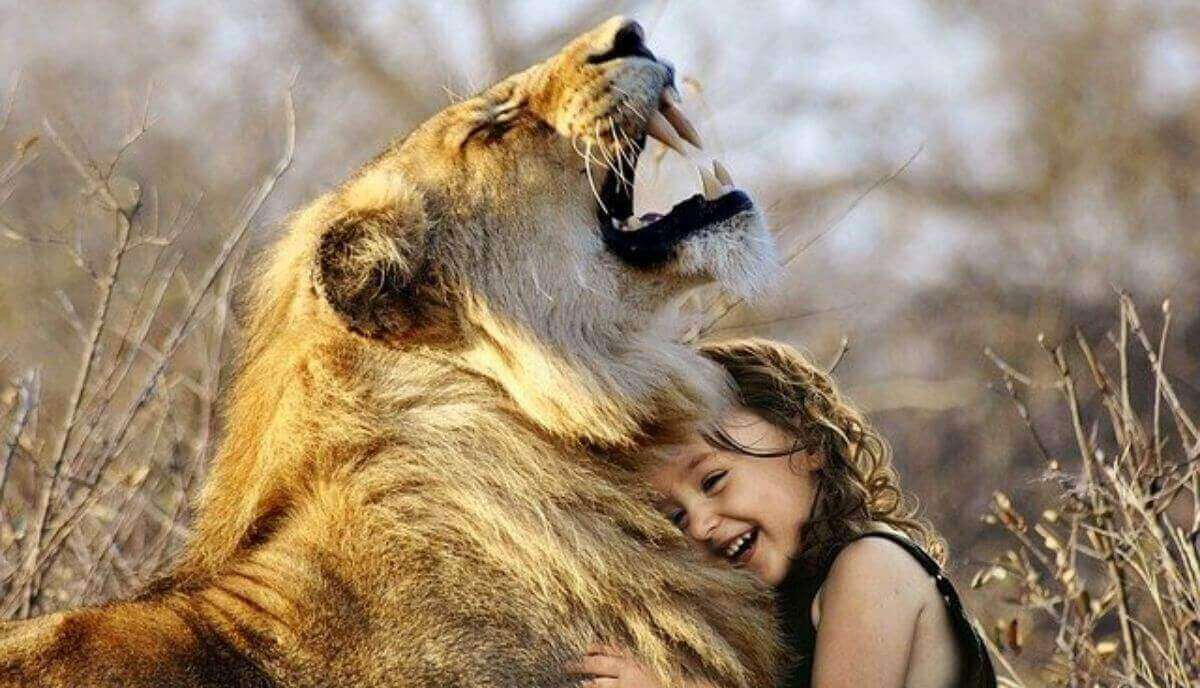 You must have seen enough videos on social media of humans cuddling and playing with lions. Don’t they look adorable, being absolute babies around their human friends?

But are lions friendly to humans in general? Is it safe to be around them in the open?

That’s the question that may be in your mind if you love these majestic animals. Let us know more about the nature of these big cats and how friendly they are.

Lions can be friendly and tamed to a certain degree and may even show affectionate behavior towards humans. However, they remain wild and ferocious, so even the friendliest lion with the calmest disposition can do fatal damage in seconds. Lions may be extremely loving creatures but may also attack their owners if not treated carefully.

There are ample instances in real life of lions sharing the most beautiful bonds with their keepers. It proves that even though lions belong to the wild and are one of the most dangerous creatures on earth, they can still have loving hearts.

Contrary to the popular misconception, lions are not vicious creatures or cold-blooded killers that attack humans without reason. They are quite reliable and friendly around their keepers.

However, since their nature makes them beings of the wild, it would not be wise to let your guards down before a lion. You must also remember that strength of a lion is tremendous and might cause severe injury unintentionally in the act of play.

Lions in the zoo form the friendliest relationships with their keepers for years and are often seen playing like innocent cats. They are happy when they get their food, water, and sleep.

But you cannot trust them completely. If a lion feels threatened by some of your actions or gestures or loses his temper, it can become ferocious and cause fatal injury in the blink of an eye.

Thus, even if a human has raised a lion as a cub, and they have the best bond, he still needs to be aware all the time. Acting with caution is the most important thing here. You always have to keep in mind that lions are dangerous, and you need to understand their mood and temper and treat them nicely with love and respect to help them maintain their pleasant demeanor.

A wild animal will naturally act out of wild instincts, even if they have never lived in a forest. They are dominant animals and do not like humans commanding them. It makes them feel threatened and may trigger them to attack.

Therefore, you cannot treat a dog and a lion in the same way. It is important to respect the wildness of a lion and remain alert while petting it.

Are Lions Friendly To Cats?

Lions are generally neither friendly nor hostile towards cats. Interaction is very less between a big cat and a domestic cat. There haven’t been too many reports of lions either killing or being too friendly with house cats.

These big cats may recognize the smaller members of their family and bond well, and such instances may be rare.

However, it is also not impossible for lions to kill and prey upon small cats, even if they generally do not do so. The reason is that the species hardly interact in the wild, and the size of a house cat is too small for a lion’s appetite.

Yes, lion cubs are very friendly as their nature is quite playful. The cute little cubs look adorable while at play and resemble kittens. Like human children, lion cubs love to play all day and are often seen playing with their parents, climbing up their bodies, or pulling their tails.

Lion cubs bond well with their human keepers and engage in playful activities. Even though they may act on their wild instincts, they are harmless because they are still small.

Are Lions Scared Of Humans?

It is probably the nature of lions to be afraid of humans on foot. It is not proven whether they are scared or feel threatened by humans, but the latter is probably the possible answer. Cubs are playful and inquisitive, but as they grow up and follow the members of their pride, they learn to fear human beings. They try to flee or avoid humans facing them or charging them together in a group with shouts and clamor.

In areas with human settlements near forests having lion habitats, lions encroaching into the human areas is quite common. Unless the lion is a man-eater, they generally avoid humans and prey on the livestock.

That is why people facing a probable lion attack are advised to face a lion and try to appear bigger to scare them off. Running in fear or crouching triggers their hunting instincts to chase and prey upon the human.

Read Also – What is a Group of Lions Called?

We cannot say that lions are not fond of humans. Even if it is not their nature to bond with humans and behave as domesticated pets, they do have the ability to show affection. Several zookeepers recount tales of their unusual and unconditional bonds with lions who have grown up with them and want them as constant companions. They play with their human friends, sleep with them, and cuddle them with love.

If they are around people who love them, care for them, and respect their dominant nature without trying to command or threaten them, lions grow affectionate towards such humans.

When lions feel safe and comfortable, they too show loving behavior towards humans around them. In most cases, they attack people who irritate or threaten them, but also when they are starving and desperately need food.

It’s hard to say whether lions can remember human beings. There aren’t any proven facts that claim that lions do remember human faces in their memory. There are rare instances, though, of lions recognizing their human friends and going to hug and cuddle them.

It is, however, not impossible for them to remember their human keepers. If they begin to feel affectionate towards humans who do not threaten them and consider them a member of the pride, they may remember their face.

After all, they recognize their keeper and feel comfortable being with them when treated nicely. But, it’s not known whether lions remember the faces of humans who are possible threats to them.

Related: Are Bears Friendly to Humans?

Can You Pet A Lion?

The answer to this would be yes, but remember that it is dangerous to keep a lion as a pet. Firstly, if you are not a trained keeper, it may be life-threatening to try and pet a lion. Moreover, lions can only be tamed when they are cubs. It is impossible to pet a mature lion.

The process of taming and petting a lion since its cub days is quite expensive, time-consuming, and requires lots of effort and patience.

Most countries have stringent laws regarding owning and petting wild animals like lions, and some countries even ban the act for good reasons. However, one must remember that even if they have petted a lion for years, acting cautiously around them is necessary since they are wild animals and act naturally out of their wild instincts.

Read the fascinating tale of Zion and Frikkie von Solms.