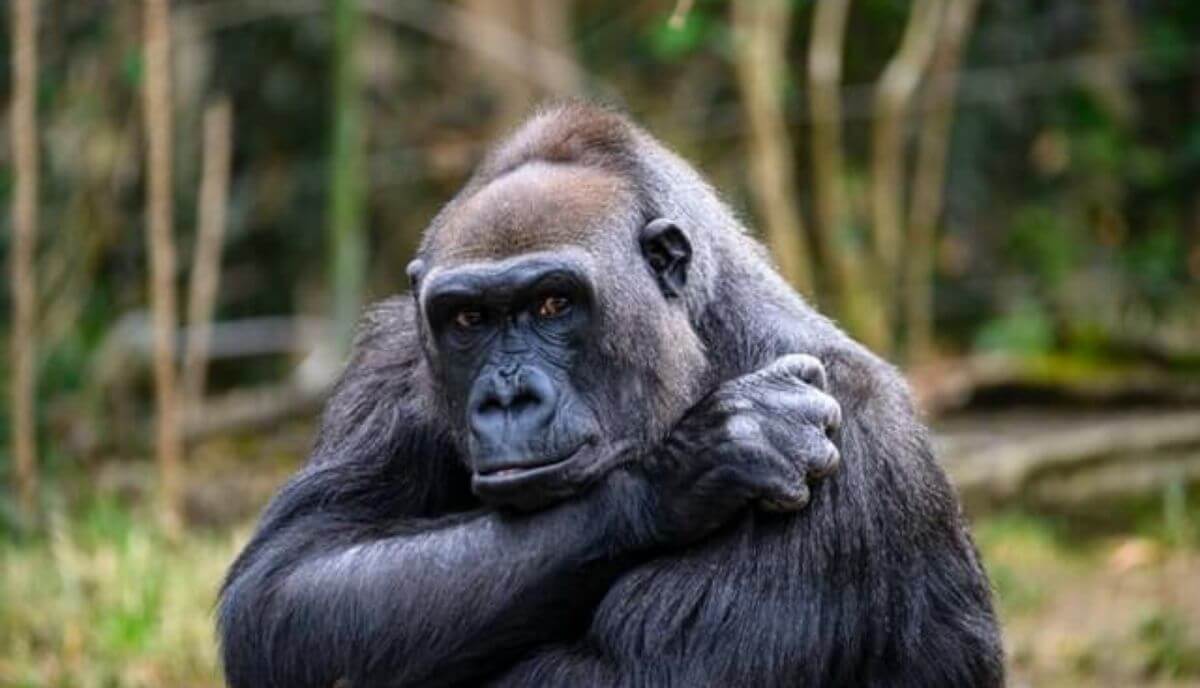 Did you know that we share 98% of our DNA with gorillas? And, that together with bonobos and chimpanzees, gorillas are our closest relatives?

But you may wonder, what’s their fundamental nature? Are gorillas friendly to humans and other animals in their habitat?

Yes, gorillas are friendly and peaceful animals. In fact, they are widely known to be nice and gentle primates that display quite a lot of human-like behaviors. However, these friendly giants are still wild animals, and they do tend to get aggressive towards humans when they feel disturbed and/or threatened.

What do Gorillas Think of Humans?

New research conducted on captive gorillas has revealed quite a lot of interesting information on what gorillas think of humans and their behavior.

According to the research paper, gorillas are able to recognize voices of humans that they are familiar with purely based on their relationship with the speakers.

They found that when gorillas listened to the voices of people they have had negative experiences with, like veterinarians, or strangers, they responded negatively. These responses include signs of distress, increased vocalizations, and increased vigilance.

The same gorillas had minimal reactions when they heard the voices of their long-term keepers, with whom they had positive relationships or interactions over the years.

Though this particular research focuses on captive gorillas, researchers are confident that the findings have wider implications for those animals in the wild as well.

It couldn’t be any clearer that gorillas’ views of humans vary depending on their type of interactions and relationships with us.

Gorillas raised in captivity are known to bond with humans, especially with their everyday visitors and caretakers. However, wild gorillas are naturally shy, and they tend to avoid humans in their natural habitat.

Gorillas, in general, are friendly and social animals, but due to their giant, strong, and muscular body and size, people fear them. And many would flee away and scream whenever they came across a gorilla.

But, thanks to Dian Fossey, who performed extensive research on a group of mountain gorillas, people started seeing gorillas as friendly animals. She was known for saying that she feels more comfortable among gorillas than with people.

And such a view from someone who had been working very closely with wild gorillas helped to change people’s perceptions of these primates.

Furthermore, research, like the one discussed earlier, makes it possible for humans to understand that gorillas do like humans, as long as they don’t feel threatened.

Of course, they remain vigilant of new people and their voices, as they should be, to make sure that a particular person would not cause any harm to them or their group. This is a common trait found in most wild animals, and gorillas displaying the same doesn’t come as a surprise!

So, as long as a person doesn’t approach a gorilla in a way that the animal feels threatened or scared, the primate will have no problem with the human.

And for a gorilla to specifically as a person, it will naturally take time, as the animal has to form a positive relationship with the individual.

Despite their rugged looks, gorillas are indeed compassionate and are known to go out of their way to protect humans. While they may not appear protective, especially when we see them in zoos, from the other side of the fence, those who have spent time with these animals closely claim that they do indeed protect people.

In the wild, there are many cases reported in which gorillas stopped humans from walking into poachers’ traps.

In captivity, there is this one incident where a gorilla was found to protect a small boy after he accidentally fell into its enclosure.

Experts agree that the gentle giant’s actions like nudging the boy towards it, placing its paw on the child, etc., were protective.

Can You Have a Gorilla as a Pet?

No, you should not consider having a pet gorilla. Even though they are peaceful and docile creatures, gorillas do not make good pets. And above all, it is illegal in most states to buy or own a gorilla.

Yes, gorillas are nice, friendly, and peaceful animals that are also known to be loving, nurturing, and protective, but that doesn’t necessarily mean they should be kept as pets. They are one of the most warm-hearted primates known to be caring creatures, BUT they DO NOT make good pets!

Firstly, gorillas are social animals, which means they always want to be around their group (not human groups!), and this is highly essential for their mental wellbeing. Separating a gorilla from its group can impact its emotional and psychological well-being and can even lead to premature death.

Not to forget, they are, by nature, wild animals – big, strong, bold, and muscular – much stronger than humans. Their canines are sharp and long and can easily cause a serious injury in a person, intentional or otherwise.

Moreover, they have a specialized diet and need huge quantities of vegetation for food on a daily basis, which is impossible to offer in a domestic setting.

In fact, many states around the country have banned private possession of gorillas, which means it is illegal to have one as a pet.

Typically found in the rainforests of Africa, these animals, no matter how cute their little ones look, are better off staying in their natural habitat than in your house as your pet.

In this section, we are going to cover some of the most common questions about gorilla’s behaviors and feelings.

How do Gorillas Show Affection?

Gorillas are known to express their affection by touching their noses together and in some cases giving an embrace. Also, these primates build social bonds through grooming.

As we mentioned earlier in this article, gorillas are compassionate and affectionate creatures, and many of their social characteristics are almost human-like.

While gorillas are capable of expressing their distress, pain, or sadness, they do not do the same by crying. Their response to something sad or painful is often through emotional expressions, like facial expressions and vocalizations, and not via crying.

It is believed by researchers and experts alike that humans are the only primate species that cry, pertinent to producing emotional tears.

In the case of gorillas, though the animals are known to grieve or express their sadness or pain in different ways, like banging the floor, vocalizing, etc., they are not known to shed tears as an emotional expression

No, gorillas don’t kiss. Unlike chimpanzees, who have been noticed to hold hands and even kiss, gorillas seem to be socially reserved when it comes to displays of such affections. These primates prefer showing their affection by grooming but rarely do they share embraces, let alone kiss each other.

However, a viral story took a place in the national zoo in Washington DC, in which a female gorilla gave birth to a baby boy and was seen to shower the little one with soft kisses

While the action in itself is sweet and surprising to hear, considering the motherly instinct of a gorilla, it is believed by many that she was indeed using her lips to groom the newborn, throughout his body, which seemed like kissing.

In Summary – Are Gorillas Friendly?

Are gorillas friendly? Yes, gorillas are friendly in a lot of different ways. In the context of humans, gorillas would go above and beyond to protect the person it has a positive relationship. These gentle giants show signs of compassion and friendliness, and they also express pain and sorrow in their own way.

However, like any other wild animal, gorillas can be dangerous, and they are known to display aggression when they feel endangered or cornered.

If you ever get the chance to travel to Africa and visit gorillas, you should always keep in mind that these primates are powerful animals, and despite their docile nature, you should never put them under threat.

Thank you for reading. If you liked this post, here’s a recommendation of another popular read: Are Wolves Friendly?