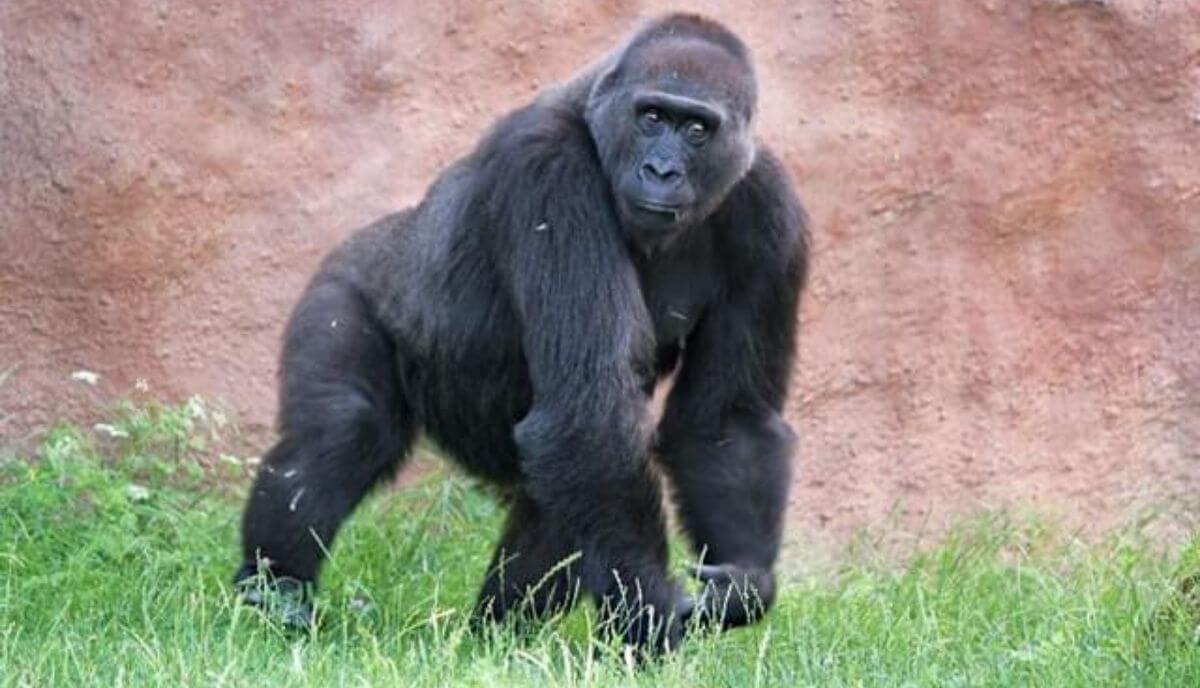 They are buffed, strong, and intimidating. A gorilla would easily win a fight against almost any opponent by simply making an appearance.

There are four subspecies of these powerful primates, and if you wonder which is the strongest gorilla species, you are in the right place.

In this article: all four subspecies of gorillas will be ranked from the weakest to the strongest.

Gorillas are great apes and our closely related cousins, sharing about 98% DNA with us.

A group of gorillas is called a troop; Troops have 2 – 30 members; 1 dominant male, a couple of female mates, infants, other closely related relatives, and sometimes unrelated members.

In all gorilla subspecies, a dominant male often called a silverback because of the saddle of grey hair on its back, manages the troop. They are in charge of keeping the troop safe, mating with the females, and decision-making.

Though similar in socialization and appearance, some physical traits and preferences set some individuals apart.

Cross River gorillas are a subspecies of the Western gorilla. They reside on the border between Cameroon and Nigerian along the Cross River. In 1904, Paul Matschie, a mammalian taxonomist, listed the Cross river gorillas as a separate species.

Cross River gorillas, like most primates, exhibit sexual dimorphism. Male Cross river gorillas are bigger and much taller than females.

As they age, their back area slowly develops into a bare grey area which earns them the name ‘silverback.’

Thanks to their diverse herbivorous diets, Cross River gorillas are remarkably healthy and muscular gorillas that possess immense raw strength.

Living in the rainforest where specific food scarcity equals a change in season, the food combination of Cross River gorillas is very nutritious. They mainly eat fruits.

But in months or seasons leading to fruit scarcity, their diet will change to accommodate herbs, barks of trees, and much more nutritious vegetation.

Cross River gorillas are naturally not aggressive towards humans. Their greatest threat, apart from diseases and deforestation, is poachers.

Faced with these kinds of humans, Cross River gorillas show a weak defense of hauling stones or grass at the intruders. But for interactions not extremely dangerous, these gentle apes would retreat rather than fight.

Related: Are Gorillas Dangerous to Humans?

At number 3 is our survivor gorillas, the mountain gorillas. This specie of gorillas is only about 1,000 in the world, smaller than their brothers, Eastern lowland Gorillas.

But they’ve beaten all odds to increase their numbers. Mountain gorillas are native to the Democratic Republic of Congo, Uganda, and Rwanda – areas with extreme civil unrest.

They’ve had to survive deforestation, refuges of the war invading their space, poachers, diseases like Ebola, and climate change.

The IUCN once classified Mountain gorillas as a critically endangered species. But over thirty years now, their number has increased. Currently, they are under the endangered class.

As they are survivors, mountain gorillas are also great warriors – if they choose to. Mountain gorillas weigh on average 342 pounds and stand 5 ft 7 in tall. Their arm length spans about 7 ft 7 in wide.

They have the thickest fur of all gorilla subspecies, which insulates heat and is handy for survival as they are pushed further up the mountains.

Mountain gorillas have a massive skull that houses powerful jaws and enormous teeth. These features are used to chew hard barks and plants. But in combat, they can be lethal.

Gorillas show little or no aggression towards humans. But in a fight to establish dominance, Mountain gorillas can be aggressive.

In the face of opposition, Mountain gorillas will, first of all, display their power and strength. They will charge, yell, roar, and beat their chest to warn their opponent.

However, if their opponents still insist, then a deadly fight will ensue that will leave at least one of them brutally injured. Mountain gorillas use their muscular arms to pound on their opponent. They will also use their big teeth and jaws to bite their opponent.

Mountain gorillas are primarily herbivorous; they eat barks of trees, fruits, berries, vegetation, and an insignificant amount of invertebrates.

The dense montane forest of the Democratic Republic of Congo is home to the fastest declining population of all subspecies of gorillas, the Eastern lowland gorilla.

Eastern lowland gorillas are the largest subspecies of gorillas. Compared to other subspecies, they have larger hands, bigger bodies, short hair, a bare face, chest, hands, and feet.

Eastern gorillas weigh about 450 – 500 pounds and are 5 – 6 feet tall. These giants are the second strongest gorilla subspecies, and part from their height, they have large teeth, jaws, and long arms.

However, like other gorillas, eastern gorillas are very peaceful animals. But their strength is demonstrated when foraging for food and eating.

An Eastern lowland gorilla is capable of ripping apart a banana tree like it is a twig. Their large teeth and powerful jaws are used for chewing shrubs, tough leaves, or other vegetation.

In the world, these gorillas have a variety of food options because they live in thick rainforests. They are traditional herbivores, but sometimes they will also eat insects like termites and ants for a change. Primarily, they prefer fruits, berries, nuts, shrubs, and herbs.

Conservation efforts were made to conserve and elevate the population of these fast-disappearing species, but limited access due to the republic’s conflict has somewhat thwarted these plans.

However, little effort is still made. Hopefully, these peace-loving cousins of ours will be saved.

You May Also Like: Strongest Eagles in the World

There is a lot of hype surrounding the subspecies at number one, and it has most likely given you the wrestling, UFO, Gym freak vibe. If you haven’t any idea yet, we are talking about none other than the western lowland gorillas.

Western lowland gorillas are the smallest subspecies. So you wonder – how are they the strongest gorillas? A lot of things set them apart.

The shape of the Western lowland gorilla’s skull is unlike any of the other subspecies; the large bone crest at the top and back of their skull gives it a conical shape.

Its large cone-shaped skull houses the massive bone structure to support the powerful movements of the gorilla’s teeth and jaw. Compared to a human’s miserly 162 PSI bite force, a Western low land gorilla has a biting power of about 1300 PSI – one of the greatest of all animals on earth!

An adult male western lowland gorilla standing erect is about 6 feet tall – the ideal height for an average human model. Their arm span is about 8 feet long.

They weigh about 300 pounds and can reach a maximum of 500 pounds.

As males emerge from the juvenile stage into adulthood, they gradually grow a saddle of grey hair on their back that may extend to their thighs. Females, however, are on a smaller scale.

Though not physically tested, studies of the bone and effortless lifting and shredding of material by Western lowland gorillas suggest these gorillas can lift about 4,000 pounds.

However, with their incredible strength, these gorillas species are not dangerous to humans and are usually peaceful primates.

In the wild, even when faced with an intruder – another silverback – the adult Western lowland gorilla in charge would yell, beat its chest, and charge past him, then start an outright fight if the intruder still insist.

As strong as Western gorillas are, you would be surprised their diet is strictly herbivorous – they may eat invertebrates too. Western lowland gorillas eat about 45 pounds worth of food per day. Their diet includes fruits, berries, herbs, shrubs, barks.

They are the most widespread of all the other subspecies covering a vast area of 270,000 square miles stretching from parts of West Africa to central Africa – the democratic Republic of Congo, Gabon, Cameron, equatorial guinea, and the Republic of Congo.

Read Also: Gorilla vs Hippo – Who Would Win?