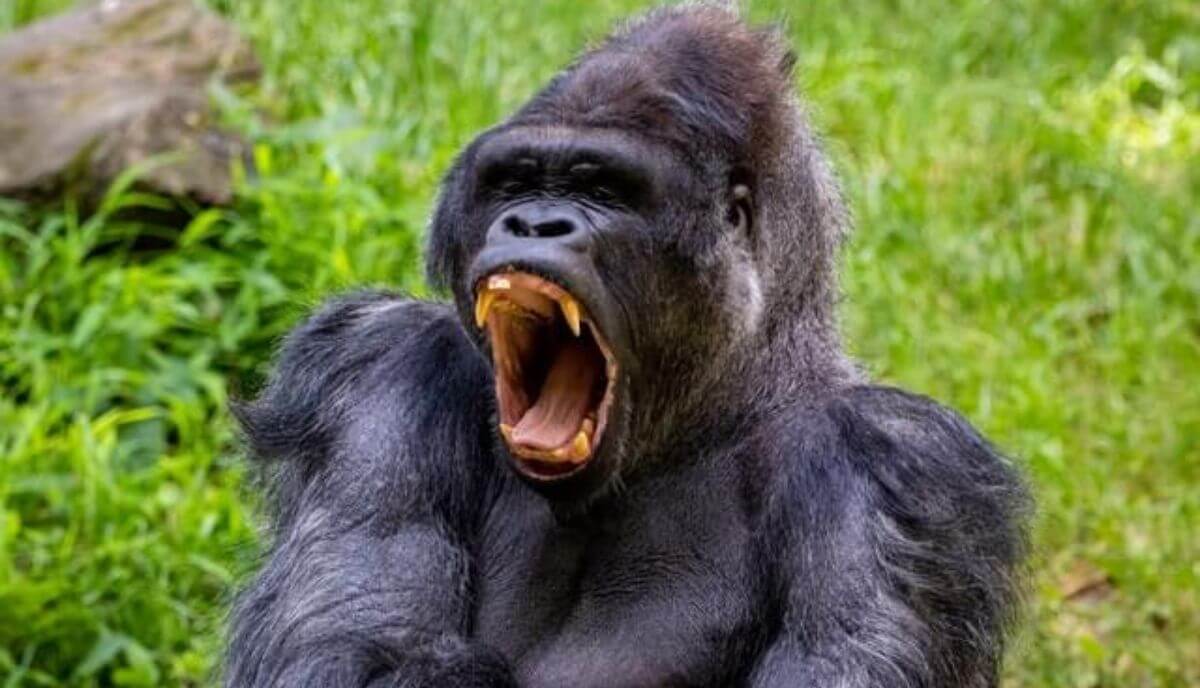 If you are planning on a trek to meet the great apes face-to-face, the first question on your mind would be, are gorillas dangerous? Do they attack humans? Well, let’s find out!

Gorillas are not particularly dangerous to humans, as they are known to be non-aggressive and peaceful apes. However, gorillas may become dangerous when they or their families are put on a threat. There have been few cases of gorilla attacks on humans; yet, these situations happened because the animal was previously provoked or intimidated.

Gorillas are often called “gentle giants” because they are indeed gentle and quite shy. Known to display a multitude of human-like behaviors, including showing emotions, these animals, just like humans, do become dangerous at times.

During those instances when they are made to feel uneasy, threatened, vulnerable, or if they sense danger, they prove to be dangerous. There are certain circumstances that can instantly trigger the great apes; for instance, when they feel their family might be in trouble, or when they are taken by complete surprise by a human’s actions.

Known as the largest primates on the face of the earth, gorillas are very social animals and live in groups, which are referred to as gorilla families. It could be because they are family-oriented, much like humans, that they choose to be left in peace before they get agitated and pose a threat.

Unless and until they are provoked, gorillas typically don’t charge. If and when they are disturbed and get agitated, they start showing signs of strength and warning to let the intruder know that they want to be left alone. And when their warning signs don’t work, they may even choose to attack.

It is common for gorillas to fight among themselves, but them being dangerous to humans is a rare occurrence.

Related: How Dangerous Are Baboons?

Gorillas are typically non-aggressive and friendly primates. However, as mentioned, they can get very aggressive and violent towards humans and other animals when threatened. Gorillas show their aggression mainly among themselves; for instance, a silverback – an adult male gorilla who is considered to be the leader of a gorilla family, can get aggressive towards another leader from a different family when competing for females.

Gorillas are remarkable animals that display peaceful behavior most of the time. They love spending a majority of their time relaxing, resting, and communicating with each other, all of which happen around a group’s silverback.

Luckily gorillas are kind and gentle creatures; considering their size, strength, and other powerful characteristics, they could be one of the most dangerous animals on the planet.

The silverbacks are capable of causing fatal injuries using their long and strong canines. When two gorilla families come in contact, the silverbacks of both those groups fight, possibly to take over the other group. When this happens, there are incidents where the dominant silverback kills the baby gorillas in the group they just took over.

As for humans, it is often the gorilla males who become aggressive to people, which happens when they sense a threat to their family. For this reason, in national parks, gorillas are slowly habituated to people in order to be accepted as visitors by the big beasts.

Earlier, people living near gorilla habitats used to hunt them down in fear that the animals could harm them and their families.

But, this mindset was then changed by Dian Fossey, an American primatologist, who tirelessly worked towards protecting these animals and showed people how polite and gentle gorillas can be.

Gorillas do not attack humans unless they are previously put into danger. There have been only a few recorded cases of gorilla attacks on people in recent history. But it is important to note that these attacks have happened as an act of gorilla’s self-defense.

Apart from being shy, calm, and gentle, gorillas are wild animals, and like any other wild creatures, they can get aggressive and dangerous. But, when it comes to gorilla attacks on humans, the incidents are extremely rare.

Again, just like humans, these primates do not attack unless they are provoked.

As mentioned earlier, before the intervention of Dian Fossey, gorillas were widely pictured as violent beasts that could kill a person in an instant. But, this perspective was busted by Fossey. It was her constant efforts that revealed that these animals, despite their huge size and fearful looks are in fact gentle primates.

Before attacking anyone, gorillas try their best to avoid any conflict, which they practice by displaying threat behaviors to make their opposition know that they want to be left alone and not intruded in any way. The threat behaviors that these gentle giants use to intimidate their threat without attacking are:

When humans understand and respect these signs and leave a gorilla alone, the threat ends there. But, if these threat displays don’t seem to work, there is every chance that the gorilla may attack.

No, gorillas don’t eat humans. Even though attacks on humans can happen on rare occasions, they, however, DO NOT eat humans. Gorillas do not feed on meat, they are mainly herbivorous animals that eat vegetation, and their diet usually includes fruits, leaves, bamboo shoots, roots, and stems.

Some gorillas, like the Western lowland variety, are also known to supplement their diet with ants, termites, and other insects.

In fact, more than 85% of gorillas’ diet comprises plant-based food, leaves, stems, and bamboo shoots. The remaining percentage includes small amounts of flowers, roots, fruits, and insects. Their intake of fruits is very less because of the high elevation of their natural environment.

FAQs on How Dangerous Are Gorillas?

Now that you know gorillas can be dangerous when provoked, we will be addressing a couple of frequently asked questions on how dangerous gorillas are:

Yes, gorillas do bite when they fight each other. They can deliver a powerful bite with their large canines, and one bite from a gorilla is estimated to be 1,300 pounds per square inch, which is way higher when compared to lions. In fact, gorillas have the strongest bite of any ape.

Even though they do not eat meat, gorillas have forceful jaws, which helps them with bitting through heavy twigs and bark. The secret of their strong bite lies in their large bodies and powerful neck muscles.

How to Survive a Gorilla Attack?

As discussed, gorillas may attack when they feel threatened or if they sense danger. If you fail to understand a gorilla’s threat display, you have no other option but to try and survive the attack.

Here is what you should do:

In summary, gorillas are highly cautious and reserved when they come across humans. However, they can be dangerous to people if they feel threatened, insecure, or surprised. During such circumstances, these apes can become violent and attack their intruders.

Even though gorillas do not pose an active threat to humans, it is better to be prepared and know how to stay on the safe side in case of encounters. Keeping yourself at safe distance and not trying to make gorillas feel scared will almost completely reduce the risk of being attacked.

And that’s all. I hope the “are gorillas dangerous” article was helpful, and If you ever come to visit these Africa’s giants, you now have a better understanding of their behavior.

If you liked this article, here’s a recommendation of a similar read: Are Penguins Dangerous to Humans?