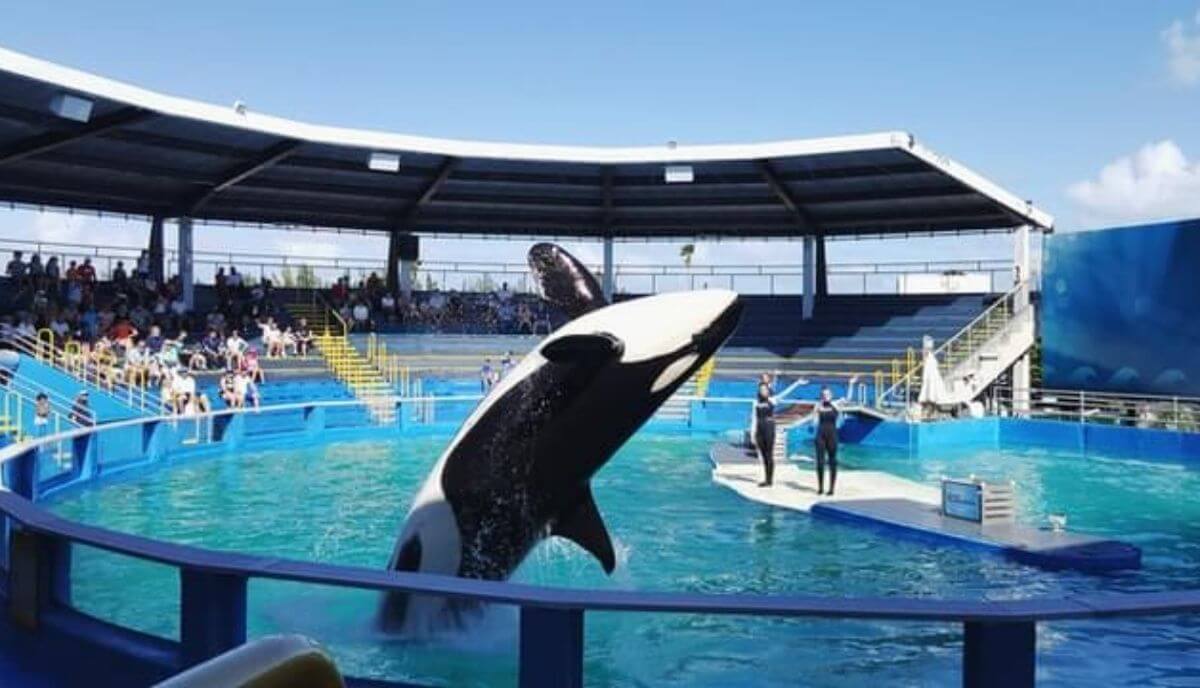 Orcas, also known as killer whales, are among the most charismatic and fascinating creatures. These powerful apex predators are highly intelligent and social, using complex hunting strategies to take down sea lions, humpback whales, and even great white sharks.

By being superior aquatic predators, many are curious to know, are orcas friendly to humans?

Orcas are friendly animals, and they do not pose an active threat to humans; in fact, they seem to enjoy human interaction. However, orcas are still large wild animals, and they can hurt a person accidentally. So despite their friendly personalities, it is advised not to approach orcas.

One would think otherwise with a name like “killer whale,” but the name is actually a little misleading.

The orca was initially called “killer of whales” (not humans), which became shortened to “killer whale” over time.  So, they may not be as friendly towards other whales.

Orcas are highly social creatures and live in close-knit groups or pods. They form extremely deep and complex social bonds, just like humans.

And like us, they rely on these relationships for their well-being.

Outside of hunting for food, their lives revolve around each other, and socialization, bonding, and play make up most of their day.

Orcas are highly empathetic and will readily risk their lives to protect one another. They are known to mourn their dead and even gather in what resembles a funeral ritual when one of them dies.

Different populations of orcas also have their cultural behaviors and dialects and perform greeting rituals when they encounter each other in the wild.

They are rarely aggressive with one another or anyone else, apart from when they hunt.

Encounters between humans and wild orcas have never resulted in harm coming to humans.

While orcas seem to like humans, there are many reasons why they shouldn’t. We are their most prominent and perhaps the only significant threat. Historically, humans have hunted orcas for their meat, as well as to reduce competition for fish.

Overfishing has created massive problems for some populations of killer whales, resulting in them being listed as endangered in certain regions.

Humans also routinely capture and kidnap orca calves, tearing them away from their families to be kept in aquariums or parks. Despite this, orcas have never attacked humans in the wild.

In fact, they have frequently been documented deliberately approaching humans either swimming, kayaking, or in boats. During such encounters, orcas seem to be very curious and enjoy trying to figure us out.

Orcas have been known to play with humans too, either swimming alongside and around them or bringing “toys” to play with. They frequently swim after boats, playing and playfully chasing them in their wake.

There are cases in which a wild orca has recognized a particular human and has developed a friendship with them over time, returning to the same place every day to greet them.

Residents of a coastal Alaskan village have also reported attempts by a pod of orcas to join in a snowball fight. Upon seeing children throwing snowballs, the orcas broke off a piece of drift ice and began tossing it around in the air.

Do Orcas Save Humans?

While there are very few (if any) documented cases of orcas saving unfamiliar humans from dangerous situations, there are cases of this happening with humans the orcas know. Orcas have been known to hunt cooperatively with whalers, helping shepherd the hunted whales towards the harpoons.

In return, the whalers give them their favorite parts of the whale, such as the tongue and lips.

There are cases where whalers have found themselves capsized and in danger of drowning, and their orca colleagues have rescued them.

One such case happened in Eden, Australia, when a team of whalers fell into shark-infested waters after their boat capsized.

A pod of orcas, led by a male known as Old Tom, protected them from the sharks and kept them afloat until help came.

Why Do Orcas Not Attack Humans?

Even though orcas are mighty apex predators easily capable of killing a human, there is no record of this happening in the wild. There are a few theories on why orcas do not attack humans, the most obvious being that they recognize we are not part of their regular diet.

But is this reason enough? Other apex predators, such as sharks, very occasionally mistake humans for seals, resulting in an attack.

While this is usually limited to one (huge) bite, there are cases in which the shark has come back for more, despite knowing the victim is not a seal.

Yet, in the one or two suspected cases of mistaken identity during an orca hunt, the orca aborted the chase as soon as it realized its prey was human, without causing injury.

Orcas are highly intelligent, empathetic creatures, capable of forming culture, regional dialects, and social rituals. Experts believe hunting humans is a kind of cultural taboo among orcas, who recognize us as intelligent, sentient beings like themselves.

This being said, orcas have been known to attack, or even kill, humans in captivity, but not in cold blood.

Unfortunately, humans are less respectful of our aquatic neighbors and kidnap orca calves to be sold to marine parks and raised for our entertainment.

Captive orcas live sad lives in which they cannot experience freedom, hunt, or form the normal social bonds essential to their well-being.

It is believed that the distress this causes builds up, leaving these sensitive animals desperate and damaged, and very rarely results in them lashing out at their captors.

Is it Safe to Swim With Orcas?

The sensible answer here is no; it is not safe to swim with orcas. While orcas are not dangerous to humans, they remain wild animals and enormous predators. Even a curious or playful orca may be capable of harming a human by accident, though there is no documented case.

To enter the water in a deliberate attempt to swim with wild orcas would probably not result in any harm coming to you, but it is tempting fate.

More importantly, if anything were to happen, by accident or otherwise, the repercussions may be severe. While orcas are considered gentle giants, we have no need to fear; we remain their biggest threat.

If their reputation suddenly became bloodier, they may be afforded even less respect and empathy than they already are.

There are numerous instances of wild orcas approaching swimmers; however, in these cases, the orcas seem to be very friendly and curious and even attempt to play or interact with the human, sometimes bringing seaweed or other objects to show them.

Mothers have been known to bring their babies to see humans, almost like an educational visit. However, they rarely make physical contact, apparently treating the human with a kind of respect or reverence.

It is also apparent that they swim very gently around humans, perhaps understanding that we are weak in water and cannot handle rough environments.

Orcas are remarkable social and friendly creatures. They are highly intelligent, capable of complex emotions and thought, and experience empathy, both towards each other and towards humans. Despite their well-earned reputation as fearsome hunters, orcas are not cold-blooded killers, nor are they dangerous to humans.

In short, orcas are not only friendly but also curious, playful, and even affectionate towards humans, even when we don’t necessarily deserve it.

However, this doesn’t mean you should try to approach a wild orca. They are huge wild animals equipped with deadly teeth, and even though they do not pose a direct threat to humans, they can hurt them by accident.

With this, we have concluded the “are orcas friendly to humans?” article. Thank you for reading!

If you like this type of article, here’s another recommended read: Are Penguins Friendly?