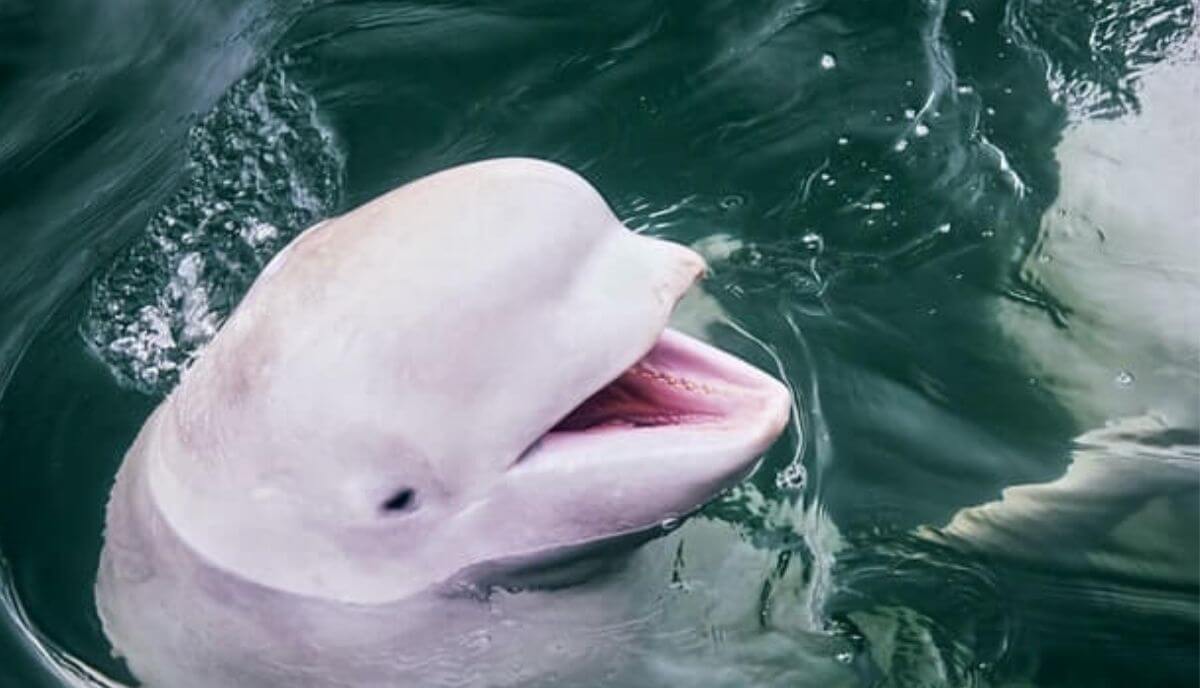 The first time I saw beluga whales, I was mind blown. In comparison to sharks and dolphins, they have a silky white color – a rare color for a large marine mammal.

Beluga whales have these innocent-looking features. They have the aura of friendly dolphins.

Yes, beluga whales are very friendly animals, and they are known to be amiable to humans. These gentle marine creatures typically live in groups of 10 individuals, but they also socialize with other belugas outside of their family unit.

Beluga whales are large and powerful animals, and they can be quite dangerous if harassed. However, beluga whales would only act aggressively in self-defense. As long as humans do not provoke them, beluga whales do not pose an active threat to people.

If you see belugas opening their mouths, it is a sign of aggression.

Even though they are carnivores, beluga whales do not hunt humans, so there is no danger of them seeing you as a food source. The only risk comes in case the animal is scared, harassed, or put in some kind of threat.

Despite their friendly nature, beluga whales are still wild animals, and like with every other wild creature, you should be careful, as they can be dangerous.

The best thing to do in order to be on the safe side is not to bother or scare the beluga. Keeping yourself in the distance and not trying to harm the animal in any way will put you 100% out of the potential damage.

Generally, beluga whales do not attack humans. However, if they feel harassed or threatened, they may aggressively retaliate in self-defense. Although beluga whales were documented to be aggressive, there are no reports that they attack any humans.

However, people are deterred from approaching beluga whales. It is mainly to avoid scaring or making the animal dependent on humans.

In reality, humans are more dangerous than the beluga whale. Human activities have been poisoning their habitat. At the same time, people have been hunting beluga whales.

Beluga whales have been spotted to be friendly with humans. They are not called “The Canaries of the sea” for nothing. Beluga whales also tend to “talk” a lot, being the most vocal type of whale.

Their friendly features and nosy attitude make people tempted to approach them. However, people need to exercise caution around these animals. It can be uncertain when beluga whales are aggressive or not.

Established as a social animal, the reasons behind this skill are interesting. Beluga whales connect and interact with other animals to coordinate, cooperate, or hang out. These interactions are described as “human-like” relationships.

These creatures are also highly intelligent and communicative. So, they continue to baffle people about why they do not intend to attack humans.

Are Beluga Whales Safe to Swim With?

Yes, you can safely swim next to beluga whales. Similar to most marine mammals, beluga whales are just curious animals, and they may approach you because you look fascinating to them.

Beluga whales do not understand personal space, so some people get surprised when these animals approach them. They can get close, sometimes touching you.

If beluga whales start touching you, do not panic. However, be careful and swim away to give some space between you. Beluga whales are huge marine animals, weighing an average of 1,400 kilograms.

Usually, swimming with beluga whales is under the strict supervision of a trainer. This experience is available in different marine theme parks.

You can also swim with beluga whales in the wild. However, it must be through an organization license to do so.

There are chances you may encounter them in the wild. If you’re not with a professional, please slowly swim away.

Can You Touch a Beluga Whale?

Technically, yes, people can touch a beluga whale. However, touching belugas is only safely done during tours with the presence of trainers or guides.

In Norway, a beluga whale is so tame that people can freely pet it. However, there was suspicion about the origin of the marine animal due to its collar.

Squishing the melon hard cannot damage the beluga’s brain. The brain is quite separated from the melon and protected by the skull. Still, people should not squish the melon for any purpose.

In this section, we are going to answer some of the popular questions regarding belugas and their behavior.

Yes, beluga whales are highly intelligent marine animals. The beluga whale has a brain twice the size of a human brain. It means that the portion of the brain involved in thinking and problem solving is highly complex.

However, one must not misinterpret that beluga whales are smarter than us. Although they have larger brains than humans, it does not equate to them being more intelligent.

Studies test their IQ and human IQ differently. Beluga whales and humans are two different organisms. So, it is not fair to compare them as there are other factors included. It includes the size of the two beings.

Their intelligence may also explain the beluga whales’ ability to communicate and socialize with other animals. Although beluga whales can’t speak human language, they are incapable of being vocal.

Beluga whales are also curious marine mammals. However, they can also act cunning in their best interest. This behavior may correlate to the fact that human activities endanger them.

Most people thought beluga whales were dumb. When in reality, they are aware and conscious of their surroundings. It then led people to hurt them and their habitat.

Unfortunately, maritime traffic caused beluga whales to get confused. It stresses the marine mammal. In turn, the beluga whales run aground to avoid the clamoring cacophony.

Beluga whales are playful marine creatures. They are seen playing with their kin or another animal, including humans. Beluga whales play by chasing each other, splashing water, and rubbing with each other. They also use random items from the sea as toys.

Their playfulness may stem from their curious nature.

A popular video of a beluga whale with two children captured the hearts of viewers for the friendly interaction. Sadly, this was not the case in this scene.

The beluga whale in the video was showing aggression. Being in a cramped tank with two kids poking its aquarium glass, the marine animal posture itself to shoo them away.

When a beluga whale is placed in unsafe captivity, it’ll likely act aggressively.

In summary, beluga whales are naturally quite friendly and curious marine animals. However, it does not mean they are sociable all the time. When threatened or stressed, beluga whales may act aggressively. It is either for them to escape the stress of the issue.

However, being large mammals, beluga whales can accidentally hurt you. So, people are warned to stay away from beluga whales, especially if visiting them in the wild.

If ever you encounter them while swimming in the open sea, make sure not to touch them. It is better to admire them from afar.

If this curious animal approaches you, please do not push them. They will not hurt you.

Thank you for reading. I hope this article was informative and fun to read.

If you liked this type of post, here’s my recommendation for another popular read: Are Bears Friendly to Humans?