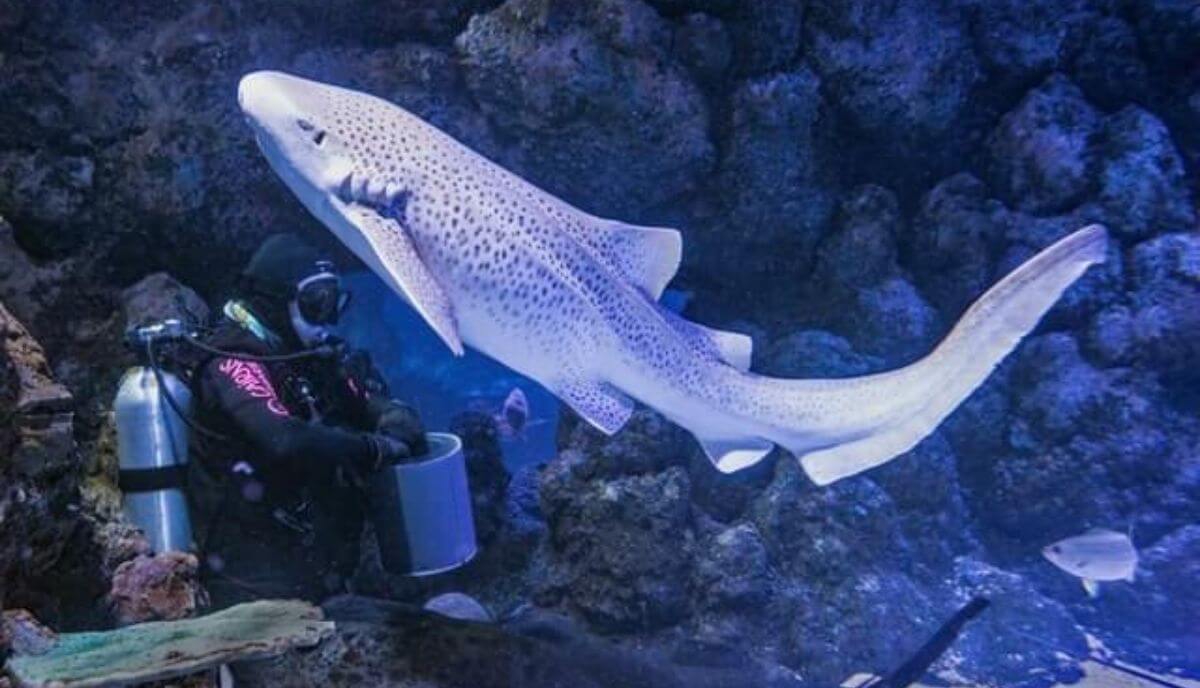 Since I was a kid, I used to be afraid of aquatic creatures, especially sharks.

And, yes, some sharks pose a threat to humans. But there are actually many more species that are harmless.

I figured that these water predators got a bad reputation mainly from stories, cartoons, and movies.

This triggered a thought (whether sharks are actually friendly to humans?) that made me write an article.

So, are sharks friendly animals? Despite their scary look, many shark species can be friendly to humans. In fact, the majority of sharks are unlikely to attack humans without any provocation, and they may even let people touch them, as you may have seen scuba divers do.

However, it cannot be said that sharks are fond of human beings, so it is not everything black and white. But, if you hear about shark attacks, only a handful of species are usually involved. Among these are bull, great white, and tiger shark.

Sharks don’t necessarily like humans since they mostly see us as other creatures in the ocean. Although sharks are incredibly smart, there has been no concrete proof to show that they like human beings. However, they don’t dislike people either since they do not see them as a direct threat or food source.

You may have seen divers going close to sharks and even petting them, making it seem that they like humans. In reality, they just don’t feel threatened by them; hence, they have no reason to attack them.

Because of this reason, sharks also feel no need to be aggressive when they are physically close to people.

It is said that many times sharks do not intentionally attack humans. This is because people are not in their primary or even secondary food source.

In most cases, attacks usually happen accidentally or because of curiosity. This is why it is rare to find sharks having eaten a person. Instead, they usually tear them apart and leave their pieces.

Sharks are highly intelligent creatures with an excellent sense of memory that can remember things for more than a year. Due to this great memory that rivals that of crows and some primates, they can potentially remember humans. This has not been proven completely, but some studies have shown that this could be possible.

One study proves that sharks have excellent memory that could potentially remember the shape of a particular human being or identify shapes.

Scientists conducted a study that used the food reward method to teach sharks how to identify different shapes, whether a triangle or square.

After this experiment, the scientists returned after 50 months to test whether the sharks remembered, and they did.

This indicates that a shark with frequent contact with a human being could remember that same person even after a few months.

Can Sharks Form Bonds with People?

Since many sharks don’t mind when humans get close and even touch them, it’s normal to be curious about whether they form bonds with people. However, sharks are not like dogs, so they do not crave or feel affection, especially for human beings. Therefore, sharks can’t create a connection with a person.

A study was carried out to determine whether sharks feel affection for the people with whom they interact. In addition, the researchers wanted to find whether sharks’ interaction with humans has any long-term effects on their natural behavior.

However, by the end of the study, it was final that the interaction of sharks and humans doesn’t have any long-term influence on their behavior.

As a result of the study, sharks and humans can’t form a bond regardless of the shark’s intelligence. This could be because sharks do not consider humans or other creatures as friends.

Can You Pet a Shark?

Even though most species are not dangerous to humans, you should not try to touch a shark. There have been instances where sharks have been seen intentionally getting close to humans to be petted, including both in the wild and in captivity. However, some shark species can interpret the outstretched hand as a threat, so it is important to be careful with sharks.

Some people say that sharks enjoy being petted, but this is probably more common in smaller sharks. These can be baby sharks or small species of sharks that may be more familiar with the human touch.

Some aquariums allow people to touch sharks in the water, and in such cases, it is important to know how to do it right. It is advised to put your hand in the water and allow the shark to come to you.

You should not move your hand around in the water since the shark may think it is some fish and go in for the kill. By keeping still, the animal should come to you.

In many cases, sharks in captivity are already familiar with the human touch. Therefore, they should easily get close enough to be touched without danger.

Slowly run your hand on the back of the shark or even the belly if it turns. Avoid scratching their body since this could be irritating to them.

FAQs on How Friendly are Sharks

In this section, we are going to answer some additional popular questions regarding shark behavior.

Sharks that are used to human interaction can display some form of affection, but it is unlikely for the wild ones. This is because sharks in the wild are not used to having human beings in their environment. Even though they may swim together, sharks hardly ever touch one another, so affection is not natural.

When scuba diving out in the ocean or sea, it is best to leave sharks alone if you come across them. They may be curious and want to get close, but it is a high risk to try and touch them.

However, sharks in the aquarium are much different from the ones in the wild. They are used to having human beings close to them, feeding, and even touching them.

This video shows a smaller shark being affectionate to the aquarium keeper.

It shows a shark that is used to having a person close to it and even enjoys being petted.

Which Shark is the Friendliest?

The leopard shark is the friendliest species in the world. It is not as cautious about humans as other species are, and they like human interaction. So it is easy to find them enjoying being petted by people, and they get close to people in the hope of being touched.

Leopard sharks can be found in shallow waters, so it is easy to spot them close to the shore.

However, don’t be alarmed if you spot one since they are almost completely harmless.

Leopard sharks mostly feed on small fish and crabs, and no human attacks have ever been reported.

In Summary – Are Sharks Friendly?

Some shark species are friendly, while others are not so much. However, many large sharks are indifferent to humans around them. One thing about most sharks is that they can be quite curious; they are usually very aware of their surroundings. This is why they tend to get close to people to find out what they are.

Sharks are not the senseless killers they have been portrayed in movies. They are intelligent and curious creatures, and since humans are not among their top prey, they hardly ever attack them.

However, like most wild animals and predators, sharks can be quite dangerous. If you ever wish to touch a shark, the best place you should do it is in public aquariums under the supervision of professionals.

Thank you for reading. Hopefully, this article was informative and fun to read. If you enjoyed this post, here’s a recommendation of another popular post: Are Giraffes Friendly?