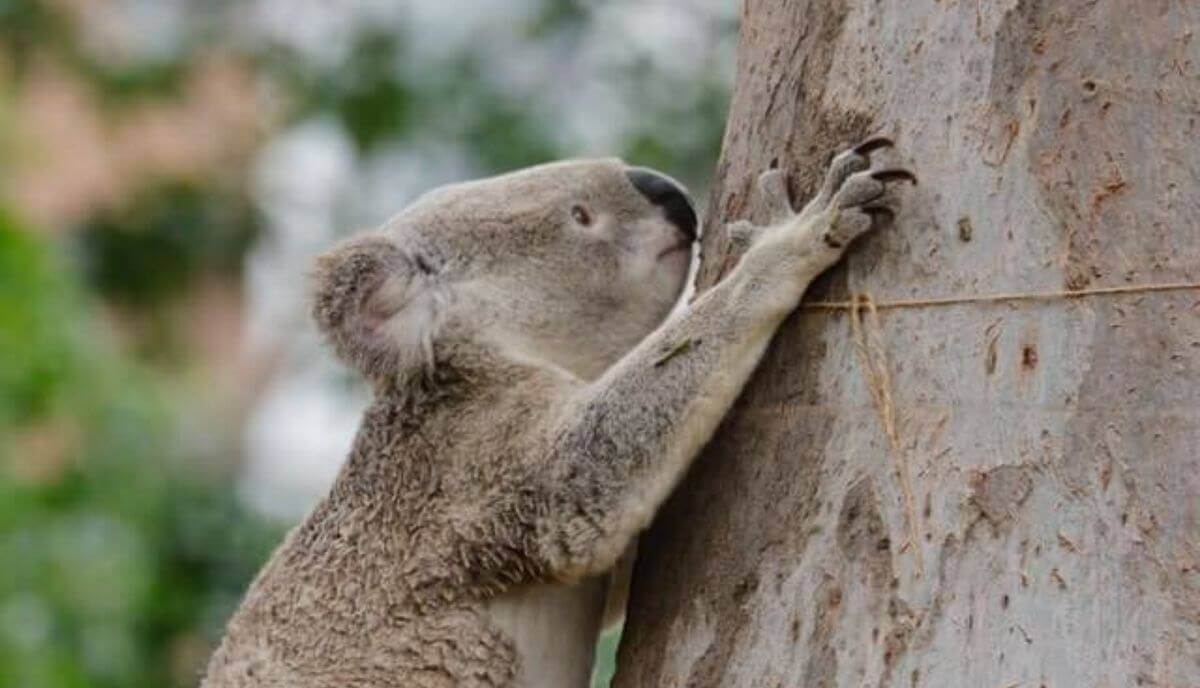 Let’s be honest, when you first time saw koalas, you’ve surely had that idea about cuddling with these marsupials.

But what’s hiding behind that cute face – are koalas dangerous, or are they cuddly and innocent as they look?

Yes, koalas can be very dangerous! Koalas are wild animals, and beneath their lovely appearance, their solitary nature is what makes them dangerous to humans. Even those koalas that are born and raised captive tend to be dangerous to people when approached by them. When koalas feel threatened, they are known to become aggressive and launch an attack.

Whenever you see a koala, on TV or in a zoo, you will naturally be allured by its cuteness. The way they sit hugging a tree or munch on their favorite eucalyptus leaves makes them look and feel like nature’s own stuffed teddy bears.

But, behind this adorable face is a dark side – koalas are not friendly animals.

When it comes to characterizing an animal as dangerous, it is normally done based on how aggressive the animal is and/or how likely they are to attack.

With koalas, they are known to be dangerous not just for their assertive nature, but also for their ability to carry and spread potential diseases.

As hard as it can be to believe, these adorable little marsupials are known to snap at times. Yes, they love to keep to themselves, snacking and snoozing, but they can turn cranky and vicious quickly when approached by humans, trying to pet or cuddle them, which can make them feel threatened or vulnerable.

Many incidents of koala attacks have been reported during different times:

Such incidents leave even wildlife experts surprised because koalas are, generally, very calm and spend around 22 hours a day sleeping. But, it is evident that these animals can become quite dangerous when they feel bothered or irritated.

Chlamydia is the most common disease affecting koalas. With at least half of wild koalas known to be infected with this disease, it also happens to be one of the reasons for the decline of the koala population.

Yes, the disease is painful for the marsupials, causing various infections and other conditions. But, what’s more, unnerving is that it can be transmitted to humans.

Though rare, yes, there are occurrences of koalas biting humans. Their jaws are extremely strong and powerful, which makes it easy for them to make a person bleed with their vigorous bite.

One example is the same incident that was discussed earlier. The South Australian woman was bit so hard by the koala, snapping its jaws onto her leg and not letting go, that she had to prise her fingers into the animal’s mouth to make it release its grip.

The bite was very painful, and the injury was deep, as explained by the victim.

Furthermore, a relatively recent study revealed that koala bite wounds can cause infections that might need antimicrobial and surgical management.

Koalas have sharp front teeth that they use to snap their favorite eucalyptus leaves for a meal; but, what you should know is that those teeth are sharp enough to cut through the soft skin of humans too.

So, if you are wondering if koalas bite, know that they do bite when they feel threatened, and the bite can cause serious injuries.

Koalas are solitary and territorial animals, and when disturbed or made to feel threatened, they can quickly become aggressive. As discussed, when koalas get violent and aggressive, they are known to chase people and try to hurt them by scratching with their talon-like claws and biting with their sharp teeth.

While everyone loves to get close to, pet, and hug a koala, studies have proven that there is a limit to how many up-close interactions a koala, even one that is born and raised in a zoo, can handle, after which they tend to display a vigilant behavior.

Once their threshold is reached, they get stressed when people continue to approach them, and become nervous. This nervousness can lead to the animals feeling vulnerable, which in turn can make them aggressive.

We should always keep in mind that wild animals as their name suggests are wild. Especially if the animal, like the koala, has a solitary nature. This means that it is against its core is to have any contact with humans or other animals.

Related: How Dangerous Are Cheetahs?

How Do Koalas Attack?

When koalas lose their cool and start to attack, they use the two most damage-causing parts of their body – their claws and their teeth.

During an act of aggression, koalas tend to use these claws to scratch and leave marks on other animals and humans, causing them to bleed.

The claws of koalas are pretty sharp and long, which they use to climb trees and grab onto branches. Their claws are so strong that they leave deep marks on trees when they climb.

It is quite similar with their teeth too. Their front teeth are razor-sharp, enabling them to easily tear down their food, which is eucalyptus leaves most of the time.

However, the sharpness of their teeth, along with their strong jaw, makes them capable of piercing through the skin of humans, causing bloody injuries and serious damage.

Koalas, by nature, are shy animals that favor being left alone. But, there are certain circumstances when koalas can become mean. One of the main reasons why koalas become violent and mean is when they feel threatened for their own safety. Also, if someone jeopardizes their personal space, koalas are likely to awaken their mean characters.

However, there have been several occasions when non provoked koalas launched an attack on dogs and people as well. Even though these marsupials are usually mild, they can sometimes become quite unpredictable.

Does that make them a mean animal? It’s hard to say. From a human perspective, a mean person is someone that does bad things intentionally.

If we look at things from that angle, we can then conclude that some koala individuals are definitely mean, while others become evil only when someone makes them be.

Koalas are supreme Australian animals. Though they are widely referred to as koala bears, they are not bears but are marsupials.

Koalas are solitary animals that prefer spending time on their own. But, similar to most other wild animals, they can get aggressive and attack when they feel threatened or vulnerable, feel a threat to their young ones, and reach their maximum threshold for stress.

So, if and when you come across a koala, it is best to leave it alone and not try to touch or pet it.

And there you have it. If someone asks you – “are koalas dangerous?” you now know the answer.

For the very end, here’s a recommendation of a similar article: Are baboons dangerous?