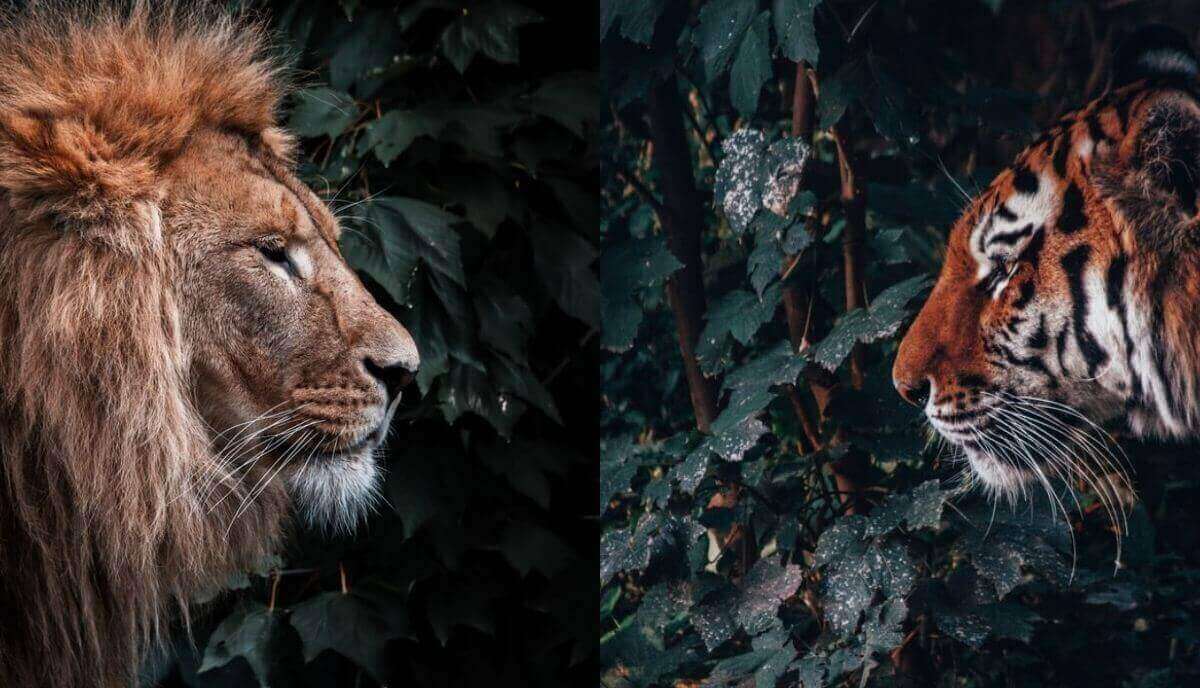 Lions and tigers are two large cats with many similarities, making it easy to confuse the two. They belong to the same family, Felidae, which translates to cats. They are also part of the same genus, Panthera, making them closely related.

However, there are many differences, including physical, which lead us to the question, are lions and tigers the same species?

Lions and tigers are not the same species, despite the many similarities between them. Lions belong to the species Panthera leo while tigers are of the species Panthera tigris. They can, however, interbreed and produce ligers and tigons. Therefore, the offspring between a male lion and a female tiger is a liger, while the offspring of a male tiger and a female lion is a tigon.

Why Are Lions and Tigers Different Species?

Even though they share the same genus (Panthera), and family (Felidae), tigers and lions are different species. And here are the main reasons:

By definition, animals of the same species can interbreed and produce fertile offspring. This is the chief reason why lions and tigers are of different species.

While they can breed, the ligers and tigons are usually sterile.

However, there was one case in 1943 when a tigon was coupled with a lion to produce a female offspring. Unfortunately, this offspring could not reproduce, which further proves that the animals are of different species.

According to scientists, female tigons and ligers may reproduce rarely, but the males are generally sterile. This case may confuse the meaning of the word species, but since the cases where the offspring breed is rare, it is safe to say that they belong to different species.

Lions and tigers live in different places and interact differently depending on the situation. For example, lions live in groups called packs, and they inhabit the savannah grasslands in places like Africa, where they live in groups.

Lions are social animals; hence, they rarely live alone unless they get separated from their pride. In addition, male lions have a distinctive mane that covers their face making them different from the male tiger.

On the other hand, tigers live in the forests in Asia, and they prefer the cool weather of these locations. They are the largest of all the cats since the males can weigh up to 660 lbs. It is rare to find a group of tigers living together since they are not social like their lion cousins.

Many tigers venture off on their own after attaining maturity and will only live close to each other during mating. However, it is possible to find females living together for much longer than male tigers.

Are Lions and Tigers Related?

While different, lions and tigers are closely related since they belong to the same family of Felidae and genus Panthera alongside leopards and jaguars. They have similar behaviors and reproduce in similar ways. Besides, they are related in terms of diet. Both tigers and lions belong to the meat-eating order called Carnivora.

Both species are made for hunting, just like their other cat family members. Physically they look similar due to their claws and sharp teeth that help them when hunting.

Lions and tigers mostly hunt by breaking the spinal cord of their prey thanks to their strong jaws and bodies. They stalk their prey before attacking and killing them and consuming the flesh immediately.

Unlike the smaller cats in this family, the lion and tiger don’t purr, but they roar. They clean themselves and others using their tongue, just like you will find in household cats.

Similarities Between Lions and Tigers

Since tigers and lions are both relatively large cats, they have as many similarities as their differences as follows.

Both lions and tigers are apex predators, which means they are hunters. They have large sharp teeth that help kill their prey by either biting into their neck or breaking their spine.

The strong jaws ensure that they can kill large hoofed animals such as deer and buffalos. The teeth also help in tearing the flesh off their prey and breaking bones.

While their jaws are strong enough to kill their prey and take care of the bulk of the job, their claws also help hunt.

They use the sharp claws when hunting to dig into the flesh of their prey. Sharp claws also assist in holding the animal in place and also tearing the flesh when feeding.

Tigers and lions are the largest of all the cats since they feed on at least 11 pounds of meat each day. The large size helps them in hunting large prey, which they can easily overpower and kill.

Moreover, when they interbreed and produce ligers and tigons, their offspring become even more significant than the tigers and lions.

Both tigers and lions mostly hunt at night when they have the advantage of the cover of darkness. This is because they have excellent night vision, which they use to spot their prey and attack them. Most of them cannot see very well at night, so the tigers and lions have an advantage.

Yet, this depends on the availability of prey for them to hunt. In cases when they are hungry, they may both hunt and eat during the day. They, however, do this carefully since they risk being attacked by other hunters such as hyenas which can overpower them if in large numbers.

Top of the food chain

The two animals are at the top of their food chains since they don’t fear any other animal. Therefore, they are only in danger when hunting, especially the horned prey such as the buffalo.

The target can injure lions and tigers when protecting themselves, which is the major threat they face. The only other risk is when they attack man’s livestock; otherwise, no animal intentionally hunts them.

In Summary – Are Lions and Tigers the Same Species?

And that is it, I hope I’ve helped boost your big cat knowledge by providing you the answer to the question – ‘are lions and tigers the same species’?