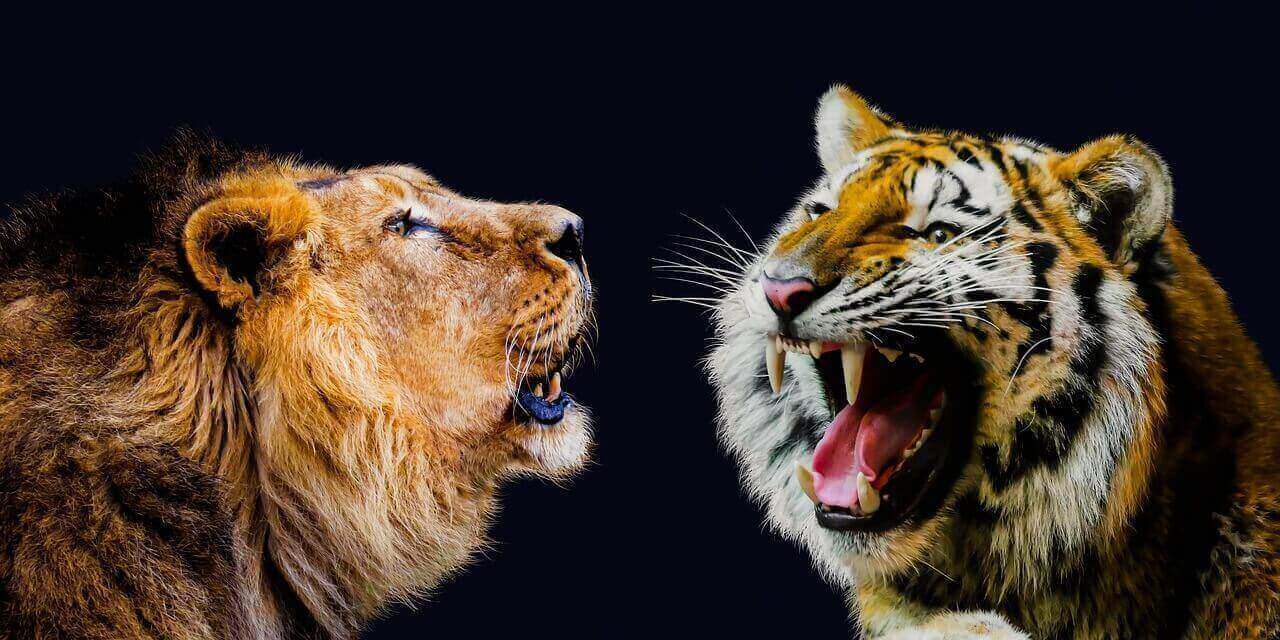 A comparison between tigers and lions has been discussed for ages. Who is bigger? Who would win in a fight: a tiger or a lion? And many other questions.

Do lions and tigers live together?

Throughout history, these big cats used to live together in the Eurasian region. Asiatic lions and Bengal tigers were two species that live and compete in the same territories in the wild.

However, there are no recordings from back then, yet, it is believed that these animals were big competitors.

You may wonder why? They come from the same family, why can’t they live in peace? Simple because their primary predatory characteristics do not allow peaceful coexistence.

Firstly, both lions and tigers hunt large herbivores animals. So, they compete for food. Secondly, both are aggressive and territorial. Which very likely led to frequent and intense clashes.

However, today there is no place in the world where lions and tigers live together in the same territory, except in captivity.

Can lions and tigers get along in captivity?

When it comes to life in captivity, things can be completely opposite. Lions and tigers have been successfully matched and kept together in different zoos around the world.

Big cats in captivity are generally known for adopting different species – and take care of them like they are their babies.

The difference we note in captivity, compared to life in wildness, is that animals grew up together. Being together as cubs make different species get along much easier. They were familiar with one another from their early days, and because of that, they tend to develop a good relationship.

Yet, the video below is not something that often happens among animals, and it might be the most fascinating story in the animal kingdom.

Baloo the bear, Leo the lion, and Shere Khan, are the trio who grew together after being saved from a drug lord who kept them in his basement. They were only a few months old and suffered many injuries before the police have found them.

The BLT (as they are known) since being rescued wanted to stay together and showed unusual friendship among each other.

When they were brought to the sanctuary Noah’s Ark, the BLT was at first kept separately. The founder of the sanctuary thought it was better if they separate the animals. Since they are all apex predators, and that they could possibly injure one another.

Yet, animals cried every time they weren’t together. So sanctuary staff members decided to keep all three of them together, and since then, they live together as a family. A very unusual but happy family.

This story is truly remarkable with a happy ending. But there were more than a few times in which captivity lions and tigers had intense fights. We’ll come back to this in a minute.

Are lions and tigers in the same family?

Even though they come from the same family called Felidae – lions and tigers are not the same species.

Yet, if we go back in time, lions and tigers share a very close ancestor. Presumably only one ancestor. Because of this reason, these big cats can interbreed, which results in hybrid species called liger and tigon. However, babies of cross-breeding tigers and lions often end up with the wrong genetics.

Despite the fact they share a lot of genetics, these big cats also have quite different behaviors and lifestyles, as we mentioned earlier.

When it comes to physical appearance, they are quite obvious. Tigers are known for the black stripes on their bodies, while lions do not have stripes. Male lions have manes, whereas tigers don’t have manes.

Physical characteristics are also notable. Tigers are usually heavier and have much stronger hind legs than lions. A male tiger can weigh as much as 750 lbs. On the flip side, a lion can weigh up to 450 lbs.

Lions are well-known for their laziness. They usually rely on lionesses that are most of the time the ones that hunt. Hence, their survival in the wild is easier, in contrast to tigers.

Tigers are loners, and they hunt, fight, and strive for survival on their own. Consequently, this kind of solitary lifestyle likely influenced the tiger’s extra intelligence, agility, and strength.

In general, tigers are more dominant compared to lions. Even when their genes mix, tiger genes are more prominent.

Do lions and tigers fight?

One of the last incidents occurred in Turkey, where a tiger entered inside a lion’s cage and killed his cousin. The tiger passed through the opening in the cage and cut open the lion by its neck artery, who later bleed to death.

However, there are also scenarios in which lions grouped up and inflicted fatal injuries to the tiger.

In conclusion, lions and tigers are very similar, yet very different. Back in the time, these big cats used to share the same habitat. Due to their fierce predatory instincts: lions and tigers didn’t get along in any way. In captivity, on the other side, they tend to get along if they were kept together since birth.