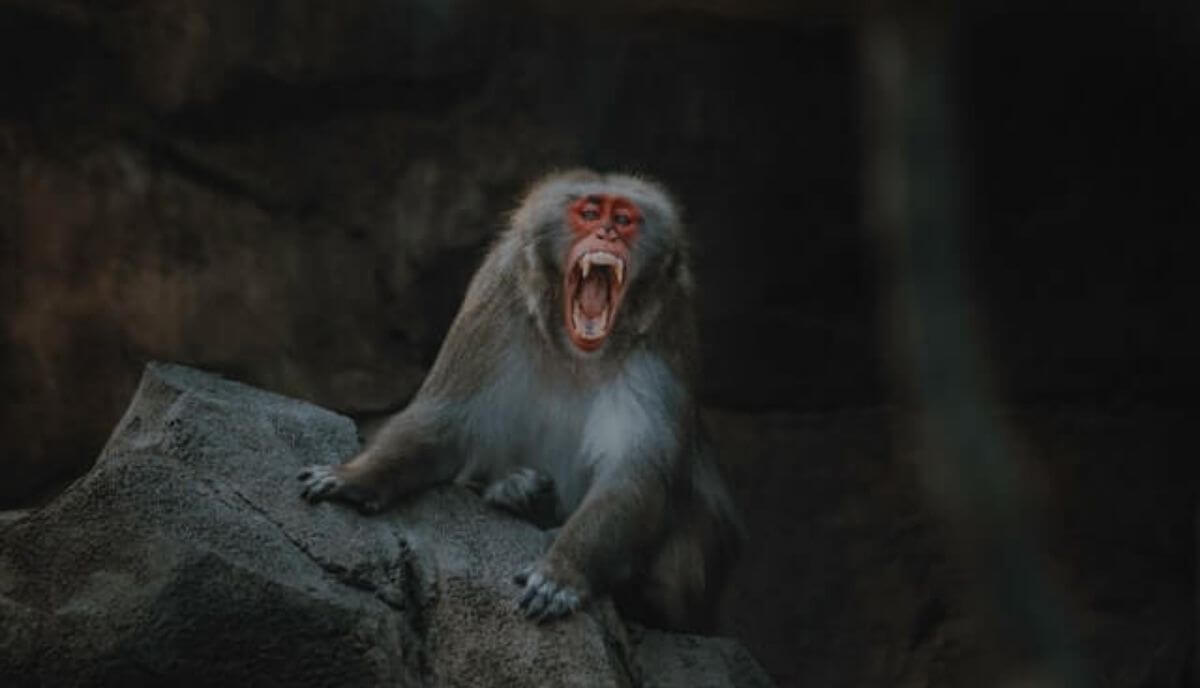 Heavy and strong, baboons are the largest monkeys in the world. Which further raises the question – Are baboons dangerous? Do baboons attack humans?

Even though baboons normally do not display aggressive behavior towards humans, they can potentially be dangerous, as they are equipped with sharp claws and dogtooth. Attacks on humans are rare, and they are usually associated with self-defense. However, there have been instances where baboons invaded tourists and people’s homes in Africa to steal food.

How Dangerous Are Baboons?

Full adult baboons can grow up to 40 inches, and even though baboons’ size is a fraction of that of humans, these monkeys can potentially be dangerous like every other wild creature.

Baboon strength and their built-in features are to be able to climb trees, jump off of long rocks, and be able to adapt to different terrains. However, the real strength of baboons lies in their groups. Baboons live in groups known as troops that count up to 300 members.

Yet, besides the strength in numbers, here are some of the main reasons why these monkeys can be potentially dangerous:

How do I stay safe?

You really don’t want to bother baboons. Irritating, cornering them, or making them feel uncomfortable in any way is a no-no. If you want to stay in a safe zone, you should not trigger their inner aggression.

However, baboons often target homes and shelter areas in search of food as well. They are what you can call a scavenger for food. Their intelligence and instinct to steal food for survival make them very unpredictable.

So, if you happen to be living near the wilderness or you are a tourist, make sure you keep your food protected at all times.

All in all, these baboons have quite a lot of traits that you would definitely need to know of. However, as mentioned earlier, they generally aren’t hostile if you don’t trigger them by cornering them or threatening their young or other troop members.

Baboons commonly display non-aggressive behavior, except when they feel threatened, vulnerable, or are provoked. During such circumstances, they may become aggressive and act to protect their young and their troop. This is why it is recommended to maintain your boundaries when you come face-to-face with these primates.

Baboons live in large family groups called troops, which means if you spot a baboon, chances are high that there are around 50 family members very nearby.

The alpha male of a troop, or even other large male baboons, often exhibit brave actions to keep humans away from their family and the rest of the troop. But, they don’t necessarily attack unless you have something they need, which is mostly food, or you provoke them.

When a baboon feels threatened or vulnerable, it might display the following actions:

Knowing these signs enables you to understand and respect the animal’s boundaries, which in turn can eliminate potential conflicts.

Baboons don’t really attack humans and they don’t see them as a source of food. They just attack the area in which they deem it feasible for food. So if you live near the wilderness, baboons would just come in to get some food and run away. They don’t actually go after humans.

As with many other animal conflicts with humans, baboon-human conflicts also take place mainly due to the destruction of crops. Primates are known to cause heavy damage to exotic trees, which is done by stripping away bark.

Baboons, specifically, are experts at raiding food crops. From wheat stems to tobacco, they chew on almost any food source they can find. They are also known to raid food directly from tables occupied by tourists and also gardens, causing much nuisance.

Another form of conflict that baboons have with humans is by attacking domestic animals. Unlike major predators like lions and leopards, baboons attack during the day and kill small livestock like sheep and goats.

As a result of such conflicts, it is humans that have resorted to violence, and not baboons. There have been several reports on baboons being shot and killed by homeowners, farmers, and others, for the reasons mentioned above. On the other hand, the incidents of baboons attacking humans are minimal.

Even though baboon attacks are extremely rare, you still need to follow only a few simple precautions when you encounter one:

What Are Baboons Afraid of?

Baboons are afraid of humans and other wild animals, especially predators like lions, cheetahs, leopards, and snakes. They see humans as possible threats due to the rising incidents of baboons being hunted by humans for different reasons.

Though large male baboons put forth a brave face and act to intimidate the human in front of them, they understand that humans are a threat and prefer to stay away. Since baboons are known as pest species, due to their crop-damaging behavior, they are widely hunted down by humans. Furthermore, the primates are also hunted for their skin.

It is important to remember that baboons can easily and excellently read the body language of humans. If you seem insecure or afraid, they can sense your fear in an instant and they take the upper hand. During such circumstances, baboons can become aggressive and any attempt you make in chasing them away can end up unsuccessful.

Summing Up – Are Baboons Dangerous?

Baboons are seldom dangerous to humans; however, they are known to threaten humans, especially when they are on the hunt for food. These wild animals have been recorded to have assaulted humans only when they feel vulnerable and threatened, and not otherwise. Most encounters between baboons and humans happen in pertinence to food.

So, all in all, there must be a proper analysis of the wild animal before facing it. Similar is the case with Baboons. To fend off a baboon, you must hide your food in order to prevent an invasion.

Even though they are not dangerous, still, if you plan your trip to Africa, it is better to be prepared and know how to stay safe from these animals because they can be very annoying creatures.

Thank you for reading the post, “Are baboons dangerous?”. We would like to recommend you a similar article: Are Orangutans Dangerous?