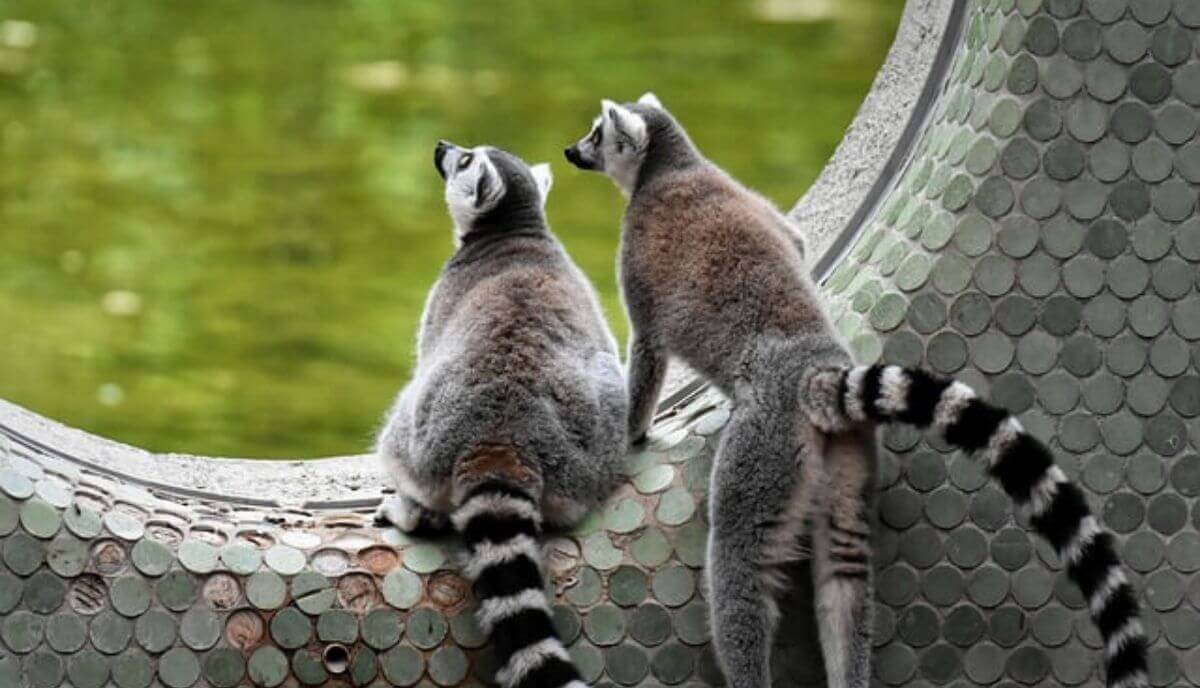 Nature is the world’s first scientist! Look around, and you will find wonderful creatures with all kinds of adoptions. One of those adaptations is the tail.

Animals with tails come in all kinds of shapes, sizes, and colors. The tail has different functions, while some of the most usual ones include protection, balance, temperature regulation, matting rituals, communication, and territory marking.

The following is a list of animals with tails (long & short):

This magnificent beast has one of the longest tails Mother Nature can provide. What gives this shark its name is its elongated caudal fin. There are four species of thresher sharks, and the largest of them is the Bigeye Thresher.

The thresher shark can grow up to 16 feet, with half of it making up the caudal fins of the tail. Its tail is covered with rows of tiny, sharp spines that it uses to stun its prey.

They can be found in the cold waters of the Atlantic Ocean and generally are not a threat to humans.

Found in the shallow waters of the Pacific and Indian oceans, the leopard Whipgray is next on our list of animals with tails. It has leopard-like spots all over its body, thus giving it its name.

They are carnivores animals who feed on small fish and squid, caught using their whipped tails.

A member of the stingray family, their body width can go up to 5 feet. Their long and slender tail usually grows up to 4 feet long and has a barb at the end.

Leopard whip rays spend most of their time buried in the seafloor and are not very active creatures.

Most of us have seen these beautiful, long-neck animals in zoos or safaris. But do you know that it is also a contender for the longest tail along with its famous height?

Yes, a giraffe’s tail can grow to 8 feet long! The long tail of the animal serves as a defensive tool against biting insects.

Giraffes reach a height of around 18 feet and are native to Africa. Interestingly, they can survive by drinking water only once every few days.

When it comes to food, these gentle giants can consume up to 75 pounds of food each day. Their favorite is acacia tree leaves!

Also known as Shaw Mayer’s Astrapia, they are found in upper montane and subalpine forests. This flying beauty has one of the longest tails in the bird kingdom! Their bodies are medium-sized, growing to around 12 inches.

But the tail can be up to 3 feet long and often has to be untangled by the Astrapia before taking flight. The long feathered white tail is only found in males, and besides the sexual adaptation selection, it has no other function.

Unfortunately, due to habitat loss, they are almost extinct. Another attractive feature of this adult bird is its iridescent green head and bib.

Spider monkeys are very social primates that spend most of their time on trees. This cute primate has a body that grows up to 21 inches long. They got their name due to their long tail and limbs.

Its beautiful tail can measure up to 34 inches in length. Their long tail is often described as a fifth limb, and it is designed to assist the monkey with its arboreal life.

They are omnivores creatures; flowers, nuts, fruits, and insects are among their favorites, and they live up to 40 years of age.

Unfortunately, spider monkeys are on the verge of extinction and mainly belong to the jungles of South and Central America. These primates are easily recognizable by the white markings all over their black fur.

Another animal with a tail longer than its body height is a creature animated in the movie Madagascar. And yes, they are natives of southwestern Madagascar!

Ringe-tailed lemurs are social creatures found in groups known as troops, which count up to 30 individuals.

Their long tails measure about 2 feet long and are covered by 13 black and white stripes. These striped animals use their markings as a way of communication.

Namely, when fighting for the female, males will use their smelly secretions found in their tails to outstink each other. The lemur that produces the stinkier secretion in the air is more powerful and hence gets its lady. (source)

Having the longest tails in the lizard family, Asian grass lizards have a bright yellowish-green body with black spots. They are mostly found in the tropical rainforests of Southeast Asia and southern Russia.

Their extremely long tail helps the animal in balancing while climbing through blades of grass. Their long tail also comes in handy when attacked by predators, as they have the ability to drop their tails off and escape the danger.

The Asian grass lizard has a body length measuring about 3-5 inches and a tail of about 9 inches. Their tail typically has six stripes.

Popular as pets among lizard lovers, they often feed on snails, fish, worms, and frogs too! They are not venomous, but if threatened, they produce loud hisses.

These long-tailed birds are found throughout African countries, such as Angola, Kenya, Zambia, South Africa, and Botswana. Characterized by their lengthy tail, these birds are easily recognized in the flights.

The length of the tail is around 20 inches long, more than double of their body length. However, this adaptation is only found in male birds.

According to animal experts, their long tails composed of twelve feathers serve only one purpose. Sexual selection. During the breeding seasons, females’ choices for males are typically associated with the tail length.

As the name suggests, these animals have short tails that only measure 1.26 inches in length. Their bodies can grow up to 5.5 inches.

Mostly found in North America and southern Canada, they love feasting on reptiles, mice, and small salamanders. When hunting, they immobilize their prey using the neurotoxins in their saliva.

Short-tailed shrews have a glossy coat which is usually black or brownish gray. Most of their time is spent in burrows. They are active throughout the year and even eat sunflower seeds, berries, and fungi.

A vole has the shortest tails in the rodent family. It has a compact body with short legs that is stocky. They are an overall 6 to 8 inches in length, while their tail is no longer than 3 inches long.

When in large numbers, these tiny creatures can cause a lot of damage in fields and vegetable patches. They are commonly known as field or meadow mice.

Voles are mostly found in heavy grassy areas or litter. But fields, fruit orchards, and windbreaks are their favorite places to hide.

These fluffy creatures are very affectionate and intelligent. Raised mostly as pets in households, bobtail cats are a healthy and strong breed.

They stand out from other cats due to their unique tail, caused by a genetic mutation. Their short tails are 1 to 4 inches long and can only be seen clearly when they are alert!

This breed first appeared in the 1960s in Arizona and has been a household favorite since. They shed moderately, and their coat can come in chocolate, red, blue, lilac, black, brown, and cream.

Bobtail cats live for 13 to 15 years on average. They are very active and love playing hide-and-seek and fetch.

A member of the cat family, the lynx, has a very distinguishing short tail. However, they have large paws and long legs. Since they are found in colder areas, they have a thicker, rougher coat of fur. They have black portions on their tail-tips as well as the ear area.

The reason for having short tails is not clear with certainty, however, the animal experts think that the loss of the long tail is associated with reducing the body heat as these cats live in cold regions. Also, it is believed that short tails make these cats even more lightweight, which prevents them from sinking in the snow.

Lynxes can grow up to 46 inches in length, with their short tails measuring about 2 to 6 inches. They are excellent climbers as well as great swimmers. It is a carnivore cat that mostly feeds on other smaller deer, rabbits, and other mammals.

These majestic beauties are primarily found in the woodlands of North America and the Caribbean. Depending on the region, short-tailed hawks prey on smaller birds as well as lizards, wasps, frogs, and even various rodents.

The short-tailed hawk can grow up to 16 inches in length and has a tail that is quite short for its body. This bird is popularly known in Florida as the “little black hawk.”

Their feathers are mostly dark brown or black-brown. Similar to other hawks, the adult short-tailed hawk has a high-pitched scream.

This bandicoot rat is another short-tailed member of the rodent family. They have short and stubbly hair in the summers, and in winter, their body is covered with dense, long, and soft hairs.

The body length of short-tailed bandicoots varies from 6.5 to 8.8 inches. In some regions, they are also called Indian bandicoot rats and are brown-colored on the upper parts. Their underbellies are usually lighter, with a white patch on the throat.

It is a creature of the night and spends most of its time in burrows. They mostly live in the river valleys and lakesides of various parts of Asia and Africa. Its many predators include jungle cats, weasels, snakes, dogs, and cats!

These medium-sized birds are found along the banks of the Amazonian rivers in Columbia, Brazil, Peru, Ecuador, and Bolivia, it is the closest relative of the yellow-faced parrot.

The short-tailed parrot has a large dark bill, and its body is brightly green. It can grow up to 9.5 inches in length and has a very short tail.

Adult parrots have a reddish maroon spot at the base of the outer tail feathers and on the shoulder. These birds gather in large, exciting noisy flocks towards the evening on the barks of roosting trees.

Due to its habitat destruction and the pet trade, this species of parrot is considered to be endangered.

Why Do Animals Have Tails?

Animal tails are used in a wast variety of ways. And with so many diverse types of tails, it is difficult to say all the functions of tails; however, there are a couple of most common biological functions.

What Animal Has the Longest Tail?

Of all land mammals, giraffes wear the crown of animals with the longest tail. The length of the adult giraffes’ tails is measured to be 8 feet long.

On the other hand, an animal that has the longest tail in proportion to its body is the Asian grass lizard. The tail of this long-tailed lizard is 9 inches long, which is three times longer compared to the length of its body.

What Cat Has the Longest Tail?

Out of all cat breeds, Maine coons have the lengthiest tail. The largest measured tail of a silver Maine coon was 17.58 inches, the same length as the body of the animal. The main reason why these cats have such long tails is that it serves as protection for the animal in cold weather conditions in the wild.

What Animal Has the Shortest Tail?

The shortest tail in the animal kingdom belongs to the short-tailed shrew. These tiny animals have a total length of 5 inches. The tail of the shrew is measured to be one-fourth of its body length, at about 1.26 inches.

In Summary on Animals With Tails

These were some facts about a few fascinating creatures from the animal kingdom. Be it the long-tailed spider monkey or the short-tailed bandicoot, each animal has a unique characteristic of its own.

Thank you for reading. We hope you found this “animals with tails” article interesting! Do let us know if you found any other contender who can challenge these animals in the short or long-tailed categories!

For the very end, we would like to recommend you a similar read: Animals With Manes