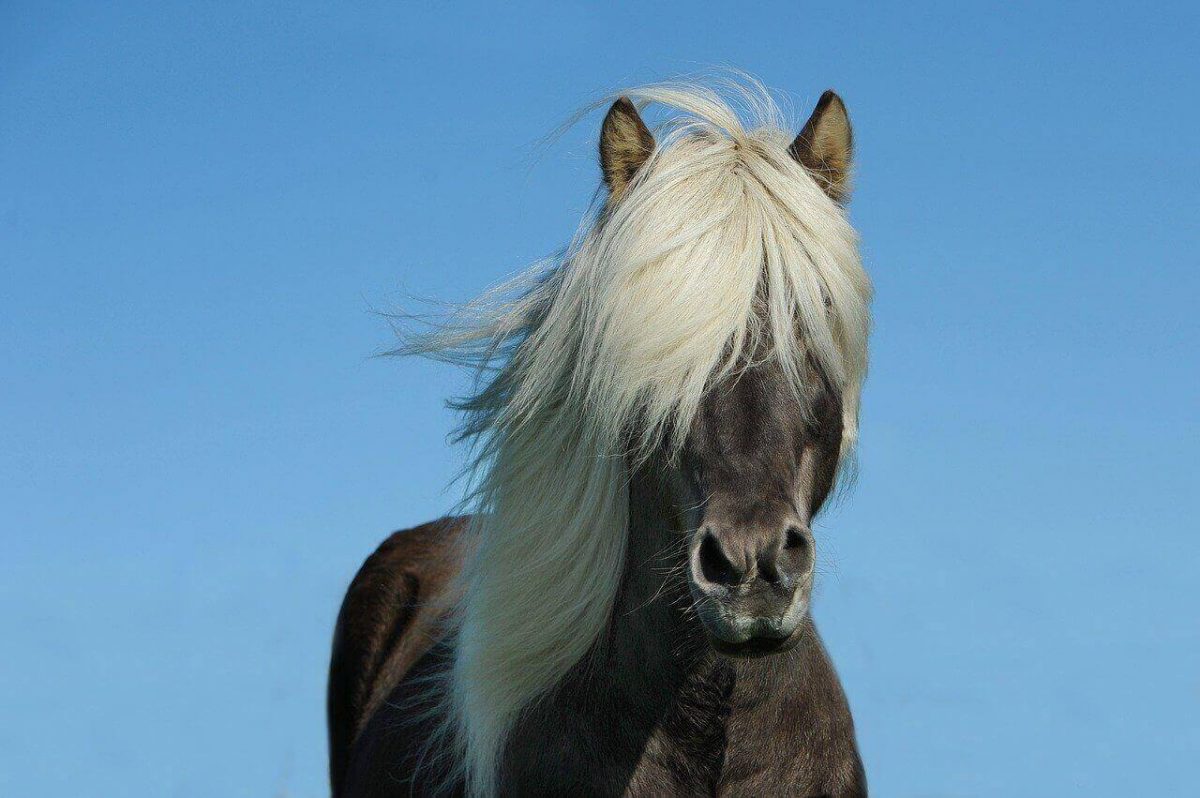 The mane is hair that usually grows along the top and sides of the animal’s neck and shoulders; however, it is also seen in other parts of the animal body. While some animals have long and soft hairs, others may have a short upright mane.

Without further due, let’s talk about 8 animals with manes.

When we think about animals with manes, lions are probably the first ones that come to your mind.

These legendary predators are distinct from other big cats by their prominent mane. However, female lions do not have a mane, and it is only a male feature. But why do lions have hair?

The lion’s mane will start to grow when they are about one year old. The main reason lions have the mane is that it serves as a protective shield when fighting against other lions.

Also, the length and the color of the lion’s mane may tell a lot about the lion fighting success, testosterone production, and genetic precondition. The darker and longer manes show fighting success against other rivals and a healthier lion in general.

As a result, other males often avoid the lion with lengthy hair because it signals its strength and fighting prowess. 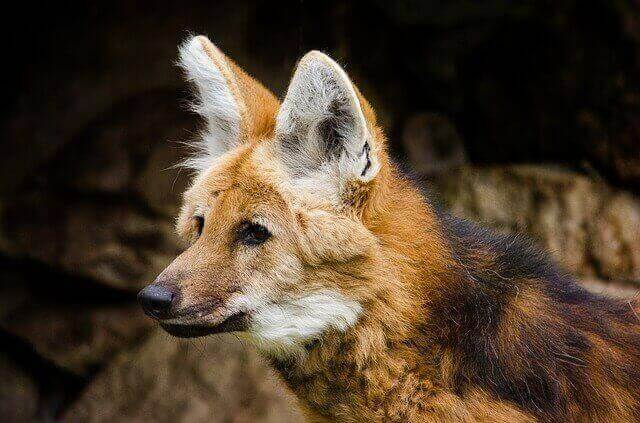 Maned wolves are pretty interesting creatures. Their physical appearance is very similar to foxes, but they are neither foxes nor wolves.

The maned wolf is the only species in the family of Chrysocyon, which, when translated, means ‘golden dog’.

The usual habitat of these solitary animals is in open environments of South America.

The name of an animal comes from the characteristic of black mane running along their neck and over the shoulders.

When they sense danger, their manes will erect, but besides, these hairs do not have any specific function. 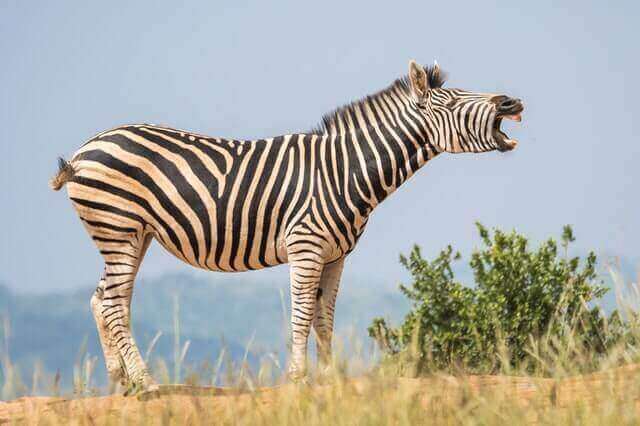 Zebras are one of the most known wildlife of Africa. Equipped with distinctive black and white stripes, zebras are closely related to donkeys and horses.

But unlike domestic horses, who usually have longer and softer hairs, zebra manes are stiff and upright.

An upright mane is a physical characteristic seen in females, males, and young zebras, that leads to the assumption that the zebra manes are primarily there to protect the animal from neck bites from potential predators.

This argument seems logical, knowing that most of the attacks of their number one predator, lions, end up towards the neck. 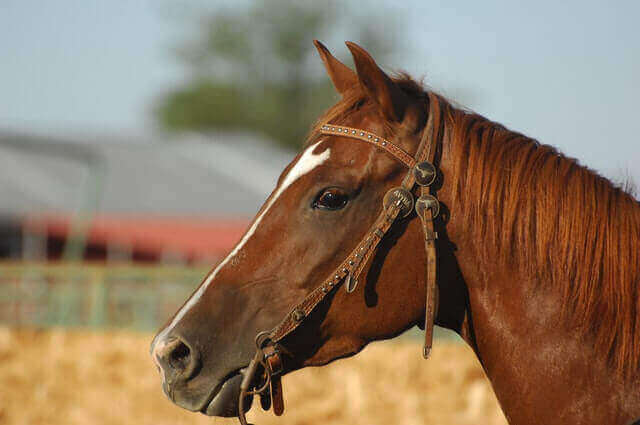 When we think about horse manes, we usually associate them with horse aesthetics. But actually, horse manes have a few important functions.

Horse manes protect the animal in both cold and hot weather. On sunny days, the mane serves as a shade. While during the winter, manes act as a blanket, and it provides warmth for the animal.

Besides that, manes are necessary protection of a horse’s neck. Most predators, when going after prey, attack the animal’s neck. The thicker the hair, the more the chance horse has to get away alive in case of being attacked.

And lastly, the horses’ mane is important when it comes to bug protection. Although the first line of defense against insects is their tails, horses would shake off their manes to knock on any annoying pests. 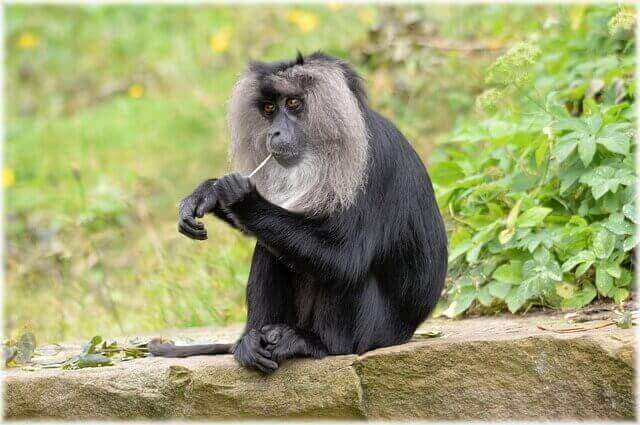 The lion-tailed macaque is very unique monkey species. Because of their unusual silver-white mane characteristics, these apes are known as “beard apes”.

The animal got its name from its medium-sized tail, which has a black tuft, very similar to a lion’s tail.

The hair of the lion-tailed macaque surrounds its head along with the cheeks and down to the chin.

These interesting creatures are shy and hard to see due to their arboreal lifestyle. Besides, the lion-tailed macaque is among the most vulnerable primate species.

It is estimated that the total population of these maned monkeys is less than 4,000. 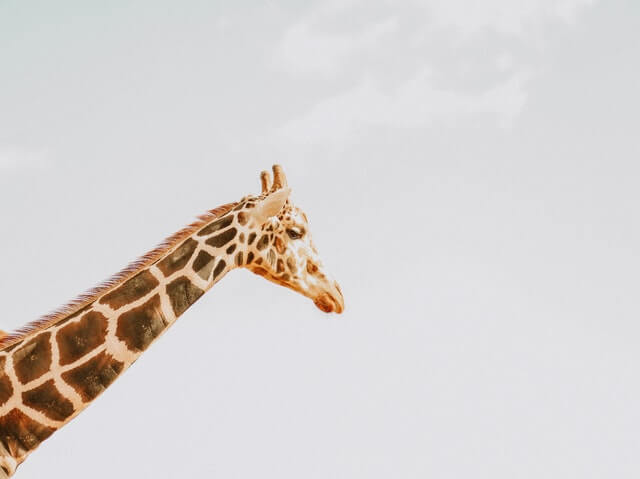 Some animal characteristics are not entirely clear to biologists. Including the purpose of giraffe manes.

Throughout the upper edge of their long necks, giraffes have short erect hairs. These hairs are not long enough to protect the animal neither from bugs or predators.

The only assumption that stands out is that giraffes have manes because of sexual selection.

As we have seen in other animals, the thicker and longer manes are usually attractive to the opposite sex. 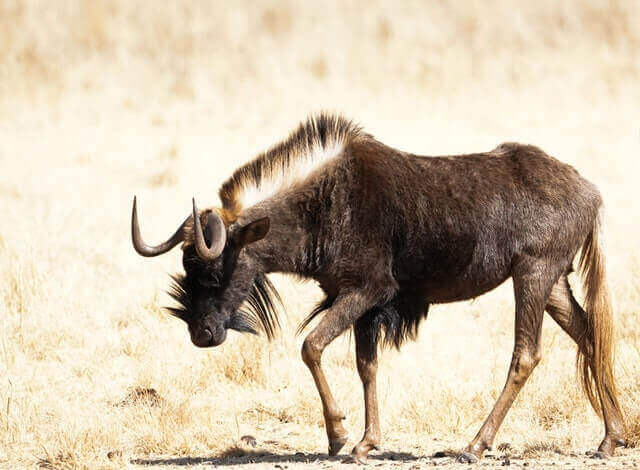 Wildebeests, also called gnus, are large animals that eat grass and are native to Eastern and Southern parts of Africa.

Both species (black and blue) of wildebeests are horned, have broad muzzles and bushy tails.

Also, throughout the upper edge of their necks, wildebeests have thick shaggy manes. Unlike most antelopes, gnus additionally have long beard hair that hangs from their chests.

Since manes are attributes found in both males and females, It is believed that thick neck hairs are an evolutionary function to protect the animal from predators bites.

The maned sloth or the Brazilian sloth is one of four three-toed sloth species. They are only found in hot and humid climates in the Atlantic coastal rainforests of Brazil.

The species earns its name after its long black hair, which grows along the neck and shoulders. Besides their unique hair, maned sloth has similar characteristics as other sloths.

Hanging upside down from the forest branches, spending about 80% of their daytime sleeping. Males and females are distinguished by the color of the mane; males typically have a darker and larger mane.

There is no particular evolutionary reason why these animals have a mane as opposed to other sloth relatives.

For certain animals, having a mane serves as protection against attacks by other creatures. For others, it may be associated with the sexual reproduction and attractiveness of the individual. However, the role of the mane in some animals is not entirely obvious. One thing is for sure wildlife is a topic that never fails to surprise us.