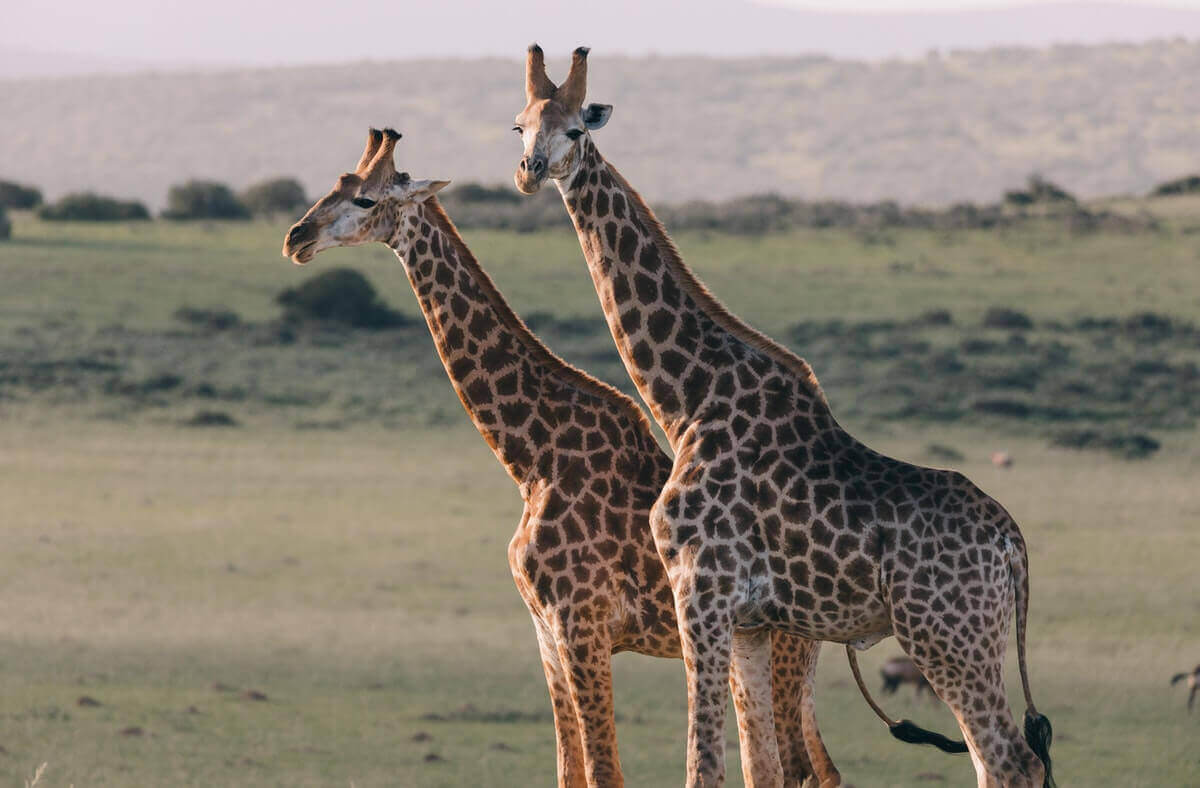 Long-necked animals have always been an interesting topic to discuss. But have you ever wondered why some animals have such long necks?

Well, one part of the biologists say that it all comes down to evolution.

Some animals with long necks, such as giraffes and gerenuks, use their lengthy attributes to reach the tops of the trees when feeding. As a result, their long neck physical characteristic helps them minimize food competitors.

However, other scientists suggest that long necks are important attributes when fighting for mates.

But that’s not all, stick with us, as we are going to uncover 12 amazing animals with long necks! 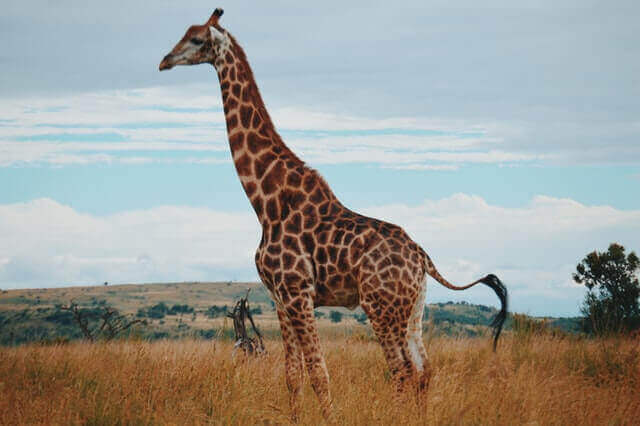 Giraffes are the tallest land animals on the planet. On top of that, they are animals with the longest necks.

These giants are herbivorous who primarily feed on the leaves of the acacia. Their size and long necks help them reach the foods that are out of range for most land animals.

Although, despite their colossal size, giraffes eat less food than many other mammals due to their efficient digestive system.

However, their huge necks also have a downsize.

Because of their long necks, giraffes have to spread their legs and almost kneel to the ground in order to drink water. This awkward position makes them exposed to predators such as crocodiles or lions that usually target their necks.

Apart from that, such long necks make them be one of the very few animals that are not able to swim.

But, when fighting, male giraffes would use their necks as the main weapon. Known as necking. Giraffes would hit each other’s heads until the defeated one retreats.

In most cases, a giraffe with a longer and thicker neck comes out as a winner.

Did You Know: Giraffes do not need to sleep more than 30 minutes per day! 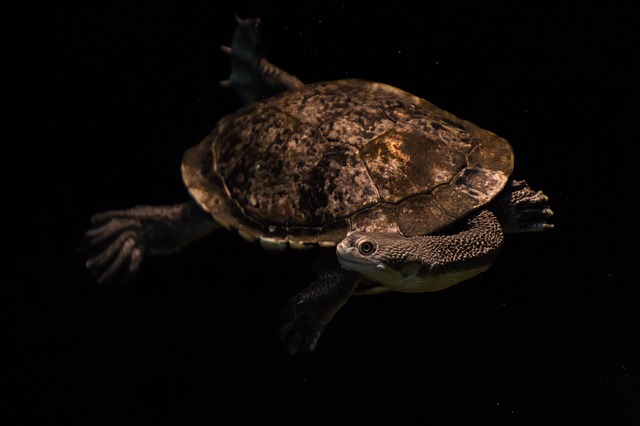 The snake-necked turtles are pretty interesting creatures. They are medium-sized carnivorous animals, who inhabitant the freshwater environments of Australia.

These semi-aquatic long-neck reptiles are members of the side-necked turtle classification.

The reason behind the “side-neck” name is because these turtles, unlike most of their relatives, can’t retract their head into the shell when threatened. Instead, they would lay the head and the neck to the side.

The-snake necked turtles have the longest among all turtle species. As a matter of fact, the size of their neck is approximately 50% of their total length.

They are expert fishers, and the size of their neck comes in handy when catching fish.

Did You Know: When stressed, the snake-necked turtle uses pungent spray, and because of that they are also known as Stinkers! 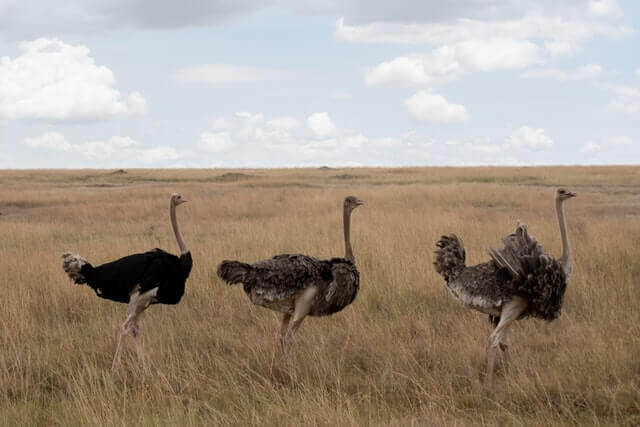 The common ostriches are giant flightless birds native to savannas and open woodlands of Africa. The bulk of their diet consists of roots, fruits, and flowers; although, they would snatch some insects and lizards from time to time.

They are the largest bird species on the planet, sizing 9 feet from head to toe. The length of their neck is about one-third of their total body weight.

Their long necks and ability to turn it 360 degrees round help them spot the predators before they get very close.

Besides, ostriches are equipped with strong legs, and they can reach speeds of 43 mph.

Taking into account how harsh environments ostriches live in surrounded by bloodthirsty predators, these physical characteristics are important for their survival.

Did You Know: The common ostriches have eyes of two inches diameter, making them land mammals with the largest eyes! 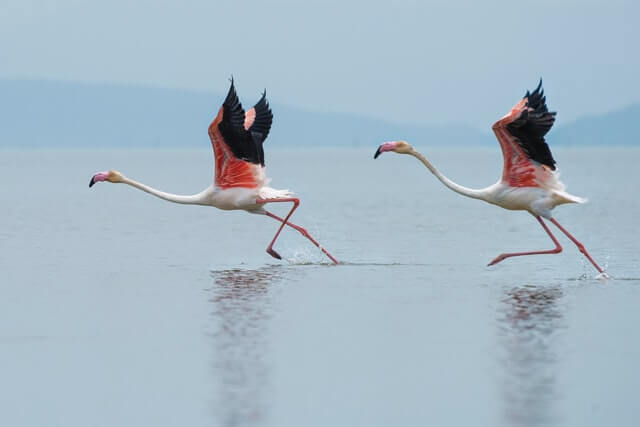 Flamingos are unique pink-colored wading birds that live in rivers, ponds, lakes, salt marshes in Florida, Mexico, and the Caribbean.

Flamingos are social birds, and they usually live in large groups whose population can number in few hundreds.

Recognized by their long legs and “s” shaped necks, flamingos use their physical characteristics to feed on shrimps, algae, crustaceans, and other meals from the bottom of the lakes.

Besides, the flamingo neck is extremely flexible; they can even bend it backward in order to groom themselves.

Did You Know: Due to their light body weight, flamingos can fly at speeds of up to 40 mph! 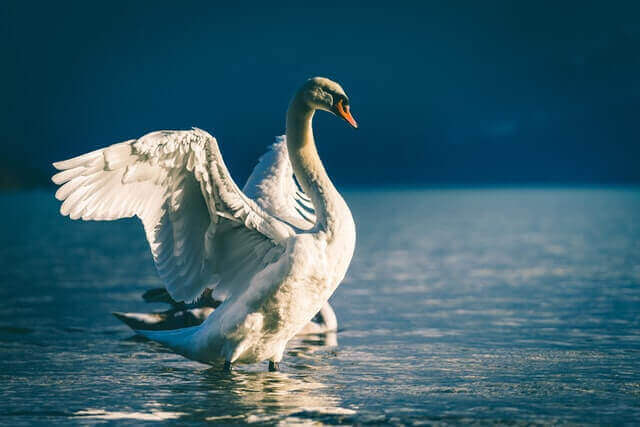 Swans are beautiful creatures, closely related to geese and ducks, and they are one of the rare animals that are able to fly and swim.

There are six living species, and they typically live in warmer environments of New Zealand, Australia, and the Chattam Islands.

Most of their diet consists of leaves, roots, stems, and other aquatic plants. Their long necks are quite useful when foraging underwater plants.

Swans are the largest waterfowl members and compared to their relatives they have a much longer neck.

Did You Know: Swans have long lives; in the wild, they can live for more than 20 years! 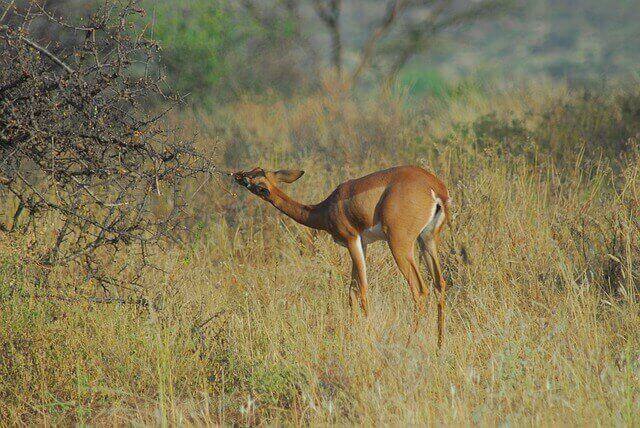 The giraffe gazelle or the gerenuk is a long-necked antelope native to the dry parts of Africa. These animals are notably tall, characterized by their lengthy slender necks and legs.

These antelopes are adaptable eaters. They are herbivores animals, munching mostly on bushes, fruits, and flowers.

Thanks to their super-long necks, they can reach plants that grow 6-8 feet above the ground.

When foraging, they’ll stand on their hind legs, using their forelegs to pull down plants. Which is pretty unique for any antelope species.

However, this rare feeding adaptation helps them obtain moisture from the plants they feed on, which allows them to live in hot habitats without needing to drink water.

Did You Know: The gerenuks have been described as humble creatures, and they are often referred to as “queens of humbleness” 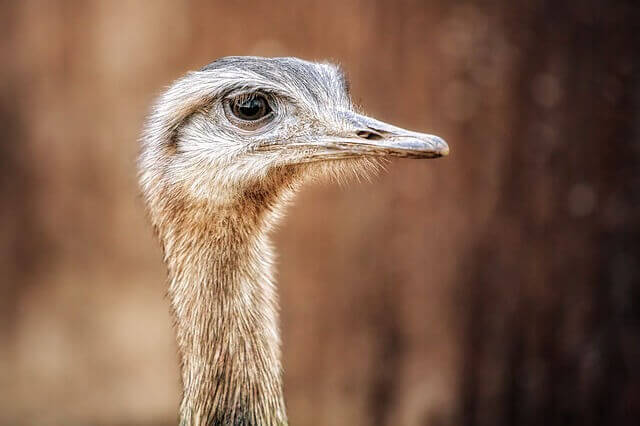 Rheas are large birds, distantly related to the emu and ostrich. Even though they are flightless birds, rheas have unusually long wings.

These long-necked birds live exclusively in the South American continent, and they usually prefer open lands. Recognized by their grey-brown feathers, long necks, and legs, rheas can grow 67 inches long.

Rheas are omnivores, but they are, for the most part, vegetarian eating broad-leaved plants and fruits. However, they would occasionally eat rodents, insects, and small reptiles.

Did You Know: When attacked by the predator, rheas would use zig-zag dodging tactics to flee! 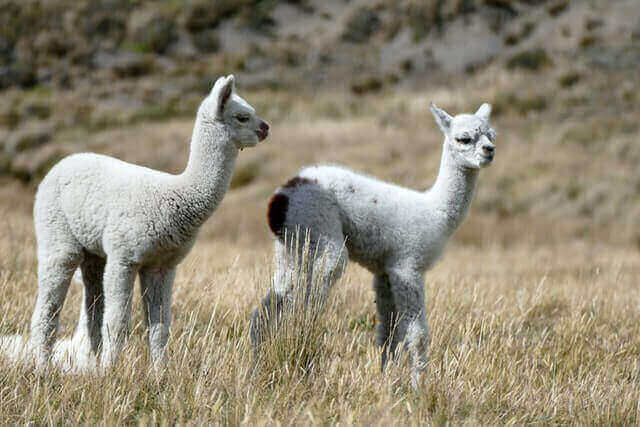 Alpacas are South American mammals, often confused with the llama. Although, llamas are notably larger than alpacas.

Alpacas are animals that feed on grass, and they eat 1.5 of their total body weight per day. However, these wooly creatures adore munching on tree leaves.

Thanks to their long necks, they are able to reach leaves on the top of the branches.

Besides, alpacas are vulnerable to different carnivore predators, and so their long necks have an extra role – help them to spot the enemies before they come close.

Did You Know: Alpacas use body language to communicate; the most common way is spitting! 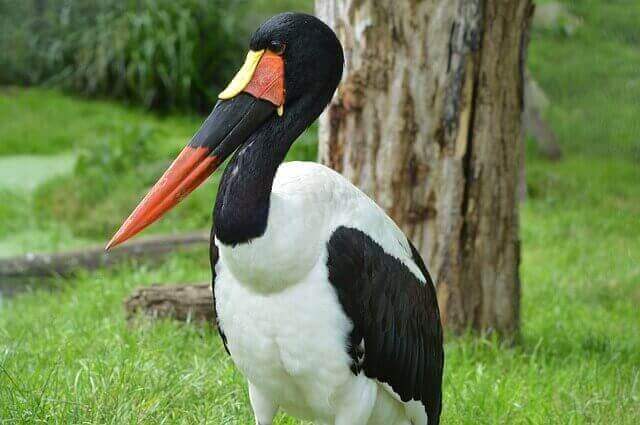 The jabiru is a long-neck and legs wading bird found in Argentina and Mexico. The name Jabiru, when translated from the Tupi-Guarani language, means “swollen neck”.

These birds are easily distinguished by their white plumage and their black and red necks. They are one of the largest flying birds in all of America.

Jabirus are social birds, and they occupy habitats near ponds and rivers, feeding mainly on fish and amphibians. They are opportunistic feeders, and when hunting, they rely more on tactile sensation than vision.

Did You Know: Despite their size, jabirus have been considered to be graceful fliers! 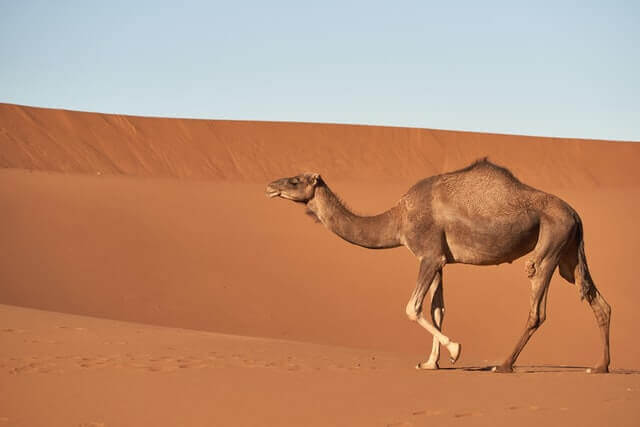 The Arabian camel, also known as dromedary, is the tallest camel species, with an average height of 6.3 feet. Dromedary camels can be found in the Middle East and North Africa.

These camel species are distinguished by their long, curved necks, one hump, and hairs on the throat. Also known as ‘ships of the desert’, camels have an extreme tolerance to heat and incredible endurance.

Camels are ground feeders, and due to their long legs, they have naturally evolved into long-neck animals.

This is especially true for the Arabian camels, who have the longest legs of all camel species. So in case, they had short necks, they wouldn’t be able to feed on plants from the ground.

Did You Know: The Arabian camel has the ability to travel more than 100 miles through the desert without water! 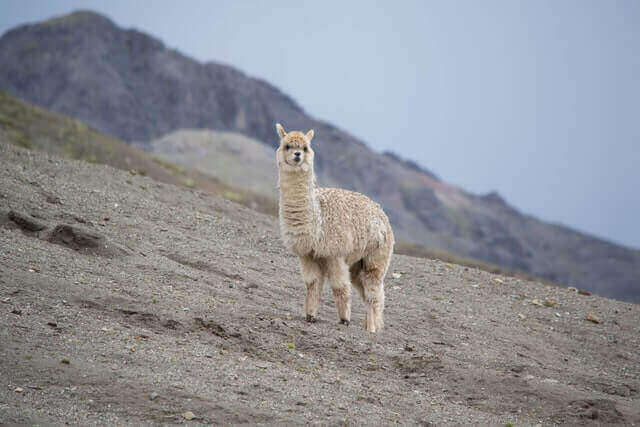 Llamas are livestock native to Colombia, Bolivia, Argentina, and Peru. They are very social creatures, often found mixed with other animal herds.

Llamas are grazer animals that can survive by eating a wide variety of plants and by needing to consume very little water.

Due to their feeding habits, long necks come in handy when. Similar to their camel relatives, they would have to kneel in case they have had short necks.

Besides, llamas use their sturdy necks when fighting between themselves. The fights are quite dramatic. Apart from neck-wrestling, kicking, ramming, and spitting are often seen as well.

Did You Know: Llamas are considered smart creatures, and they are quite easy to train! 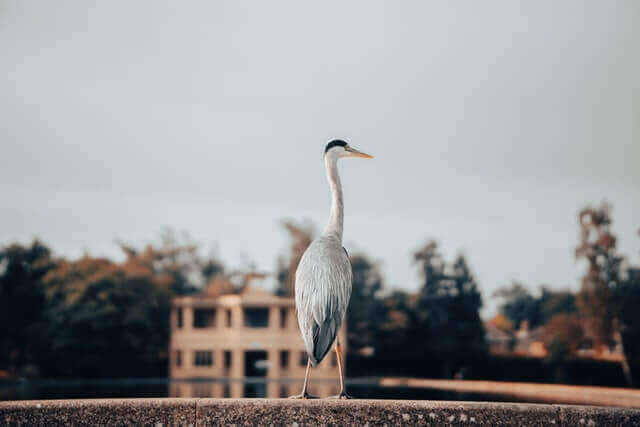 The herons are coastal birds, found in North and South America, as well as the Caribbean and the Galapagos Islands.

Unlike most birds with long necks, herons retract their necks during flights. Their necks consist of 22 cervical vertebrae, allowing them to curve their necks in “s” shape when flying or hunting prey.

The herons are carnivorous birds, and their diet mostly consists of aquatic prey. Including fish, reptiles, aquatic insects, and amphibians.

Did You Know: In Ancient Greece, herons were considered to be messengers from the gods!