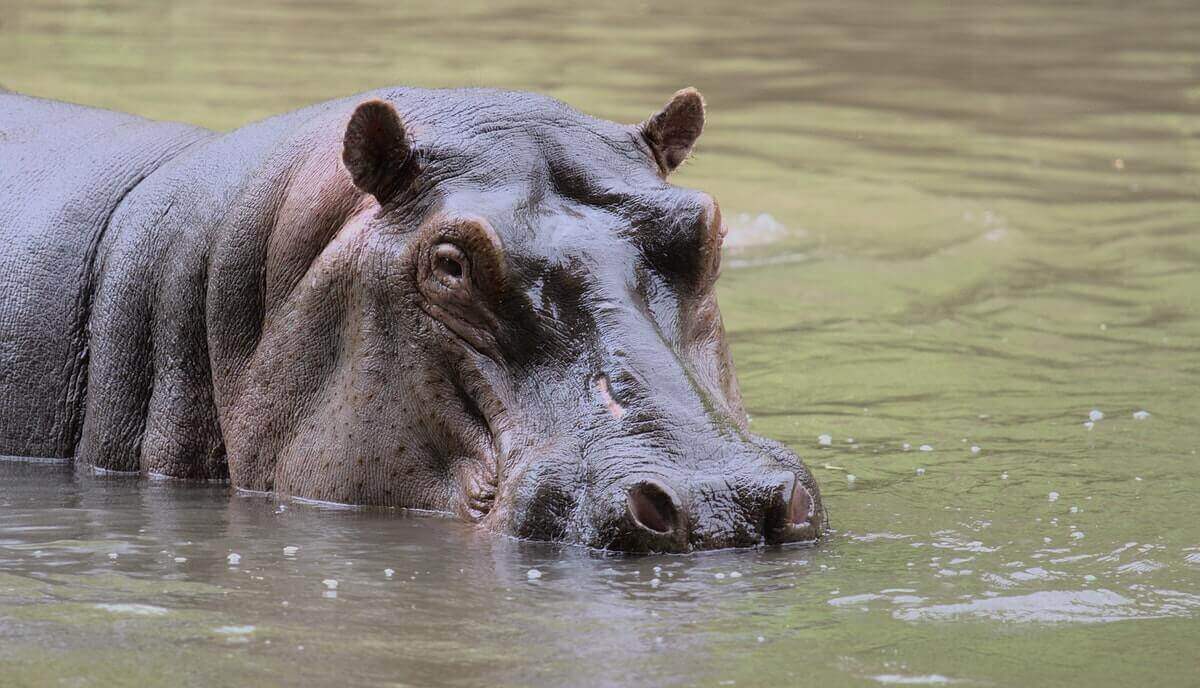 Some animal species are natural-born swimmers, while other animals can’t swim. Although many animals are not born with the ability to swim, instead they learn that skill over time.

But are there any animals that never manage to master swimming ability? What animals can’t swim?

There are more than 8 million animal species in the world, but only a few animals can not swim. Chimpanzees, gorillas, tortoises, hippos, and giraffes can’t swim mainly because of their physical structure. Unlike hippos, all of them avoid going into deep water since the consequences of not being able to swim can be fatal. 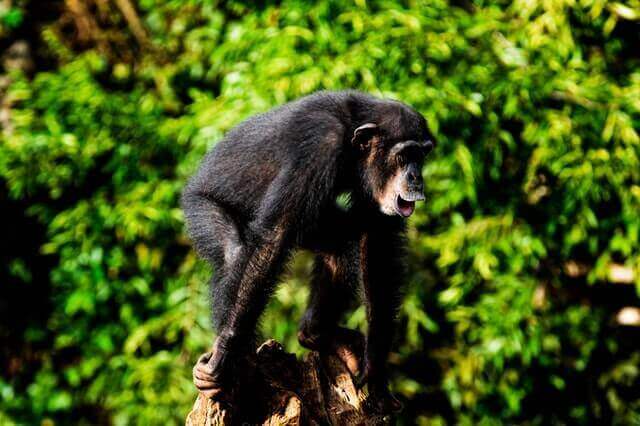 Chimpanzees share a lot of DNA sequences with humans, and they are our closest extant relatives, together with bonobos. In addition to that, chimpanzees, like us, are not natural-born swimmers.

Despite the fact, chimps can’t swim, they like an occasional dip. Hence, splatter in shallow waters is not uncommon for chimps, but they usually avoid going into deep water.

The main reason why chimps are not so good at swimming is the fact they have bulky bones. Also, their muscular and low body fat bodies are not working in their favor.

Consequently, when chimps enter deep water, they immediately start sinking, and they have a hard time keeping their heads above the water, which usually ends tragically. 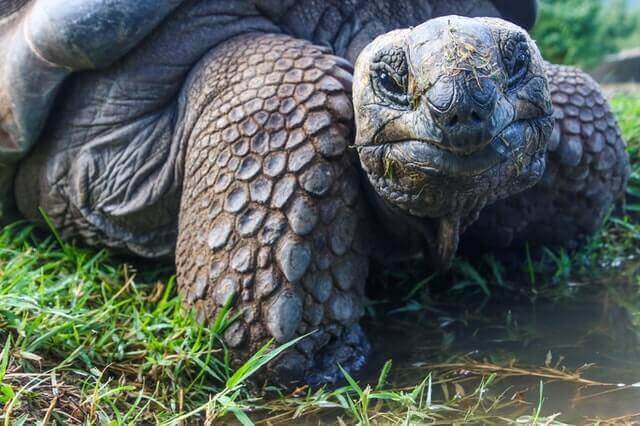 Despite having aquatic relatives, a tortoise is another animal that is unable to swim. Unlike turtles, tortoises have not physically evolved into swimming animals.

Equipped with bent legs and clawed toes, tortoises limbs are suited for land and not for water environments.

Also, their shells are bulkier and heavier than the ones turtles have. It serves as a protecting shield from predators on land, but it disables them to swim safely.

The shell can weigh anywhere from 5 to 30 lb, according to the age and the size of the tortoise. However, the heaviest ever recorded tortoise (the Galapago tortoise) was around 880 lb heavy.

Although tortoises can’t swim, the majority can float due to the air in their body. 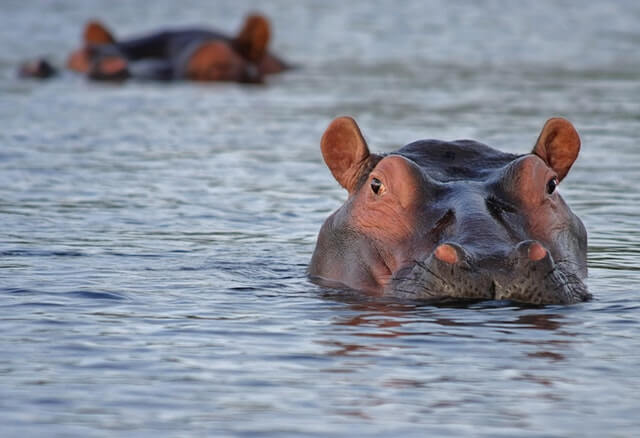 Hippos are semi-aquatic giants native to Sub-Saharan parts of Africa.

During daylight, hippos are commonly seen in rivers and lakes. In fact, hippos spend on average 16 hours per day in the water.

Because of their sensitive skin, they can’t be exposed to the sun for long periods. As a result, hippos will spend the day in the water cooling off, and when the sun sets behind the horizon, they will go for their second favorite activity – grazing grass.

Even though hippos are semi-aquatic, they are one of few animals that can’t swim. You may wonder how is that even possible when they spend so much time in the water.

The reason lies in their dense bones and heavy bodies. Hippos are huge, an average male hippo can weigh around 4,000 lb.

And because of that, they can’t swim, instead, they move by walking on the bottom, and when they need to breathe, they launch themselves above the surface to inhale.

What’s also interesting is that hippos are only territorial in the water. While they are on the land, hippos usually eat, and so they ignore other animals. 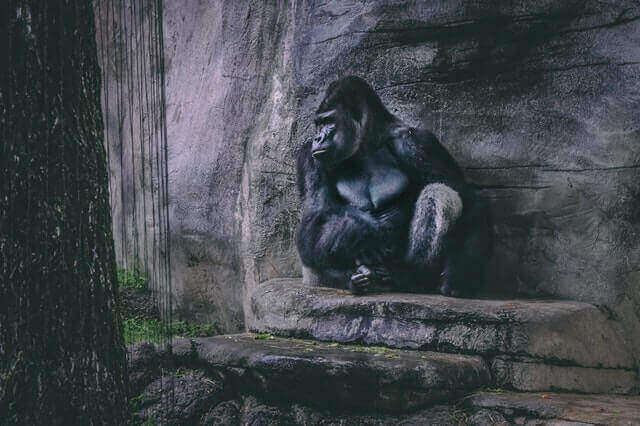 Gorillas are another ape species that can’t swim. The same as chimps, gorillas are not born with swimming abilities, and so they avoid water.

Just like a non-swimming person, gorillas are naturally cautious and afraid of water. For instance, some captivity gorillas have been noted to use the stick as a tool to measure the water depth.

Luckily, gorillas are not dependant on the water by any means. They absorb enough water from their diet, and so they rarely even have to drink water. (source)

The reasons for the inability to swim are the same as the ones from their relatives, the chimps. Low-fat bodies, big muscles, and heavy bones, combined all together, affect their swimming potential negatively. 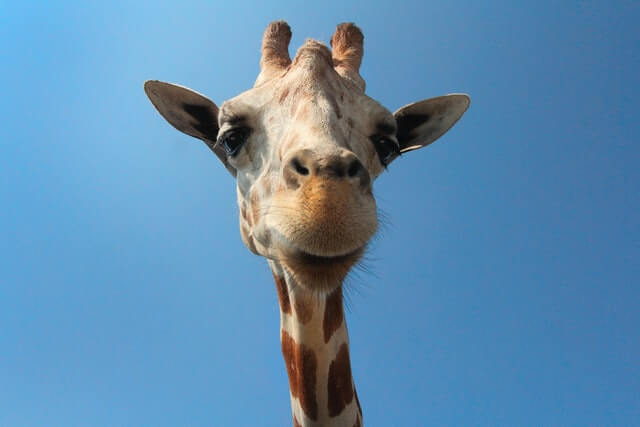 The last member on our list of animals that cannot swim is a giraffe. Giraffes are the largest terrestrial animals in the world, and it’s not a surprise they struggle with swimming.

Giraffes would probably be able to float, but their bulky and massive legs would prevent them from swimming or keeping their head above the water.

Giraffes are herbivore animals, and they hydrate themselves mainly through their diet, hence, they are not seen very often near rivers or lakes.

In order to survive in the wild, for many animals, swimming is a crucial ability. Living in the water, hunting water animals, or simply escaping the predators by running into the water, water was always an irreplaceable part of every animal’s life.

Most animals have developed instincts that allow them to swim safely from a young age. Yet, there are species, that need to developed their swimming ability by practicing it since birth.

Still, some do not fit into any of the above, and this is how we got our list of animals that can’t swim.