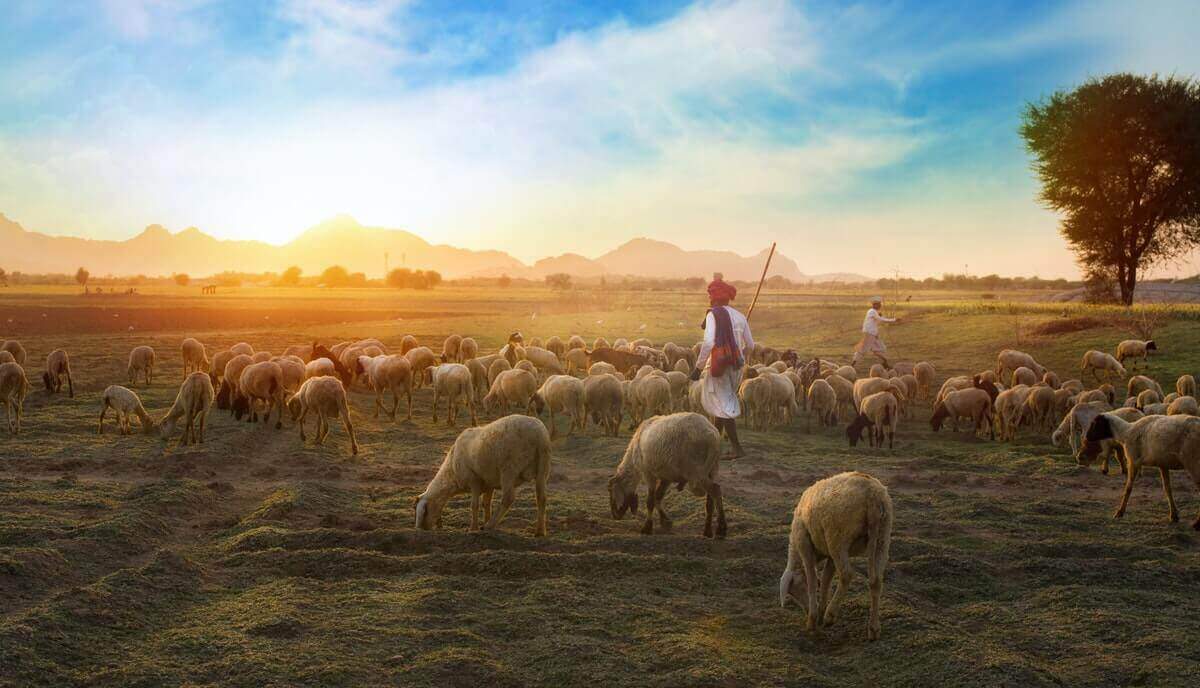 The diet and feeding habits of animals can vastly vary depending on the season and food availability.

However, most animals species fall into one of the three diet categories. Carnivores, omnivores or herbivores.

Many different animals eat grass, but not all eat grass as the only food source.

Some of the animals that we are going to cover in this article do not strictly eat grass. Instead, they feed on different plant food, including grass.

Hippos are large semi-aquatic herbivore animals that eat grass as the bulk of their diet.

During the daytime, hippos prefer to stay in the water to cool off, but once the sun goes down, these giants emerge to graze on grasses.

Fun Fact: Hippos are highly territorial animals, but only in the water!

Each night, hippos spend four to six hours grazing, and during that time, they can eat up to 150 pounds of grass.

However, like the majority of herbivores, hippos as well eat other plants if presented with them. In zoos, their diet is supplemented with lettuce, fruits, and mixed vegetables.

What’s interesting is that some hippos even eat meat on rare occasions, even though they are predominantly grazing animals. 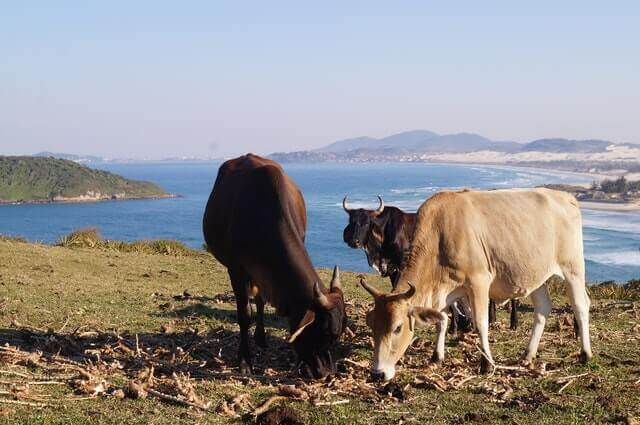 Cows are grazers animals, and the majority of their diet comes from grass. In fact, more than 60% of the total food intake is grass.

Cows are part of ruminant browsing mammals. These animals, usually large hoofed species, have specialized digestive systems that can use hardly digestible plants as food.

Fun Fact: Cows chew their partially digested food for around 8 hours every day!

Meat from grass-eating cows is much healthier and more valuable on the market than meat from cows that eat grain. To sustain a healthy diet, cows will consume around 2% food of their total body weight per day.

However, besides grass, cows also eat corn stems, leaves, grain, among other plant-based food, depending on the availability. 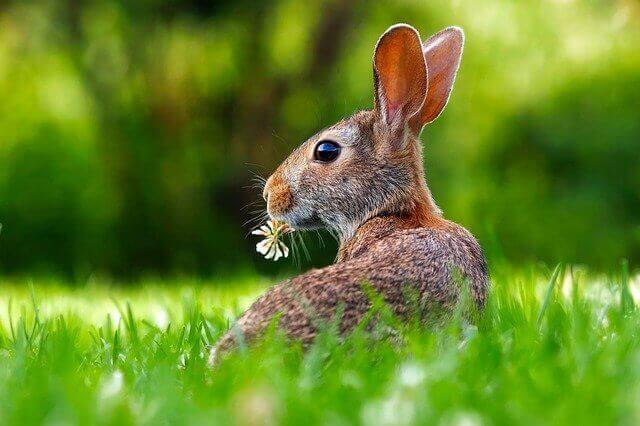 The rabbit is another animal that primarily feeds on grass. These fluffy hopping animals mainly graze at dawn and dusk.

Fun Fact: In order to digest a large amount of cellulose, rabbits eat their own poop!

Besides grass, rabbits also eat leafy weeds and forbs. However, most wild rabbits will mainly eat grass and only occasionally other vegetables that are found near the ground.

In case you have a rabbit as a pet, and you are not sure which grass to feed it, try timothy or oat grass. 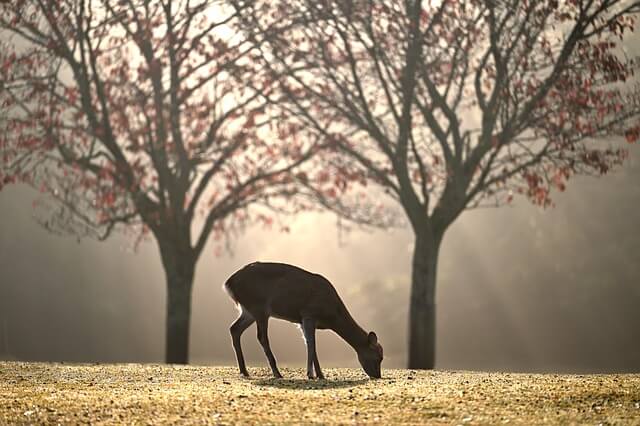 Another browsing animal that made to the list is the deer. The deer selection of food may vary depending on the season, but most species primarily eat grass, forbs, trees, and shrubs.

Fun Fact: All deer species shed their antlers and regrow them in the late summer!

However, deer do not have as developed stomachs as other ruminant animals, such as sheep or cows. Consequently, they prefer easier digestible foods, like young leaves and fresh grass.

Despite being strictly herbivores, some deer individuals have been seen eating mice and other small animals, which is very unusual and unexplainable behavior, even for zoologists. 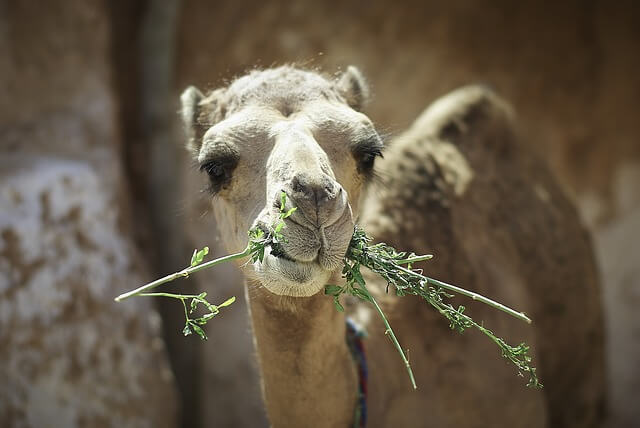 Camels are known to live in harsh environments, and they often struggle to find food. As a result, camels have evolved to be very adaptable animals.

Both camel species will eat grass, oats, grains, and wheat. Sometimes they will spend days searching for anything nutritive.

Fun Fact: Camels are equipped with three eyelids and two eyelashes, mainly to protect their eyes from sand!

Grown camels will usually eat no more than 9 pounds of food per day. Although, if they have a water supply, camels can survive for about 10 days without eating anything. 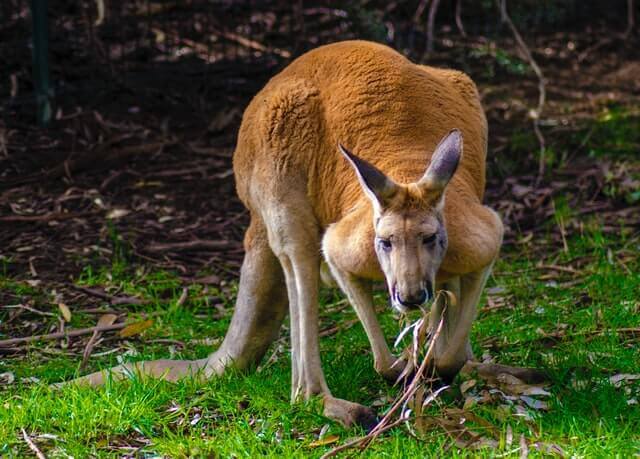 When we talk about animals that eat grass, we must not forget the kangaroos. These large marsupials can be found in wooded forests, savannas, shrublands, grassy plains, and other habitats.

The normal diet of an average kangaroo consists of grass, leaves, flowers, and fruits. Among all species, the eastern gray kangaroo is predominantly the grazer.

It is interesting to see how muscular kangaroos are despite being vegetarians. Especially the red kangaroos. 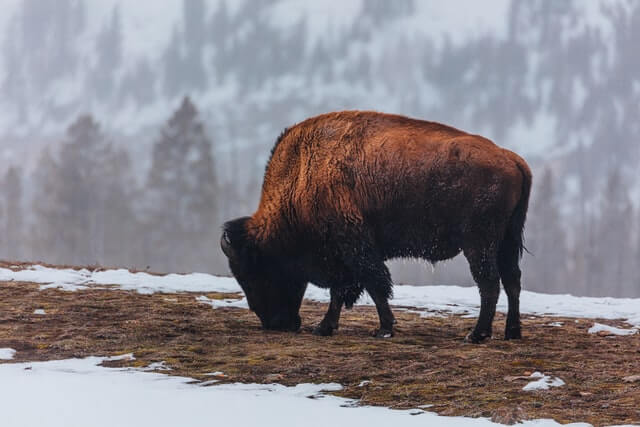 Bison are huge hoofed mammals that mainly live in grasslands, shrublands, and sagebrushes.

Not so long ago, it was believed that bison only eat grasses and sedges. However, these ruminants will also feed on different wood plants, as well as herbaceous eudicots.

Fun Fact: The American bison is the largest living mammal in North America!

It does seem strange that animals that eat grass only may get so big. 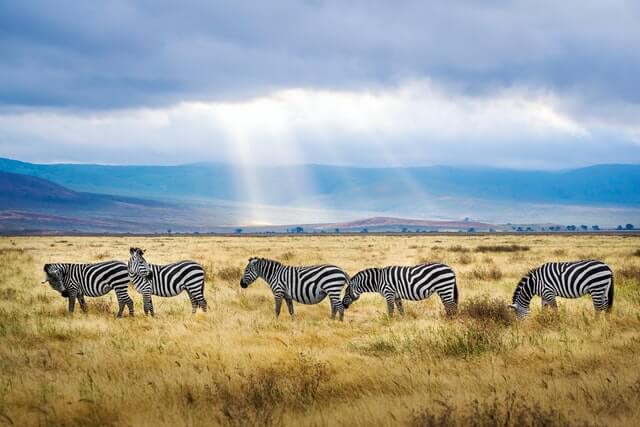 Zebras are prey animals that inhabit different parts of Africa, such as grasslands, savannas, woodlands, shrublands. In case their favorite food is scarce, (grass) zebras will feed on leaves, buds, fruits, roots, and bark.

They are kinds of animals that will spend most of their day searching or eating grass. In fact, these striped animals are known for spending more than 18 hours a day eating grass. 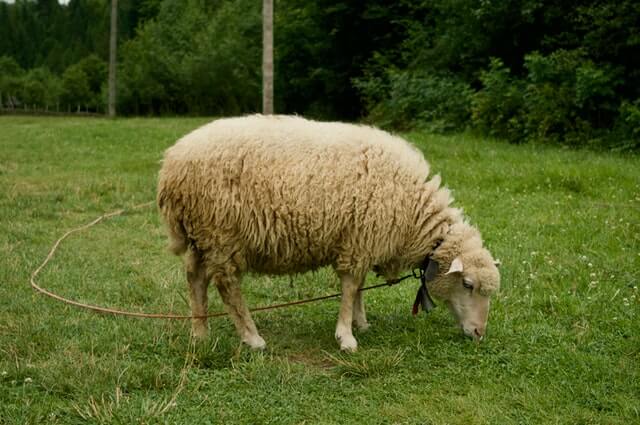 Sheep are one of the most common ruminant livestock animals. They enjoy eating leaves and seeds, but their go-to food is grass.

Just like zebras, these natural lawnmowers are specialized for feeding on grass. Sheep eat grass without having to pull it off from the root, instead, they slowly nibble.

Fun Fact: Sheep wool will grow continuously throughout their lives!

Sheep usually eat no more than 3% of grass of their total body weight, whereas orchard grass is considered to be the most nutritive for them. 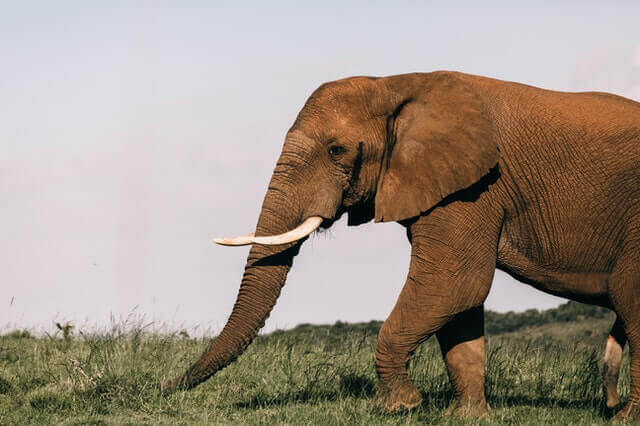 Elephants are the largest land mammals that eat grass. All three elephants species eat grass as a part of their diet.

When eating, elephants use their strong trunks to rip off the grass from the ground or leaves from trees. 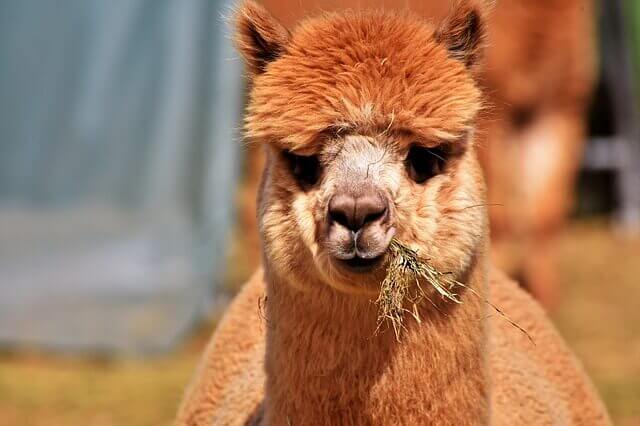 Alpacas are kinds of herbivores that can survive only on grass. However, for having a fully optimized diet, they need hay.

As a general rule of thumb, alpacas should eat no more than 2 pounds of the total body weight per day.

Pasture grass is a highly recommended type of grass because it is rich in protein, especially in the spring. 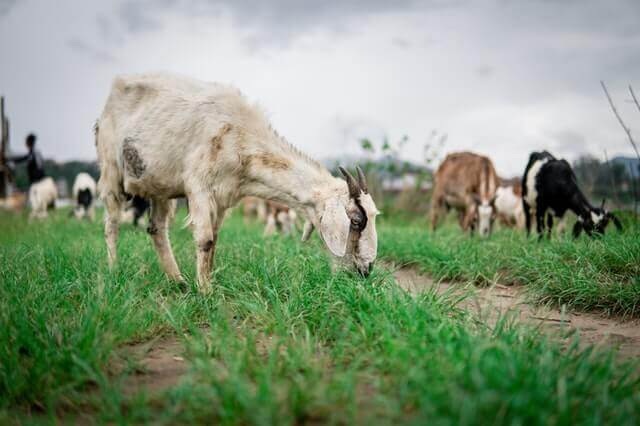 Goats are one of the oldest domesticated animal species, and there are more than 300 different breeds.

Most goats would eat just about anything of plant origin. They also eat grass, but they prefer eating bushes, leaves, or vines.

Fun Fact: If you give a goat a certain name, it will remember it and come when called!

Goats, like cows, do not have upper teeth, and because of that reason, they do not destroy pasture while eating grass. 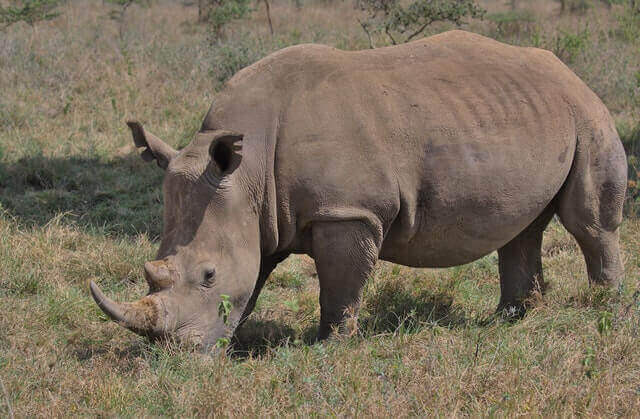 Rhinos are large mammals identified by their horns. There are five different rhino species found in Africa and Asia.

Fun Fact: Rhino horns are made up of keratin, a protein found in fingernails and hair!

These huge animals eat grass in enormous quantities. To sustain themselves, rhinos eat each day around 120 pounds of grass.

Besides grass (which is about 40% of their diet), rhinos eat leaves, branches, twigs, fruits, and shrubs. 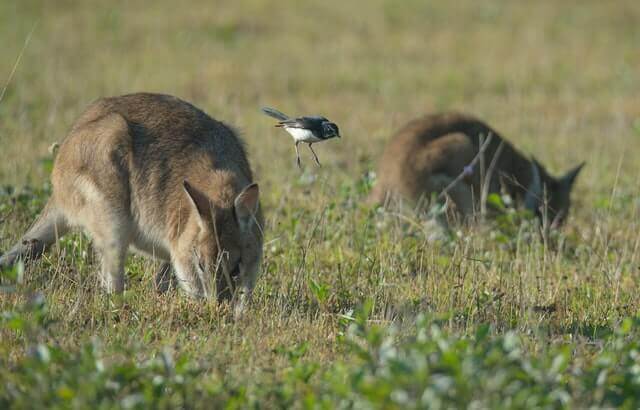 Kangaroos are not the only marsupials that eat grass. Their twin-like relatives, wallabies, also mainly eat grass. Wallabies will sometimes eat vegetables and fruits depending on the season.

Fun Fact: The tail of the wallaby is the same length as its entire body!

Because they inhabit rural areas, wallabies have to cover long distances in search of water and food.

These bipedal grass-eating animals will sometimes congregate in small groups while grazing, even though they are usually solitary.