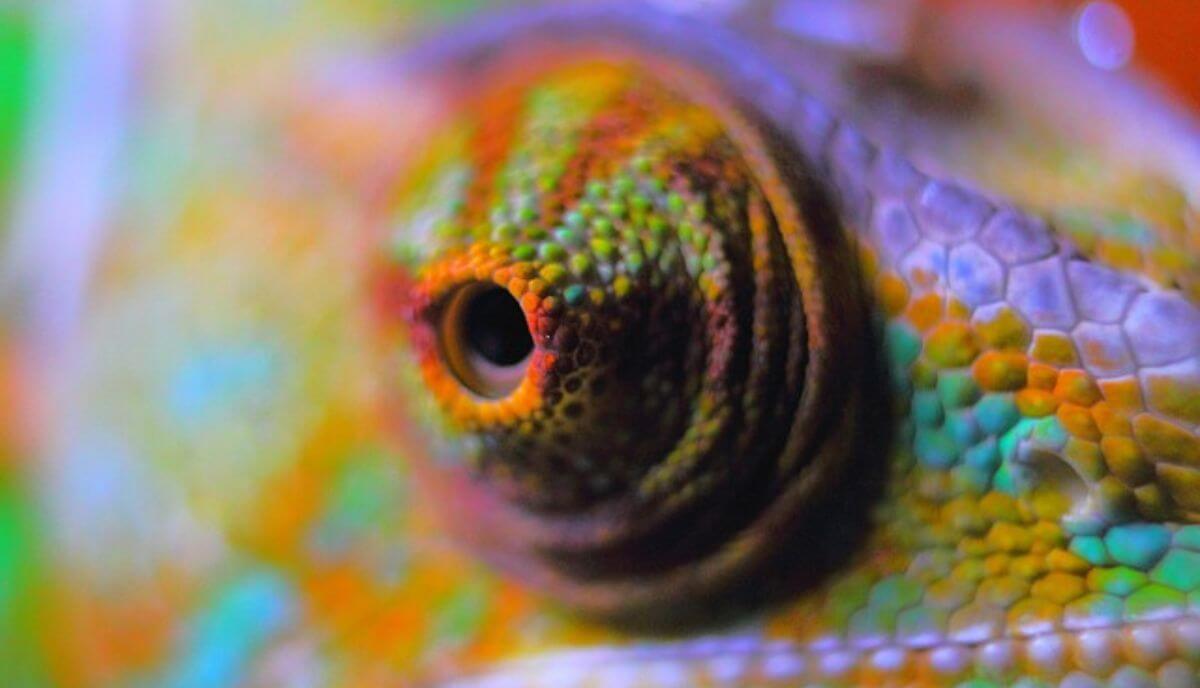 Small animals with big eyes have always been a fun topic to discuss. But have you ever wondered why some animals have such big eyes?

According to biologists, larger eyes are more effective at capturing light and offering sharper vision. This is particularly important for nocturnal creatures.

The large eyes of some of these tiny animals are not only essential for survival, but they are also adorably cute. This is why I came up with a list of the top ten most fascinating ones. 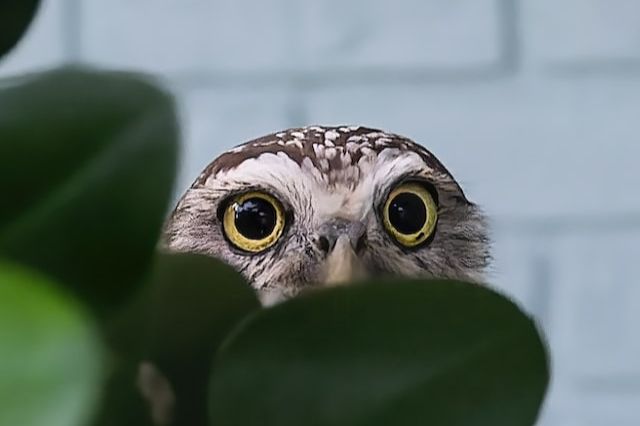 Found in Europe, Central Asia, and Northern Africa, these little owls are exceptional hunters, just like their larger cousins. An adult little owl grows to a full length of 8.7 inches and weighs an average of 6.3 oz.

But despite their small body size, a little owl’s eyes make up about 5% of their body weight.

In comparison, the eyes of humans take up just 0.0003% of body weight.

Little owls’ eyes are front-facing, 3D visionaries. At night, their large eyes capture a large amount of light, giving them impeccable sight, almost next to none. 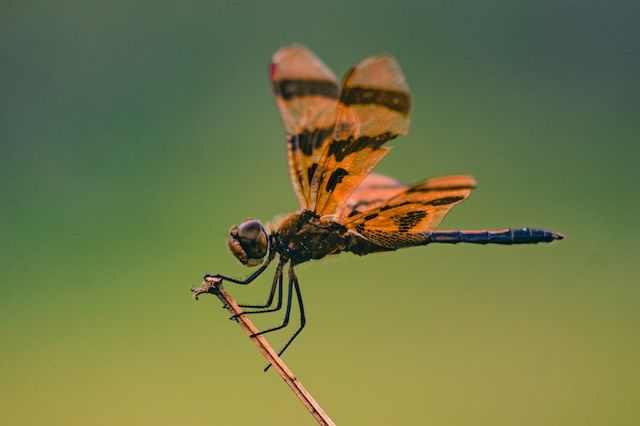 Dragonflies are tiny flying insects but have big eyes for animals their size.

A blue emperor dragonfly, for instance, weighs about 0.02 – 0.03 oz and is 3.1 inches long. But its eyes are almost a quarter the size of its entire body!

Imagine having snow goggles for eyes but three times the size.

A dragonfly has two big eyes with 30,000 lenses in each eye and three normal eyes with a simple lens, giving them impeccable motion sensitivity.

Male dragonflies use colors to differentiate females from males, which are essential for the mating season. Interestingly, females have a unique technique that disguises them as males if they are not in the mood for mating. 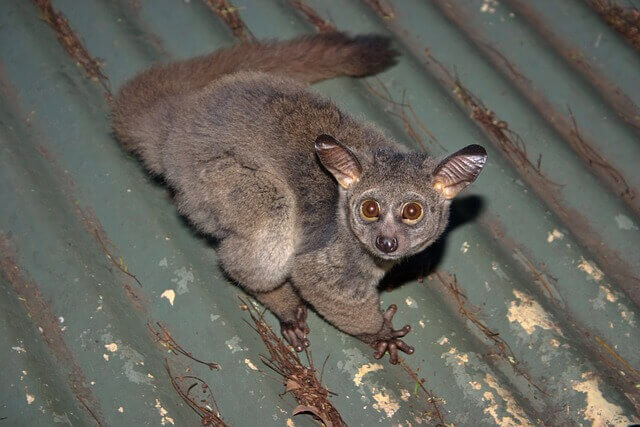 These small mammals are found in the forests of Sub-Saharan and East Africa. They are nocturnal animals that spend most of the day sleeping, only waking up at night to hunt.

Bush babies have enormous eyes that barely fit in their eye sockets, preventing them from rotating. However, they can turn their heads 180 degrees, which gives them a wide field of vision.

They’d have to turn their heads to change their line of vision. This is why bush babies have evolved to rotate their necks to see backward, over their shoulders.

Despite all that, a galago’s vision is not as developed as in other nocturnal creatures. In fact, among all primates, they rely the least on vision. 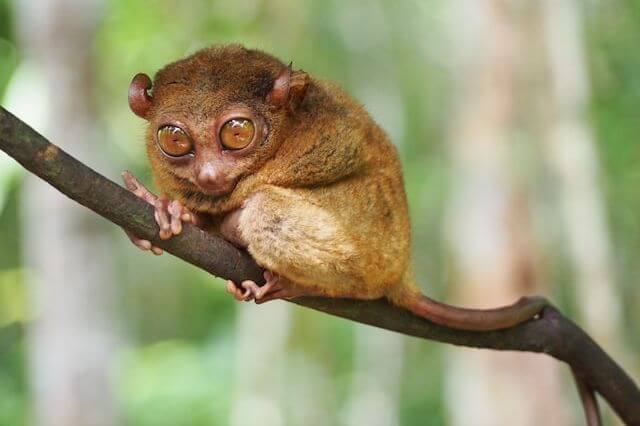 Tarsiers are some of the smallest primates in the world, weighing up to 5.64 ounces and growing no more than 6.30 inches.

However, they have the largest eyes of all mammals relative to their body size.

The eyes of tarsiers are as large as 16 mm in diameter, which is as big as their guts or even their brains. A tarsier’s eye is bulky and so large that it can barely rotate in its socket.

But just like the galagos, they can turn their necks an impressive 180 degrees, which makes up for their static eyes.

However, unlike their primate cousins, tarsiers have high visual sharpness and superb nighttime vision, which helps them catch insects under dim light. 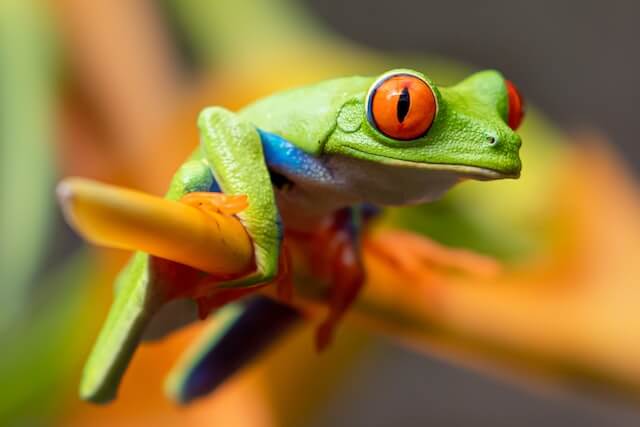 Tree frogs are brightly colored small animals with huge eyes that can be found all around the world except in Antarctica.

As small-sized animals, they spend most of their time being wary of predators and trying to evade them. The primary protection method is camouflaging. But in cases where this fails, they have backups in place of their “poisonous eyes.”

This defensive mechanism is also known as startle coloration – and it is quite a handy adaption.

In addition, because their eyes are placed on the top of their heads, tree frogs have a range of vision of almost 360 degrees.

Also, these amphibians get to pop their eyes above water, scanning their environment for possible danger while the rest of their bodies are submerged in water.

It is not unusual for fish to have large eyes. However, four-eyed fish not only have enormous eyes, but their eyes are also very unconventional for those of a fish.

Despite their name, four-eyed fish don’t have four eyes. Instead, they have a set of two eyes divided into two parts.

Four-eyed fishes have their eyes situated at the top of their heads, adapted for their surface-dwelling lifestyle. As such, these fish swim close to the surface while their bodies are submerged underwater.

The upper part of their eyeballs is on the surface, monitoring the area above the water, while the lower part scans the surroundings below the water. 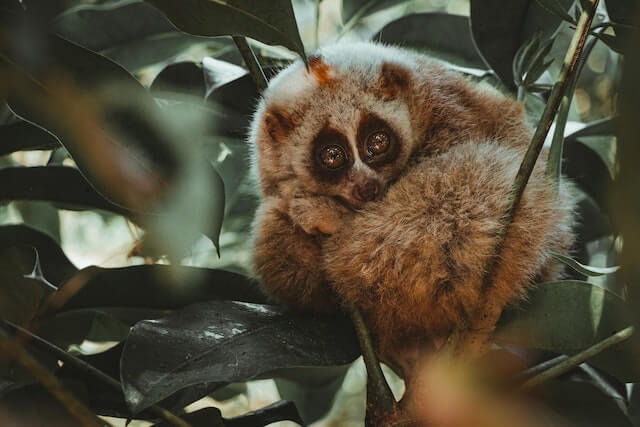 There are seven species of slow lorises, and they are all widespread across south Asia and south East Asia. These tiny animals with big eyes can grow to 7.1 – 15.0 inches in length and can weigh 9.3 – 74 oz, depending on their species.

Despite being small in size, slow lorises have one the largest set of eyes of all primates.

Slow lorises have front-facing, stereo-visionary eyes. In addition, their eyes have an in-depth sharpness, which allows them to see far out and in almost complete darkness.

As creatures that are most active at night, vision is essential as they rely on it to track and hunt prey in the dark successfully. 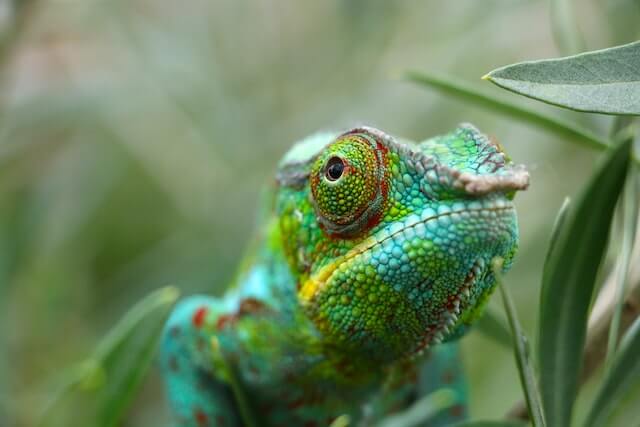 A chameleon camouflage game goes unbeatable, but so does their vision. The deserts and rainforests of Africa are home to these masters of disguise.

A chameleon’s vision is as good as a professional camera sporting a magnified and high-resolution image.

Thanks to their unique anatomy, chameleons can see their environment at 342 degrees, only having a blind spot behind their heads, each eye moving dependently of one another.

However, all these incredible eye qualities are only useful to the chameleon during the day. Chameleons have impeccably bad eyesight in the dark.

Still, unlike most animals, these reptiles can see more colors than humans.

Zebra back spiders, also called zebra jumping spiders, are small arachnids with black and white spots on their bodies.

These small animals have 8 eyes, of which 2 are front facing and large. This enables them to have a whopping 360 degrees view of their surroundings!

Unlike most animals on our list that have static eyes, zebra back spiders can swivel their eyes in all directions, zoom in, zoom out and focus.

The front-facing eyes are used to focus on prey or objects, and the remaining six situated at each side of their head are used to track prey as well as for surveillance.

North Asia, North America, and Europe are all home to zebra back spiders. They can be found around areas where people live. 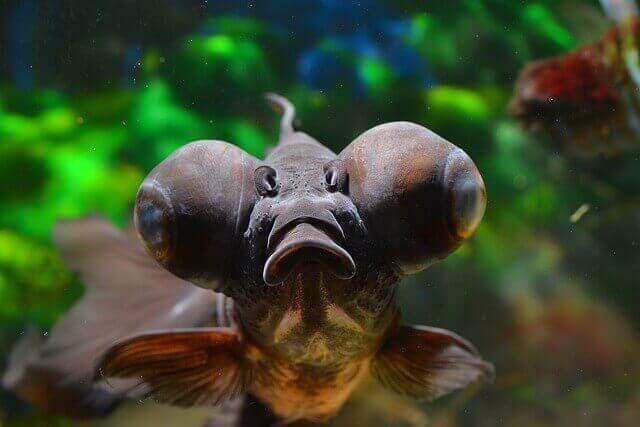 The last members on our list of small animals with big eyes are Telescope goldfish. Being very popular pets recently, these fish are usually no longer than 5 inches, but some individuals can grow large.

One of the most interesting things about telescope goldfish is their eyes.

They have big, really big eyes, which is how they earned their names. Now, you’d probably think that such huge eyes mean great vision. Well, not really.

Besides bad vision, their swimming abilities are also pretty weak, which is why these big-eyed fish require extra care if kept as pets.