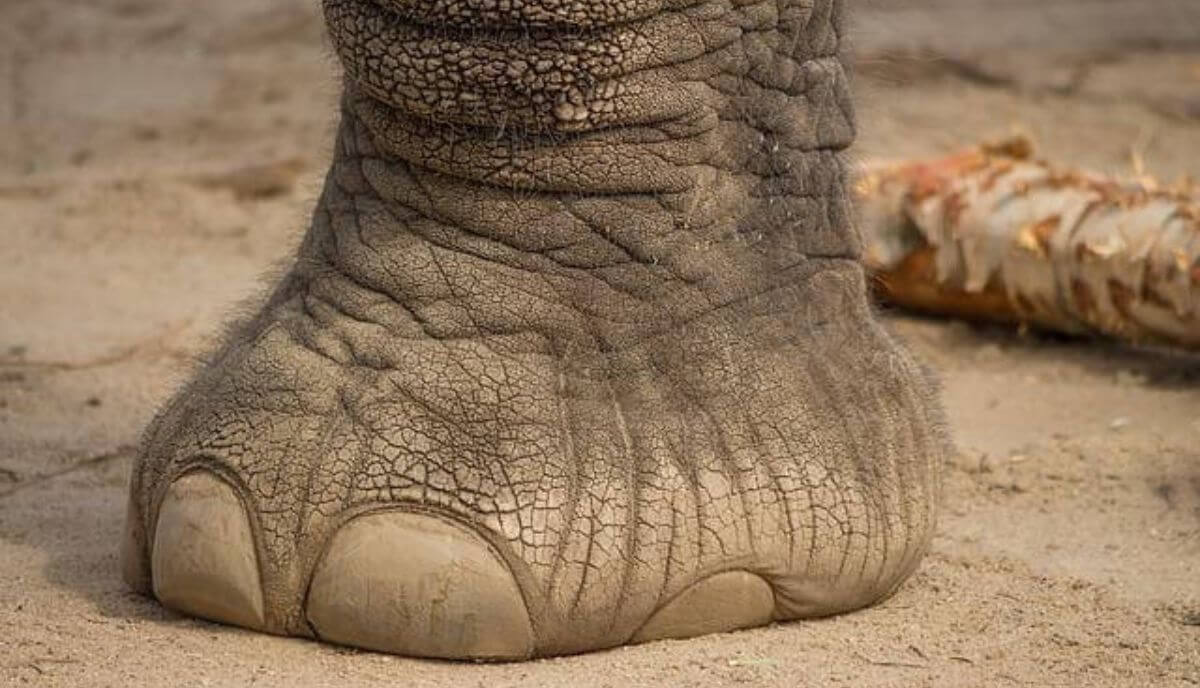 Our planet is full of unique animals. Some creatures have big ears, others are big-nosed, while some have large feet.

Now, some animals have big feet thanks to their large size, such as elephants and ostriches. On the other hand, others have a huge foot size compared to their body proportions.

Let us get to know these animals with big feet on this list! 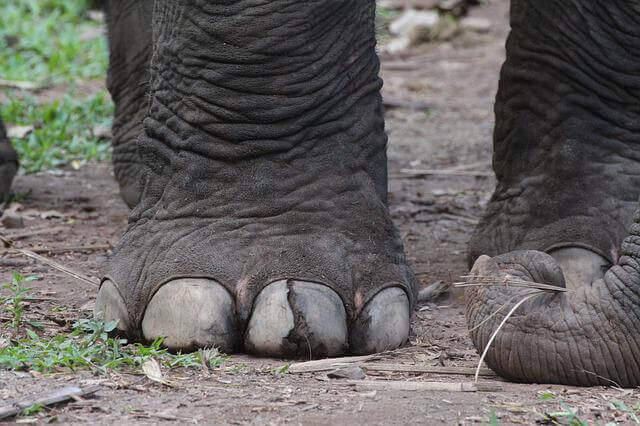 Elephants are the largest land mammals on the planet, found in Africa and Asia. The only difference between the two is the latter is smaller.

To carry their massive weight, these animals have big feet and powerful legs. An average elephant has a foot size of 15 to 19 inches.

It may sound small, but the circumference of the elephant’s foot is more than four feet (almost the same height as a young child).

Elephants’ feet have five toes, but not each of them has nails. The purpose of nails is to protect fatty tissue within their feet.

In addition, elephants’ feet have ‘cushion pads,’ which distribute their enormous weight.

Interestingly, elephants will also use their feet to communicate with each other. They stomp on the ground to send out vibrations to nearby family members. 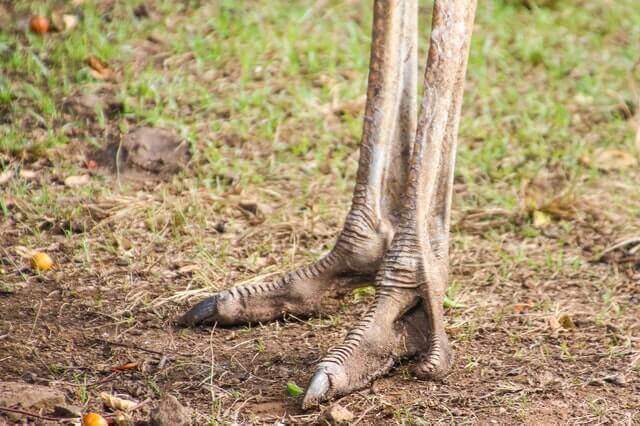 Ostriches are the largest birds, and they are flightless. Most of them are found in the African plains and woodlands.

On average, adult ostriches weigh between 140 to 309 pounds. In addition, these big birds can reach speeds of up to 43 miles per hour.

Their agility came from their springy steps. Ostriches can generate twice the human power thanks to their elastic energy stored in their tendons.

Besides their long legs, ostriches have massive feet that can grip comfortably on uneven terrain, helping them to run efficiently.

Interestingly, ostriches are the only birds with two toes.

The larger toe supports the weight of the bird, while the smaller one balances the bird while running. 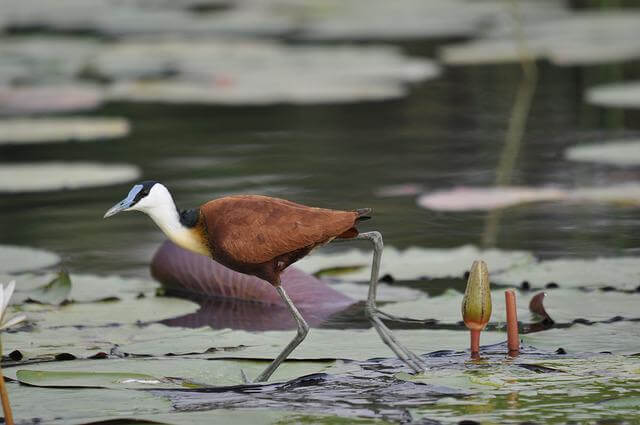 Unlike some other animals in this list, jacanas have big feet compared to their body size. Well, technically, their toes actually make their feet look big.

Jacanas are found in swamps, shallow lakes, and lagoons. They are native to the Americas, Australia, Asia, and Africa.

These big-foot birds have up to 3 inches long toes, which help them walk on lily pads, spreading their weight equally on the surface.

This adaption is essential for the bird since it spends most of its time hunting insects and fish on the water.

From afar, jacanas look like they are walking on water, hence their nicknames “Jesus birds” and “Lily trotters.”

Out of all animals with big feet from the list, jacanas have the largest feet in proportion to their body size. 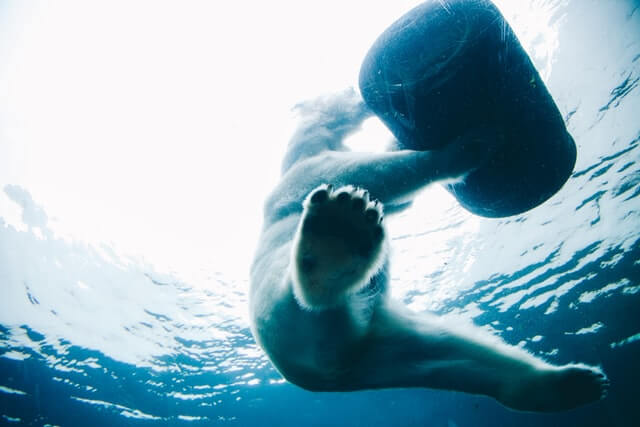 Being some of the largest bears, Polar bears are very dangerous animals native to the Arctic region. They stand up to 8 feet and weigh around 990 pounds.

These white bears can still dash toward anyone at a speed of 25 miles per hour, thanks to their big feet, which supports their massive weight.

Like all bear species, Polar bears have five toes in both front and hind paws.

In addition, their paws serve as snowshoes, spreading the bears’ weight as it moves around ice and snow. It also helps that their feet are partially webbed for better weight distribution as well for swimming.

Polar bears have non-retractable claws, which also come in handy when running, climbing, or catching prey.

Jerboas are small creatures found in hot areas of North Africa, Europe, and Asia. These rodents’ diets are composed of desert vegetation.

Although tiny, with a height up to 5.9 inches, jerboas have large feet in proportion to their bodies. So, it is no surprise that jerboas have the nickname hopping desert rodents, thanks to their giant feet and long legs.

This jumping animal has the ability to hop up to 10 feet, almost 200 times its height. They usually use their incredible jumping capacity to travel swiftly or to avoid any threat they detect.

Apart from their powerful hind legs, jerboas have tiny front legs, which at first glance, look useless. In reality, the front legs play an important role in balancing the animal while jumping (along with their long tails). 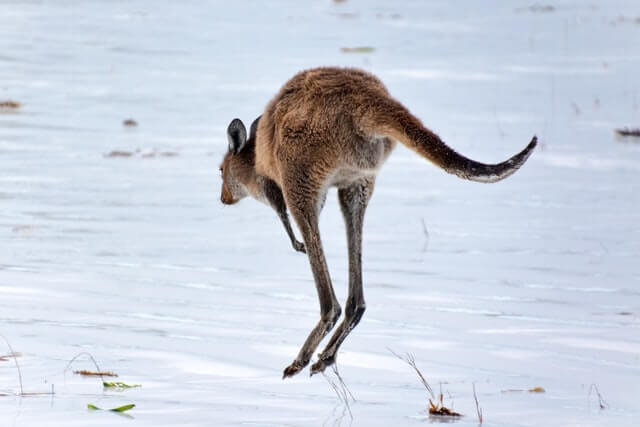 Kangaroos are giant marsupials living in Australia, Tasmania, and nearby islands. They live in a variety of habitats, such as forests, woodlands, plains, and savannas.

Kangaroos are the largest specie in the marsupial family; they weigh up to 200 pounds and can reach heights of up to 8 feet.

Of all the animals on the list, kangaroos are probably the most well-known animals that have big feet. They belong to the Macropod family, which, when translated, means “big foot.”

This physical adaptation helps the animal move from one place to another by hopping or bouncing. As a result, their extraordinary physical characteristics allow them to jump as high as 30 feet.

In addition, kangaroos use their large feet as main weaponry against predators but also to fight with other kangaroos. Their front legs are smaller and less developed, primarily used for cleaning. 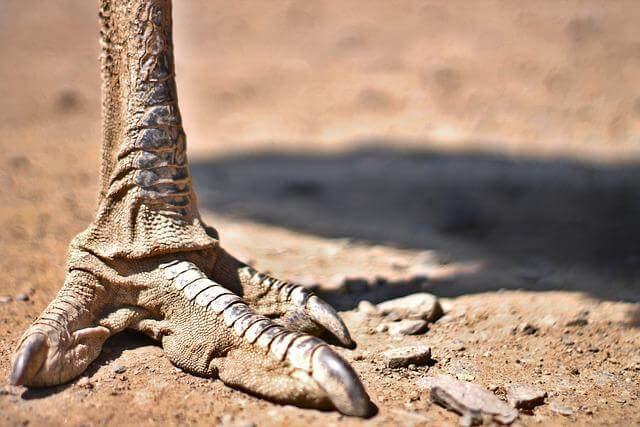 However, unlike ostriches, emus have three toes on both feet, each having a razor-sharp talon.

Being large birds, emus also have big feet, growing up to 12 inches long. Interestingly, besides their lengthy feet, emus have the strongest calf muscles of all birds.

As a result, if they are in danger, emus will make use of their powerful legs to kick and ward off their enemies.

In addition, these powerful birds can run up to 31 miles per hour. Moreover, emus are also fantastic jumpers, able to travel seven feet per stride.

Snowshoe hares, also known as varying hares, are commonly found in North America. They acquire the snowshoe name because of their large, long hind feet.

These rabbits evolved to have extraordinary-sized feet to prevent them from sinking on snow while hopping. It also makes snowshoe hares excellent swimmers.

Although with a pair of large feet, snowshoe hares are agile animals. They can hop up to the speed of 27 miles per hour. Their legs and feet are also powerful, allowing them to jump as high as ten feet.

These hares have another interesting adaptation – they change fur color every season. Once the spring begins, they shed their white fur for brown fur.

And when autumn arrives, their fur starts shedding the brown fur in preparation for the growth of the white coat.

These exceptional traits are helpful for snowshoe hares’ survival against their predators, such as lynx and great-horned owls. 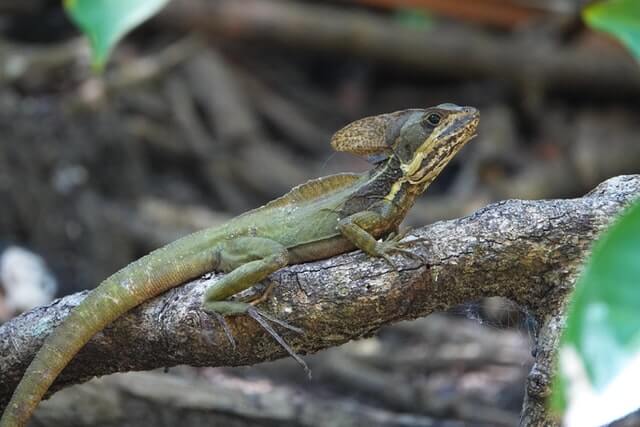 Water-running basilisk, also known as basilisk lizards, is one of the unique animals with the ability to walk on water. These reptiles are found in the tropical forests of Mexico and South America.

Since it can walk on water, a basilisk lizard is also known as the “Jesus Christ lizard.” This fantastic ability comes thanks to the long toes in their rear feet.

Water-running basilisk lizards’ toes have fringes of skin that allow the water to spread out, increasing the surface area of the foot once it touches the water.

Instead of walking, basilisk lizards slap their feet hard on the water. However, they can only walk on water for several yards before they submerge underwater.

American coots are another interesting creature with big feet.

These water birds frequently inhabit large ponds, lakes, and slow-moving rivers. Most of these locations are found in lower elevations.

People usually recognize American coots for their full-black feathers and white beaks. But, when they swim, they look like ordinary ducks.

They do not have webbed feet and may look odd with their toes. However, having toed feet help them to be able to walk on different kind of surfaces, including mud, grass, and ice.

Unlike the other birds mentioned, American coots have four toes, three of which are in front and the other in the back.

And there you have it, with this, we conclude our list of animals with big feet. While some of the creatures are just large in general, others are small but have big feet in comparison to their body size.

Out of all animals, ostriches wear a crown of having the biggest feet. However, in proportion to body size, jacanas are the animals with the largest feet on the planet.

Thank you for reading. If you liked this article, here’s a recommendation of another popular read: Animals That Have Big Ears.