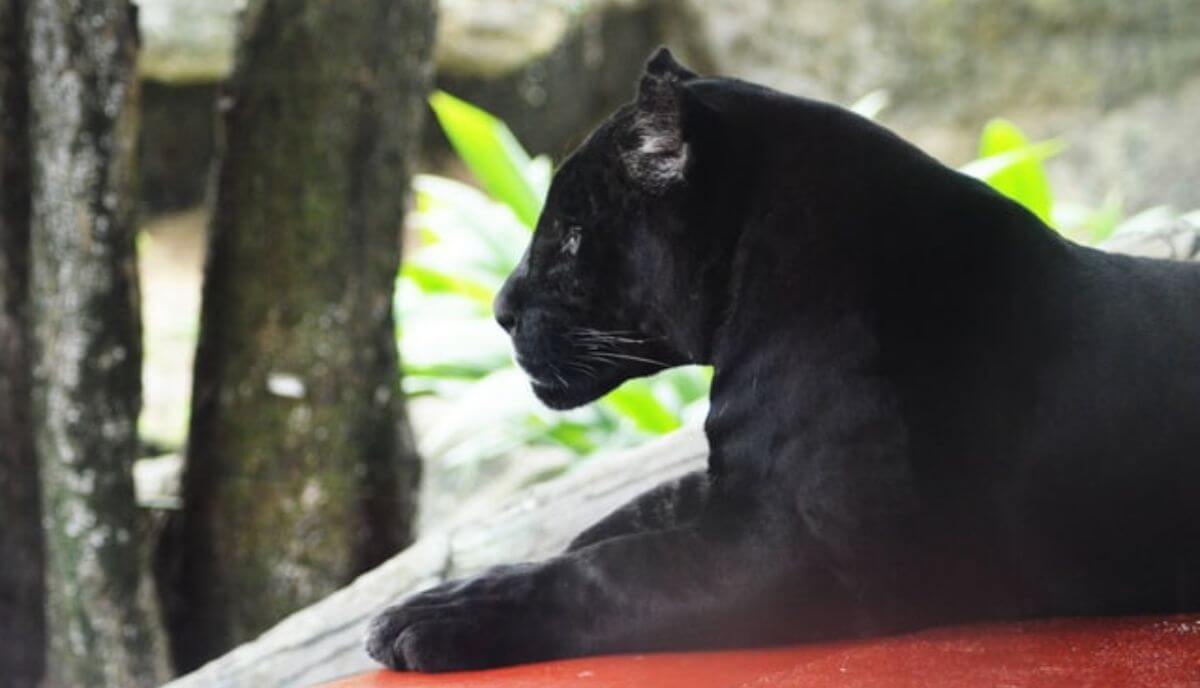 Can you own a pet panther? Depending on where you live, legally, the answer may be yes. Should you own one as a pet, though? Almost certainly not.

Panthers may be mesmerizingly beautiful but are also powerful, endangered, wild predators, not housecats.

However, if you want to learn more about keeping a panther as a pet, in which states it is legal to own one, and how much it would cost – you are in the right place!

Can You Have a Pet Panther?

Yes, you can have a pet panther in some places, but that doesn’t mean it’s a good idea. Keeping this big cat as a “pet” obviously comes with more than a few risks and, therefore, responsibilities.

Panthers require a large amount of outdoor space in which to run, trees to climb, and logs on which to sharpen their claws. However, they also need to be kept securely.

Did you know that a panther is not actually a real species? The term “panther” is generally used to describe either a black jaguar or a black leopard. While they may look similar, these two animals have several significant differences.

For one, leopards are found in Africa and Asia, whereas jaguars live in Central and South America. Both are powerful ambush predators, but jaguars are stockier and stronger.

Either way, owning such a dangerous and wild predator (be it a black jaguar or a black leopard) that wanders around the neighborhood and does as it pleases (which may very well be eating the neighbor’s dog) is not a wise idea.

Building an enclosure capable of holding such a super-agile master of stealth as a leopard or jaguar is a) difficult and b) expensive, as is providing them with an appropriate diet.

Panthers are hypercarnivores, meaning they eat only meat. They require large amounts of high-quality raw meat, bones, and carcasses in order to remain healthy.

And if they ever do get sick, they need a visit from a specialized wildlife vet, and treatment is likely to be hard to find and very expensive.

Another important consideration is whether a panther wants to be owned as a pet.

Is it fair to keep these beautiful creatures in a cage?

Despite what many panther owners may say, it’s probably not.

Panthers have evolved to live and behave in specific ways, almost none of which are possible in captivity.

Related: Are Panthers Dangerous to Humans?

Is it Legal to Own a Pet Panther?

Most countries have outlawed owning panthers as pets, but there are still some places where it is legal. In the United States, certain states, such as Alabama, North Carolina, and Oklahoma, have few to no laws regulating panther ownership.

Owning panthers as pets is legal in some Asian and African countries, such as Thailand, Pakistan, and South Africa, in some cases, without a permit.

Until recently, many countries in the Middle East allowed exotic pet ownership, and many people did it as a sort of status symbol.

In the last few years, however, most Middle Eastern countries, such as UAE and Saudi Arabia, have outlawed the practice, but this does not stop illegal breeding and trade from happening.

Can Panthers be Domesticated?

No, panthers can’t be domesticated, at least not any time soon. Domestication is a process that takes many, many years of selective breeding, even with naturally docile animals. Panthers are decidedly not docile and definitely not a good candidate for domestication.

It has been argued by many exotic pet owners that panthers can be “tamed”; however, this, too, is untrue.

Wild animals like panthers retain their natural instincts, regardless of how they are raised. This is not to say that they are incapable of forming a bond with their owners, though.

If panthers are raised from a very young age around people and are treated with proper respect and guidance, they can, and do, develop strong bonds with those people. In such cases, panthers are unlikely to turn on their owners, but it can still happen.

Panthers are highly efficient ambush predators. They have evolved heightened senses and lightning-fast reactions, which help them capture prey.

Sometimes, these reactions can be triggered accidentally in captive panthers, particularly if they are not allowed to hunt (which pet panthers almost invariably aren’t).

A small child running around screaming might behave and sound like a panicked prey animal to a frustrated panther in captivity.

An angry owner trying to take a thanksgiving turkey off an opportunistic panther might wind up with more than just a scratch from its razor-sharp, 2-inch long claws.

On a scale of fluffy Labrador puppy to a great white shark, panthers probably fall somewhere in the middle. In other words, it could be worse, but don’t do it.

1. Owning Panthers as Pets is Dangerous

They are built to be good at it, physically and mentally. If a pet panther decided to hurt someone at any point, there would be little anyone could do to stop them, particularly because they can inflict an awful lot of damage very quickly.

Even if they are playing, panthers can get carried away and accidentally hurt someone.

Moreover, while they are undoubtedly capable of bonding with their owners, they are unlikely to be safe around strangers, small animals, or children.

2. Keeping a Panther as a Pet is Expensive

Panthers are extremely expensive, not just to acquire but for the rest of their lives.

Some of the basic costs include safety-proofing your home, building a suitable outdoor enclosure, feeding an appropriate diet, vet bills, and treatment.

Not to mention potentially covering a lawsuit for when your beloved pet eats the neighbor’s dog and/or grandmother.

Having a pet panther will cost you an awful lot of money.

Panthers belong to the wilderness, and they do not do well in captivity conditions.

While it’s true that many pet panthers are well-loved and not unhappy, it’s also true that they are not being allowed to live like they naturally should.

In captivity, they are deprived of doing almost everything they have evolved to do, such as hunting, exploring their vast territories, mating, and raising young.

Even in the best of homes, many panthers may become frustrated, bored, and confused.

In the worst of homes, they suffer, and, despite regulations, this is difficult to police. Many pet panthers are simply abandoned when owners realize how difficult they are to keep.

Panthers are listed as endangered animals, mainly due to habitat destruction or illegal hunting.

In fact, the exotic pet trade contributes to their dwindling numbers in the wild, as many “pet” panthers are wild-caught.

Poachers often kill wild mothers in order to capture and sell the cubs as pets. Even legal breeders are often poorly regulated, resulting in health issues and low genetic diversity in captive populations.

Owning an endangered animal and contributing to these issues is simply unethical.

How Much Does a Panther Cost?

A LOT. Buying a panther cub in the US can easily cost a few thousand dollars, which is the cheap part. Feeding alone generally costs around 8,000 to 10,000 USD per year.

Then there are the building costs you’ll accumulate for safety-proofing your home and building an outdoor enclosure, vet bills, transportation requirements, permit and insurance costs, and panther-proof toys to stop them from tearing up your house out of boredom.

Big Cat Rescue, an organization dedicated to caring for abandoned pet big cats, estimates that owning an animal such as a panther will cost around 100,000 USD in the first year of ownership and over 10,000 USD every year afterward.

So, should you have a pet panther? No, clearly not. These beautiful animals are not meant to be kept in homes and cages, as they are too wild, dangerous, and endangered.

In a world where so many animals have evolved to live with humans are being killed in shelters because they cannot find a home and cannot be released into the wild.

So, is breeding panthers a good idea? Most likely, no.

If you want a graceful and majestic predator in your home, one that will not accidentally kill you, adopt a cat.

Thank you for reading. If you liked this article, here’s another popular read: A pet lion – is it possible?