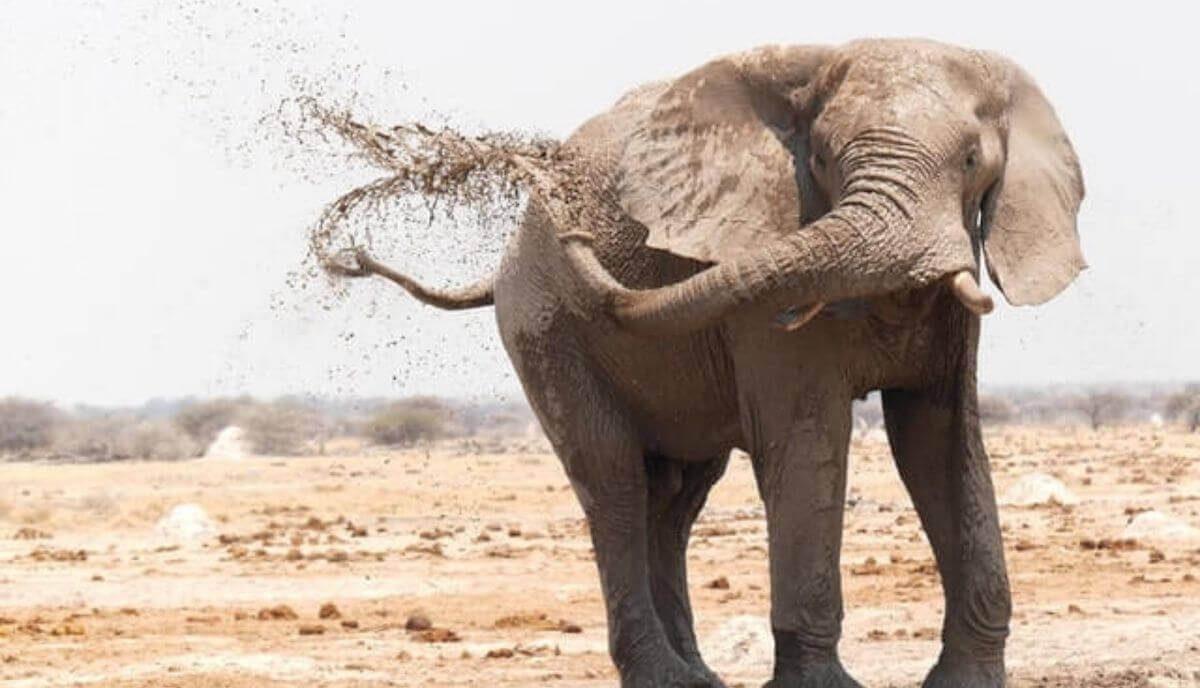 Elephants are legendary creatures native to Africa and Asia that live mainly in regions with tropical to sub-tropical climates. They live in a small matriarchal herd that usually comprises females and their young.

By being the largest land mammals on the planet, one may wonder – do elephants eat meat?

No, elephants do not eat meat, as they are strict herbivores. This means their regular diet is based on plants and vegetation. An elephants’ favorite food includes twigs, barks, leaves, roots, and fruits. However, a very small portion of their diet consists of insects they pick up while eating plants.

Elephants are not carnivores. Carnivores are animals that eat meat. And, unlike elephants, carnivorous animals are predators, and they hunt other animals for food, while some species scavenge the leftovers of the main hunters. Elephants are not predators nor carnivores.

The physical structure and the digestive system of carnivores are adapted to effectively hunt and digest all the meat they consume.

Carnivores have sharp claws they use to get a grip on their prey and sharp teeth to kill as well as tear flesh. Their digestive systems are also highly acidic, which helps to kill any bacteria or pathogens that may be in the meat they eat.

Elephants do not hunt or scavenge for their food. As herbivores, they graze and browse for vegetation to eat.

Their feet do not have claws and their teeth are more rounded to grind the fibrous material of the plants they feed on. Their digestive systems have several chambers to facilitate the efficient digestion and absorption of nutrients from the food they eat.

No, elephants are not omnivorous. Omnivores are animals that eat both plants and meat. The elephant diet is based around plants only, consequently, they are not considered omnivores.

Omnivores are found all over the planet, in the air, on land, and in the sea. They will hunt or scavenge for meat, as well as graze on a variety of plants. Each omnivorous species has a diet that is unique to it.

Omnivores will feed on whatever food source is available and as a result, the digestive system of omnivores is adapted to support the digestion of both plant fiber and meat.

Omnivores come in a variety of shapes and sizes, from the large Kodiak bear found in Southwestern Alaska to the tiny ant that is found all over the planet.

The term vegetarian is largely used to describe a dietary preference in human beings. In the animal kingdom, a different term is used to describe animals that eat vegetation. Therefore, it is not accurate to define elephants as vegetarian even though their diet is strictly plant-based.

The appropriate term to describe the type of diet an elephant subsists on is, ‘herbivore’. An elephant’s diet consists of plant leaves, shoots, twigs, fruits, flowers, and even tree bark. Its digestive system is adapted for the consumption and digestion of plant life. In the case of an elephant, up to 150kg (330 pounds) per day.

An elephant’s teeth are flat, which enables them to efficiently grind down plant fiber as it chews. They will eat by using their trunk in a pinching motion to pluck leaves, fruits, flowers, and twigs and put them in its mouth. Additionally, when elephants need to eat bark, they will use their tusks to rip the bark off tree trunks.

Why Are Elephants Herbivores?

Elephants are herbivores because their diet consists only of plants. They do not eat other animals, and neither do they eat insects. If insects are found in the digestive tract of an elephant, it would likely be because a plant they had consumed may have had some insects crawling on them; for example, termites on the bark of a tree.

The physical structure of an elephant is adapted for this kind of diet. Elephants do not have clawed feet, and they do not have sharp teeth so they do not hunt for their food. They are not predators, but they are occasionally preyed upon by carnivorous animals.

The diet of an elephant is also determined by the environment it lives in, which is further affected by the seasonal changes of the area. Because elephants feed on a very wide variety of plants, they will usually have plenty to eat unless there is famine.

Related Article: How Strong Are Elephants?

In Conclusion – Do Elephants Eat Meat?

Elephants do not eat meat. As a species, they are herbivorous. They feed on a variety of fruits, leaves, twigs, grasses, roots, and the bark of trees. Further, their digestive system is adapted for the plant-based food they consume.

Omnivores are animals that eat both plants and meat, whereas carnivores subsist on a meat-based diet. Elephants are not omnivores, neither are they carnivorous. Since their diet is plant-based, in a sense, elephants may be termed as vegetarian, although that would be an inaccurate description.

In the animal kingdom, an animal’s diet is pre-defined by nature. Different animals may adapt their feeding to their environment and often famine and drought may cause a species to make a temporary change of diet in order to survive.