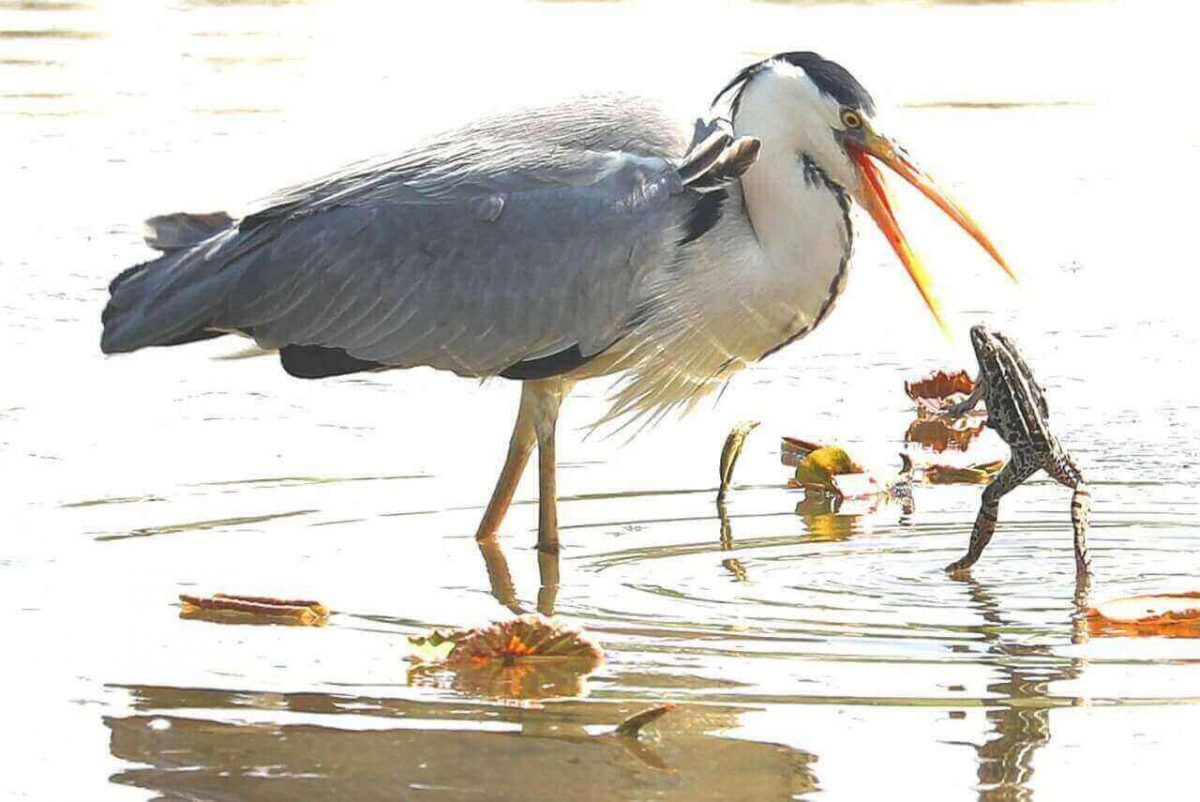 Depending on the time of the year and on the bird, they eat different kinds of food. From fruits to insects, other birds, and even small mammals.

But in case you wonder if birds eat frogs, here is the answer:

Birds do eat frogs, yes. Depending on the species, some birds eat frogs as a big part of their diet, while others do not eat frogs as frequently. Bird habitat is also another huge factor that affects how often do birds eat frogs. Frogs that share the natural environment with birds more regularly end up as their food.

In this article, I am going to talk more about birds that eat frogs. How do they catch frogs, and will bird eat poisonous frogs? Finally, we are going to see how frogs defend themselves and what are some other frog predators.

For birds that eat meat as a part of their diet, frogs come as a decent meal.

Frogs are rich in protein, in terms of nutrition value, very similar to fish. Thus fish-eating birds would gladly substitute frogs for fish anytime they get the chance.

Although many birds relish eating frogs, no bird is exclusively feeding on frogs only. Usually, the birds that feed on frogs would eat lizards as well.

Some birds even became real experts when it comes to catching and eating frogs.

Depending on the birds, there are three main ways of catching the frogs.

Some birds have dive and capture tactics, others hunt from the ground, and some birds attack frogs from the sky. Different birds also use different parts of their body to catch their meal, and so their success may vary.

Herons are pretty successful, and they have a unique way of hunting frogs and other prey.

Herons would stay motionless with endless patience, waiting for the frogs to appear, and then throw lighting fast strike, piercing its beak through the frog’s body.

Different types of birds that live near or in water regularly catch and eat frogs.

Birds such as geese, swans, ducks, herons, egrets, and wading birds, among many others, will eat frogs whenever they get the chance to do so.

Birds of prey, including eagles, owls, and hawks, are also seen eating frogs, but not as frequently.

Birds do eat baby frogs, yes. Tadpoles, froglets, and baby frogs are attractive snacks for a vast majority of birds.

Knowing that baby frogs are more vulnerable and have less defensive experience, they are often preyed on by birds.

The life cycle of frogs is quite interesting. It includes four different stages and metamorphosis.

Tadpoles hatch from eggs, and after around six weeks, their body starts to shrink. Their legs also start to form, and they transform into froglets.

Between 12 to 16 weeks since the hatch, froglets start to develop lungs, their back legs are grown, and then we get a baby frog. (source)

Due to the plenty of enemies, less than 1 percent of tadpoles survive until young froglets. And even fewer gets the chance to become a baby frog.

No, birds do not eat poisonous frogs. In the wild, poisonous frogs are also known as dart frogs, and many predators, including birds, avoid eating these kinds of frogs.

Most poisonous frogs have bright colors on their bodies, making themselves aposematic.

Aposematic is basically a message to potential predators that the frog is not worth eating or killing – due to its toxicity or venom.

These poisonous frogs live in tropical regions of Central and South America. And according to Wikipedia, their toxicity comes from their diet.

Bright colors such as red, blue, yellow, and black are no-no signs for a variety of tropical frog-eating wildlife.

Birds usually do not eat frog eggs. Frog eggs are tiny, and the majority of birds do not take part in eating eggs. Simply because frog eggs do not provide enough food sources.

On the other hand, insects and water bugs are the main predators of frog eggs. Dragonflies, leeches, newts, diving beetles are commonly seen feeding on eggs.

Frogs have a lot of predators in the wild. Many animals eat frogs, in fact, every carnivore creature that can catch a frog – will eat it. Besides birds, which are frog’s main predators, snakes, weasels, otters, badgers, raccoons are some of the animals that often eat frogs.

Some of these predators eat frogs as a staple part of their diet. Others, on the other hand, will snatch a frog only if the opportunity arises.

Either way, frogs are vulnerable to many wildlife predators; and so they had to develop different survival strategies.

How do frogs protect themselves from predators?

Since frogs have to worry about many predators, they protect themselves in a variety of ways.

Some frogs have become very good at camouflaging themselves. Frogs blend in with their surroundings, masking their location. This tactic is one of the main defensive strategies against predators.

Other frogs are great climbers, and so they climb high-up trees, which makes them safe against numerous enemies.

Another protection that frogs commonly use is jumping. Almost every frog species is a great jumper – some frogs can even jump 44 times their body length.

And so, whenever a frog sense danger, it launches itself into safety.

Frog-eating birds exist since the dawn of time. Not many birds eat frogs as a majority part of their diet, however, birds are not the only frog predators.

And to survive, these amphibians had to evolve multiple defensive strategies. Even though frogs lay a great number of eggs, only a few reach the last stage of metamorphosis – becoming the frog.