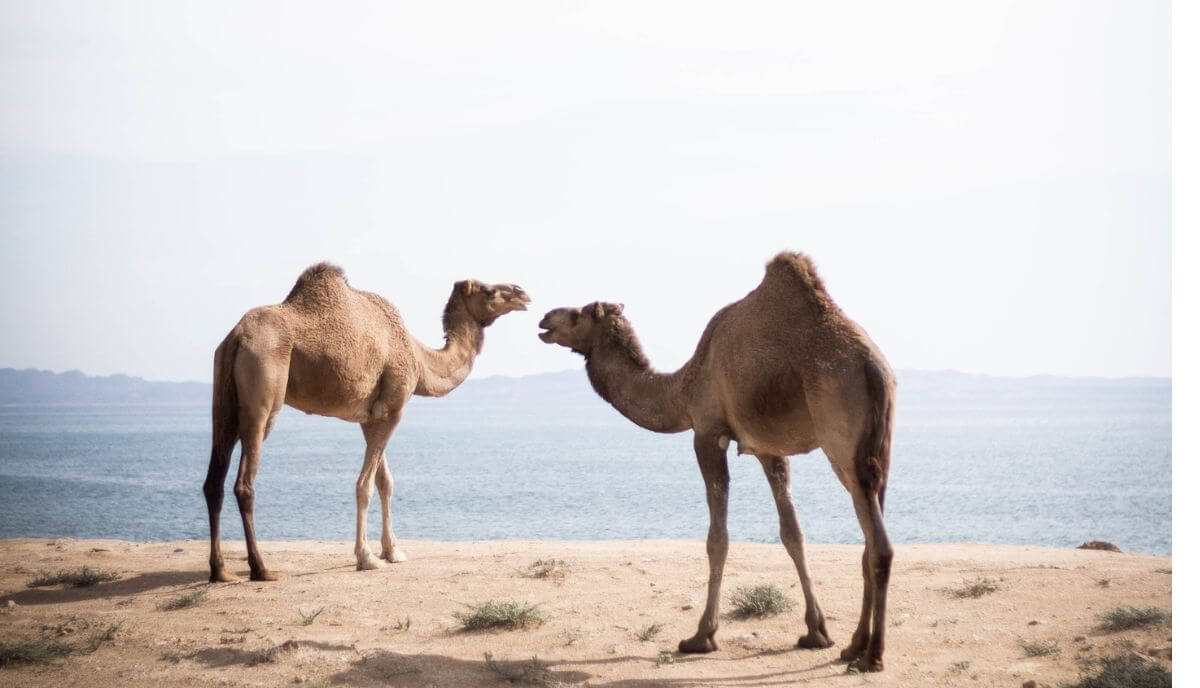 I used to think that there is limited vegetation in deserts. And the heat, water supply, and sand can be a problem for animals.

So, I thought very few desert herbivores could live in such conditions. However, the truth is quite the opposite.

There are many herbivores that live in the desert. Examples of desert herbivores include antelope squirrels, kangaroo rats, desert tortoises, jerboas, and many others.

Now, let us get to know these exciting desert herbivores.

White-tailed antelope squirrels are small desert animals that are active during the day. When looking for food, they make sure to cache food for emergencies.

As for their diet, white-tailed antelope squirrels are not entirely herbivores. However, their diets are 60% greens, seeds, fruits, or nuts, depending on the season.

Other meals these squirrels feast on are arthropods, carrion, and insects. White-tailed antelope squirrels cache their extra food on their cheek pouches.

Although they look like ordinary mice, kangaroo rats share a similar trait to kangaroos. They have pouches, but not on their stomachs.

Kangaroo rats have pouches on their cheeks to store extra meals. To mimic the kangaroo’s vertical jump, these rats have large hind legs. Jumping helps Kangaroo rats to escape their predators.

They are also found in the United States, specifically in drier regions of the west and southwest. Even when they live in dry areas, kangaroo rats have a variety of desert plants to choose from.

The bulk of the kangaroo rat’s diet consists of mesquite beans, seeds, and greens.

Black-tailed jackrabbits are known for their elongated ears and black tint tail. Even with all the fur around their bodies, these rabbits can survive in a dry region.

They are commonly found all over the United States. However, black-tailed jackrabbits are rarely seen in highly-elevated places.

These rabbits prefer to linger on desert shrubs, young forests, and herbaceous habitats.

Black-tailed jackrabbits’ diets are also influenced by the season. They eat shrubs primarily but can shift to herbs.

Living in an arid region, it is surprising to know that these rabbits are not heavily reliant on water. Black-tailed jackrabbits do not really drink water but will drink if they find a drinking spot.

Desert cottontails are also rabbits living in Sacramento Valley, except at the higher elevations. What makes them more distinct from their cousins, the jackrabbits, is that they are abundant all over the area.

They have a high reproductive rate, which makes them also a favorite prey for various predators, such as hawks, foxes, and weasels.

Even with changing seasons, desert cottontails do not migrate. They also have no particular active schedule. Some rabbits are active during the night, while others during the day but are diurnal.

The diurnal ones spent most time hiding in the shade.

Desert bighorn sheep are large desert herbivores. They are pretty threatening to look at even though they are plant-eating animals.

You may encounter them west and southwestern regions of the United States and northwestern Mexico.

These sheep are heavy bodies and stocky, almost the same size as a mule deer. Desert bighorn sheep can weigh up to 280 pounds.

What makes them more intimidating is their curled horns, which they can use to ram. As for their hiking abilities, desert bighorn sheep have unique concave elastic hooves that help them climb steep and rocky mountains.

They can also safely live in the desert because their body temperature can safely fluctuate. During the heat peak, desert bighorn sheep enjoy resting under the shade.

As for their diet, desert sheep enjoy munching on sedges, clover, and grasses.

Small desert jerboas are probably the smallest desert herbivore on our list. These tiny desert creatures are hopping rodents found in North Africa and Asian deserts. They are adorable animals that are sometimes mistaken for mice.

However, small desert jerboas have incredibly long ears and tails. Just like their kangaroo rats cousins, these jerboas have the ability to jump like a kangaroo. It is thanks to their well-adapted legs.

Small desert jerboas eat green leaves and insects. In case of drought or dry plants, they eat the plant’s root, which contains most of the moisture.

They also do not water and rely on plants and insects for hydration. Small desert jerboas can live in deserts as their body can control their temperature comfortably.

To escape the heat and predators, these rodents hide in their burrows. They then spend most of their daytime cooling down and sleeping.

Mouflons are another sheep species on our list. Interestingly, this breed is called the ancestor of all modern domesticated sheep.

Mouflons have reddish to dark brown coats with dark back stripes. Mainly male mouflons develop horns, though some females also have them. Their horns are curved in almost one revolution.

Mouflons are still considered wild animals that only people with a license can hunt. They are under conservatorship to maintain their population.

As for their diet, mouflons love to graze on grass, but sometimes they also eat shrubs and trees.

They are found in almost every habitat, including deserts in Northern Africa and Arabia. Dorcas gazelles are closely related to mountain gazelles, though the former has longer ears and more robust horns.

Dorcas gazelles have also adapted to their desert life and can live without drinking water. Like other herbivores on our list, they eat plants that help them stay hydrated.

The bulk of Dorcas gazelles’ diet is based on leaves, flowers, twigs, bush fruits, and acacia pods. To reach out for trees, they can stand using only their hind legs.

When threatened, Dorcas gazelles make bouncing leaps while they hold their heads high.

The desert tortoise is the most exciting animal to see in a desert. Most people assume that the tortoise is a water animal.

This reptile is native to the Mojave desert, Sonoran deserts, and Sinaloan thornscrub. Although they can live up to 80 years, desert tortoises have a low reproductive rate.

In order to regulate its temperature, the desert tortoise spends its daytime on rock shelters, burrows, and pallets. This also helps the tortoise to reduce water loss in its body.

The desert tortoise’s diet is mostly grass. But on occasion, it also eats wildflowers, herbs, young cacti, and fruits. As for its water intake, this tortoise gets hydration from the greens it consumes.

It will start drinking hastily in any water puddle once it rains. This is to help the desert tortoise to remove solid urates.

The only bird on our list, Gambel’s quails, are plump, short-necked birds found in desert regions of California, New Mexico, Arizona, and Colorado.

They have a distinctive top-knot on their head, which is fuller on males. Gambel’s quails have a rich color pattern of cream, chestnut, and gray.

When looking for food, quails prefer to consume cacti fruits and grasses.

These birds are primarily preyed upon by medium-sized predators, such as coyotes, bobcats, and snakes. Gambel’s quails do not have any defense method to protect themselves. So, they rely heavily on camouflaging around their vegetation.

Camels are probably the most well-known herbivores found in deserts. Since thousands of years ago, these hump creatures have been domesticated and used as livestock.

These creatures are more adapted for such harsh desert conditions than any other animal on the planet. The fact that they can survive six to seven months without drinking a drop of water is absolutely fascinating.