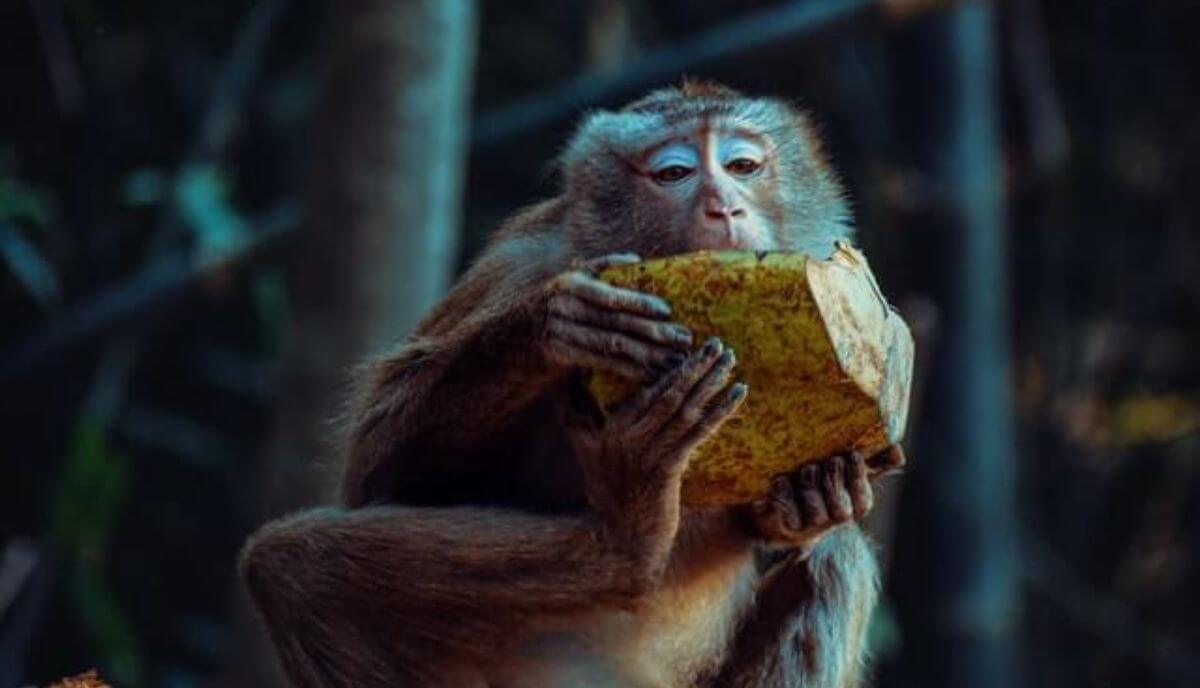 I knew someone who did not try coconuts before. So, it was amusing for her to watch a monkey in a zoo eat the fruit.

She then looked at me and asked, besides humans and monkeys, what animals eat coconuts?. I immediately answered her.

Animals that eat coconuts are usually herbivores or omnivores, including gorillas, aye-aye, elephants, sun bears, fruit bats, coconut crabs, and others. Coconut is a fruit rich in nutrients, perfect for animals living in the wild.

Although it has a strong, hard husk, animals have found ways to access coconut meat and water. Some animals use tools, while others use extreme brute force, sharp teeth, and claws.

Let us learn more about animals that eat coconuts.

Monkeys love fruits such as bananas, mangoes, berries, and figs. Although they usually go for the softer and easily peeled crops, monkeys have shown interest in coconuts.

Monkeys, specifically those found in Southeast Asia like Malaysia and Thailand, eat coconuts for refreshments. They are skilled climbers, so taking coconuts from the top of a tree is easy for them.

Wild monkeys tap the coconut to create a small opening. Besides quenching their thirst, monkeys find a way to access the coconut meat.

They have different methods of breaking open the coconut. One way is using heavy stones they found in their surroundings. These climbing mammals will then use it as a tool to open the coconut.

Coconut meat is a healthy and delicious treat, rich in manganese and copper. Manganese helps regulate sugar, and copper assist in forming red blood cells in the body.

However, not all monkeys enjoy consuming coconuts.

Gorillas are another primates that enjoy munching on coconut meat. They have a large, muscular, and stocky build that makes gorillas look like apex predators.

In reality, gorillas are herbivores and mainly eat bamboo shoots and fruits. The only exception to this all-vegetarian diet is termites and ants.

These large primates have an appetite for coconuts, young or mature. Their love for coconuts makes sense as gorillas do not drink water.

Gorillas get all their necessary moisture from their vegetation. They eat a lot of fruits and greens to quench their thirst.

Besides enjoying coconut-flavored water, gorillas also eat coconut meat. It is undeniable that gorillas have strong arms that can break anything.

These primates can easily crash a coconut even without a tool. Gorillas can also use stone with sharp edges to create a hole in the coconut.

Either way, gorillas have it easy eating and drinking coconut.

Another animal that loves coconut is a nocturnal primate from Madagascar. It is given the nickname half-bat, half-monkey due to its appearance and behavior.

This nocturnal primate is an omnivore, mainly feasting on insects and grubs on trees. Even with their love for insects, aye-aye also finds itself craving seeds, fungi, and fruits.

Aye-aye also finds coconut delicious. Unlike other primates that use brute force or tools to open the fruit, aye-aye uses their incisors.

The primate’s sharp incisors pop open the coconut or any hard fruit and nuts. Besides using it as a coconut opener, aye-aye also utilizes its incisors to gnaw on trees.

By gnawing on the barks of the tree, the aye-aye can expose where the grubs and larvae are hiding. The exciting thing about these specific teeth is that incisors keep on growing.

It seems that the growth of their teeth will not stop soon. Their incisors get worn down, and their body adapts to the change by keeping them growing.

Elephants are the largest herbivores, eating a variety of plant species. They are so big that they consume up to 300 pounds of crops.

As for their diet, these beasts mainly consume hay, grass, and legumes. Elephants have strong trunks that can break and allow them to eat tree matter, such as tea branches.

However, these large mammals’ diets are not limited to greeneries and trees. They also have an appetite for crops like fruits and vegetables.

Among the list of their dietary selection, coconut is one of their fruits. Elephants use their body weight and strength to break open coconuts.

These large mammals will start stepping on the coconut. They place the fruit on the mud to prevent it from cracking open immediately.

Elephants step in the coconut to soften the hard casing. After stepping on the coconut a few times, these large mammals will start biting it to access the content.

The sun bear is the smallest in the specie, standing on average 70 centimeters and weighing around 55 to 143 pounds.

This tiny beast lives in the tropical forests of Southeast Asia, which explains its diet and love for fruits.

Sun bear is an omnivore, which means they also eat meat. This bear primarily hunts for small rodents, termites, and insects.

When the sun bear is in the mood for something sweet, it will pick on fruits or rip open honey hives.

Using their sharp claws, this bear can easily split the beehive. The sun bear will extract the honey inside the hives with their long tongues.

Also, using their sharp claws and teeth, these sun bears can rip open a coconut.

This insect grows up to 15 centimeters, almost the size of a coconut. Though, the rhinoceros beetle does not entirely eat coconut only. It also consumes leaf litter, plants, logs, nectar, and sap.

The rhinoceros beetle is considered a pest for destroying coconut and palm crops. The disturbance of this insect stunts the growth of the said plants.

Although this beetle has an appetite for fruits, it apparently has more interest in eating the coconut tree sap. The rhinoceros beetle will go top of the tree, where it feeds itself on the plant fluid.

The beetle eating the sap damages the tree’s growing tissue. Not only the rhinoceros beetle has been infesting coconut trees, but also its larvae.

As its name suggests, coconut crabs have a huge appetite for coconuts. Also known as palm thief, this decapod is the largest terrestrial arthropod.

As for their diet, coconut crabs feast on fallen fruits, seeds, and nuts. Interestingly, these crabs are not herbivores.

Coconut crabs prey on rats and, surprisingly, migratory birds. They even attack during nighttime and grab anyone on their path.

These decapods may only attack in self-defense against humans. In the end, coconut crabs are more interested in eating coconut meat.

Coconut crabs’ diet is mainly the coconut’s soft white meat. To open coconuts, they use their pincers.

Their pincers have a serrated edge that acts as teeth. With their grip, coconut crabs can produce 742 pound-force, more than enough to open a coconut and cut off your finger.

Humans have different diets. Some are omnivores, while others pursue vegetarian diets. But regardless, most of us will agree that we enjoy eating one or more fruits.

Related: What Animals Only Eat Plants?

Generally, the surroundings and climate affect humans’ diet and preferences. For example, people from Alaska eat reindeer sausage and king crab legs, which are common in their area.

As for people in their tropical regions, they have better vegetation. They can plant more variety of fruits, vegetables, and grains.

One of the fruits that represent tropical areas is coconut. There are different variants of coconut, such as Fiji dwarf coconut and Maypan coconut.

Humans drink coconut water and eat coconut meat. We were also able to find a way to preserve coconut better for mass production.

Besides consuming its contents, coconut husks are also used for different materials, such as rope and brushes.

Fruit bats, scientifically known as Pteropodidae, are tropical bats. They are distinguished from other bats with their dog-like features.

Although looking like small predators, fruit bats’ diet consists of fruits, berries, and leaves. These flying mammals will pick the fruits and fly back to their nests.

It seems that fruit bats have an intense craving for mangoes, wild dates, and bananas. However, they are also spotted to have a liking for coconuts.

Fascinatingly though, fruit bats are keener in sampling the coconut flowers. To be fair, these mammals are flower and nectar-eater.

With this diet, these bats are pollinators like bees. So it makes sense why fruit bats prefer flowers instead of fruit.

Although these bat species are fruit-eating animals, the coconut fruit is something they are undecided about adding to their diet. They do not have the strength to open a coconut.

Sticking on the coconut flowers has been working well for them.

The last members on our list of animals that eat coconuts are rats.

Generally, rats are considered pests in different parts of the world. These rodents attack healthy crops or scavenge through our trash.

Rats are seen as filthy and carry bacteria and viruses. They are omnivores, making them capable of eating anything from fruits to insects.

However, considering their size and strength, these rodents rely on their small nibble teeth to make a hole. Rats on the atoll of Tokelau have a diet that mainly consists of coconut.

In 2010, a newly-discovered giant rat named Vangunu was discovered in the Solomon Islands. This giant rodent can crack open a coconut with its teeth.

Unlike other rats that nibble to create holes, Vangunu can break open coconuts. They enjoy eating coconut meat and drinking coconut water.